Accessibility links
As Vape Technology Has Evolved, So Have Potential Risks, Scientists Warn : Shots - Health News The technology behind e-cigarettes has changed over the years, and researchers are now finding evidence that the way different sorts of vaping devices and e-liquids interact could harm consumers. 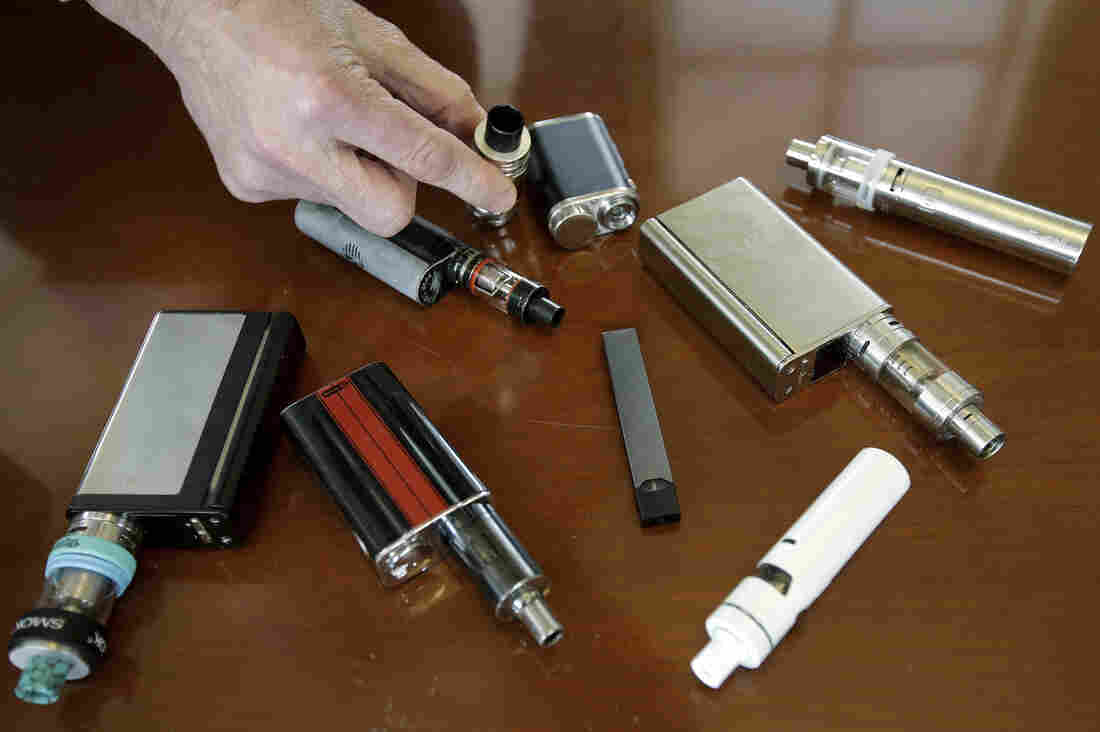 Vaping devices now come in many shapes and sizes; these were confiscated from students by a high school principal in Massachusetts in 2018. Steven Senne/AP hide caption 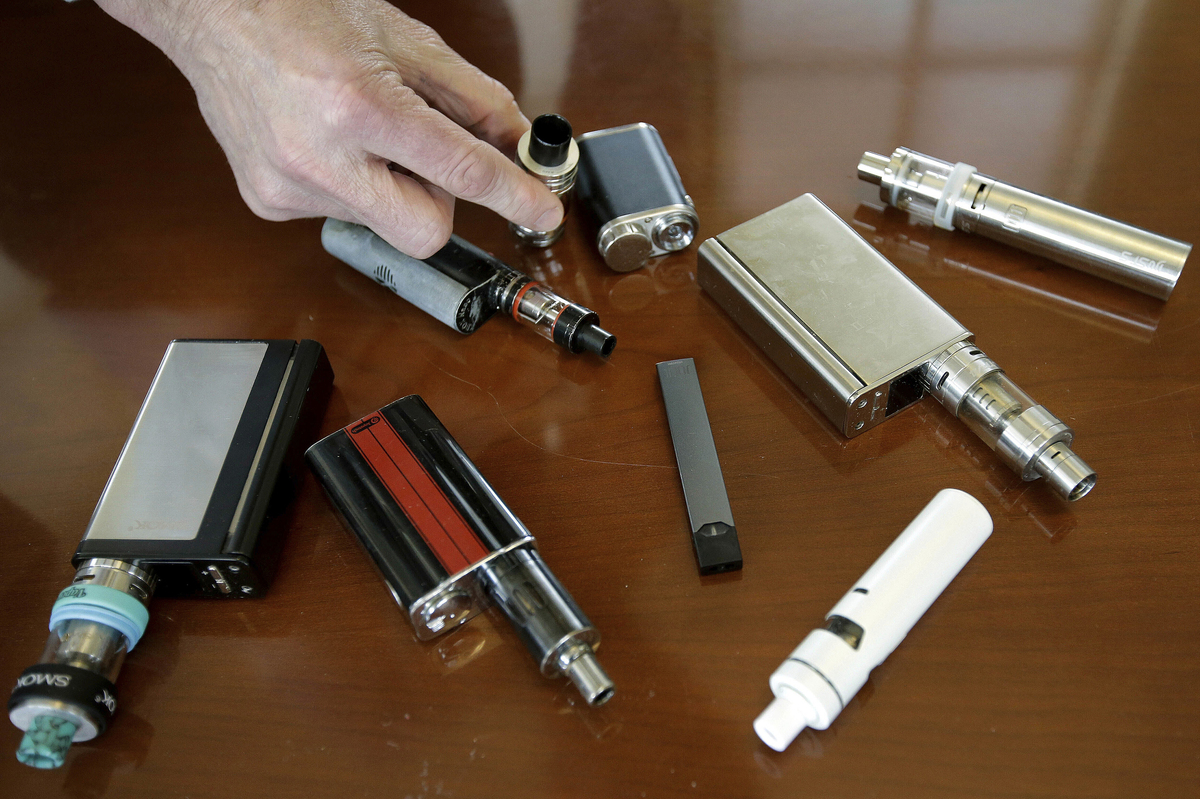 Vaping devices now come in many shapes and sizes; these were confiscated from students by a high school principal in Massachusetts in 2018.

Some consumers credit vaping and electronic cigarette products with helping them kick their cigarette habit. But the technology behind the devices, as well as the e-liquids they use, has changed over the years ― and with little standardization, health researchers say.

"Nobody knows what's in any of these products," says Stanton Glantz, director of the Center for Tobacco Control Research and Education at the University of California, San Francisco. "What you're actually exposing yourself to is not in any way, shape or form standardized."

The smokeless tobacco industry that began with low-voltage cigarette look-alikes has evolved to include customized, high-wattage devices capable of generating enormous clouds of vapor — and potentially harmful substances.

Technological advances have produced devices that ramp up the heat and the concentration of chemicals delivered into the lung, Glantz and other researchers warn, and the aerosol that is inhaled may be contaminated with dangerous metals from the device.

The Centers for Disease Control and Prevention has been scrutinizing vape liquids and devices, trying to figure out what specifically is causing the expanding outbreak of vape-related lung illnesses across the U.S. As of Oct. 15, the CDC had identified nearly 1,500 lung injuries related to vaping. At least 33 of those people have died, according to the agency.

Investigators suspect many of the injuries are related to bootleg cartridges laced with THC, the main psychoactive ingredient in marijuana. However, the ingredients and materials that make up these products are often a mystery, even when they are made by legitimate manufacturers.

The first vaping devices likely were introduced to the U.S. from outside the country around 2006, according to a U.S. Customs and Border protection database. The disposable gadgets were typically prefilled and often resembled cigarettes — hence the nickname "cigalikes." They also contained only modest amounts of nicotine and were not very effective in delivering it to consumers.

Later, vape pens entered the market. They were refillable and packed more power than the cigalikes to heat up the e-liquid. The pens also tended to contain more nicotine.

The third generation of devices — mods — were introduced about a decade ago and proved to be a technological and cultural leap for vaping, says Ana María Rule, an assistant professor of environmental health at Johns Hopkins University who researches e-cigarettes. Consumers could personalize mods by altering the battery, heating elements and e-liquid, Rule explains. The device inspired the creation of groups like "cloud-chasers" — vape users who compete at events around the country to make the largest cloud of aerosol.

"They completely changed the scope and the whole culture of vaping," she says.

Consumers who vape this way could inhale much larger volumes of the aerosolized chemicals — including, perhaps, a greater volume of anything toxic — researchers say.

Juul, a rechargeable device that resembles a flash drive, hit the market in 2015. It can't be customized and generally generates a lower voltage than its mod predecessor.

But what Juul lacked in power, it made up for in its nicotine-fortified e-liquid. Each Juul pod contains a concentration of nicotine equal to a pack of cigarettes; that's concerning because nicotine is physically addictive. The company cut the nicotine with benzoic acid to reduce irritation, meaning users could comfortably inhale more of the vapor. Juul ultimately became a runaway success, particularly among young people.

Yet nicotine is far from the only harmful substance vapers may be at risk of inhaling. Studies have found that overheating an e-liquid can cause "thermal decomposition." In some cases, this dismantling of the basic ingredients can create toxic chemicals such as formaldehyde, a cancer-causing agent, says Thomas Eissenberg, a professor of health psychology and co-director of the Center for the Study of Tobacco Products at Virginia Commonwealth University in Richmond.

Overheated or burnt e-liquid can taste bitter, Eissenberg says, but typically consumers have no way to detect a problem.

"It's important to realize it doesn't always taste bad when that thermal degradation has occurred," he says.

Aerosol from e-cigarettes can also be laced with metals that cause pulmonary and neurological health problems, Rule says. One study she co-authored collected e-liquid samples from different parts of 56 e-cigarette devices owned by daily users. The study's findings showed that the fluid sitting in the device and inhaled by the consumer had markedly higher levels of metal than the liquid in the refillable dispenser.

The authors suggest that the device's heating element could be introducing toxic metal substances like chromium, nickel and lead into the e-liquid.

In response to the uncertainty, some states and cities have banned certain items, such as cartridges of flavored e-liquid. And last week, Juul Labs announced it will suspend sales of most of its flavored products, including cucumber, mango and fruit.

Meanwhile, Massachusetts has temporarily banned the sale of all vaping products.

"The U.S. is in the middle of a moral panic right now, and good public health policy rarely flows out of moral panics," Conley says.

A court order issued in July requires the Food and Drug Administration to demand that companies that had e-cigarette products on the market as of August 2016 turn in applications for approval by May 2020. By then, the agency will have to figure out how to evaluate safety of the wide range of devices and e-liquids and how they might interact.

Such products are "not regulated in terms of quality control, market control, anything right now," says Bonnie Halpern-Felsher, who researches tobacco use prevention at Stanford University in California. "It is completely wide open."

Kaiser Health News is a nonprofit editorially independent program of the Kaiser Family Foundation. KHN is not affiliated with Kaiser Permanente.