Accessibility links
States With Legal Cannabis Take A Hard Look At THC Vapes : Shots - Health News Many cases of vaping-related injury seem to involve THC, health officials say. That's led some states to take another look at the safety of the regulated cannabis market, as well as the black market. 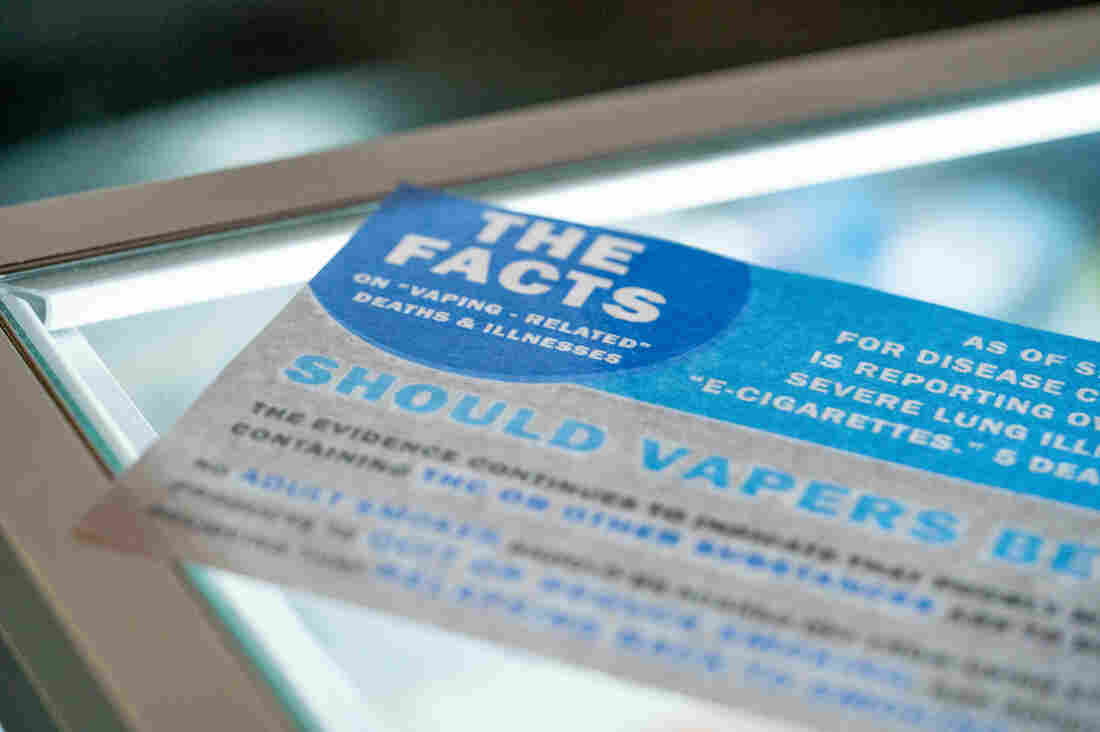 A flyer reminding customers about vaping-related deaths and illnesses, on display in a Seattle vape store. The Washington State Board of Health recently passed a four-month emergency ban on flavored vaping products. It applies to products that contain either THC or nicotine. Jovelle Tamayo/Bloomberg/Getty Images hide caption 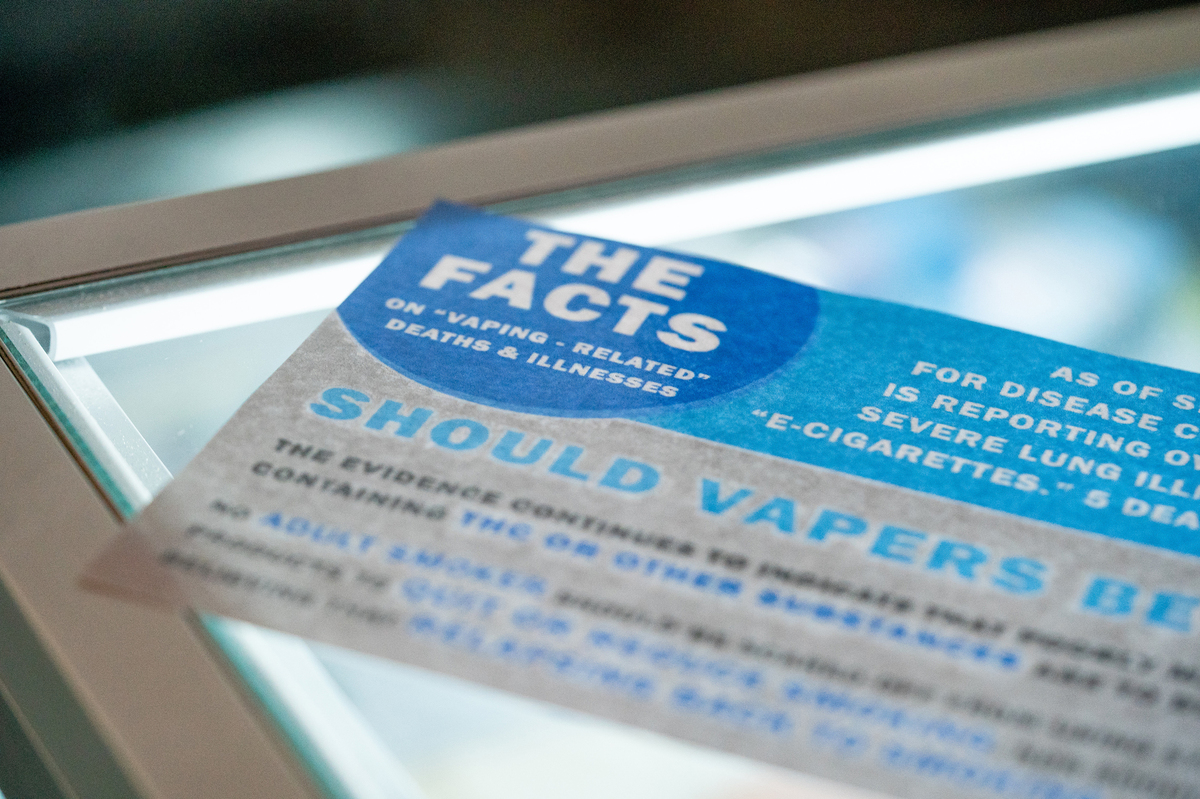 A flyer reminding customers about vaping-related deaths and illnesses, on display in a Seattle vape store. The Washington State Board of Health recently passed a four-month emergency ban on flavored vaping products. It applies to products that contain either THC or nicotine.

Around Washington state, cannabis shops are being required to hang signs warning customers of "severe lung injuries" and "deaths" associated with vaping.

Kevin Heiderich, a co-owner of one such shop, House of Cannabis in Tacoma, Wash., believes the government response to vaping illnesses should focus on the black market.

"Something has just changed and no one really knows what it is," he says.

Still, Heiderich supports more rigorous testing so the regulated market is perceived as safer. This summer, his shops began contacting all their suppliers to verify what's in their products.

He acknowledges some "bad actors" could be selling products on the legal market in Washington.

"Hopefully, that is the exception to the rule, and any regulation that does come down puts an end to those sort of business practices," he says. "We don't need those people in the market."

Health officials nationwide are still puzzling over why some who vape are coming down with a severe respiratory illness and, in some cases, dying. So far, the Centers for Disease Control and Prevention's investigation has identified more than 1,600 cases, but has yet to pinpoint a lone cause that explains all cases.

Many cases have been traced back to vape cartridges filled with THC (the psychoactive ingredient in cannabis) — cartridges the users found on the black market. Some who have gotten ill were vaping both THC and nicotine, according to CDC reports. A smaller percentage report using only nicotine.

"The data do continue to point to THC-containing products as the source of the vast majority of individuals' lung injury," Dr. Anne Schuchat, the CDC's principal deputy director, told reporters at a press briefing Friday.

"There are continuing cases that do not report that history," she said, "but I'd like to stress that we don't know what the risky material or substance is, and THC may be a marker for a way that cartridges are prepared or the way devices are producing harm."

Schuchat said it remains to be seen if that is also happening with devices that contain nicotine — not just THC.

"We are seeing the THC as a marker for products that are risky," she said, "but at this time, because of the continued presence of cases that only report exclusive nicotine-containing e-cigarette or vaping product use, we feel that it is very important for people to consider refraining from use of any kind of e-cigarette."

In response to the CDC's ongoing investigation, a handful of states have banned certain vaping products. States where recreational marijuana is legal are also taking a second look at their regulations.

Some cases of lung injury in Washington and Oregon may be linked to products of the regulated cannabis market, according to local health agencies, raising questions about the safeguards for consumers who vape legal products.

"I could barely breathe"

Charles Wilcoxen, a police officer for the Puyallup Tribe in Washington state, turned to vaping cannabis nearly two years ago. The 44-year-old U.S. Army veteran says he assumed it was a safer alternative to smoking the plant.

Wilcoxen says he would buy the vape cartridges from Washington's legal marijuana shops and use them on his off-duty days to relieve stress.

There was nothing unusual about his vaping routine in September he says — "I used the same device and the same cartridges as I had in the past." 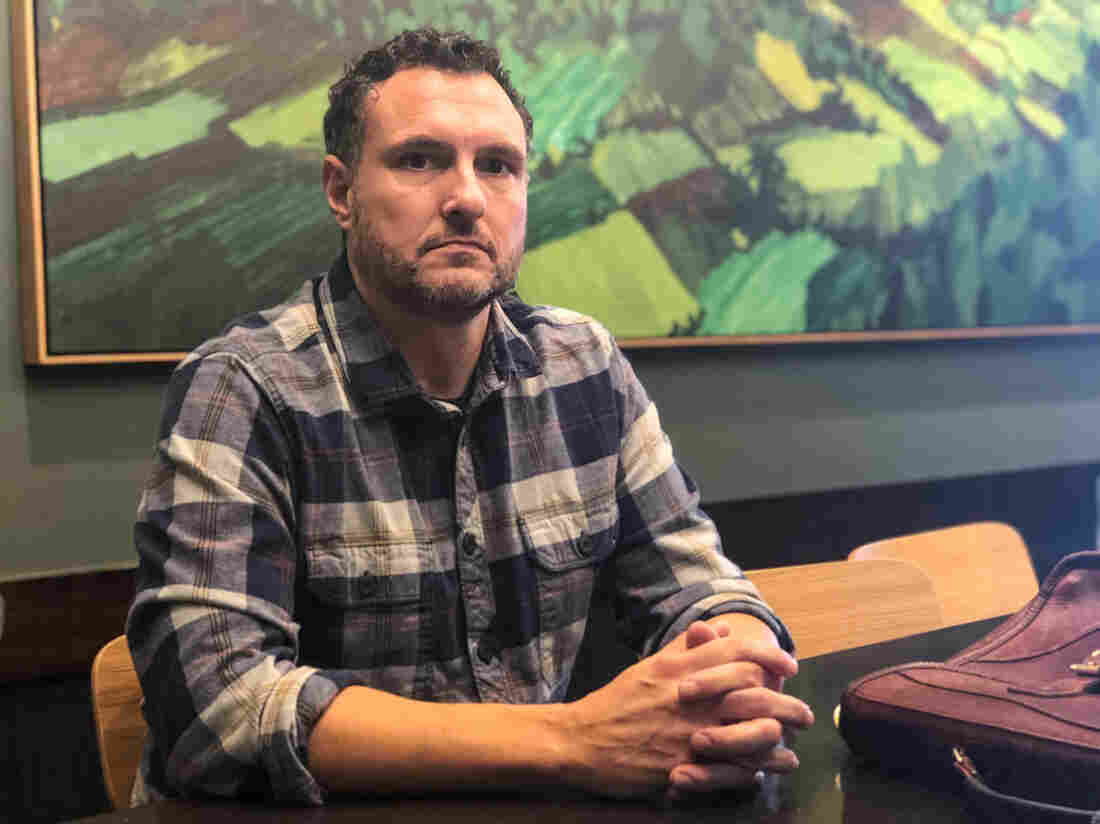 In September, Charles Wilcoxen was hospitalized for three days with a severe respiratory illness after vaping cannabis cartridges he bought at a legal shop. He's now suing a handful of manufacturers and distributors of the products. Will Stone for NPR hide caption 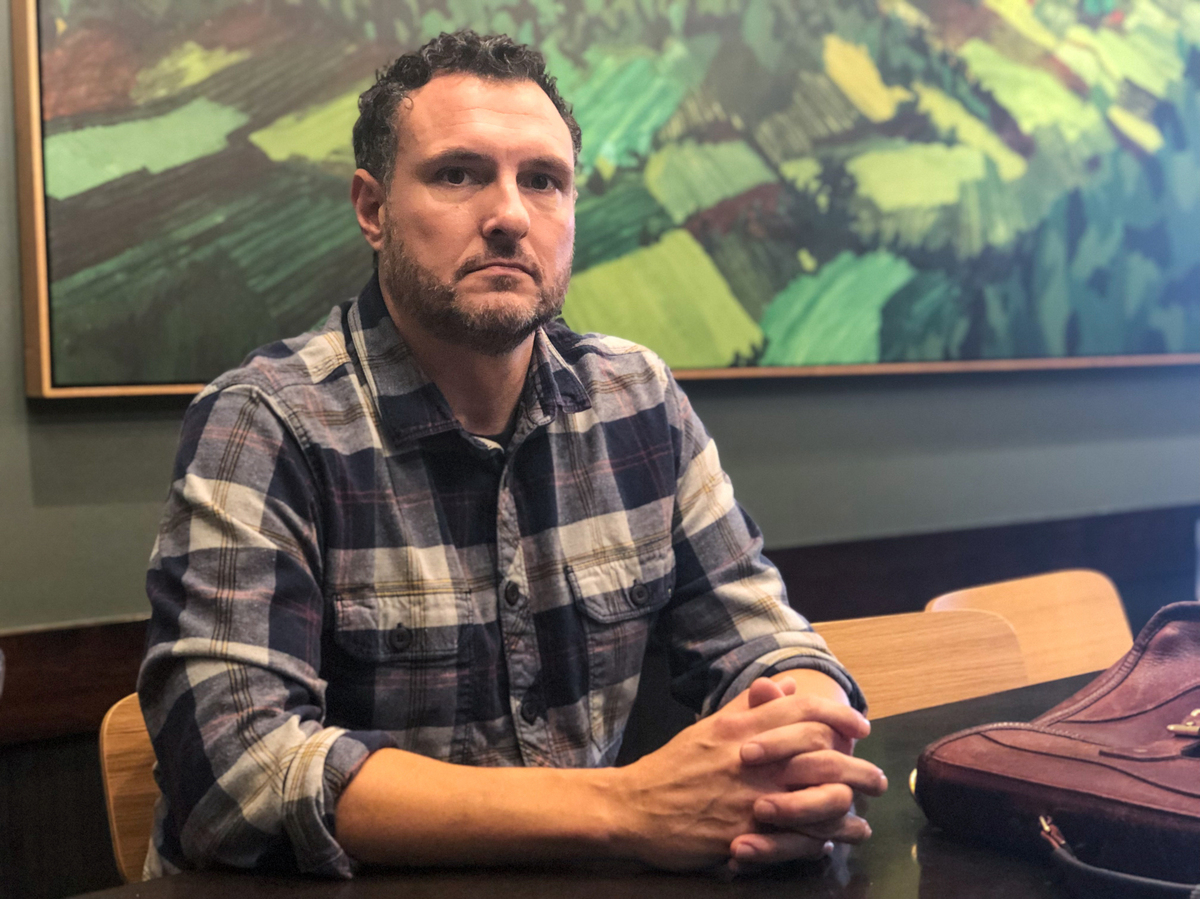 In September, Charles Wilcoxen was hospitalized for three days with a severe respiratory illness after vaping cannabis cartridges he bought at a legal shop. He's now suing a handful of manufacturers and distributors of the products.

But this time Wilcoxen very quickly became sick. Shortly after vaping, he began wheezing heavily. Soon he was nauseated and running a fever.

"I just felt horrible," he remembers. "I tried to get through the weekend and tough it out."

At first, Wilcoxen thought it could be the flu. But then he started to suspect his illness might be related to his vaping. When Wilcoxen woke up one morning and could barely breathe, he decided to go to the emergency room.

"Literally, I would take five steps and have to hunch over and try to catch my breath," he says.

He ended up spending three days in the hospital.

Doctors found a strange build-up in his lungs and sent it for analysis. The results came back positive for lipoid pneumonia — a rare respiratory illness caused by oils or fats entering the lungs. It's one of the vaping-related conditions researchers have identified in others hospitalized in recent months.

Wilcoxen is still recovering and has decided to sue.

His lawsuit alleges that defects in the vaping products led to his illness. He's going after six companies that have a role in manufacturing or distributing the cartridges or the vaping device.

"Buy something off the black market, you are taking your chances," says Mark Lindquist, Wilcoxen's attorney. But customers who buy their vape products from a state-licensed store, he says, should be able to count on getting a safe product.

Testing standards for cannabis vary across the legalized market in the U.S.

The state of Washington requires that vape products sold in stores be checked for, among others things, potency, toxins and residual solvents used in the extraction process. Some states, including California, go even further and mandate testing for other substances, such as pesticides.

These regulations, however, don't necessarily require checking for other potentially harmful chemicals that sometimes find their way into vape cartridges on the black market and could, conceivably, turn up in legal cartridges, too. 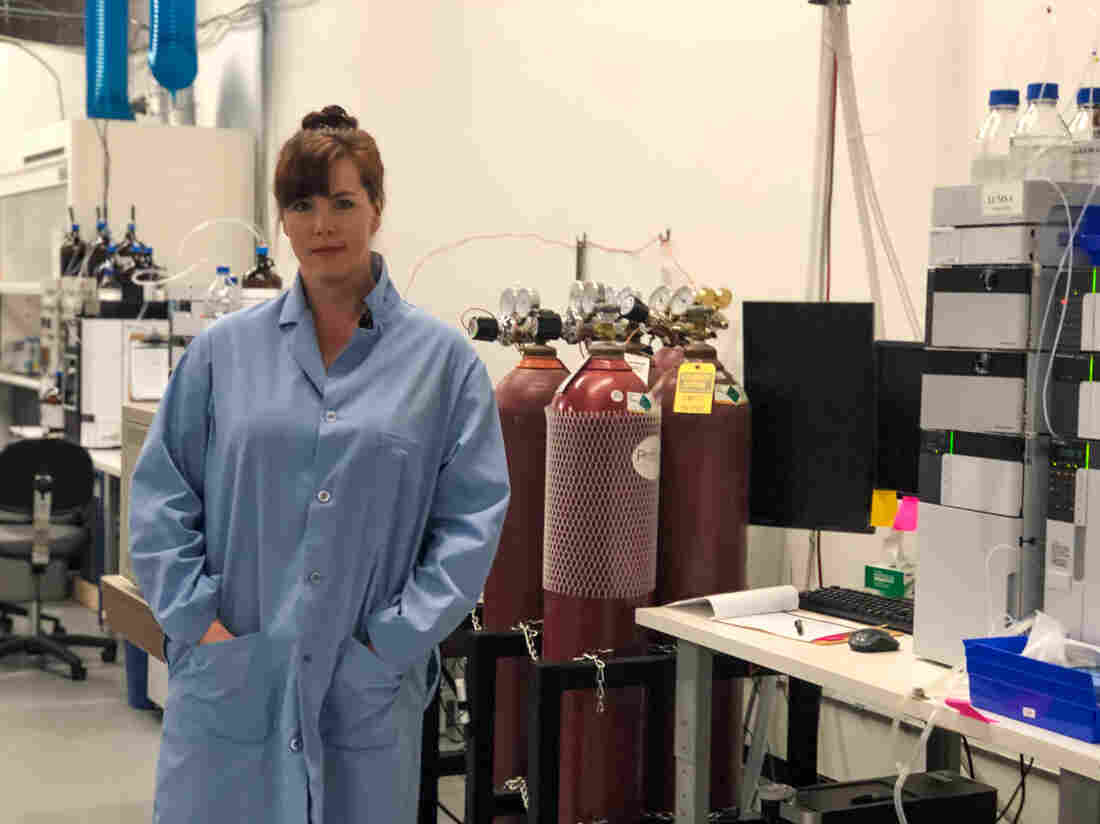 Shannon Stevens is laboratory director for Washington-based Confidence Analytics, which tests cannabis products before they are solid in licensed retail shops. Will Stone for NPR hide caption 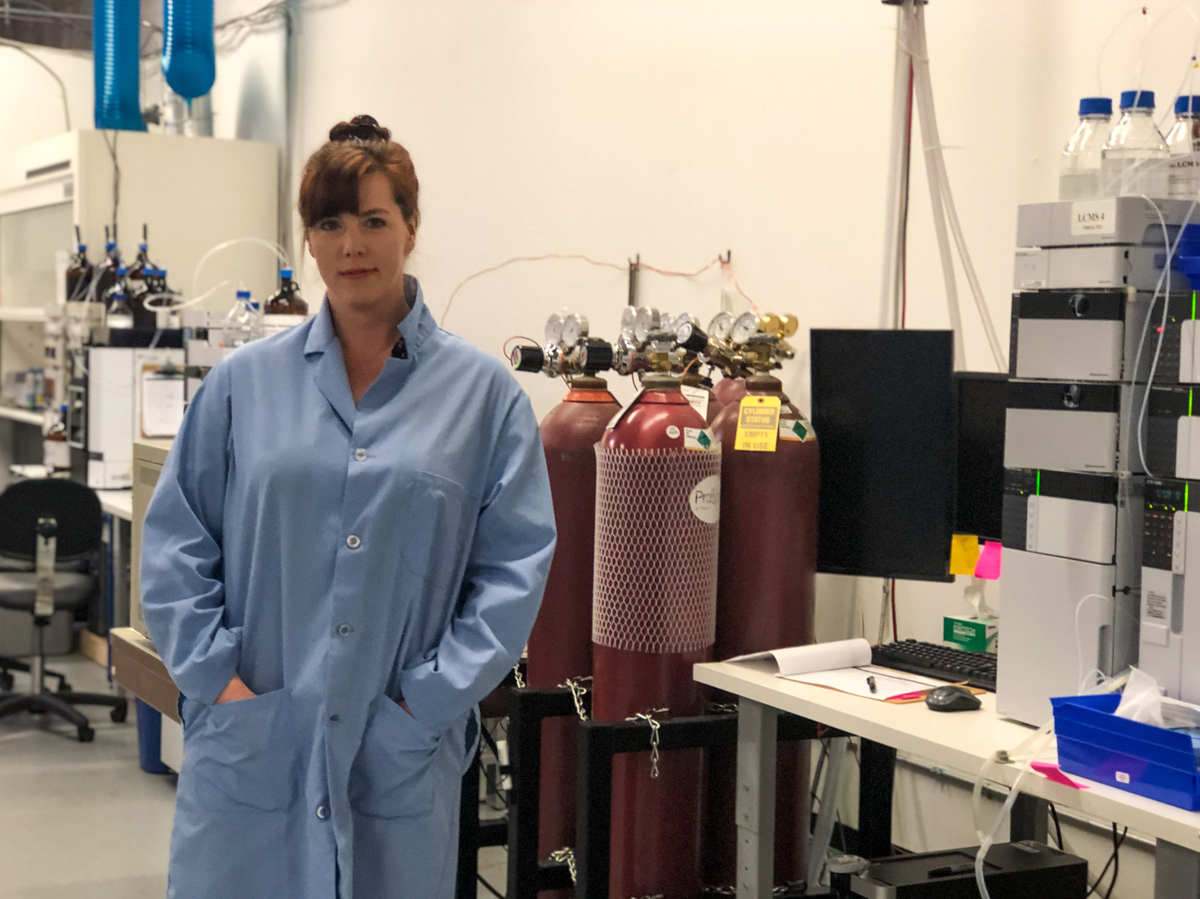 Shannon Stevens is laboratory director for Washington-based Confidence Analytics, which tests cannabis products before they are solid in licensed retail shops.

Shannon Stevens, laboratory director for Confidence Analytics, which has a state license to test cannabis products in Washington, says a cutting agent is typically used to dilute the THC oil in the black market supply.

"There is no requirement to test for any sort of cutting agent," Stevens says.

In recent months, more customers have been asking her laboratory to test for Vitamin E, out of concern for its possible role in the vaping-illness outbreak.

Stevens says she'd be "surprised" to discover Vitamin E in one of the products sold in Washington's legal retail stores. "But I definitely wouldn't exclude the possibility," she says, "because there are no checks on that right now."

In an effort to identify harmful chemicals, Washington state regulators are collecting information from cannabis companies that make vaping products.

In the meantime, the Washington State Board of Health recently passed a four-month emergency ban on flavored vaping products, which applies to both nicotine and THC.

"We aren't waiting for Big Tobacco to tell us what is in their products," Gov. Jay Inslee said, in announcing his executive order to prohibit the sale of certain vaping products.

Inslee's administration is framing the outbreak as yet another symptom of the rise in youth vaping.

Dr. Kathy Lofy, the state health officer for Washington, says a ban on flavored products will discourage young people from vaping in the first place.

"While we don't know yet exactly what is causing severe lung injury, we did like the option of banning flavors because we know the youth are very attracted to flavors," she says.

But the state's public health leaders also acknowledge the ban isn't necessarily a remedy to the current outbreak of illnesses. 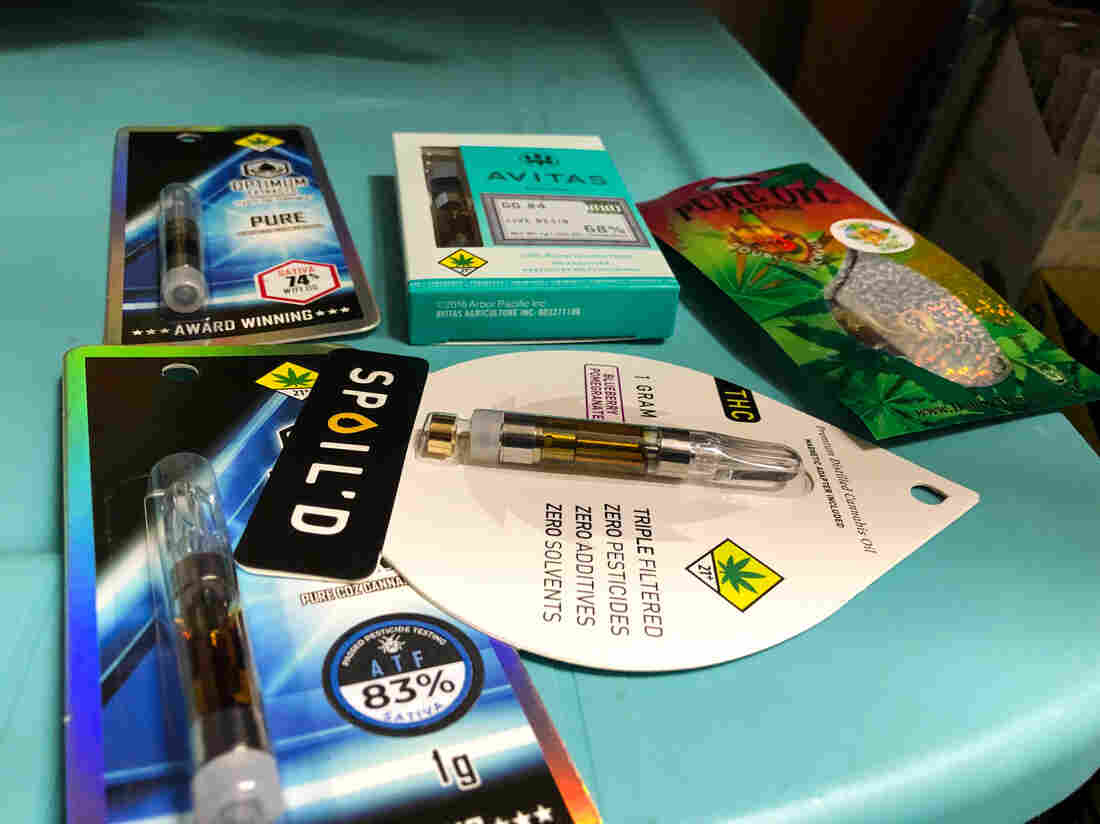 THC vape cartridges are a popular product in Washington's legal marijuana shops. A new ban on flavored versions of marijuana and nicotine vaping products recently went into effect across the state, and will remain in place at least four months. Will Stone for NPR hide caption 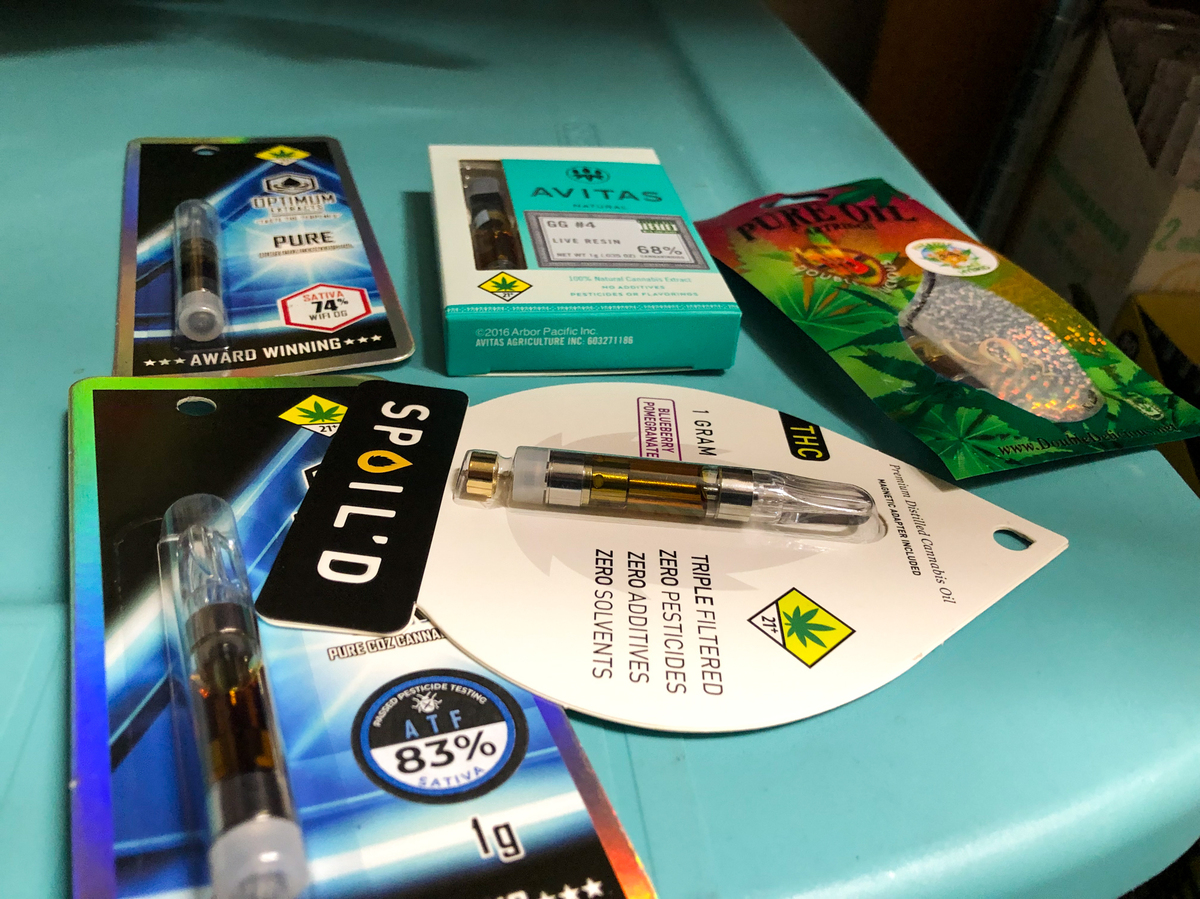 THC vape cartridges are a popular product in Washington's legal marijuana shops. A new ban on flavored versions of marijuana and nicotine vaping products recently went into effect across the state, and will remain in place at least four months.

"We are not saying that the flavors are what are causing this current lung injury or illness," said Washington's Secretary of Health John Wiesman before voting in favor of the ban. "We obviously don't yet know what that is."

Before Washington passed its ban, many from the vape industry criticized the move as heavy-handed and misguided. And some public health experts warn the ban could backfire.

"There is this risk when you ban something [legal] that people will be driven to the black market," says Ziva Cooper, director of the UCLA Cannabis Research Initiative.

Cooper says the regulated cannabis market is already fraught with problems. People walk into a cannabis shop with neatly packaged products and believe everything has undergone rigorous safety testing, she says.

"They think they can trust what's on the labels," says Cooper, "but the truth is the labels don't necessarily accurately portray what's actually in the products."

She says it doesn't help that the public health messaging is all over the place — often lumping together cannabis and nicotine products.

Given all the unknowns about the vaping illnesses, the CDC continues to issue broad warnings about the risks of vaping.

Schuchat says vapers can't assume that some states have a better handle on quality than other states.

This story is part of NPR's partnership with Kaiser Health News, a nonprofit, editorially independent program of the Kaiser Family Foundation. KHN is not affiliated with Kaiser Permanente.

Will Stone is a freelance reporter based in Seattle. He is on Twitter at @wstonereports.