Accessibility links
High-Deductible Health Plans No Longer The Only Option At Many Firms : Shots - Health News Big firms are again offering more generous health plans alongside or instead of policies with sky-high deductibles. Why? They need to do so to stay competitive and recruit top talent. 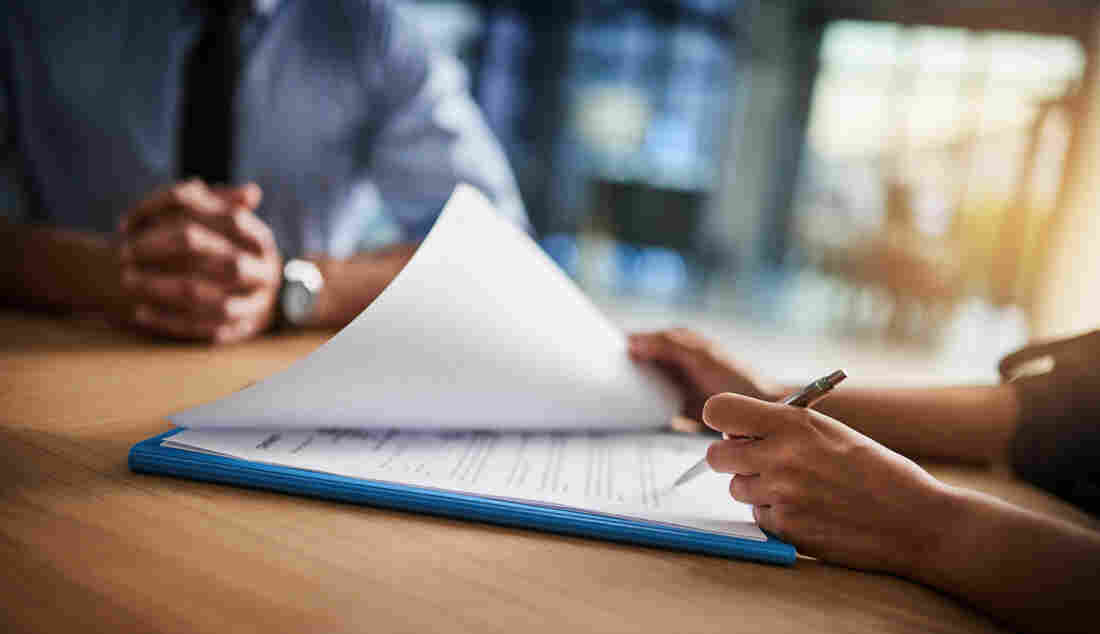 For the third year in a row, the percentage of companies that offer high-deductible plans as the sole health insurance option will decline in 2020, according to a survey of large employers by the National Business Group on Health. PeopleImages/Getty Images hide caption 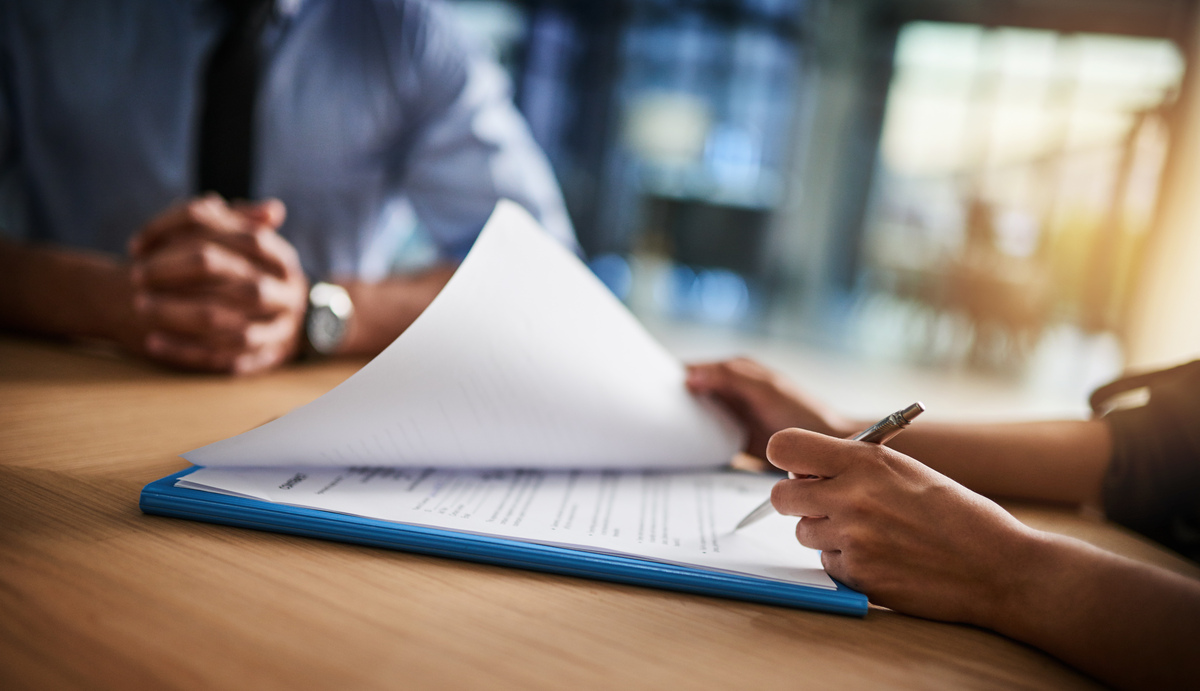 For the third year in a row, the percentage of companies that offer high-deductible plans as the sole health insurance option will decline in 2020, according to a survey of large employers by the National Business Group on Health.

Everything old is new again. As open enrollment gets underway for next year's job-based health insurance coverage, some employees are seeing traditional plans offered alongside or instead of the plans with sky-high deductibles that may have been their only choice in the past.

Some employers say that in a tight labor market, offering a more generous plan with a deductible that's less than four figures can be an attractive recruitment tool. Plus, a more traditional plan may appeal to workers who want more predictable out-of-pocket costs, even if the premium is a bit higher.

Employees Start To Feel The Squeeze Of High-Deductible Health Plans

Four years ago, faced with premium increases approaching double-digit percentages, Digital River ditched its traditional preferred provider organization plan in favor of three high-deductible plans. Each had different deductibles and different premiums, but all linked to health savings accounts that are exempt from taxes.

This year, though, the company added back two traditional preferred provider plans to its offerings for workers.

Even with three plan options, "we still had employees who said they wanted other choices," says KT Schmidt, the company's chief administrative officer.

Digital River isn't the only company broadening its offerings. For the third year in a row, the percentage of companies that offer high-deductible plans as the sole option will decline in 2020, according to a survey of large employers by the National Business Group on Health. A quarter of the firms polled will offer these plans as the only option next year — down 14 percentage points from two years ago.

That said, high-deductible plans are hardly disappearing. Fifty-eight percent of covered employees worked at companies that offered a high-deductible plan with a savings account in 2019, according to an annual survey of employer health benefits released by the Kaiser Family Foundation last month.

That was second only to the 76% of covered workers who were at firms that offered a PPO plan. (Kaiser Health News is an editorially independent program of the Kaiser Family Foundation; it is not affiliated with Kaiser Permanente.)

When Digital River switched to exclusively high-deductible plans for 2016, the firm put some of the $1 million it saved into the new health savings accounts that employees could use to cover their out-of-pocket expenses before reaching the deductible.

The company put a lot of effort into educating employees about how the new plans work, Schmidt says. Premiums are typically lower in high-deductible plans. But under federal rules, until people reach their deductible, the plans pay only for specified preventive care, such as annual physicals and cancer screenings, and some care for chronic conditions.

Enrollees are on the hook for everything else, including most doctor visits and prescription drugs. In 2020, the minimum deductible for a plan that qualifies under federal rules for a tax-exempt health savings account is $1,400 for an individual and $2,800 for a family.

As their health savings account balances grew, "more people moved into the camp that could see the benefits" of the high-deductible strategy, Schmidt says. Still, not everyone wanted to be exposed to costs upfront, even if they ended up spending less overall.

"For some people, there remained a desire to pay more to simply have that peace of mind," he says.

Digital River's PPOs have deductibles of $400 and $900 for single coverage and $800 and $1,800 for families. The premiums are significantly more expensive than those of the high-deductible plans.

But costs are more predictable in the PPO plan. Instead of owing the entire cost of a doctor visit or trip to the emergency room until they reach their annual deductible, people in the PPO plans generally owe set copayments or coinsurance charges for most types of care.

When Digital River introduced the PPO plans for this year, about 10% of employees moved from the high-deductible plans to the traditional plans.

Open enrollment for 2020 starts this fall, and the company is offering the same mix of traditional and high-deductible plans again for next year.

Adding PPOs to its roster of plans not only made employees happy but also made the company more competitive, Schmidt says. Two of Digital River's biggest competitors offer only high-deductible plans, and the PPOs give Digital River an edge in attracting top talent, he believes.

According to the survey by the National Business Group on Health, employers that opted to add more choices to what they offered employees typically chose a traditional PPO plan. Members in these plans generally get the most generous coverage if they use providers in the plan's network.

But if they go out of network, plans often cover that as well, though they pay a smaller proportion of the costs. For the most part, deductibles are lower than the federal minimum for qualified high-deductible plans.

"Some of the newer strategies that employers want to try just aren't [health savings account] compatible," says Watts. The firms might want to pay for care before the deductible is met, for example, or eliminate employee charges for certain services.

Examples of these strategies could include employer-subsidized telemedicine programs or direct primary care arrangements in which physicians are paid a monthly fee to provide care at no cost to the employee.

'Cadillac Tax' On Generous Health Plans May Be Headed For Repeal

The "Cadillac tax," a provision of the Affordable Care Act that would impose a 40% excise tax on the value of health plans that exceeded certain dollar thresholds, was a driving force behind the shift toward high-deductible plans. But the tax, originally supposed to take effect in 2018, has been pushed back to 2022. The House passed a bill repealing the tax in July, and there is a companion bill in the Senate.

It's unclear what will happen, but employers appear to be taking the uncertainty in stride, says Brian Marcotte, president and CEO of the National Business Group on Health.

"I think employers don't believe it's going to happen, and that's one of the reasons you're seeing [more plan choices] introduced," he says.