Accessibility links
Children At Risk Of Type 1 Diabetes Get Limited Screenings In Large Trial : Shots - Health News Children of parents with Type 1 diabetes have an elevated risk of getting the disease. For some families, a trial that provided annual screenings gave them information to prepare for the worst.

A Trial For Kids At Risk Of Type 1 Diabetes Was Scaled Back, Leaving Families In Limbo

A Trial For Kids At Risk Of Type 1 Diabetes Was Scaled Back, Leaving Families In Limbo 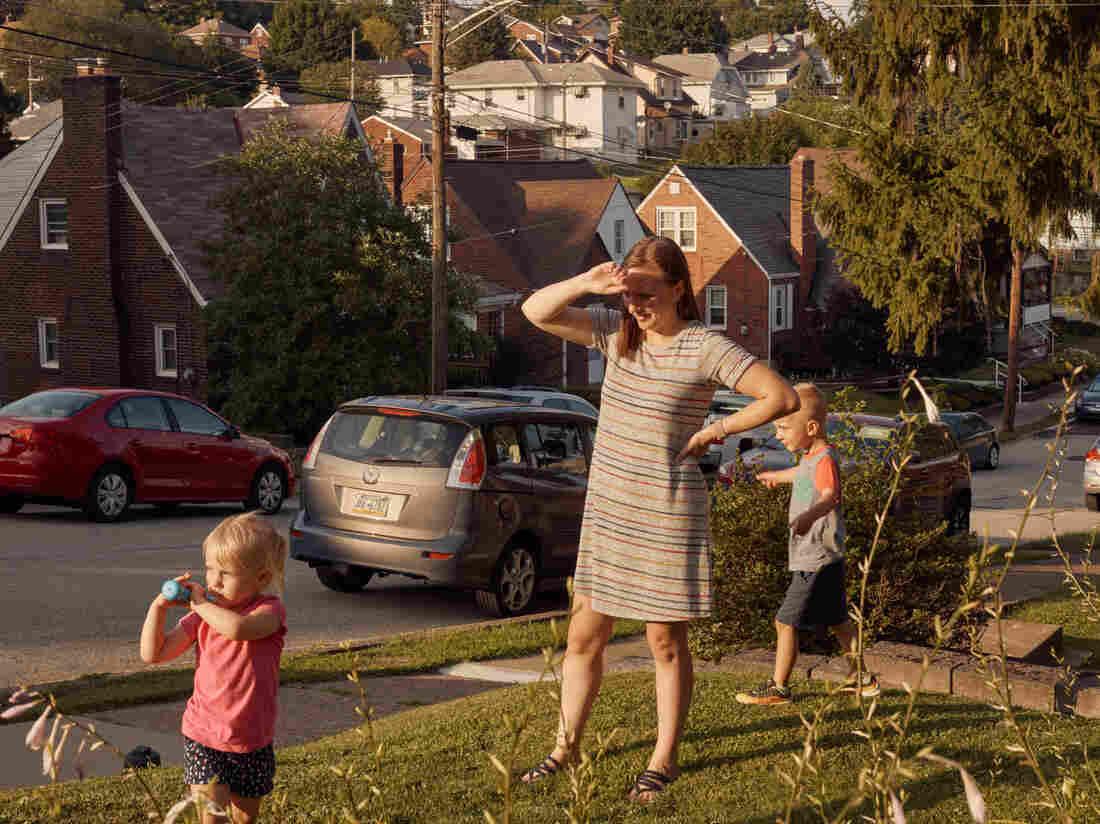 Sarah Zuger, who has Type 1 diabetes, with her children, Elsie and Liam, at their home in Munhall, Pa. Liam tested positive for antibodies that indicate high risk for developing Type 1 diabetes. Ross Mantle for NPR hide caption

At first, 19-year-old Sarah Hornak ignored the tingling in her hands and feet. She also ignored the 20 pounds of weight she shed, the constant hunger and thirst, the time she threw up after a tough workout. She went to her doctor only when she began to see halos everywhere. A pinprick on her finger revealed that her blood sugar was in the 400s — about four times as high as a healthy person's should be. She checked into the hospital and was diagnosed with Type 1 diabetes within days.

It has been nearly 15 years since she learned she has the disease, a condition in which the body's immune cells attack the pancreas, the gland that regulates blood glucose levels by secreting insulin. What causes Type 1 diabetes and how to stop it are still a mystery.

Having a family history is one risk factor: A child with no affected relatives has a 1 in 300 chance of developing Type 1 diabetes. With an affected parent, the odds spike to 1 in 20. So when Sarah (whose last name is now Zuger) learned about a clinical trial to screen patients' children for their risk of developing the disease, she decided to enroll her own infant son, Liam, at 18 months old to "have peace of mind."

The trial, called TrialNet, is run by an international consortium of researchers who aim to understand how Type 1 diabetes develops over time and to find ways to halt its progression. One arm of the trial, Pathway to Prevention, includes participants like Liam, who have blood samples drawn annually and are screened for five proteins that help predict whether their immune system has begun to recognize the pancreas as foreign. These proteins, known as antibodies, accumulate over time and begin to destroy the pancreas' insulin-producing cells.

Zuger at her home in July. Zuger was diagnosed with Type 1 diabetes at 19. Ross Mantle for NPR hide caption

The Zugers and many other families have come to rely on the trial to help them manage the stress of raising children at elevated risk for the disease. Armed with knowledge from the study, they're more prepared to avoid the life-threatening medical emergencies that a diagnosis of diabetes can bring. And they're excited to help in research to find a cure or preventive treatment. But funding cuts this year reduced families' access to the annual tests and left parents in limbo, unsure how to access the early screening they were told is critical to their children's future health.

Changes to a successful trial

TrialNet researchers have screened more than 160,000 participants since 1994 and have discovered a wealth of information about Type 1 diabetes. For example, they found that the disease occurs in three distinct stages; the first is when antibodies begin to form.

After a child develops two or more antibodies, the odds of getting a Type 1 diabetes diagnosis are "overwhelming," says Carla Greenbaum, an endocrinologist at the Benaroya Research Institute in Seattle and the chair of TrialNet.

The progression from having antibodies to developing the disease is so strong, in fact, that Greenbaum draws a parallel with having high blood pressure and experiencing a stroke. Hypertension itself is not a disease. But high blood pressure raises the risk of stroke so much that doctors prescribe pills to treat the risk itself — they don't wait for a stroke to occur. The number of patients with multiple antibodies who will develop Type 1 diabetes is much higher than those with untreated hypertension who'll have a stroke or heart attack, Greenbaum says.

Unlike with blood pressure, there's nothing a doctor can currently do to prevent or cure Type 1 diabetes. Catching at-risk kids early — via screening studies — helps parents, who can then choose whether to enroll their children in trials for possible cures or to simply wait and watch.

TrialNet studies are also exploring possible cures. Most recently, researchers identified a drug named teplizumab that can delay the onset of the disease. It's far from a cure — yet it's the first report of any medicine that can even stall Type 1 diabetes. Teplizumab is now being studied in phase 3 trials.

But when one of the study's funders, the National Institute of Diabetes and Digestive and Kidney Diseases, scaled back support for the trial in March, that forced researchers to redefine who can participate. Until then, children could be screened as early as age 1 and were eligible for annual screenings until they turned 18. Now, testing begins only at age 2 1/2. And a child who tests negative for all five antibodies once will not be screened again.

"The changes are going to limit our ability to screen people as freely as we did in the past," says Michael Haller, a pediatric endocrinologist at the University of Florida who's also a TrialNet researcher. Haller and others raised concerns about losing the network of physicians and patient families they've developed over the years.

The new guidelines also controvert the findings of a study published in 2011 by TrialNet researchers. Based on data from more than 32,000 children of affected parents, that study supported annual screening for children under age 10 and an additional screening during adolescence as the most cost-effective way to identify the disease early. In other studies, researchers report that children who are monitored for Type 1 diabetes fare better. Because their condition is detected early, they're less likely to suffer diabetic ketoacidosis, a complication in which acids accumulate in blood because of a lack of insulin, and wind up in hospital emergency rooms.

"It's a complete guessing game"

Liam Zuger had no antibodies when he was first tested in 2015. He would not have been rescreened under the revised guidelines. But his next test, just a year later, detected two of the five proteins. Liam's chances of unexpectedly suffering sky-high blood sugar levels — and the resulting race to an emergency room — had just shot up.

"Finding that out was possibly the worst moment of my life," Sarah Zuger says. "But I was happy that we decided to do the screening and we were getting ahead of it."

By age 4, Liam had developed all five proteins and was enrolled in a TrialNet study for a drug that might delay or halt the disease. When the Zugers' daughter, Elsie, was born two years ago, the couple didn't think twice about having her screened. Elsie has tested negative so far, but the family has no way to monitor her future risk. 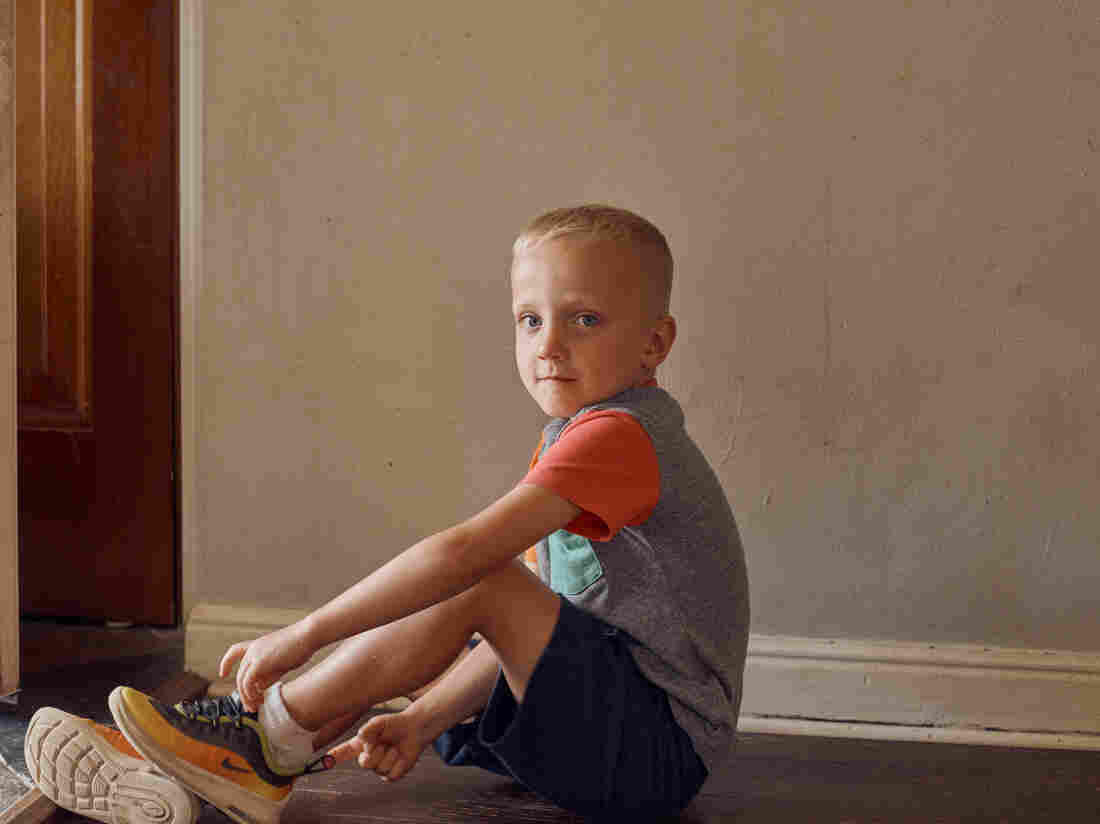 Liam Zuger puts on his shoes before going outside to play with his family. By age 4, Liam had developed all five proteins that indicate he's at high risk of developing Type 1 diabetes. Ross Mantle for NPR hide caption

"It just seems unfair," says Sarah's husband, Jeremy Zuger. "With Liam, we had this warning that it was probably going to happen within a certain window of time. It's a complete guessing game for Elsie."

TrialNet researchers point out that the screening is part of a research study, not a service provided to patients in the clinic. Just as patients can choose to leave a clinical trial, a trial can drop patients for varied reasons — including if the trial loses funding. These circumstances are explained to patients in informed-consent forms.

The current changes are not unethical and are compliant with standard research guidelines, says bioethicist Emma Tumilty, a lecturer at Deakin University's School of Medicine, in Australia. But parents are still upset. "That's understandable," she says. "Nothing unethical has occurred in terms of regulatory standards — but those are a minimum bar of ethical practice and not what we might expect as a society in terms of researchers' fulfilling their obligations to participants."

People tend to look at informed consent as the "terms of service on a website — they're aware it exists, but they disregard it," says Tumilty. "So there's a general risk they might mistake research for clinical treatment." But TrialNet chair Greenbaum says the changes to screening access were based on data gathered so far that suggest only about 2% to 5% of children who test negative once will go on to form the risk-causing antibodies later. In other words, the children who no longer meet TrialNet's new criteria have a very, very low risk of getting Type 1 diabetes. 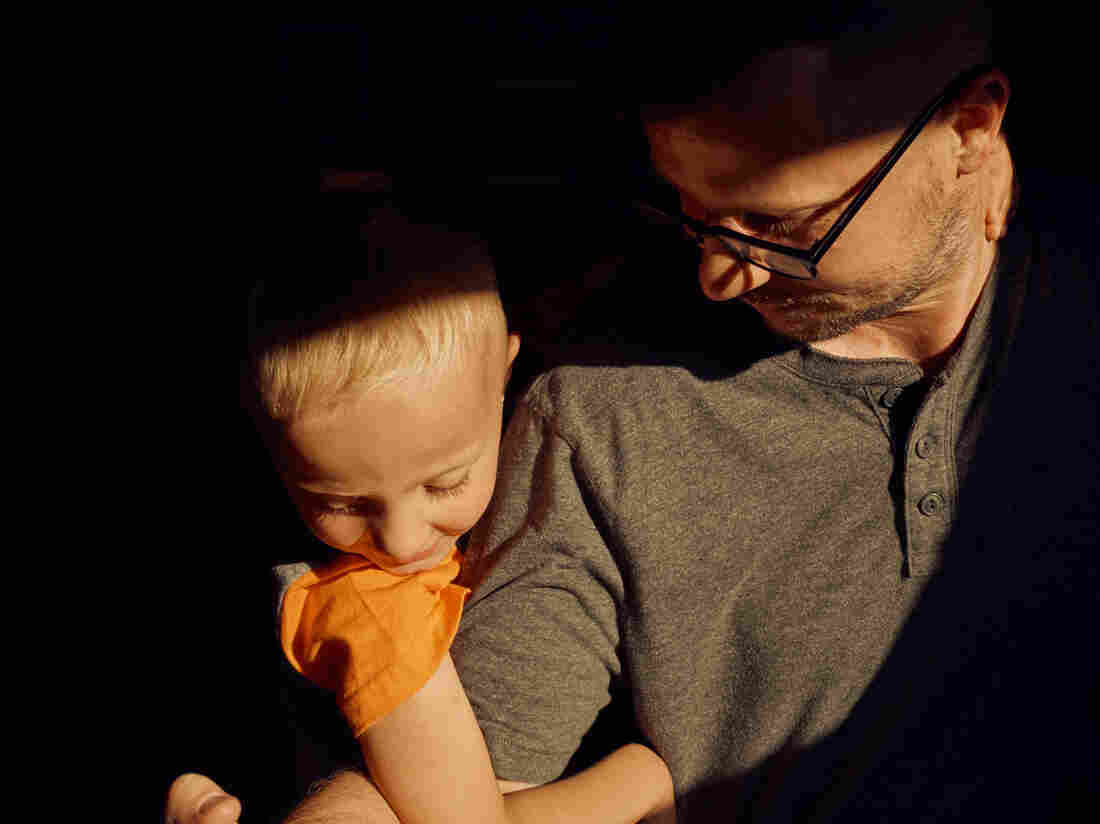 Jeremy Zuger with his son, Liam, in their home. Ross Mantle for NPR hide caption

"We need to have a sustainable process to identify people and put them in trials," she explains. "We have rescreened patients in the past, and that's one of the ways we've learned about whether it makes sense to continue to do that."

But the odds of developing antibodies later are higher in younger children, says Dorothy Becker, a pediatric endocrinologist at the Children's Hospital of Pittsburgh, who's also a TrialNet researcher.

"If a child tests negative at a young age, say around 3 or so, there's more of a chance of still getting the disease," Becker says. "Once kids hit pre-puberty, the chances of getting antibodies are much smaller, although it can still happen."

Recruiting and screening patients, even in the face of reduced funding, is essential to TrialNet's success. Without patients such as Liam and the parents who bring their children back each year, it would have been impossible to discover teplizumab, the drug that can delay the start of Type 1 diabetes. So the TrialNet website, Facebook page and other communications continue to encourage patients to screen their children. As the website declares: "Detecting the disease at its earliest stage is super important." 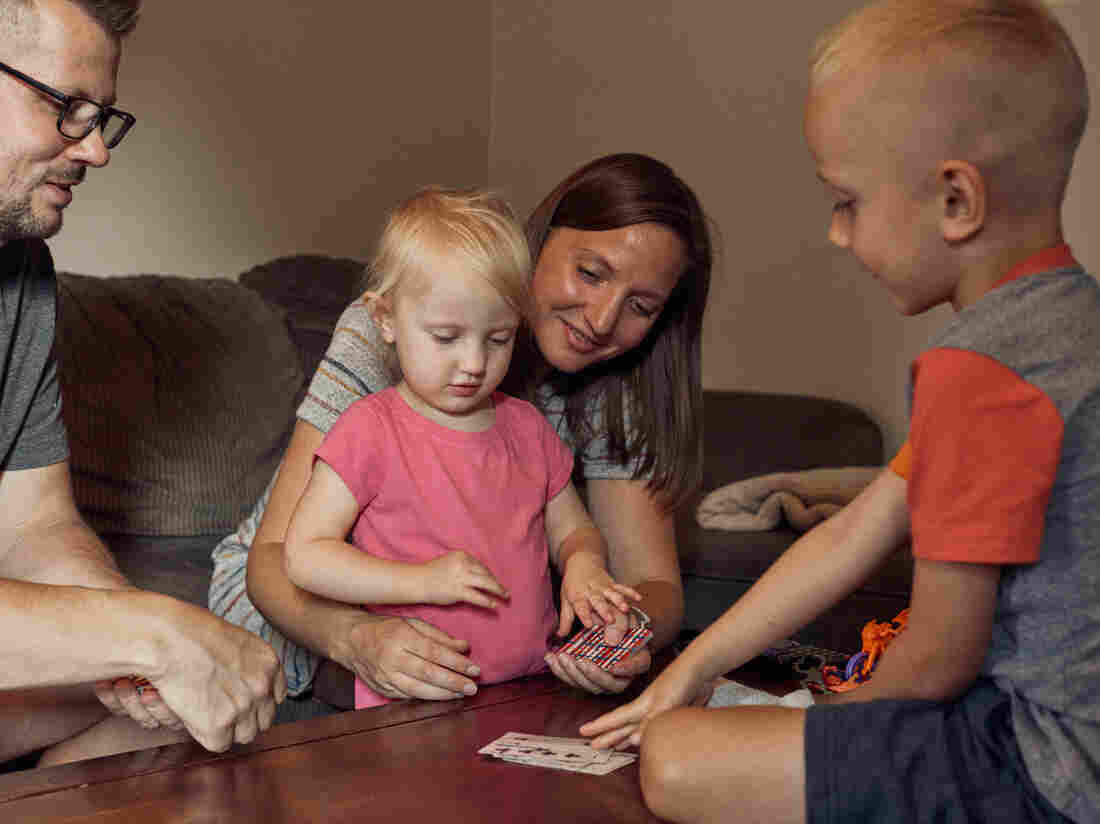 Sarah and Jeremy Zuger at home with their children, Elsie and Liam. Ross Mantle for NPR hide caption

Communications like this, says bioethicist Kelly Hills of consulting firm Rogue Bioethics, could make it "very easy for participants to feel confused" and think of the screening as a clinical test.

And these public communications are perhaps why parents are upset over the new screening guidelines, Tumilty says. She adds that although TrialNet is a research study, the notice about new screening criteria could have been clearer about the implications for patients' health and their alternatives for continued rescreening if they wanted it. When TrialNet shared the update on Facebook, commenters responded by saying they would reach out to their primary care doctors to ask about alternatives. TrialNet's response to this community was to request people to get in touch with the study with their results if they tested positive for the antibodies.

Such communications "blur that line between the clinical and research settings," Tumilty says. "People will find it very hard not to mistake research for clinical treatment."