Accessibility links
As Big Tobacco Defends Itself In Court, It Gets Help From Academics : Shots - Health News Faced with lawsuits from sick smokers, tobacco firms argue the health risks were "common knowledge" for decades, and they often pay professors to help make that point as expert witnesses. 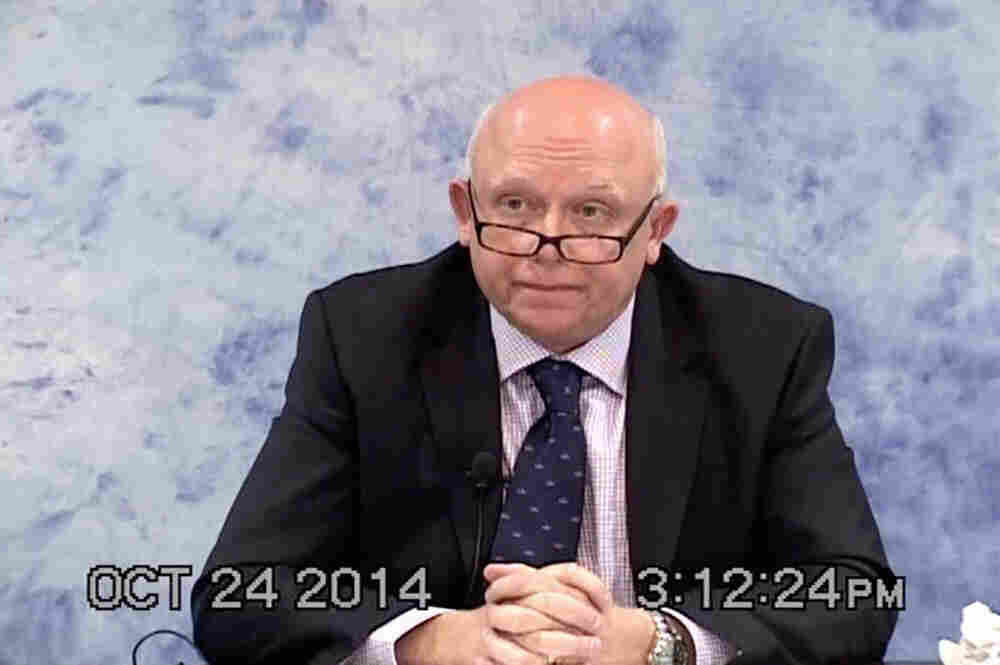 Vanderbilt University professor John Geer sits for a video-taped deposition in 2014, defending his expert witness report which backed up the tobacco industry position that smokers knew of the health risks of smoking as early as the mid-1950s. Academics often provide testimony for the industry. Kenneth Byrd hide caption 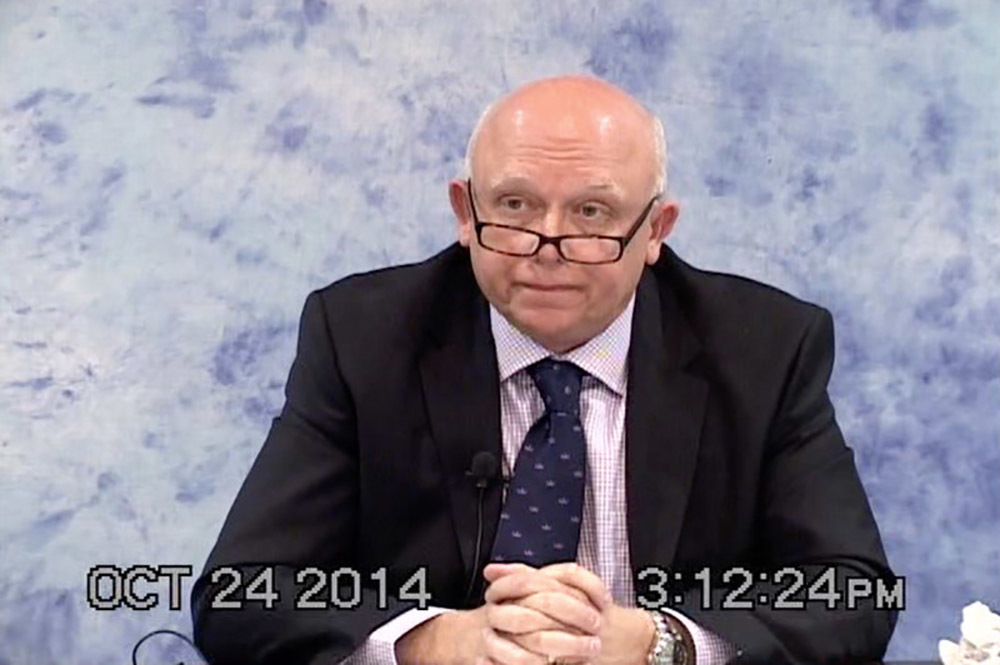 Vanderbilt University professor John Geer sits for a video-taped deposition in 2014, defending his expert witness report which backed up the tobacco industry position that smokers knew of the health risks of smoking as early as the mid-1950s. Academics often provide testimony for the industry.

In 1998, major tobacco companies reached a historic legal settlement with states that had sued them over the health care costs of smoking-related illnesses. But individual smokers have continued to sue, and to this day the tobacco industry remains tied up in hundreds of court fights with sickened smokers, or with family members who lost a loved one to cancer, heart disease, or other smoking-related illness.

These days, tobacco companies no longer try to claim that cigarettes aren't harmful — in fact, in an ironic reversal, a favorite legal defense in current cases is the argument that nearly everyone was aware of the dangers, even back in the 1950s. To shore up this controversial claim, known as the "common knowledge" defense, tobacco companies often enlist academics as expert witnesses. These professors are frequently historians or political scientists who tend to keep these lucrative side gigs walled off from the rest of their academic work. And their testimony can help tobacco companies limit damages.

Professor John Geer, a political scientist and dean of Arts and Science at Vanderbilt University, has been consulting on behalf of tobacco companies from 2004 to at least mid-2018, according to court documents. The fees from legal firms represent as much as a quarter of his annual income.

In a 2014 deposition videotaped just off Vanderbilt University's campus, Geer r was then vice provost. He stares straight ahead with an iced coffee at his side, reading glasses perched on his nose. A court reporter swears him in, and he begins to make his case:

"I have studied a lot of polls, and I'm confident of my opinion of the public being broadly aware of the dangers of smoking by the mid-1950s. The data are rock-solid clear," Geer says in the video.

This argument is part of the "common knowledge" defense, but most of the witnesses who make it are not experts in the history of public health. Geer, for instance, specializes in political science and directs the Vanderbilt Poll. Others who have testified on behalf of tobacco companies are presidential historians or Civil War experts; they include prominent historian and author Stephen Ambrose, who died in 2002 of smoking-related lung cancer.

They erase history by acting as if the things we know today have always been known.

Stanford University history professor Robert Proctor, who wrote a book about the tobacco industry called Golden Holocaust, says most of these academics have never published any research about cigarettes because their opinions can't stand up to peer review.

"They erase history by acting as if the things we know today have always been known," he says.

Proctor is among a smaller group of academics who testify in opposition to tobacco companies, on behalf of smokers dealing with cancer, chronic lung disease and heart problems.

In his book, Proctor lists the professors known to have worked on behalf of tobacco companies. He says most expert witnesses avoid drawing attention to themselves.

"Experts often don't even put it down on their CVs, their resumes — it's absent," Proctor says. "That's one of the problems. It's flying under the radar."

Geer makes no mention of his consulting work — which pays more than $300 an hour — in his 17-page curriculum vitae. That document does include a detailed account of his pursuits on- and off-campus, down to individual guest lectures and media appearances.

"It's not relevant," Geer told Nashville attorney Kenneth Byrd during one deposition. "If I published something from this, I'd list it."

Even,the most active expert witnesses for the tobacco industry have not published research on the topic of tobacco. They include the University of Tennessee's Robert Norrell who studies race and the American South; and Elizabeth Cobbs, a historian at Texas A&M and Michael Schaller, a professor emeritus at the University of Arizona, who both focus on foreign relations. Their names are among 50 that appear in a database kept by Ramses Delafontaine, a historian who wrote a book about his peers working for the tobacco industry.

In depositions, some claim to make more than $100,000 a year for their work on tobacco litigation. None accepted requests for interviews.

Geer did issue a statement to Vanderbilt's student newspaper, Hustler, saying he's not a supporter of "Big Tobacco."

"I truly understand and deeply respect those students who disagree with me having taken on this kind of work," Geer told Hustler. "I do see their perspective and value it. Perhaps my fondest hope is that we all appreciate that disagreement itself is often an engine for change."

The tobacco industry's professors are primarily historians. Their expert reports pull newspaper clippings and excerpts from school textbooks to show judges that the smoker in question probably ran across warnings about cigarettes. And many of the industry's witnesses lean heavily on the same Gallup poll from 1954 that indicates 90% of Americans had heard smoking could cause lung cancer.

But in 1998, Gallup told the tobacco industry to stop using this polling out of context. First, the company sent a letter to historian Lacy Ford at the University of South Carolina. (Ford had testified on behalf of R.J. Reynolds, citing the poll.) Then Gallup officials presented a paper at a conference calling Ford's interpretation an "egregious error" that overlooked the difference between being aware of danger, and actually believing smoking can cause a deadly illness.

"A review of historical Gallup surveys suggests that there was, in fact, a high degree of public doubt and confusion about the dangers of smoking in the 1950s and 60s. There may have been widespread awareness of the controversy over smoking, but public belief that smoking was linked to lung cancer trailed far behind this general awareness of the controversy," the Gallup officials wrote in their conference paper.

The fraternity that litigates these smoking cases are all aware of the history.

Gallup points to its other surveys during the same period that found when people said smoking was "harmful," they were thinking of less serious risks, like coughing, not cancer.

Reached for comment about the continued reliance on the 1954 poll, Gallup general counsel Steve O'Brien — who wrote the paper from 1998 — declined to wade back into the controversy.

"The fraternity that litigates these smoking cases are all aware of the history — or if they were doing their job right, they are," O'Brien wrote in an email.

For his part, Vanderbilt's Geer said in a 2014 deposition that he had never seen the letter to Ford or the Gallup warning, though both are publicly available as part of the Truth Tobacco Industry Documents. That's an archival database, well known to public health researchers, of internal tobacco company documents maintained by the University of California, San Francisco.

Geer had never used it.

"I know of it broadly, but I've never spent any time on [the database]," Geer said.

Occasionally, the professors who work with the tobacco industry's lawyers will be rejected as experts. In one case from late 2011, Geer was barred from testifying over questions about his methodology.

'A denial of history'

Geer's videotaped deposition in 2014 was part of Woodruff v. R.J. Reynolds Tobacco Company, et al., and he also submitted a report summarizing his research and findings. The plaintiff in that suit, a Florida widow, argued that her husband's bladder cancer was caused by his smoking since he was a kid — as much as three packs a day. The case was ultimately settled for an undisclosed amount as part of a larger settlement.

The suit was one of thousands in Florida stemming from a former class-action verdict that was overturned but allowed many smokers to make individual claims using the same jury findings.

Tobacco companies win some and lose some. But the "common knowledge" defense has proven effective at limiting their liabilities, says Stanford's Proctor. It's difficult for a judge or jurors to cast their minds back to the 1950s, suspending all they know now about the dangers of smoking, thanks to 65 years of accumulated science.

But Proctor maintains that the 1950s were "another world."

Proctor points out that most doctors used to be smokers. Some cigarettes were even branded as "doctor recommended." Proctor calls it "a denial of history" to gloss over how broadly smoking was accepted, and how actively tobacco companies contributed to the confusion.

Proctor, along with Middle Tennessee State University historian Louis Kyriakoudes, are among a small number of professors who work on behalf of dying smokers or their surviving spouses.

Both have published extensively on smoking and list on their CVs work as an expert witness against tobacco companies.

"I'm proud of what I do," Kyriakoudes says.

Tobacco companies deserve the chance to defend themselves, he says. But he accuses the professors they hire of donning "intellectual blinders" in order to claim everyone knew that one day smoking would kill them.

"People tell themselves that it's the smoker's fault for smoking, and why should somebody be suing a tobacco company anyway?" he says. "That plays into a very strong bias that blames the victim of addiction."

Plaintiff attorneys will often question the industry's defense experts about what they've disclosed to their academic employer about the outside work. And it's clear from their answers that the academics do not widely advertise their work, even if they disclose to their employer that they consult with law firms, which write the actual checks.

But Allan Brandt, a medical historian and former dean of the Graduate School of Arts and Sciences at Harvard University, says institutions of higher education should be concerned about this vague disclosure — since the professor's faculty appointment is often the credential used to qualify them as an expert in a lawsuit.

"I think it can harm the reputation of our own scholarship and our universities when this isn't really put out in the open," he says.

Many professors are called to be expert witnesses, in multiple types of cases. But Brandt says he hasn't found any defense experts in these tobacco cases who would also be willing to defend their claims (about the awareness of smoking's dangers) in an academic setting.

He says scholars can't have it one way on campus and another in court.

"This is the ultimate public forum," Brandt says. "The ideas that are presented there really ought to be subject to the kind of scrutiny and peer scrutiny that is so characteristic and a desirable value of universities."