Accessibility links
Bill Of The Month: Association Health Plan Leaves Out Mental Health Care : Shots - Health News A woman in Illinois spent five days in the hospital undergoing psychiatric care to help her through a mental health crisis. The bill she got is about the same price as a new Honda Civic. 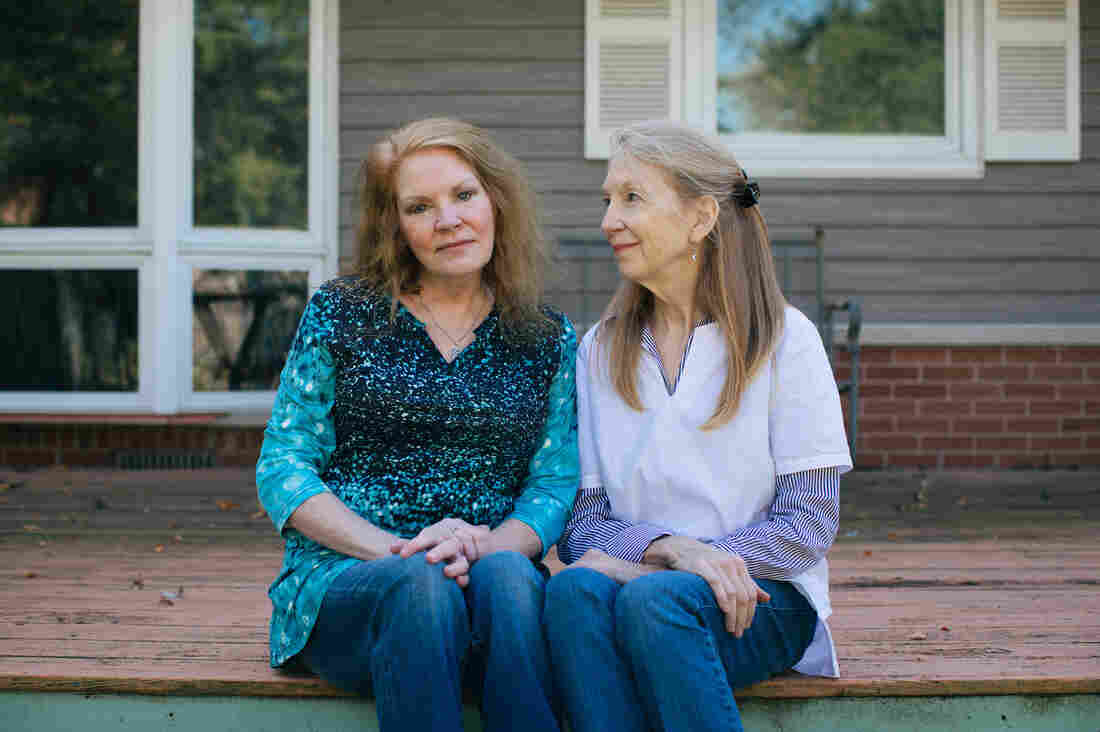 Arline Feilen (left) and her sister, Kathy McCoy, at their mother's home in the Chicago suburbs. The biggest chunk of Feilen's bill was $16,480 for four nights in a room shared with another patient. McCoy joked that it would have been cheaper to stay at the Ritz-Carlton. Alyssa Schukar for KHN hide caption 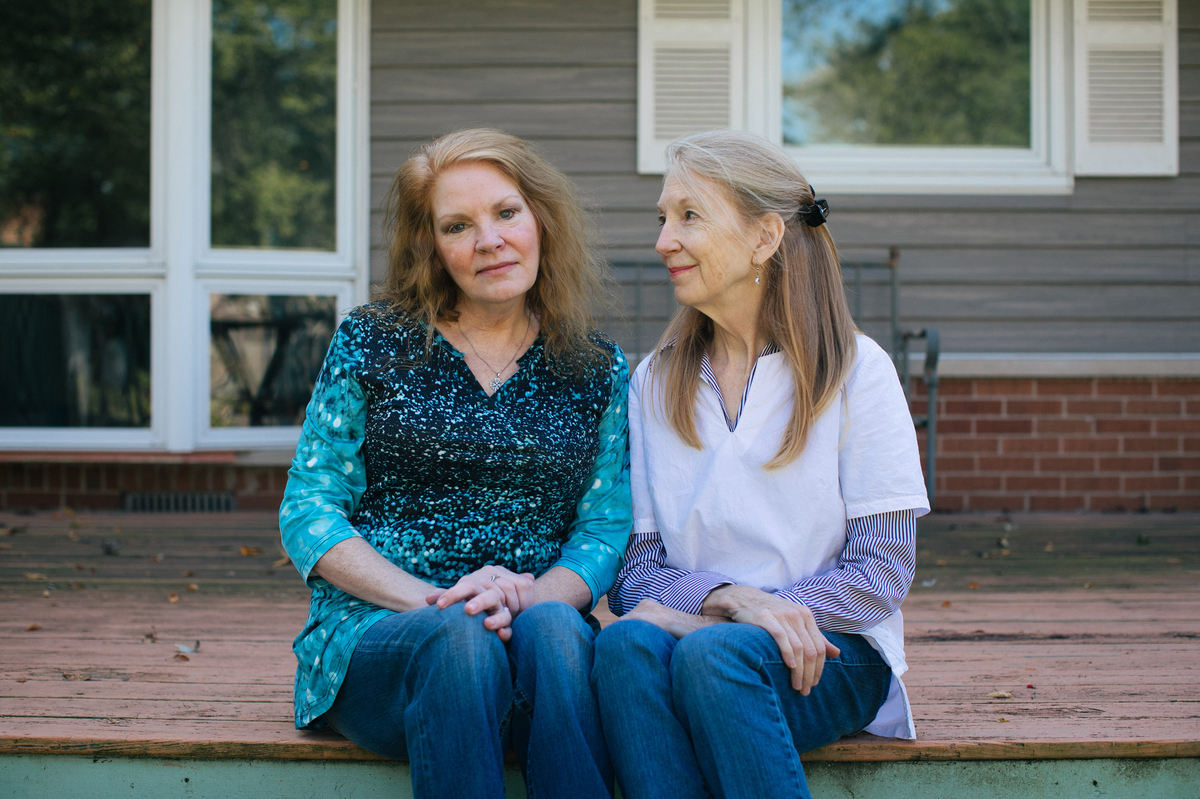 Arline Feilen (left) and her sister, Kathy McCoy, at their mother's home in the Chicago suburbs. The biggest chunk of Feilen's bill was $16,480 for four nights in a room shared with another patient. McCoy joked that it would have been cheaper to stay at the Ritz-Carlton.

Arline Feilen lost her husband to suicide in 2013. Three years later, she lost her dad to cancer. And this February, she lost her 89-year-old mom to a cascade of health problems.

"We were like glue, and that first Mother's Day without her was killer. It just dragged me down," said Feilen, who is 56 and lives in suburban Chicago. "It was just loss after loss after loss, and I just crumbled."

A few days after that painful holiday, she drank eight or nine light beers in several hours, trying to drown her pain. She sent alarming texts to her sister and friends, raising concern she might harm herself. One friend called 911, summoning an ambulance that took her to Northwestern Medicine Central DuPage Hospital.

Feilen arrived in the emergency room on a mid-May night and was moved to a shared room in the inpatient psychiatric unit the next day. In total, she spent five nights in the hospital.

Feilen underwent a battery of tests: bloodwork, an abdominal ultrasound and an electrocardiogram. She got group counseling, which her sister, Kathy McCoy, said really helped. She also started taking an antidepressant, Remeron.

When she got home, she stopped drinking beer. She kept taking the medication and continued counseling. She came to view her mental health crisis as "another mountain I've climbed" — and reminded herself of her accomplishment by keeping her hospital bracelet in her bedroom near a candle. Her grief began to recede.

Patient: Arline Feilen, the widow of a veteran, is a part-time, self-employed medical transcriptionist who lives in Carol Stream, Ill. She purchased individual insurance on the open market, not through the Affordable Care Act exchange.

What gives: Feilen has an "association health plan" purchased through Affiliated Workers Association. It's called SelectCare 1, costs her $210 a month and doesn't cover mental health care.

This is one type of plan that the Obama administration curtailed. But some like Feilen's are permitted again since the Trump administration gave the go-ahead for sales of plans previously considered to offer inadequate coverage.

Like other association plans, hers doesn't have to include the 10 "essential health benefits" required under the federal Affordable Care Act, such as mental health and substance use disorder treatment. In plans that comply with the ACA, those benefits must be treated the same way as physical needs.

Jennifer Snow, acting national director for advocacy and public policy for the National Alliance on Mental Illness, said the type of plan Feilen has is "allowed to undermine the ACA."

The Trump administration last year issued rules making it easier for small employers to band together to offer insurance through these plans. In March, a U.S. District Court judge sided with 11 states and the District of Columbia challenging the law, invalidating a large chunk of those rules. But association plans are still out there, and some states support broader access to them.

Sheri Boehle, an insurance agent who handles Affiliated Workers Association, said many people buy this type of insurance for a short period of time. For the right people, she said, it's a great option that can protect them from the costs of catastrophic physical health problems.

Boehle said she always gives customers a brochure explaining exactly what's covered and what's not, and Feilen said she got one saying treatment for mental health care wouldn't be covered. Feilen said that was all right with her when she bought the policy years ago because she didn't expect to need that service.

To keep costs down while hospitalized, Feilen said, she tried to refuse treatments like the ultrasound but was told she needed it. She got no answers when she inquired how much she might pay.

"I'm asking a simple question, and there should be a simple, finite answer," she said.

Hospitals generally charge uninsured people much more than they charge people who have insurance. A 2017 report from the Health Care Cost Institute showed that the average negotiated price of an acute mental health admission was $9,293 for a commercially insured patient who stayed, on average, for a week. That's less than half of Feilen's bill.

Getting answers about the cost of care can be extremely difficult for patients, even those footing the bills without the help of insurance.

"Hospital pricing is obviously opaque," said Ezra Golberstein, an associate professor at the University of Minnesota's School of Public Health. "The easiest prices to get are how much to pay for parking and how much things cost at the snack bar."

The biggest chunk of Feilen's bill was $16,480 for four nights in a psychiatric unit room shared with another patient. Adding the night in the ER brings it up to $20,479 — the majority of the entire bill.

McCoy joked that it would have been a lot cheaper for her sister to stay at a Ritz hotel.

That's true. According to its website, five nights in the fanciest suite at the Ritz-Carlton in downtown Chicago costs $12,895.

Resolution: Without prompting, the hospital reduced Feilen's bill by $8,968.35 because she lacked mental health coverage. This amount was already taken off the bill when she got it.

Hospital officials provided a statement saying Northwestern Medicine offers a variety of financial assistance programs for uninsured, underinsured and insured patients. Often, they said, a social worker or community partner helps the patient navigate the process, which includes filling out an application and providing supporting information and documents.

"In this case, we have tried numerous times to connect with this patient to provide guidance and assistance," the statement said.

Feilen said she talked to a social worker at the hospital about costs and began filling out a form for financial help, but stopped when she got to a part that asked about stocks and bonds. Although her annual income is below the poverty level ― and she likely qualifies for Medicaid ― she received a modest inheritance from her parents that she has put into a retirement plan, she said, and thought that meant she wouldn't qualify.

When she was buying insurance years ago, Feilen said, she started to look into plans on healthcare.gov that offer subsidies to many people with low or middle-class incomes. But she said she found them confusing and gave up.

NAMI's Snow said it's sometimes tough for consumers to know whether a plan complies with the health care law. Plans sold outside of healthcare.gov may be labeled "Obamacare" but not have the health law's guaranteed benefits.

"You have to be really careful you don't accidentally buy one. They're always cheaper," she said. "But if it seems too good to be true, it probably is."

To find ACA-compliant plans, which must cover mental health, Snow suggested going to HealthCare.gov, the federal marketplace that covers most states. (It will direct you if your state set up its own ACA marketplace.)

The takeaway: If you're uninsured, you'll generally face bigger bills than patients with health insurance because you lack the power of the insurance company to negotiate prices with the hospital. Ask whether you qualify for Medicaid or charity care. If you don't, negotiate with the hospital anyway to try to lower your bill. Arm yourself with information about the going rate insurers pay for the care you received by consulting websites like Healthcare Bluebook or Fair Health.

When buying insurance, make sure you know what's covered and what's not, which can be tricky to determine for plans — many of which can be found on the Internet — that don't have to follow all the rules of the federal health law.

"On the individual market, it's very much 'buyer beware' for plans that are not ACA-compliant," Golberstein said. "With short-term or association health plans, really read the fine print."

If Feilen could go back in time, she said she would have surely bought insurance that covered mental illness, which affects 1 in 5 U.S. adults each year.

"I would definitely recommend it. You don't know what life is gonna bring you," she said. "I never imagined in a million years that I'd need mental health care."

Bill of the Month is a crowdsourced investigation by Kaiser Health News and NPR that dissects and explains medical bills. Do you have an interesting medical bill you want to share with us? Tell us about it here.