Accessibility links
Bill For Air Ambulance Exceeded The Cost Of Double-Lung Transplant : Shots - Health News After Tom Saputo underwent a double-lung transplant in 2018, he was stunned by the more than $11,000 bill for his share of a 27-mile air ambulance ride from one hospital to another. 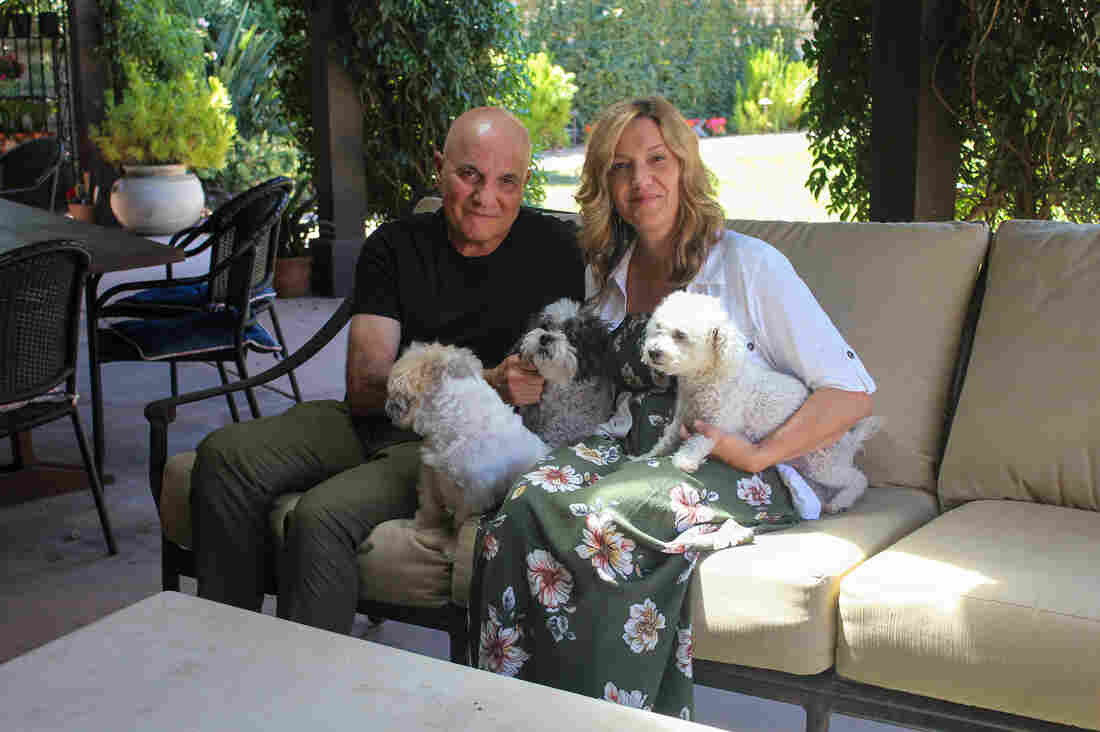 Tom and Dana Saputo sit in their backyard with their three dogs. Tom Saputo's double-lung transplant was fully covered by insurance, but he was responsible for an $11,524.79 portion of the charge for an air ambulance ride. Anna Almendrala/KHN hide caption 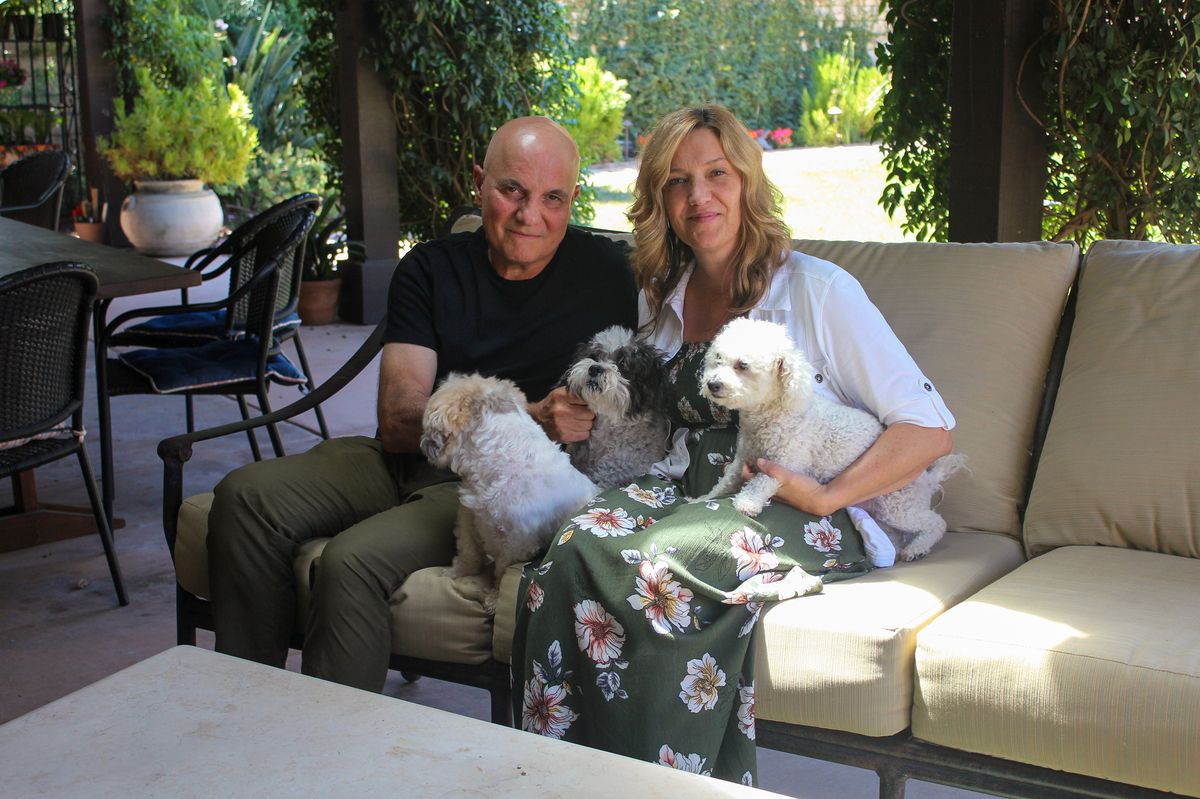 Tom and Dana Saputo sit in their backyard with their three dogs. Tom Saputo's double-lung transplant was fully covered by insurance, but he was responsible for an $11,524.79 portion of the charge for an air ambulance ride.

Before his double-lung transplant, Tom Saputo thought he had anticipated every possible outcome.

But after the surgery, he wasn't prepared for the price of the 27-mile air ambulance flight from a hospital in Thousand Oaks, Calif., to UCLA Medical Center — which cost more than the lifesaving operation itself.

"When you look at the bills side by side, and you see that the helicopter costs more than the surgeon who does the lung transplant, it's ridiculous," said Dana Saputo, Tom's wife. "I don't think anybody would believe me if I said that and didn't show them the evidence."

"Balance billing," better known as surprise billing, occurs when a patient receives care from a medical provider outside of his insurance plan's network, and then the provider bills the patient for the amount insurance didn't cover. These bills can soar into the tens of thousands of dollars.

Surprise bills hit an estimated 1 in 6 insured Americans after a stay in the hospital. And the air ambulance industry, with its private equity backing, high upfront costs and frequent out-of-network status, is among the worst offenders.

Congress is considering legislation aimed at addressing surprise bills and air ambulance charges. And some states, including Wyoming and California, are trying to address the problem even though there are limits to what they can do, because air ambulances are primarily regulated by federal aviation authorities.

Saputo, 63, was diagnosed in 2016 with idiopathic pulmonary fibrosis, a progressive disease that scars lung tissue and makes it increasingly difficult to breathe.

The retired Thousand Oaks graphic designer got on the list for a double-lung transplant at UCLA and started the preapproval process with his insurance company, Anthem Blue Cross, should organs become available.

But before a transplant could be arranged, he suddenly stopped breathing on the evening of July 7, 2018. His wife called 911.

A ground ambulance drove the couple to Los Robles Regional Medical Center, 15 minutes from their house, where Saputo spent four days in the intensive care unit before his doctors sent him to UCLA by air ambulance.

He was on the brink of death, but just in time, the hospital received a pair of donor lungs. They were a perfect match, and two days after arriving at UCLA, Saputo was breathing normally again. 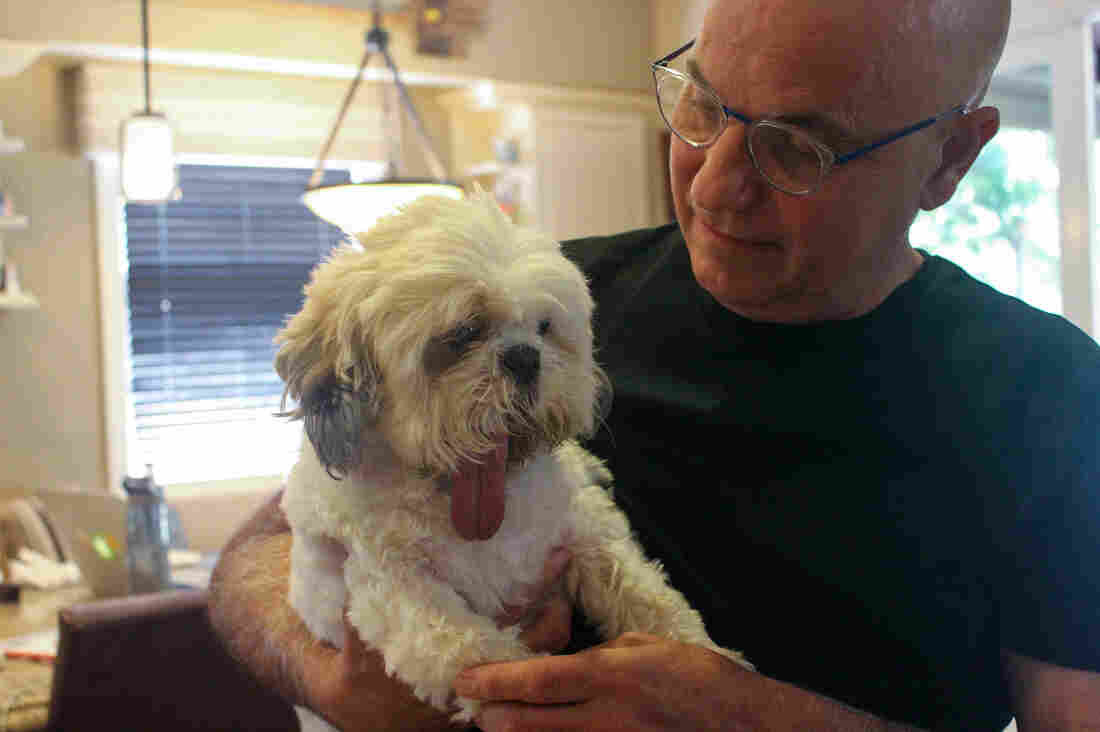 After Tom Saputo became ill, his dog Lindsey never let him out of her sight. Saputo was diagnosed with pulmonary fibrosis in 2016 and underwent a successful double-lung transplant in July 2018. Anna Almendrala/KHN hide caption 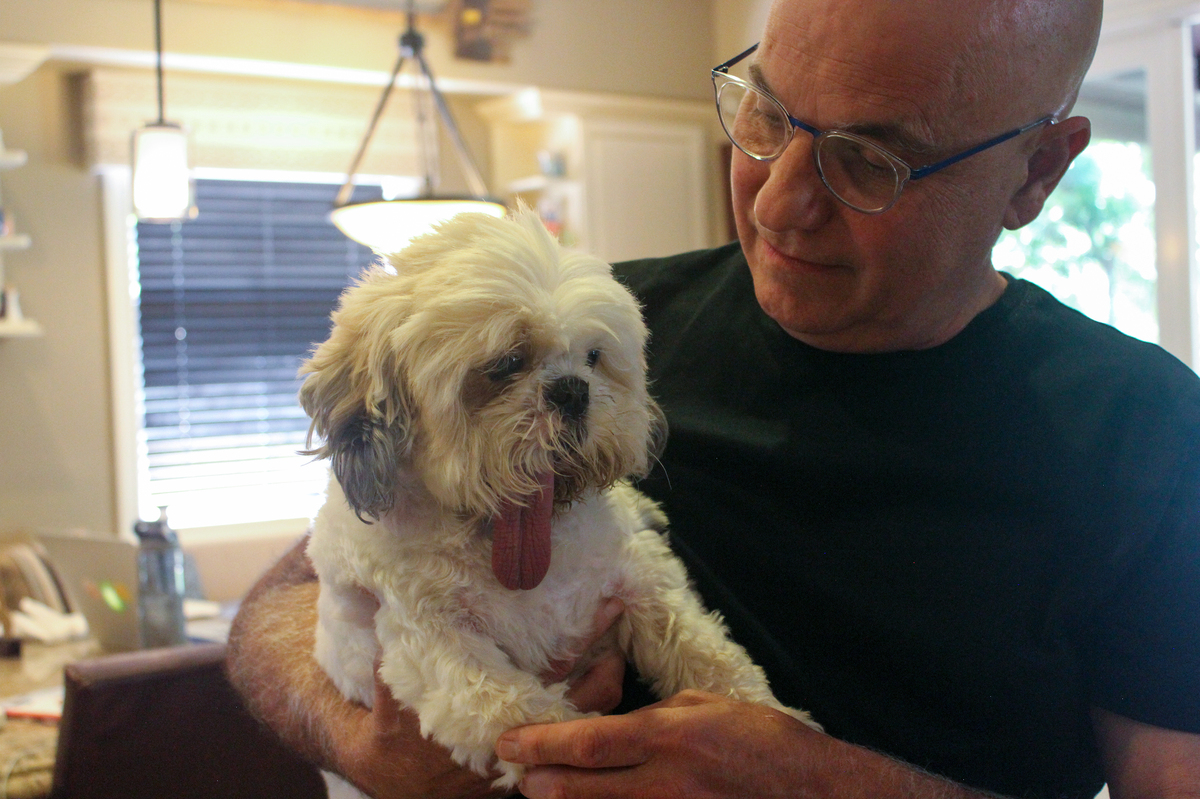 After Tom Saputo became ill, his dog Lindsey never let him out of her sight. Saputo was diagnosed with pulmonary fibrosis in 2016 and underwent a successful double-lung transplant in July 2018.

Saputo's recovery was difficult, and problems like infections put him back in the hospital for observation. But the most unexpected setback was financial.

When Saputo opened a letter from Anthem, he discovered the helicopter company, which was out of his network, had charged the insurance company $51,282 for the flight. Saputo was responsible for the portion his insurance didn't cover: $11,524.79.

By contrast, the charges from the day of his transplant surgery totaled $40,575 — including $31,605 for his surgeon — and were fully covered by Anthem.

Saputo appealed to Anthem twice about the ambulance charges. Meanwhile, the helicopter company, Mercy Air, kept calling him after he left the hospital, asking him to negotiate with his insurance company. It even called his adult daughter in San Francisco to ask how the Saputos planned to pay the bill.

"I have no idea how they even got her name or her number," Saputo said.

Mercy Air is a subsidiary of Air Methods, which operates in 48 states and is owned by the private equity firm American Securities.

Air Methods acknowledged by email that it had put Saputo through a "long and arduous process." The company contacted his daughter because it tried every phone number associated with him, said company spokesman Doug Flanders. But Air Methods laid the blame at the feet of his insurer.

Anthem spokeswoman Leslie Porras said the blame doesn't lie with insurers, but with air ambulance companies that remain out of network so they can charge patients "whatever they choose."

"The ability to bill the consumer for the balance provides little incentive for some air ambulance providers to contract with us," Porras said.

(In January, six months after Saputo's surgery, Anthem entered into a contract with the air ambulance company to make it an in-network provider, she said.)

Air Methods forgave Saputo's bill in August after ABC's Good Morning America, working with Kaiser Health News, inquired about his case. Air Methods said it was an internal decision to zero out his bill.

Other patients usually aren't as lucky.

The median cost of a helicopter air ambulance flight was $36,400 in 2017, an increase of more than 60% from the median price in 2012, according to a Government Accountability Office analysis. Two-thirds of the flights in 2017 were out of network, the report found.

The air ambulance industry justifies these charges by pointing out that the bulk of its business — transporting patients covered by the public insurance programs Medicare and Medicaid — is underfunded by the government.

The median cost to transport a Medicare patient by air ambulance is about $10,200, according to an industry study. However, air ambulance companies are reimbursed a median rate of $6,500 per flight.

"The remaining 30% of patients with private health insurance end up paying over 70% of the costs," said Flanders of Air Methods.

But critics argue the real problem is market saturation. While the number of air ambulance helicopters in the U.S. has increased — rising more than 10% from 2010 to 2014 — the number of flights hasn't, which means air ambulance companies seek to raise prices on each ride.

"This is a great opportunity to make money, because patients don't ask for the price before they receive the service," said Ge Bai, an associate professor of accounting and health policy at Johns Hopkins University.

That's what frustrated the Saputos the most about their air ambulance charge: There was no way they could have shopped around to compare costs beforehand.

"There's just no possible way that a customer of insurance can navigate that process," Dana Saputo said.

Bai also criticized the practice of charging privately insured patients exorbitant amounts to make up for losses from Medicaid and Medicare patients.

"If they feel that Medicare and Medicaid is paying too little, they should lobby the government to get a higher reimbursement," Bai said.

In California, Democratic Gov. Gavin Newsom signed a bill in early October that will limit how much some privately insured patients will pay for air ambulance rides. Effective next year, the law, by state Assemblyman Tim Grayson, will cap out-of-pocket costs at patients' in-network amounts, even if the air ambulance company is out of network.

Wyoming is moving to treat the industry like a public utility, allowing the state's Medicaid program to cover all of its residents' air ambulance trips and then bill patients' health insurance plans. The state would then cap out-of-pocket costs at 2% of the patient's income or $5,000, whichever is less. Wyoming needs permission from the federal government to proceed.

Ultimately, though, state authority is limited because the federal Airline Deregulation Act of 1978 prohibits states from enacting price laws on air carriers.

Congress is considering several bipartisan bills on surprise billing. One measure by Sens. Lamar Alexander, R-Tenn., and Patty Murray, D-Wash., would ban balance bills from air ambulance companies. The bill passed committee and is now headed to the Senate floor for a vote, pending approval from Senate Majority Leader Mitch McConnell of Kentucky.

Air Methods said that, in general, it would support federal legislation that would calculate new rates for Medicare reimbursement, as long as they are based on cost data the industry provides.

But there is intense industry opposition to the bill. Combined with the complexity of the legislation (it also includes prescription drug price reform) and competing Senate leadership priorities, the measure faces a rocky path to the president's desk, said Melissa Lorenzo Williams, manager of health care policy and advocacy at the National Patient Advocate Foundation.

"Despite having bipartisan and bicameral support, I can't confidently say that this is something that will pass," Williams said.