Accessibility links
Drug Pipeline To Fight Antibiotic Resistance Is Running Low : Shots - Health News Infectious disease specialists debate whether it's better to give the strongest antibiotics all at once for drug-resistant germs or save the most innovative medicines for use as a last resort. 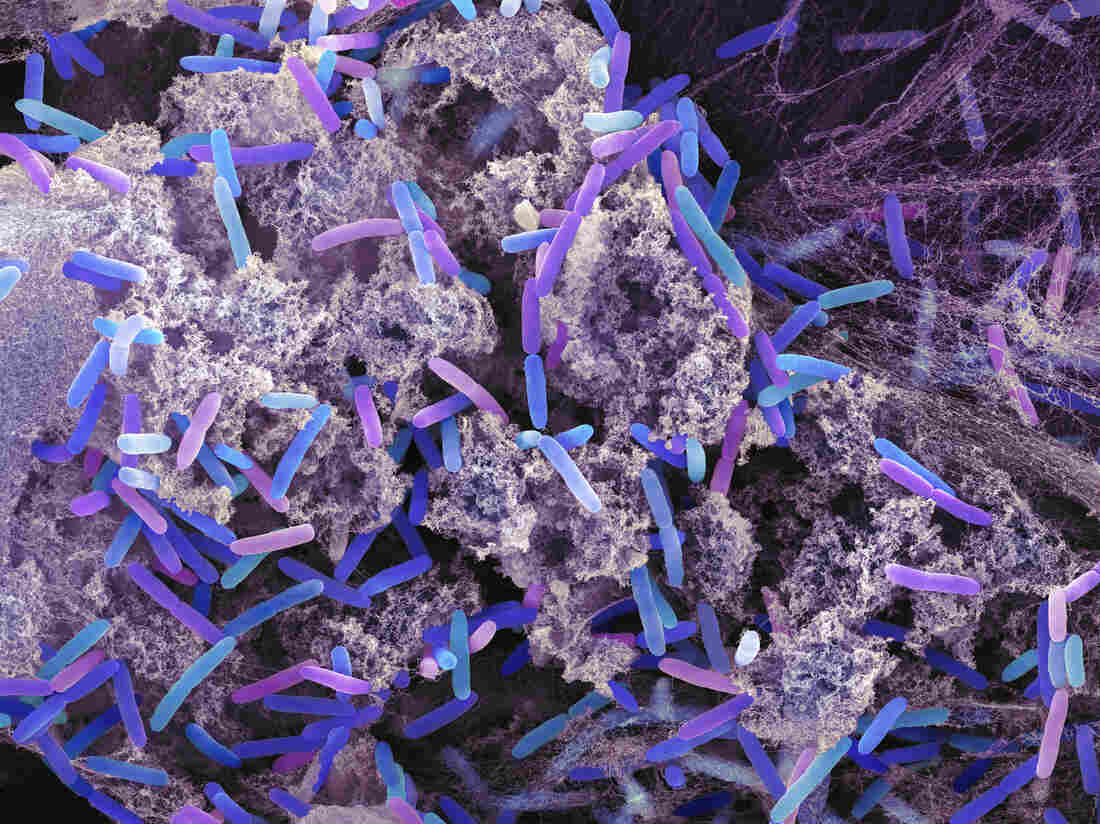 Pseudomonas aeruginosa bacteria — rod-shaped bacteria in this tinted, scanning electron microscope image — are found in soil, water and as normal flora in the human intestine. But they can cause serious wound, lung, skin and urinary tract infections, and many pseudomonas strains are drug-resistant. Science Photo Library/Science Source hide caption 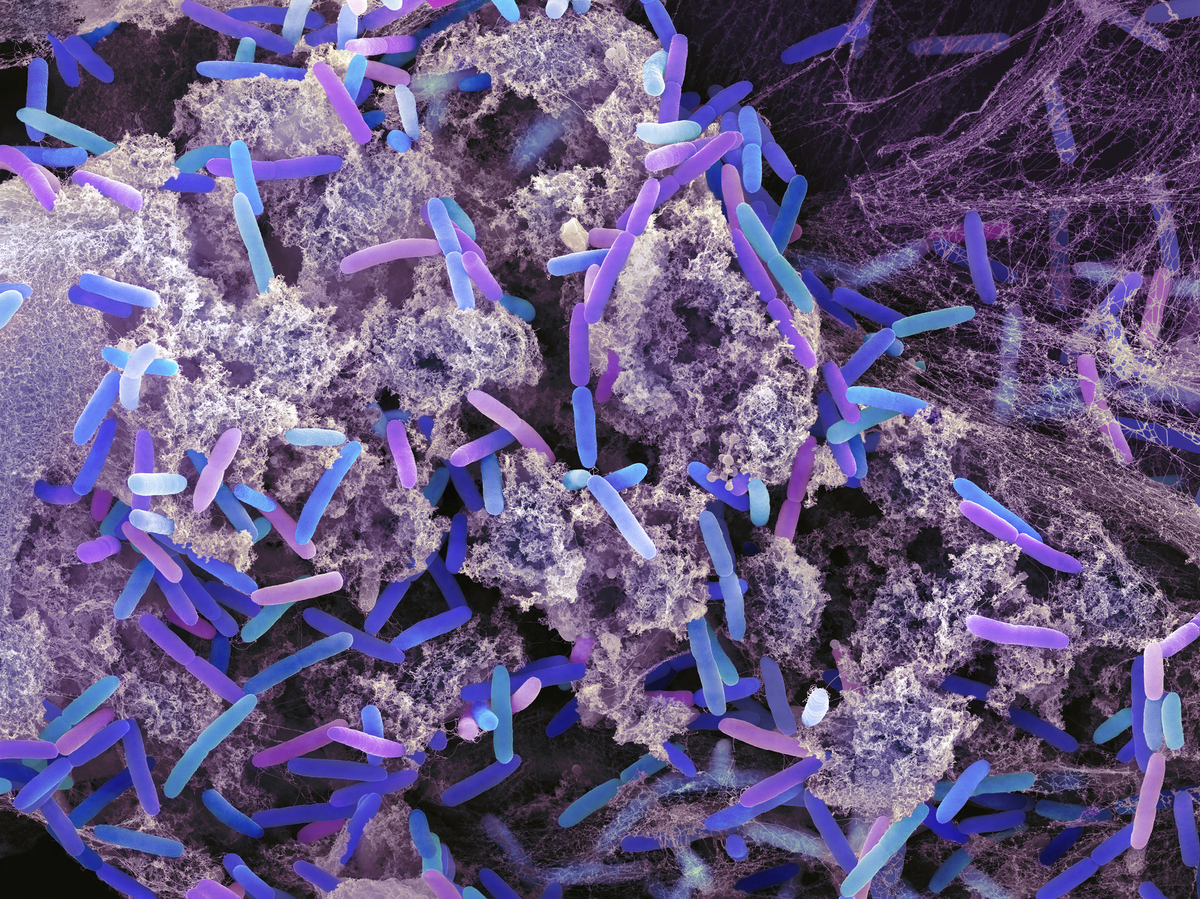 Pseudomonas aeruginosa bacteria — rod-shaped bacteria in this tinted, scanning electron microscope image — are found in soil, water and as normal flora in the human intestine. But they can cause serious wound, lung, skin and urinary tract infections, and many pseudomonas strains are drug-resistant.

Five years ago, Mary Millard went to the hospital for heart surgery. A contaminated medical instrument gave her an infection that led to septic shock. Her heart struggled, and her lungs and kidneys started to fail.

"What I caught was pseudomonas, and it's a very virulent superbug," says the 60-year-old former nurse who lives in Baton Rouge, La. This bacterium no longer responds to most antibiotics, and "it lives in you permanently, so I'm on lifetime antibiotics," she says.

Her doctor prescribed one of the most powerful antibiotics available, and there is no clear backup for her if that stops working. "It's kind of a wait-and-see. And that's what's scary."

Millard is just one of about 2 million Americans who have been infected with a superbug. Tens of thousands die each year, and the numbers are vastly higher on a global scale.

The Centers for Disease Control and Prevention published a major new report about antibiotic resistant germs on Wednesday. The CDC now estimates more than 2.8 million infections that resist treatment and 35,000 deaths a year in the United States from this problem – a big jump from its previous estimate in 2013.

The report does show that improved medical practices have reduced hospital-related infections with these superbugs, but the agency warns that several common bacteria, including the one that causes gonorrhea, are becoming more resistant to antibiotics.

People in the business of inventing new drugs don't need to be told one of the most disturbing facts: It simply doesn't make much financial sense for companies to develop new antibiotics.

The medicines are used for short-term treatment, unlike those that patients might take for a lifetime to manage a chronic disease. And the most innovative antibiotics are kept on the shelf to minimize the development of resistance.

Yet bacteria are constantly evolving to outwit the current crop of drugs, so there's a need for new antibiotics all the time.

One company, Achaogen, managed to bring one to market recently, but because doctors (sensibly) held it in reserve for only the most desperate cases, the product barely sold. The company filed for bankruptcy.

"Their sales were nowhere enough to recoup just their operating costs, let alone their investment expenditures," says Greg Frank at the Biotechnology Innovation Organization, an industry group. "And we've seen that time and time again with other companies."

He says it's not only a crisis for the industry — but for public health.

"We're not developing nearly enough products to stay ahead of resistance," he says. Frank counts just 70 products in various stages of development. "Many of those are not going to reach the market," he says. "Those that do are right now destined to fail" for economic reasons. "And so the very dry pipeline is only going to get worse."

The industry is trying to persuade the federal government to provide big-dollar incentives to keep the antibiotic pipeline flowing. (A bill called the DISARM Act is pending in Congress.)

But Andrew Read, a biologist at Penn State University, argues that there must be a better way to fight these superbugs other than engaging in an endless arms race with them.

"Most people are looking for new drugs or new drug targets, or rapid diagnostics" — tests that can quickly help doctors identify the best antibiotic for a given infection, he says. "And all that is important work, but the heart of the problem is the evolutionary process that generates the resistance."

Few scientists are focusing on that most basic problem to find out-of-the-box solutions. He is an exception.

One idea: Since bacteria are more likely to evolve resistance if they are exposed to antibiotics for a long time, why not try limiting the dose, at least for people with healthy immune systems?

To Find The Next Antibiotic, Scientists Give Old Drugs A New Purpose

This idea needs to be tested in people. Read notes that many of the current rules about prescribing antibiotics are based on tests done long ago. Efforts to refine those practices have been based primarily on health outcomes rather than considering antibiotic resistance.

Another idea is to hit germs with several drugs at once, the way tuberculosis is treated with a multidrug combination. (Resistance still arises with TB, but largely when people fail to keep up their medication.)

"Psychologically it's a bit scary putting all your firepower into one regimen," Read admits. "On the other hand, it can work very effectively at preventing the evolution of resistance. So instead of just using drug A and that fails and then drug B and that fails, and then drug C, using A, B and C all together can stop any of them failing."

Another evolutionary biologist working in this area is Hinrich Schulenburg, at Christian-Albrechts University in Kiel, Germany.

"One idea that we are particularly interested in is 'sequential therapy,' " he says. That entails giving different antibiotics in rapid sequence — say, switching every 12 or 24 hours so the environment for the germ is always changing.

"We know from evolutionary theory that this makes it very difficult for any organism to adapt fast to these conditions," he says.

Schulenburg has tested that idea successfully in petri dishes and is now gearing up to test the concept in humans.

"The point that we, as evolutionary biologists, want to make is that whatever kind of treatment we design, we need to take into account how bacteria evolve," he says.

A small company called Synthetic Biologics in Rockville, Md., is developing a counterintuitive drug — an enzyme that actually destroys common antibiotics called beta lactams, such as penicillin. Their strategy is to give these pills to people who are getting antibiotics injected directly into the bloodstream.

"Our enzyme stays in the gut and it's not absorbed into the blood, so it doesn't affect antibiotic efficacy," says Sheila Connelly, the company's vice president of research.

The enzyme destroys antibiotics in the gut, which is where they are most likely to lead to drug resistance. Resistance traits can also be passed from one bacterial species to another, making the gut a cauldron of superbug evolution.

"If we can avoid the gut being exposed to antibiotics, then we prevent the evolution and emergence of antibiotic resistance," Connelly says.

Preliminary tests involving more than 400 patients suggest that the medicine works — and it also reduces the risk that people will develop a potentially deadly condition called C. difficile, which is triggered when antibiotics in the gut kill off too many "good" bacteria.

The company is now planning extensive clinical trials to test the safety and effectiveness of its product. (It is also working on a time-release version, designed to be taken with oral antibiotics that would allow those drugs to get absorbed into the bloodstream before kicking in.)

Connelly is optimistic about the economic prospects of this drug. The enzyme can be manufactured inexpensively, she says, and unlike new drugs which are often held in reserve, this one could be used widely by people taking common antibiotics.

"I do think that there can be some creative ways to buy us time," says Frank at the biotech trade group. "I am firmly of the opinion, though, that we will almost certainly never outthink bacteria with our current arsenal. We will always be developing new medicines."

Schulenburg agrees that these methods won't be a cure-all for the precarious role of antibiotics. "I think the most important solution is to use less," he says, "and this is still where we are doing a bad job."