Accessibility links
For Vape Culture's Many Tribes, Quitting Tobacco Is Only One Motivation : Shots - Health News Vaping has produced a diverse community of aficionados with all sorts of subspecialties. One vape-juice "mixologist" sells her recipes for as much as $1,500, while custom-made devices go for $3,000.

Artisanal Vapers? For Some, The Habit's About Much More Than Quitting Tobacco

Artisanal Vapers? For Some, The Habit's About Much More Than Quitting Tobacco 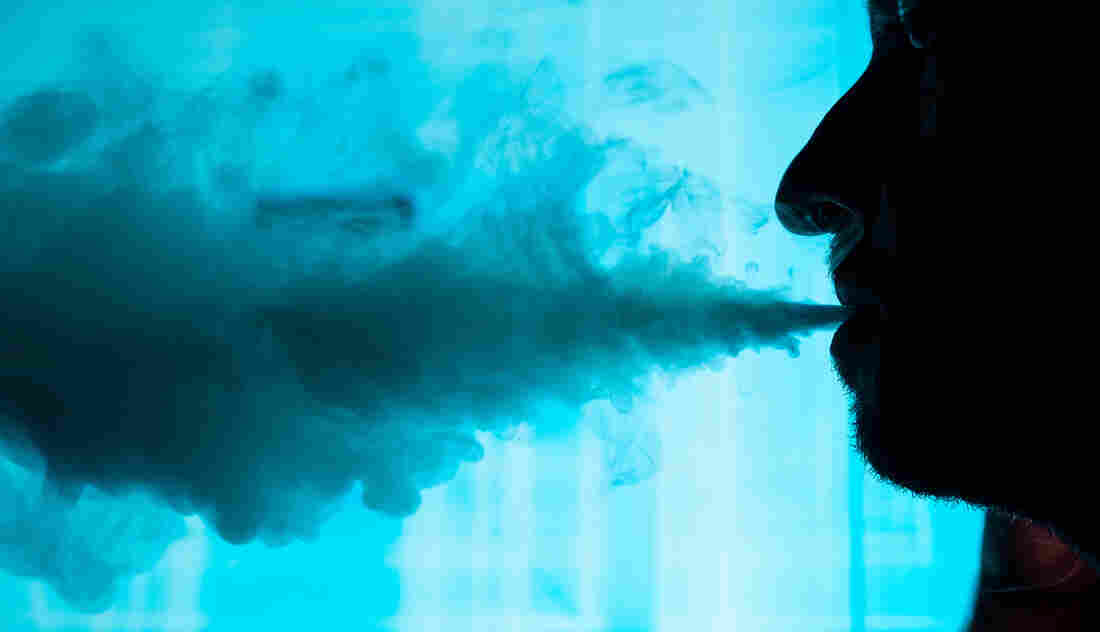 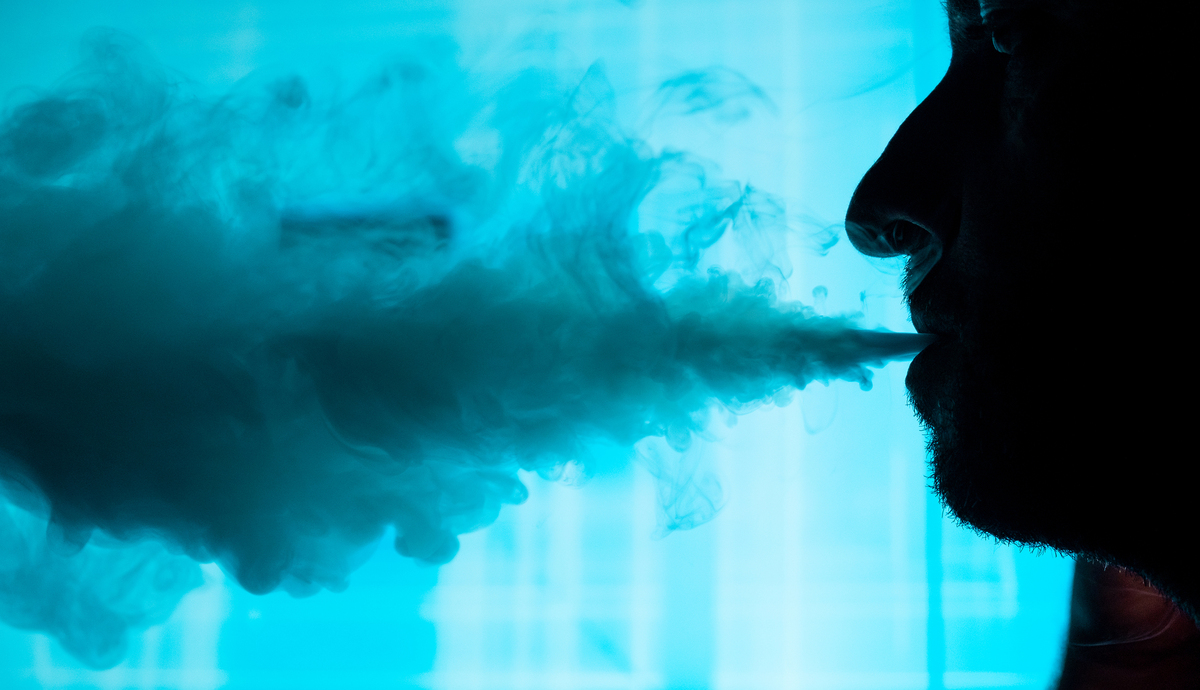 Getting a handle on evolving vape culture means exploring the complex realm of subspecialists: "cloud chasers," "coil builders" and other people who identify as vape modders.

A Juul pod is not an e-cigarette is not a vape pen is not a mod, as any serious vaper can tell you.

But then, what kind of serious vaper do you ask? Check social media, and you'll see mentions of "nicotine casuals" and vapers drawn to THC, the psychoactive ingredient in marijuana. There are the hobbyists, with all their subgenres: do-it-yourselfers, cloud chasers, sub-ohmers, coil builders and other device modifiers, called modders. Not to mention social media influencers.

Finding your tribe among vapers is more complex than finding your Hogwarts house, and people who don't vape can be forgiven if they feel the need for a glossary.

With all the talk these days about teen vaping and the possible increase of restrictions, it seems a good time to check in with some adult vapers — to define terms and catch up with how vape culture is evolving.

On blogs, Instagram and online forums such as Reddit, the various types of vapers ⁠— interested as they are in vastly different things ⁠— don't agree on how or if vaping might be regulated, what exactly should be regulated, or even who should be prevented from vaping. There you'll find members of the DIY clan sharing recipes for flavored e-liquids, how-to guides and links to instructional YouTube videos to help newcomers to vaping who worry that politicians will further restrict this legal drug habit.

Jennifer Winstead, 47, a fraud analyst in North Carolina, is among the people who worry about restrictions. She calls herself an e-juice mixologist, which means she takes vegetable glycerin and propylene glycol and adds any number of flavorings, with or without nicotine, to concoct her own blends — such as cherry berry or strawberry coconut milk. She sells these recipes to companies; you can't buy e-liquids from her directly.

"DIYers are research gurus," says Winstead, who takes a pull from her mod between each thought. "We don't want to hurt ourselves. Nothing with oil or organic matter should be in it."

A mix of devices

These days, Winstead uses three different devices, each delivering a different type of vapor hit. One is a high-power "sub-ohm device" that delivers a low dose of nicotine in a "full-lung hit" of her strawberry milk e-liquid. Sub-ohm devices (more about them and why they're called that in a moment) produce larger amounts of vapor for more potent hits of e-liquid.

The second device she uses performs more like a cigarette, with tight draws that deliver higher nicotine doses with a mint chocolate chip e-liquid. And the third delivers even lower nicotine doses "for that hand to mouth fixation without getting 'nicked out,' " she says. She paired that device with a peach mango e-liquid.

"Rotating flavors is key for me to be satisfied and stay off cigs," she says. "It's not all about the nicotine."

Winstead says she quit smoking cigarettes using a grape-mint flavor, but her most popular recipe is her strawberry-coconut milk. She says she sells the e-juice recipes overseas for between $500 and $1,500, with the price dependent on the size of the manufacturer buying them.

She thinks any prohibition in the United States will further fuel the drive for vapers to create their own flavors, and using the wrong ingredients — such as flavorings intended for food — could cause more harm.

Indeed, just last week the Centers for Disease Control and Prevention announced that vitamin E acetate, an additive to some foods and some vaping fluids, had been found in 29 patients from 10 widely dispersed states who were among those hospitalized with serious lung injuries after vaping. Vaping-related lung injuries have led to the deaths of at least 39 people and sickened more than 2,000 others, the CDC says.

Members of the DIY community are not anti-regulation, just anti-prohibition, says Wayne Walker of Philadelphia. Walker, 29, is a small-business owner. He creates e-liquid flavor concentrates for sale and runs the site DIY Or Die Vaping.

His customers have to mix the flavor concentrate with propylene glycol and/or vegetable glycerin before vaping it.

"The DIY e-mixing community is a lot closer to bartending than chemistry," Walker says. "You're taking premade ingredients and mixing them to make your own flavor profile."

Walker says he has worked as a vape mixologist for five years. "Even if the U.S. did ban flavors across the board, I could still sell in the U.K.," he says.

Aaron Evans, 41, a vaping DIYer from Washington, D.C., says vaping is helping him kick the cigarette habit. "I started smoking cigarettes when I was 11 years old. I smoked cigarettes for 28 years." Evans says he used to be a "coil builder," though he now considers himself a "flavor chaser."

Inside every mod is a battery that heats up a metal coil. After the e-liquid is sucked up into the mod via the wicking material, it turns into vapor when it hits that heated coil.

A "coil builder" is someone who adjusts the size, shape and design of the device's coils to change the amount of vapor or the intensity of the flavors.

Meanwhile, "flavor chasers" believe that making these same kinds of adjustments to the device can also affect the intensity of the flavors. Their interest is in producing the perfect "bite" or flavor experience from their mod. All mixologists are flavor chasers, but not all flavor chasers are mixologists.

And all of these subgroups may have tried "sub-ohming" — an extreme alteration of the device's coils to reduce their electrical resistance, which is measured in ohms. A "sub-ohm" coil creates less than 1 ohm of electrical resistance. The result: much higher heat and bigger clouds of vapor. A more powerful battery can produce the same effect.

This isn't a cheap hobby, and it's not for the casual e-cigarette user. A high-end, fully customized vape mod can range in price from a couple of hundred dollars to a few thousand, such as the $3,000 Otto Carter vape mod.

Evans, the self-described flavor chaser, was first introduced to vaping when he saw a woman using a device outside a Washington, D.C., Metro station in 2017. She pointed him to a nearby vape store where the vendor helped him purchase and set up his first mod kit.

He was given an e-liquid containing 3 milligrams of nicotine in a tobacco flavor. The dosage wasn't strong enough for him, he says, and he went back to cigarettes. It wasn't until Evans went online that he discovered he could make his own e-liquid with the flavor and nicotine strength of his choosing.

"I'll never forget the company name. It was called 'Naked,' and the flavor was some kind of pineapple orange juice," he says.

Evans' love for flavors led him to research how to enhance the flavors and to explore the world of rebuildable tank atomizers and coil building. Coils can be made out of steel, titanium, nickel or a trademarked alloy of iron, chromium and aluminum called Kanthal. Each coil heats differently.

"It's like an art form when people make them," Evans says. "If you look at them up close, they are very beautiful the way they are twisted."

Despite vaping's expense, Evans estimates that he has saved close to $6,000 in the past 20 months by switching from cigarettes to e-liquids. He is now down to 3 milligrams of nicotine in his e-liquids, he says, and plans to "zero out" soon. He may stop vaping entirely.

"Thanks for talking to me. I'm about to go hit my mod," Evans says. He walks to a spot outside a Washington Metro station and pulls out his mod and his e-liquid of choice this day: a 7 Daze Reds Apple Juice in a mentholated grape flavor.