Accessibility links
Vascepa, A Prescription Fish Oil Pill, May Help Prevent Heart Disease : Shots - Health News A high-dose prescription fish oil pill has been shown to reduce the risk of heart attacks and strokes. An FDA advisory panel voted in favor of expanded use of the drug. 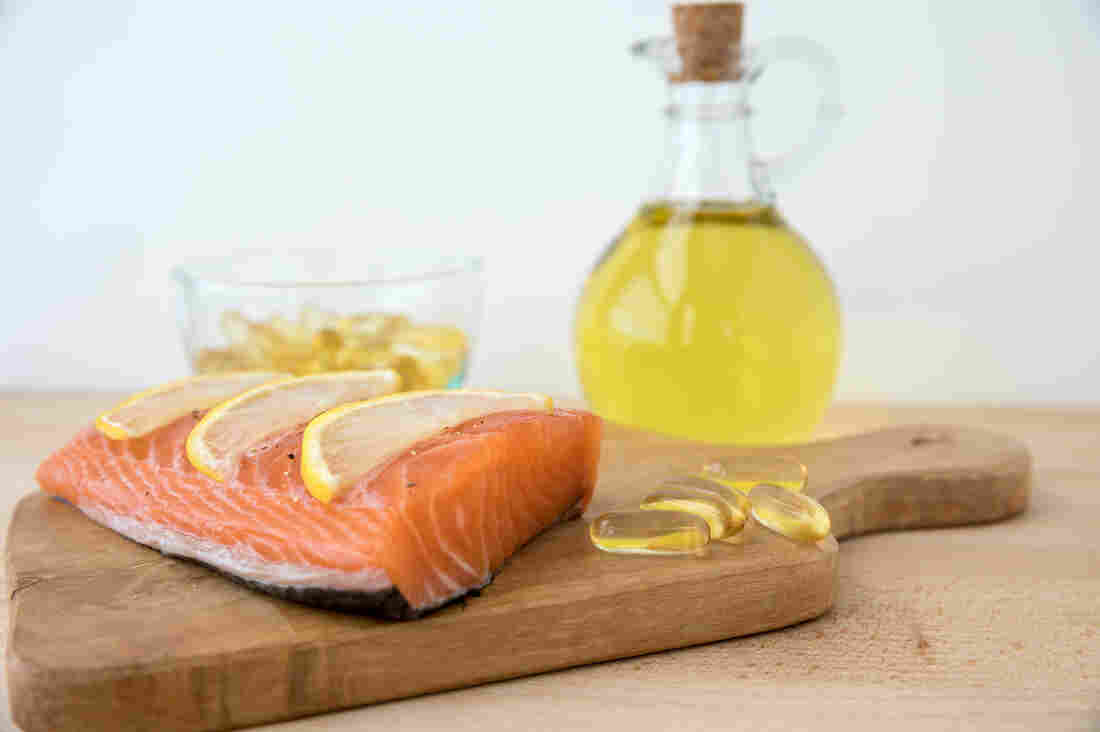 Eating fish can protect against heart disease but many people don't eat enough to be effective. In November, an FDA panel recommended broader use of a prescription-strength fish oil drug Vascepa for people at higher risk of heart disease. Enn Li Photography/Getty Images hide caption 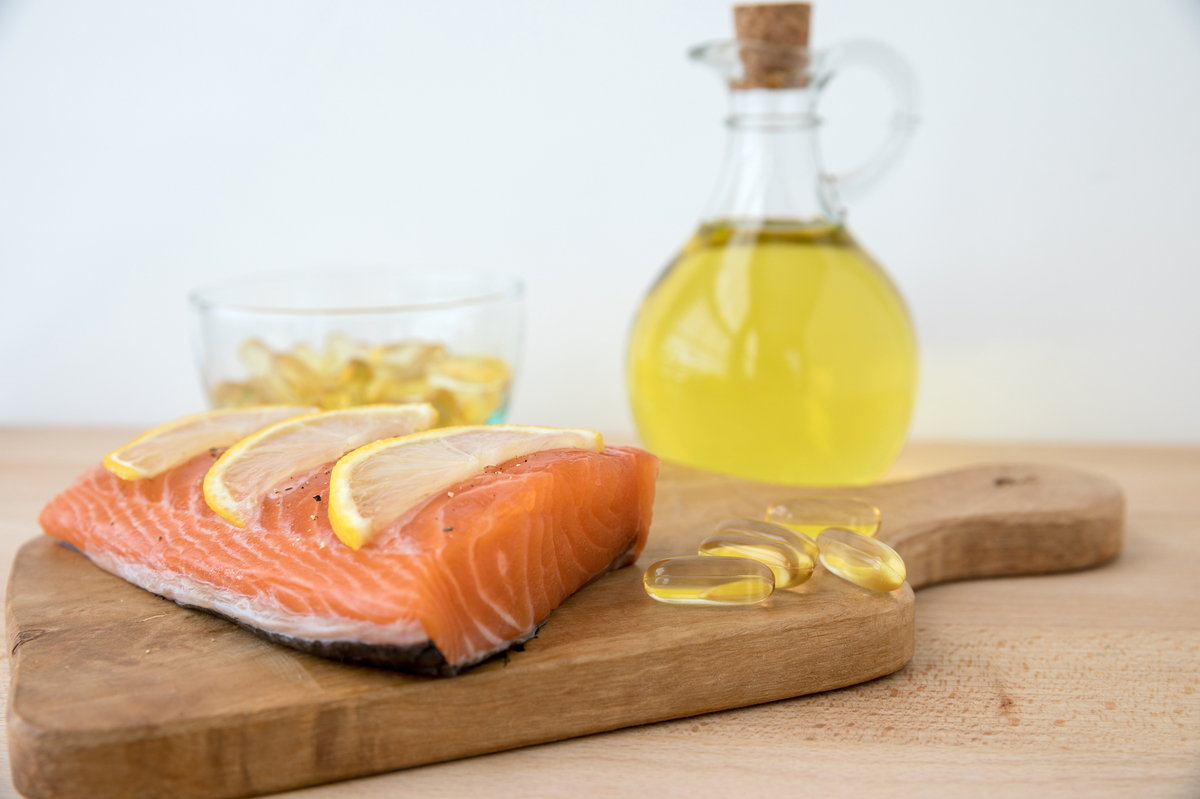 Eating fish can protect against heart disease but many people don't eat enough to be effective. In November, an FDA panel recommended broader use of a prescription-strength fish oil drug Vascepa for people at higher risk of heart disease.

It's long been known that eating fish — especially cold-water fish such as salmon that are rich in omega-3 fatty acids — is good for heart health.

But, for the millions of Americans who are at high risk of heart disease, eating enough fish to make a difference isn't likely to be realistic for most.

There's growing evidence that taking a very high dose of purified fish oil, delivered in a prescription pill, can help prevent heart attacks and strokes among people who have elevated risks. The amount of fish oil in the daily recommended dose of the pill is the equivalent of eating about eight to 10 servings of salmon a day.

In early November, an advisory panel to the FDA voted unanimously to approve expanded use of the prescription drug, Vascepa, which is made from one type of omega-3 fatty acid, called eicosapentaenoic acid, or EPA for short. The oil is extracted from sardines and anchovies, and then purified.

Currently, Vascepa is already approved for use in people with very high levels of triglycerides — which is a type of fat in the blood. (You can check your triglycerides as part of a cholesterol screening.)

Now, the drug may soon be approved for use for a much wider group of Americans: people who've already had a heart attack or stroke, as well as people who have Type 2 diabetes and an additional risk factor such as high blood pressure.

This could add up to millions of adults in the U.S., given the prevalence of Type 2 diabetes and other risk factors.

"The panel felt very strongly that this fish oil product [Vascepa], taken in addition to statins, reduced cardiovascular disease," says Peter Wilson, a professor of medicine at Emory University, who was on the FDA advisory panel.

(Wilson does not have any financial ties to the drugmaker.)

Statin medications work well to reduce LDL cholesterol, the so-called bad cholesterol. Statins can also help to reduce triglycerides to some extent. But adding fish oil can have an added benefit of further reducing triglycerides — which can help lower the risk of heart disease.

Evidence comes from a clinical trial that included about 8,000 people who had established cardiovascular disease or diabetes and other risk factors. One group of participants took 4 grams of the fish oil drug per day; others took a placebo. The trial lasted nearly five years.

"The trial showed convincing evidence for reduction of heart attack, stroke and and cardiac-related death, approximately a 25% reduction," Wilson says. The results were published in the New England Journal of Medicine.

When it comes to over-the-counter fish oil supplements, which are widely available at grocery stores and drugstores, there's mixed evidence of effectiveness.

"Some studies show benefit, some not," explains Dariush Mozaffarian, a cardiologist who is dean of the Friedman School of Nutrition Science and Policy at Tufts University. He says almost all the studies have tested relatively low doses, such as 1 gram a day.

By comparison, the prescription drug, at a dose of 4 grams a day — delivers much more fish oil. Mozaffarian says people with elevated triglycerides benefit from the higher doses. "The more you take, the more triglycerides are lowered," he says.

(Mozaffarian is involved in separate clinical trials of different omega-3 and fish oil drugs and receives honorarium payments from the Cleveland Clinic Foundation.)

In addition to delivering a higher dose, some medical experts say a prescription formulation of fish oil may be more reliable than a dietary supplement.

"Pharmaceutical drugs are regulated by the FDA, so the manufacturing has to meet high standards, so you can be sure that when you take it you are getting the amount listed on the label, and it is safe and free of impurities," says Cecilia Low Wang, another member of the FDA advisory panel and a professor of medicine at the University of Colorado School of Medicine.

(Low Wang has no financial ties to the companies producing pharmaceutical fish oil.)

"Dietary supplements are not held to the same standard and are not required to demonstrate this level of quality, safety or effectiveness before being marketed," Low Wang says.

For healthy people who don't have elevated risks for heart disease, eating fish is a good way to get omega-3s. "For the general population, I recommend people eat fish or seafood — one or two servings a week," Mozaffarian says.

There are also plant-based sources of omega-3s such as flax seeds, chia seeds, walnuts, soy foods and pumpkin seeds.

As for the recommendation to expand the use of Vascepa, the FDA typically follows the advice of its advisory panels and is expected to decide on expanded approval by the end of the year.

The cost of the drug is about $300 per month. Out-of-pocket costs to people who are prescribed the drug would be lower depending on insurance coverage and copays.