Accessibility links
Bill Of The Month: Girl's Doll Shoe Extraction Cost $2,659 : Shots - Health News A young girl put matching doll shoes up her nose. One came out easily. The second required a trip to the hospital emergency department and led to a bill that isn't child's play. 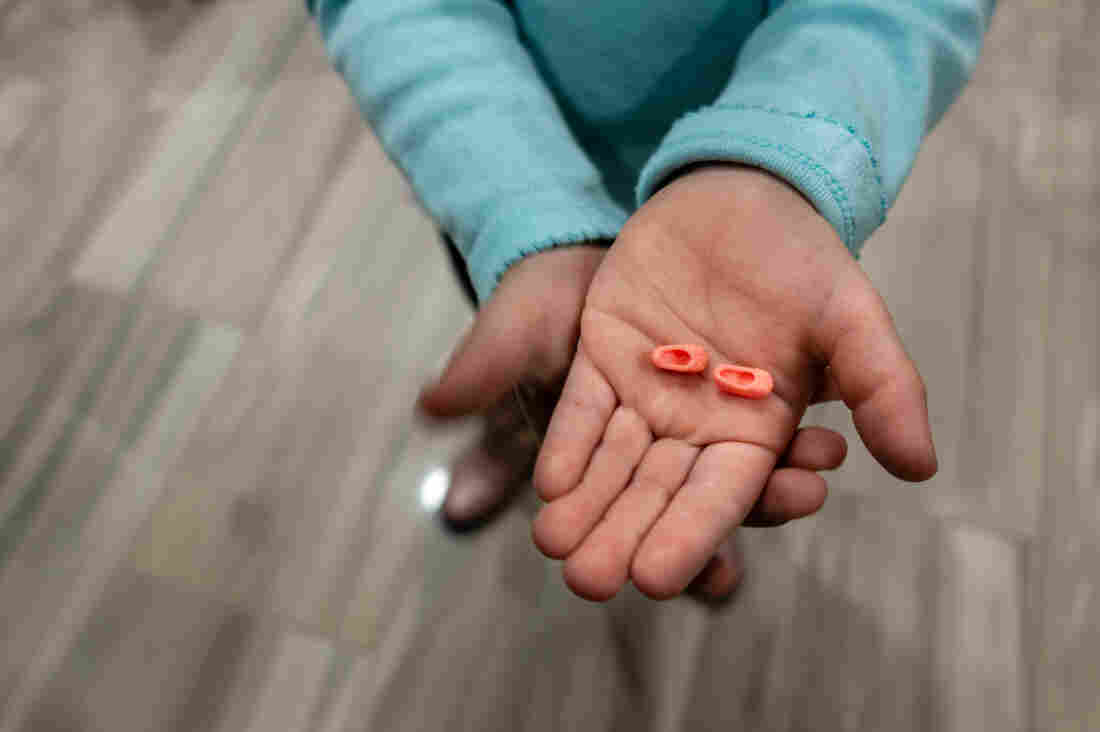 Lucy Branson, now 4, holds Polly Pocket shoes like the ones she put in her nose. Heidi de Marco/KHN hide caption 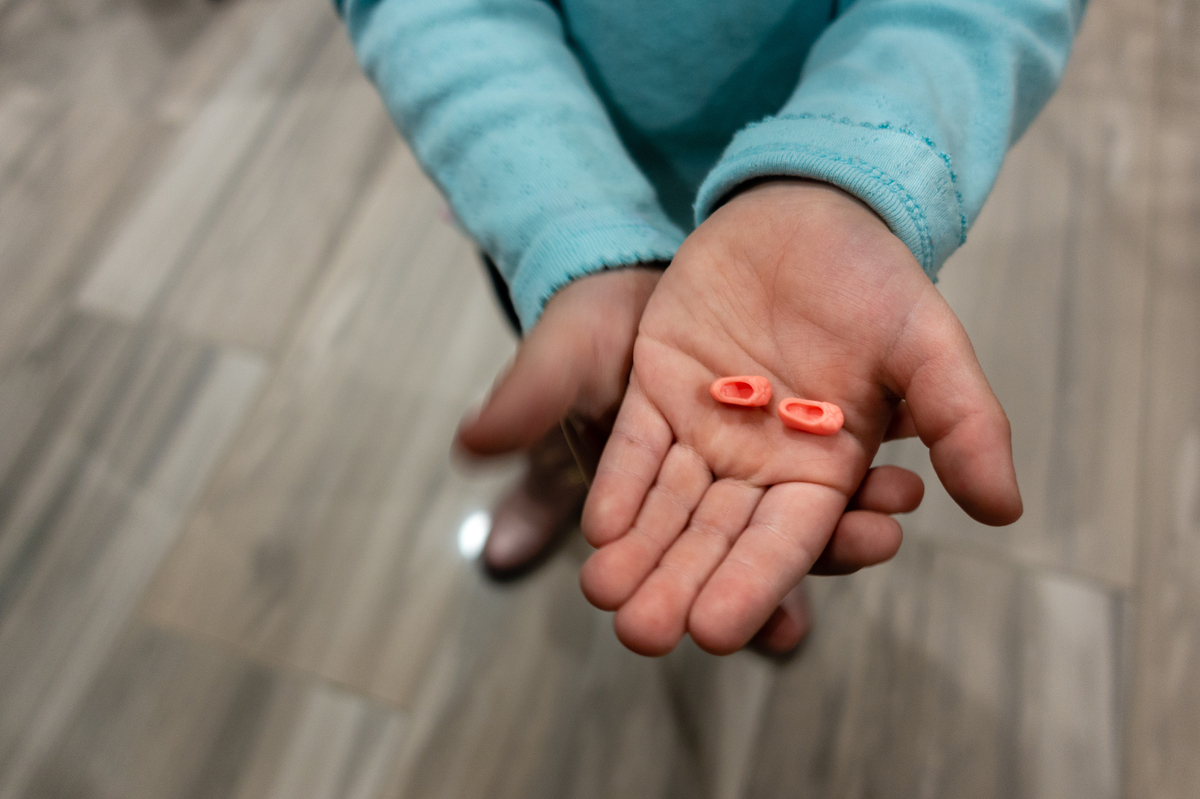 Lucy Branson, now 4, holds Polly Pocket shoes like the ones she put in her nose.

It was supposed to be a fun evening out for Katy and Michael Branson. But their daughter Lucy, who was 3 at the time, apparently had other ideas.

The couple had tickets for a Saturday night show in April in their hometown of Las Vegas and had arranged for a sitter to watch their two girls. But as Mom and Dad were getting dressed, Lucy came upstairs to their bedroom coughing and looking rather uncomfortable.

"I think she has something up her nose," Michael said.

For reasons she couldn't quite explain, Lucy had shoved a matching pair of pink Polly Pocket doll shoes up her nose — one in each nostril.

Her parents tried to get her to blow her nose to dislodge the plastic footwear, but Lucy could do no better than a few sniffs. Katy found a pair of tweezers and was able to remove one shoe, but the second was too far up her tiny nose for them to reach.

Michael took Lucy to a nearby urgent care center, where the doctors had no more luck with the tweezers — called forceps in medical parlance — they had on hand and suggested he take her to the emergency room. There, a doctor was able to remove the shoe in less than a second, as Michael recalled it, with a longer set of forceps. The doctor typically finds Tic Tac mints up there, he told them. This was his first doll shoe extraction.

"All in all, it was an eventful evening," Katy said. "My husband makes it back, we go to the show, my daughter's fine."

The Bransons figured they had weathered another typical night of parenting and didn't give it much more thought. Then the bill came.

The patient: Lucy Branson, now 4, a precocious girl with a fondness for any sort of doll. She is insured through her father's high-deductible plan with UnitedHealthcare. 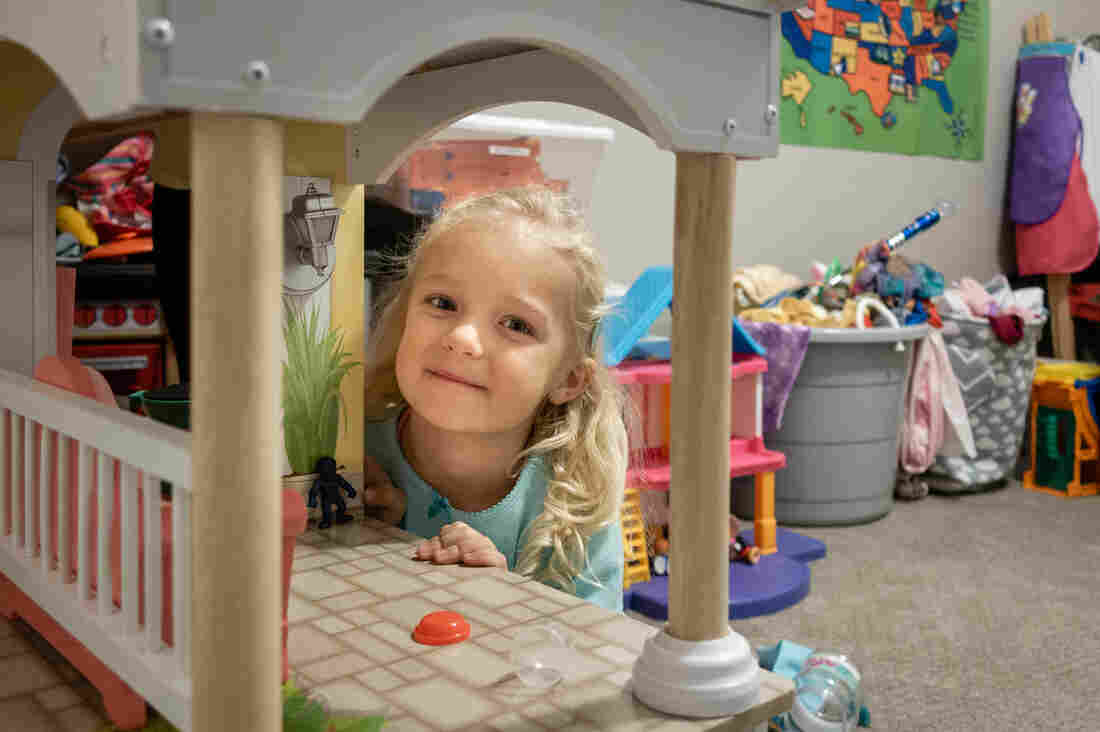 Lucy shoved a matching pair of pink Polly Pocket shoes up her nose and had to visit the emergency room to have one removed. Heidi de Marco/KHN hide caption 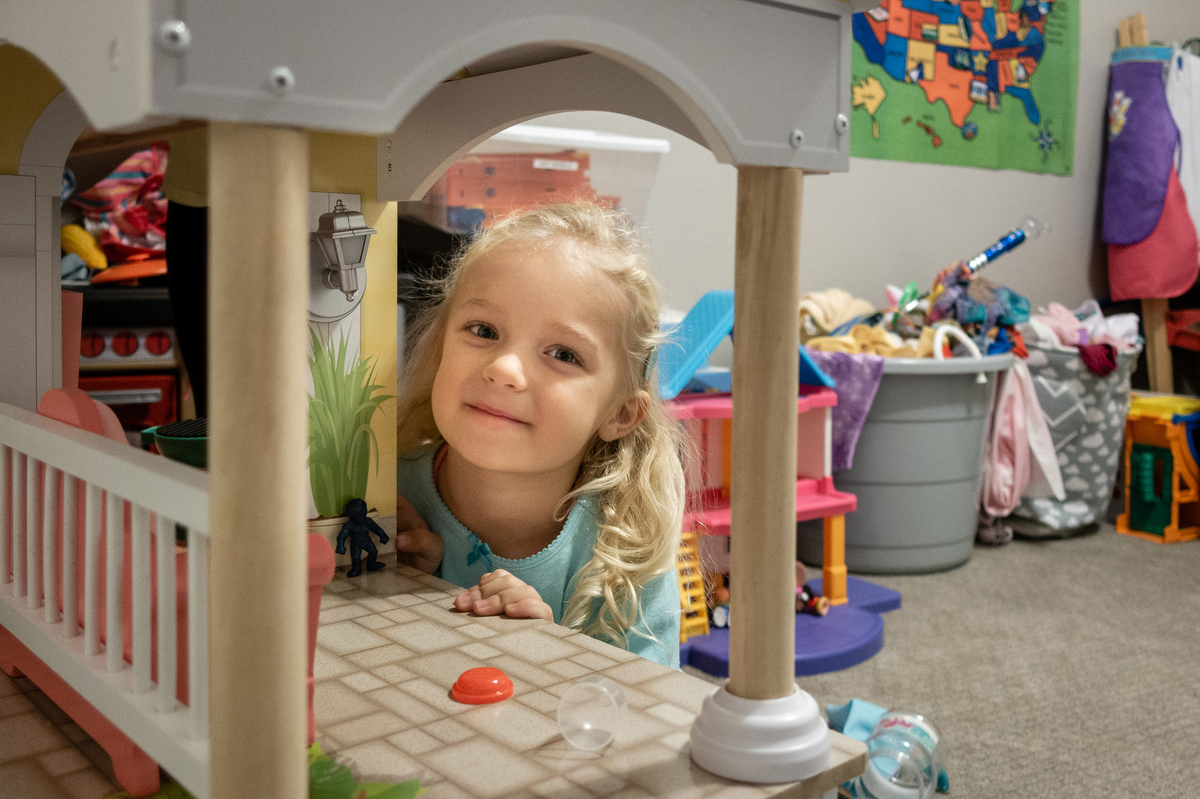 Lucy shoved a matching pair of pink Polly Pocket shoes up her nose and had to visit the emergency room to have one removed.

Medical procedure: Removal of a foreign body in the nose, using forceps.

What gives: The Bransons negotiated a reduction of the physician's bill by half by agreeing to pay within 20 days. But Dignity Health declined multiple requests for an interview or to explain how it arrived at the $1,732 total for the ER visit.

"Not every urgent situation is an emergency," the hospital said in an emailed statement. "It is important for patients to understand the terms of their health insurance before seeking treatment. For example, those with high-deductible plans may want to consider urgent care centers in nonemergency situations."

The hospital billed the Bransons $1,143 for the emergency room visit and an additional $589 for removing the shoe. The entire $1,732 hospital bill was applied against their deductible. 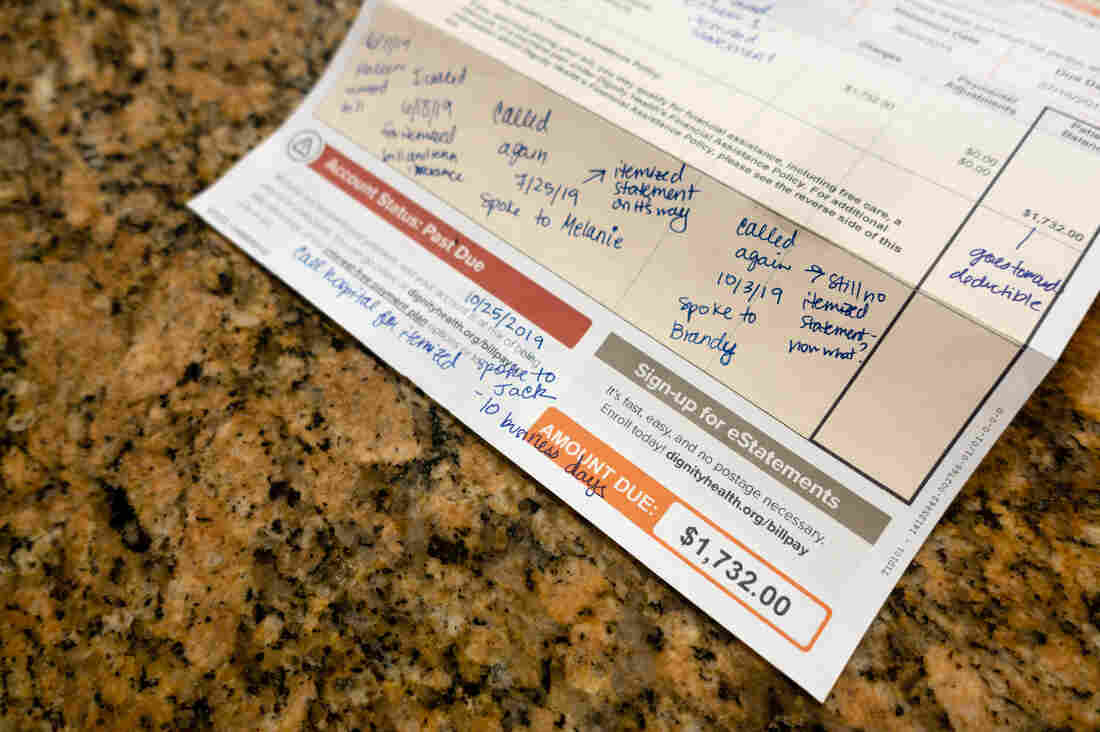 The Bransons received a $2,658.98 bill, including a $1,732 charge for a visit to the hospital emergency department. Michael Branson first took Lucy to a nearby urgent care center, where doctors had no luck and suggested she go to the ER. Heidi de Marco/KHN hide caption 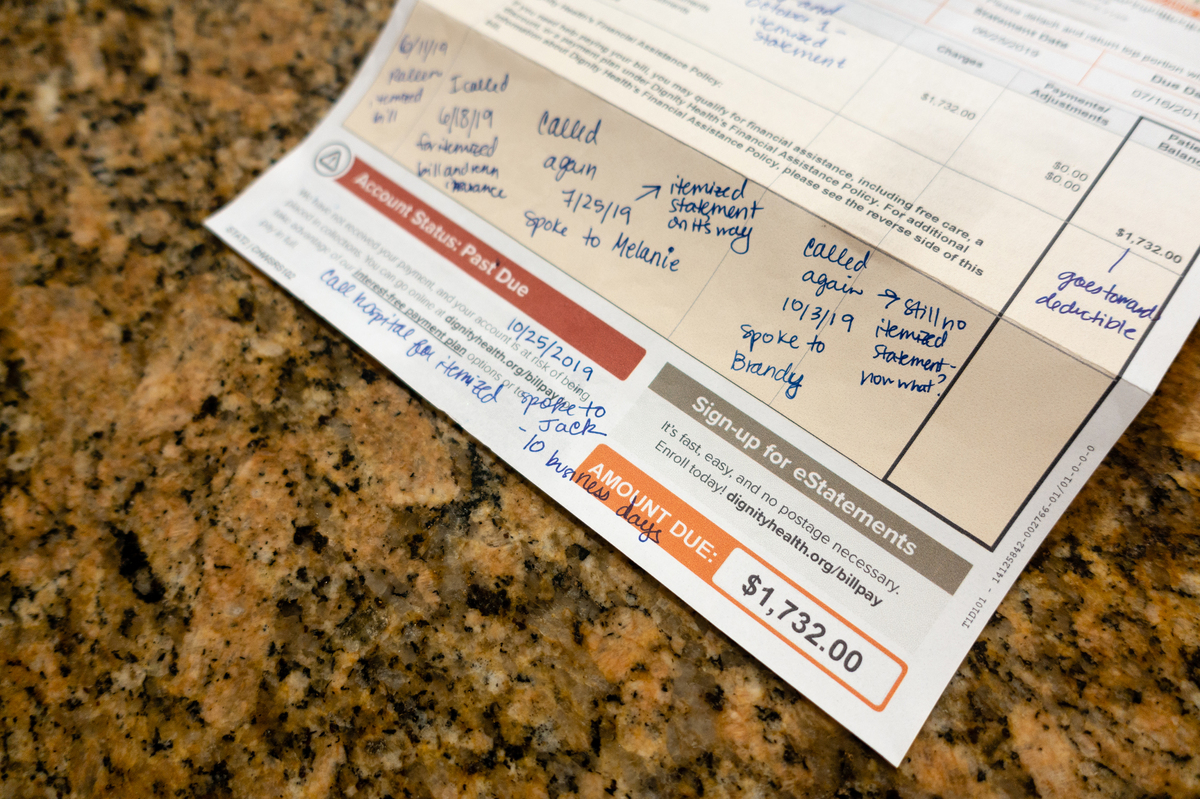 The Bransons received a $2,658.98 bill, including a $1,732 charge for a visit to the hospital emergency department. Michael Branson first took Lucy to a nearby urgent care center, where doctors had no luck and suggested she go to the ER.

For public health plans like Medicare or Medicaid, the hospital generally bills an average of $526 for removing a foreign body from the nose and gets an average payment of $101, according to WellRithms, a medical billing review firm.

According to cost reports submitted to Medicare, the hospital's average cost for the procedure comes to less than $48. That's less than a quarter of the $222 fee WellRithms recommended and well below the $589 St. Rose charged the Bransons.

The Bransons had options as they chose their employer-sponsored health plan. They picked one with a high deductible of $6,000 per year. So instead of paying $500 more a month in premiums, the family could pocket that difference if it avoided any major health problems.

"I'd rather gamble that I might have to pay it, versus commit to paying it every month," Katy said.

The Bransons were ready to cover the full deductible for any emergency that might arise. They just never thought something as simple as extracting a plastic shoe with tweezers would garner such a big bill.

Removing a foreign body from a child's nose or ear is a fairly common procedure in emergency rooms, with the variety of objects removed from noses limited only by the size of the nostrils.

"Kids like to put things in their nose or their ears, for whatever reason," said Dr. Melissa Scholes, an ear, nose and throat specialist with the University of Colorado School of Medicine.

Scholes recently reviewed records for 102 children who came to Children's Hospital Colorado from 2007 to 2012 with objects stuck in their noses. About a third of those patients were referred to an ear, nose and throat clinic, and about half of those required surgery to remove the object. Doctors were able to remove the object in the emergency room in the remaining two-thirds of cases.

Scholes said pediatricians don't often have the necessary tools to remove the object. Those can include extralong tweezers or a catheter with a balloon on the end. The tip of the catheter is snaked past the object, then the balloon is inflated and the catheter is pulled out, dislodging the foreign body.

"People don't really have a good grasp of the anatomy of the nose, because a lot of people think it's just like a tube," Scholes said. "It's a big cave once you get past the nostrils. So once things get back far enough, you kind of lose them."

Resolution: The Bransons are still fighting to get a detailed explanation of how Dignity Health calculated its bill.

"It's not even so much that we can't pay that if we absolutely have to," Katy said. "It doesn't make sense that it costs that much. A human being needs to look at this and say, 'Why are we charging $3,000 to take a Barbie shoe out of the kid's nose?' "

After all, Katy doesn't own a single pair of shoes worth anywhere close to $3,000 herself.

"Well, apparently, now I have one," she said. "But they're not in my closet; they're in the playroom." 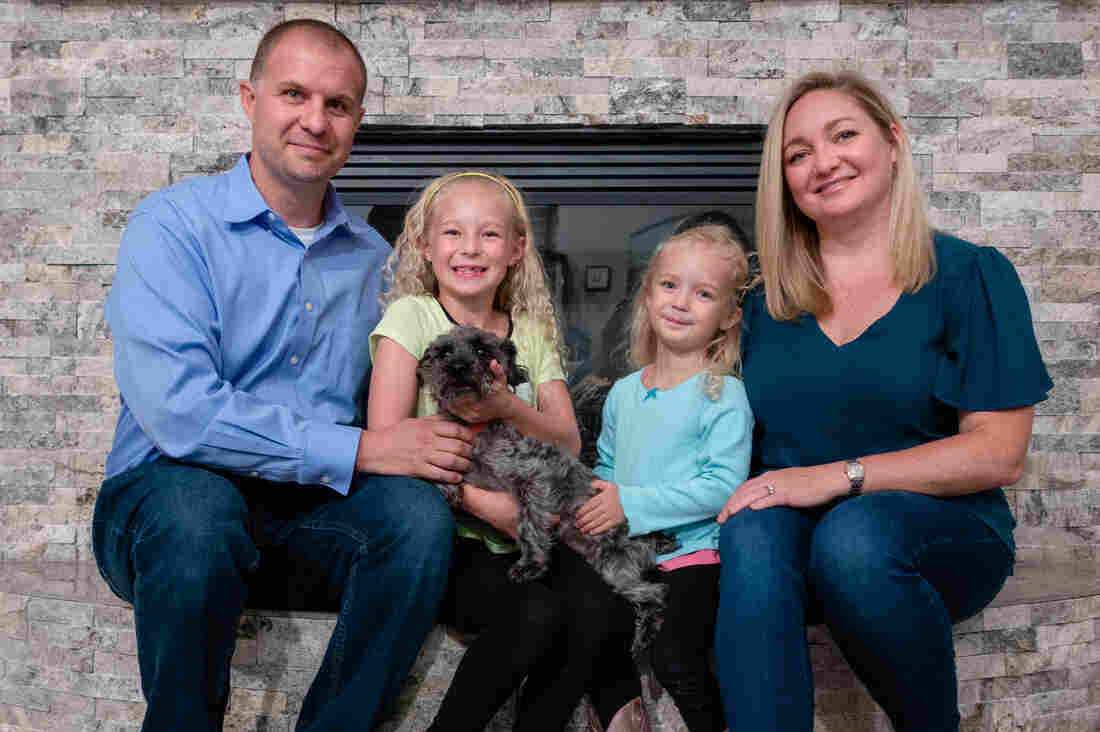 The Branson family was surprised by the bill after Lucy (second from left) needed to get a tiny doll shoe removed from her nose. Heidi de Marco/KHN hide caption 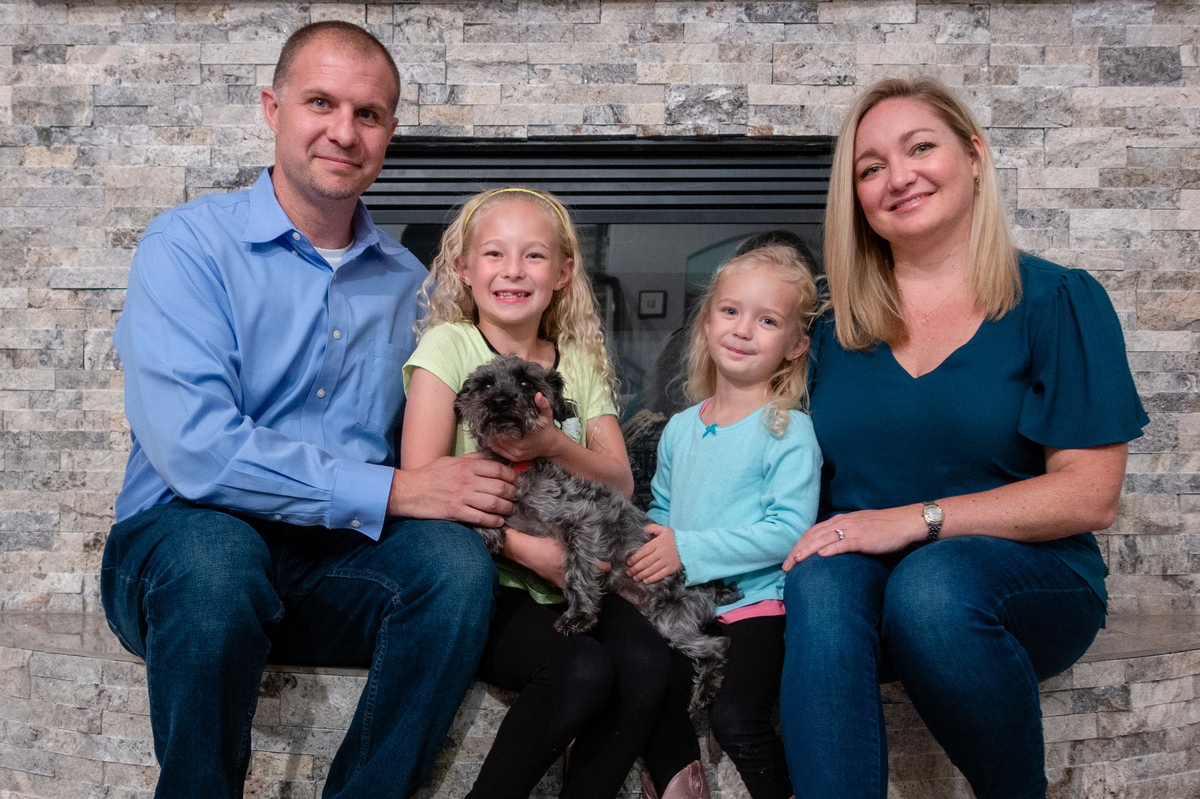 The Branson family was surprised by the bill after Lucy (second from left) needed to get a tiny doll shoe removed from her nose.

The takeaway: Check with your doctor if you can about whether a medical issue constitutes an emergency or if it can wait until morning.

Sometimes your pediatrician's office can recommend a do-it-yourself method for removing an object in the nose to avoid a costly emergency room visit.

Known as the "mother's kiss," Mom covers the child's mouth with her mouth to form a seal, blocks the clear nostril with her finger and then blows into the mouth. The pressure from the breath may then expel the object. (The technique works equally well when performed by dads.)

For parents whose children have put things up their noses, Scholes said such objects rarely move much and can generally wait until an appointment the next morning. Having the object removed without the ER facility fee will be cheaper.

In terms of the bill, the Bransons were smart to negotiate right away, and they succeeded in getting a significant discount from the original. Many hospitals offer what they like to call "prompt-pay discounts" (often 10% to 25%). For hospitals, getting the cash quickly is valuable and even billing clerks may be able to approve the discount on the spot.

But don't jump at the first discount they offer. And don't let an outrageous bill sit on the kitchen table as you get angrier and angrier. Start haggling and hassling ― and keep it up. After all, a 25% percent discount off a highly inflated bill results in one that is only slightly less outrageous, as the Bransons found out the hard way.