Accessibility links
Opinion: ER Boarding Is A 'National Crisis' That Needs A Solution : Shots - Health News Patients in hospital ERs can wait hours for inpatient beds to open up. The delays can be maddening. A solution for this long-standing problem has been elusive in the U.S., despite progress elsewhere. 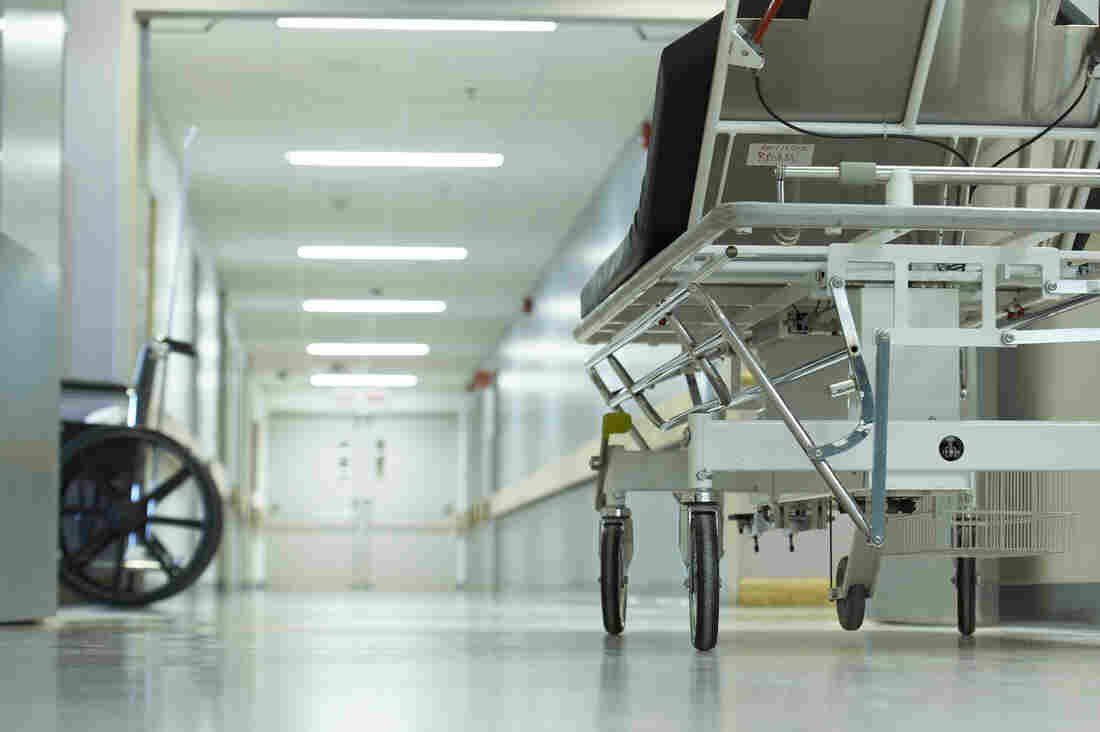 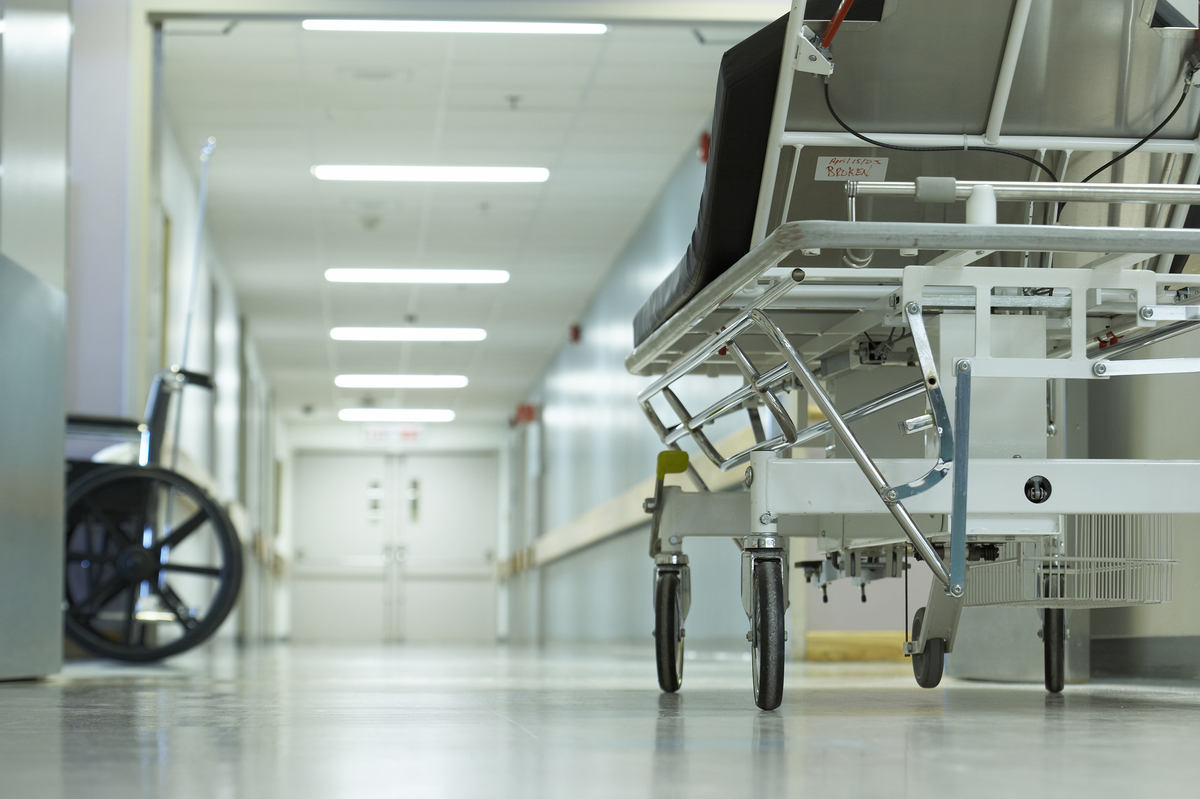 Waits for inpatient beds are an important factor in ER overcrowding.

On a good day in the emergency room where we work, patients who need to be admitted to the hospital might expect to wait four or five hours, including evaluation and treatment, before they are sent upstairs to a ready bed.

On a bad day, ER patients might wait two or three times as long, and sometimes much longer.

Recently, one of us cared for a bedridden patient with chest pain who spent 47 hours in an ER hallway before a spot became available in the cardiac unit.

Keeping patients in the ER while waiting for an inpatient bed — a practice known as boarding — isn't unique to the busy teaching hospitals where we work. According to the Centers for Disease Control and Prevention, most American hospitals have boarded patients in the ER for more than two hours while waiting for an inpatient bed.

It's a stubborn problem. A 2001 study suggested that as many as 1 in 5 ER patients is boarded. In 2006 the Institute of Medicine identified boarding as part of a "national crisis" affecting emergency care. In 2016, two-thirds of hospitals reported boarding patients in the ER or an observation unit for more than two hours, compared with 57% in 2009.

Waiting hours for a hospital bed can be maddening for patients and their families. Sometimes literally. Researchers recently found that long waits in ER hallway beds are associated with delirium, a medical condition defined by confusion and disorientation.

But boarding in the ER affects much more than patients' state of mind. The American College of Emergency Physicians has identified boarding as one of the most important factors in ER overcrowding. And overcrowding, in turn, has been associated with everything from delays in administration of pain medication and antibiotics to longer inpatient stays, greater exposure to medical error, delayed treatment for heart attack and even increased mortality.

To understand why boarding can have so many negative consequences, think of a busy school cafeteria at lunch. No matter how efficient the cafeteria workers are at making and serving the food, processing payment and getting people through the line, no one can sit down to eat if all the tables are occupied with other students.

In our case, the emergency department can be remarkably effective at diagnosis and treatment. But if there's nowhere for admitted patients to go, the whole operation gets bogged down and everyone's care suffers.

If boarding is such a problem, why do hospitals allow it to continue?

The answer, as with so many things in our health care system, is complicated. But it has a lot to do with money.

Since 1975 the number of hospitals in America has declined by 30%. That's more than 1,500 hospitals shuttered, with half a million beds lost.

Market forces have been largely responsible, as technology became more expensive, reimbursement rates were curtailed and hospitals either merged or went bankrupt. Meanwhile, annual ER visits have increased by nearly 50 million since 1995.

It looks like a basic supply and demand problem.

But here's a curveball: Most hospitals operate, on average, at only about 65% of their total inpatient capacity — and this number has actually dropped since 1975.

Reimbursement is a key part of the puzzle.

Medicare, which provides insurance for about 60 million Americans, sets the bar for how much hospitals are paid, from treating pneumonia to neurosurgery. And those reimbursement rates have strongly favored invasive procedures like surgery, colonoscopy and cardiac catheterization.

Simply managing medical conditions in the hospital is much less lucrative.

Hospitals have a strong financial incentive to prioritize these procedures and to give latitude to the specialists performing them in setting their schedules. As a result, dozens of surgeries might be scheduled for a Monday morning, just a handful the following day and almost none over the weekend.

This approach creates wide variation in the number of postoperative patients needing admission to the hospital on any given day. But one thing's for sure, a surge in post-op patients needing hospital beds means fewer beds for ER patients, which creates a bottleneck and leads to boarding. The variation in demand causes hospitals to swing between overcrowding and underutilization.

So even though we're seeing more patients in fewer hospitals, limited capacity may not be the primary issue. It's that we're using existing capacity inefficiently.

A 2012 review identified inefficiency rather than insufficient beds as the root cause of boarding. Other sources of inefficiency include restricting certain beds to certain specialties, skeleton staffing during nights and weekends and poor discharge planning.

The silver lining is that efforts to improve efficiency are much less expensive than building a new hospital wing. Smoothing out surgical scheduling, for one, has been shown to yield major improvements. Cincinnati Children's Hospital increased occupancy to 91% from 76%, made $137 million in extra revenue and avoided a $100 million expansion by rejiggering the surgical schedule and streamlining discharges.

Many hospitals are working on the problem. In the two teaching hospitals where we work in Boston, policies are in place to use observation units, affiliated community hospitals and even "home hospital," where patients receive care from teams that visit them at home, to spare inpatient beds.

Even so, other hospitals may be falling short. Researchers found in 2012 that a majority of the most crowded hospitals had been slow to adopt the most effective measures to alleviate the bed crunch.

Could legislation be the answer? Perhaps.

In 2005, Britain instituted a maximum length of stay of four hours for all ER patients. It worked — 94% of patients were meeting that goal by 2014, although hospitals there have slipped more recently. Australia, New Zealand and Canada have had similar successes.

A legislative mandate seems far-fetched in the U.S., given the current state of Congress. Medicare has begun offering financial incentives for hospitals to address boarding, and the major accreditation organization for hospitals introduced guidelines on how to improve boarding in 2014. Neither of these measures requires action, though.

Ultimately, we suspect that what is really needed is an overhaul of the current system of financial incentives and reimbursement, coupled with penalties for hospitals that fail to act on the problem.

Until then, we're sorry if you're still waiting for that bed.

Clayton Dalton and Daniel Tonellato are resident physicians at Massachusetts General and Brigham & Women's hospitals, both in Boston.