Accessibility links
Medicare's 'Plan Finder' Website Still Causing Big Problems : Shots - Health News With a deadline for Medicare enrollment looming, some lawmakers and advocates are concerned that Medicare hasn't done enough to reach out to consumers who might be affected by website problems.

Will Glitches In Medicare's 'Plan Finder' Leave Some Seniors Stuck In The Wrong Plan?

Will Glitches In Medicare's 'Plan Finder' Leave Some Seniors Stuck In The Wrong Plan? 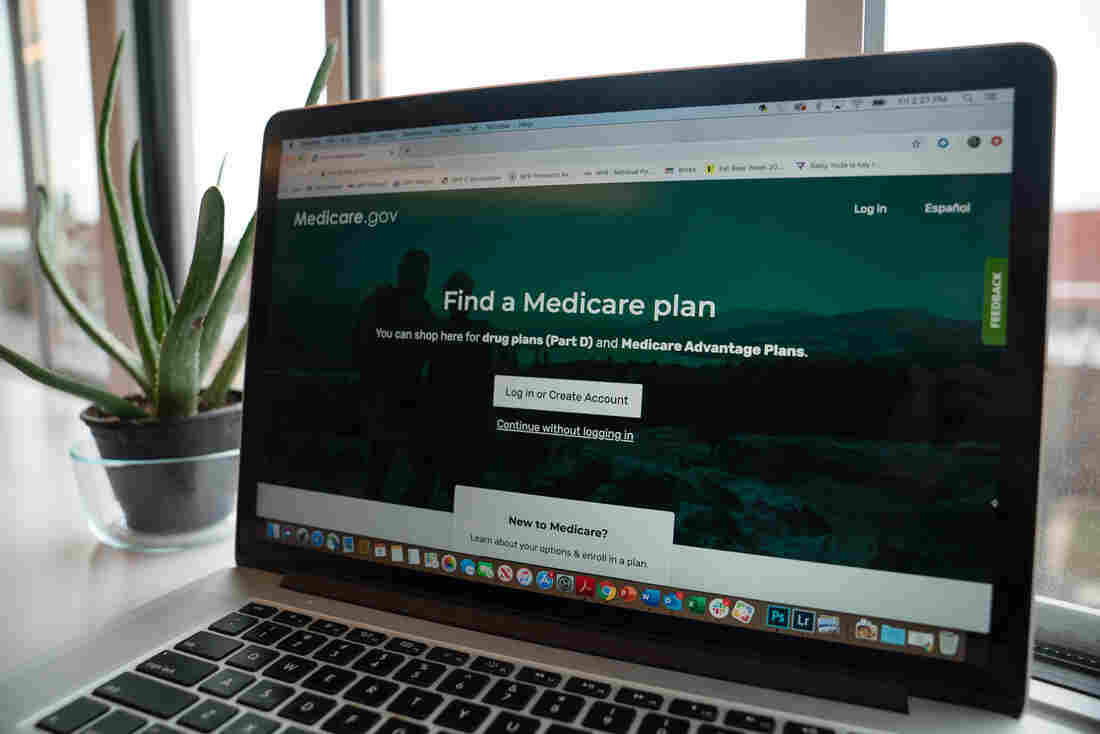 Medicare's overhauled Plan Finder debuted at the end of August. But health care advocates and insurance agents say the website has had big problems ever since, including inaccurate details about prices, which drugs each plan covers and their dosages. Catie Dull/NPR hide caption 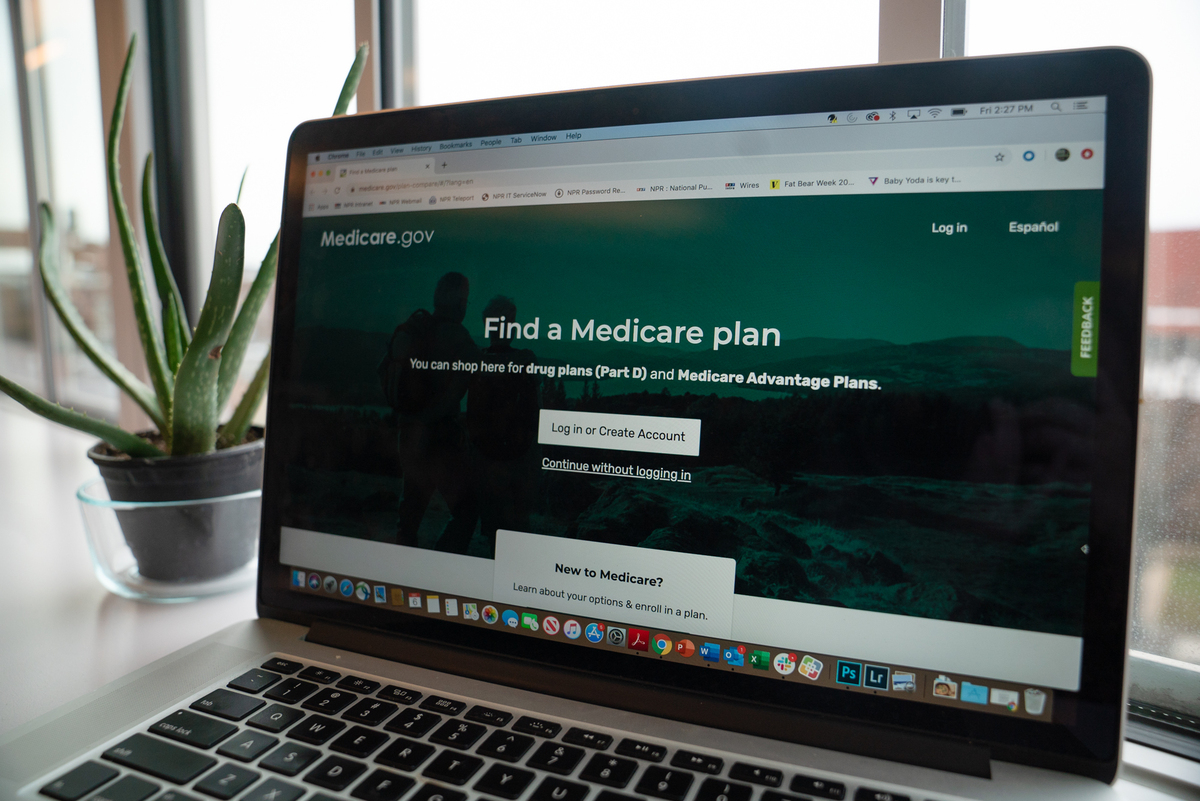 Medicare's overhauled Plan Finder debuted at the end of August. But health care advocates and insurance agents say the website has had big problems ever since, including inaccurate details about prices, which drugs each plan covers and their dosages.

Saturday is the deadline for most people with Medicare coverage to sign up for private drug and medical plans for next year. But members of Congress, health care advocates and insurance agents worry that enrollment decisions based on bad information from the government's revamped, error-prone Plan Finder website will bring unwelcome surprises.

Beneficiaries could be stuck in plans that cost too much and don't meet their medical needs — with no way out until 2021.

Targeting 'Medicare For All' Proposals, Trump Lays Out His Vision For Medicare

On Wednesday, the Centers for Medicare & Medicaid Services assured Kaiser Health News in a written statement that beneficiaries would be able to change plans in 2020 if they needed to because of Plan Finder misinformation, though the statement provided few details on what steps consumers would need to take or what that process would entail.

And, as of Friday morning, the Medicare.gov website had no information alerting consumers to that option. Representatives reached at Medicare's call center Thursday, who were busy helping with last-minute enrollments, were unaware of it. On Friday, CMS said those representatives will be retrained and the website will be updated after the current enrollment season wraps up.

The problems cited included inaccurate details about prices, covered drugs and dosages, and difficulty sorting and saving search results, among other things.

Throughout the fall, CMS has made almost daily corrections and fixes to the website, which is the only tool that can compare dozens of private drug and medical plans ― each with different pharmacy networks, covered drugs and drug prices. The website provides information for more than 60 million people with Medicare and their families, as well as state Medicare counselors and the representatives who answer the 800-MEDICARE help line.

In an unsigned blog article published on a Medicare website last week, officials said they're "not done improving the Plan Finder." And, they promised, "in the coming months we'll be scoping out additional improvements that we can implement based on lessons we learn this year."

Although CMS has earned praise for responding to errors identified by Plan Finder users, some people may have signed up for plans before the mistakes were caught ― mistakes they may not notice until their coverage kicks in next year. Some lawmakers and advocates are concerned that Medicare hasn't done enough to reach out to consumers who might be affected by website problems.

"Seniors should be able to choose the plans that work best for them," says Sen. Susan Collins, R-Maine, chairwoman of the Senate Special Committee on Aging. "Issues with Medicare's new Plan Finder website, however, have reportedly created confusion among beneficiaries as well as those assisting them." Collins adds that she is concerned "this problem even occurred."

Sen. Bob Casey of Pennsylvania, the senior Democrat on that committee, also says Medicare needs to reach out so people know they can request a "special enrollment period" if they discover next year they made a wrong choice because of inaccurate Plan Finder information.

"People with Medicare must be aware that this reprieve exists and should not have to jump through hoops to qualify," he says. The administration should "use all means necessary" to let beneficiaries know about their options for a special enrollment period.

Fifteen Senate Democrats, led by Casey, sent a letter this week to Medicare Administrator Seema Verma asking the agency to "widely publicize the existing [special enrollment period] for people who were misled by information" in the Medicare Plan Finder and to make switching plans easy.

In a written statement to Kaiser Health News on Wednesday, a CMS spokesman noted that Medicare has always provided extra time for certain people to enroll, for a number of specific reasons. In keeping with that policy, Medicare beneficiaries will be able to get a special enrollment period related to Plan Finder issues anytime next year, according to the statement.

They can "call 1-800-MEDICARE and explain to our call center representatives that they have an issue with their plan choice. It is not CMS's expectation that beneficiaries will have documentation or screenshots," according to the CMS statement. Beneficiaries will be able to start the process of changing plans during that call, CMS said.

Yet some critics fear that applying for a special enrollment period because of Plan Finder's mistakes could be tricky. Trump administration officials have continued to defend the accuracy of the website tool.

In the CMS blog article posted Nov. 27, Medicare officials described the information on Plan Finder as "the most current and accurate information on premiums, deductibles and cost sharing that Medicare Advantage and Prescription Drug Plans provide." They seemed to shrug off the widespread complaints about Plan Finder, noting that the "information changes frequently because plans regularly update drug formularies and renegotiate drug prices."

America's Health Insurance Plans, the trade group representing health insurers, "is not aware of any systematic problems with the Plan Finder, which is operated by CMS," says spokeswoman Cathryn Donaldson.

People who enroll in a private Medicare Advantage policy, an alternative to traditional government-run Medicare that covers both drugs and medical care, already have extra time to switch. They have until March 31 to change plans or enroll in traditional Medicare before being locked into their plan.

Collins and Casey are not the only members of Congress raising concerns about Medicare applicants who may have been tripped up by the faulty website. Sen. Sherrod Brown, D-Ohio, wants CMS to provide a special enrollment period in these cases and clearly communicate the details, a spokesman from his office said.

Rep. Richard Neal, D-Mass., who chairs the House Ways and Means Committee, believes Saturday's deadline should be extended, a committee aide said. The committee has heard about the Plan Finder's problems from numerous advocates for seniors and counselors from state health insurance assistance programs, as well as from the insurance companies that sell coverage.

Since enrollment for 2020 coverage began on Oct. 1, the National Association of Health Underwriters, which represents 100,000 insurance agents, has sent CMS officials notice of 54 Plan Finder problems and is still receiving reports from insurance agents, said John Greene, the vice president for congressional affairs.

Leslie Fried is an attorney in Washington, D.C., who has specialized in elder law since 1985, so imagine her surprise when she was stumped last weekend helping her own mother pick a policy through the Plan Finder.

Fried, who is also senior director of the Center for Benefits Access at the National Council on Aging, did the same search three times for the least expensive plans that cover her mother's drugs and came up with a different result each time.

"Beneficiaries should be able to have confidence in the Plan Finder after a single search," Fried said.

For assistance reviewing drug and medical plans, call your state's Senior Health Insurance Information Program at 877-839-2675 or the Medicare Rights Center at 800-333-4114.