Accessibility links
Court Challenge To The ACA Could Overturn More Than You Realize : Shots - Health News Though it has been on the books for nearly a decade, the Affordable Care Act faces a big court challenge right now that could overturn it. Here's what happens if the federal health law goes away. 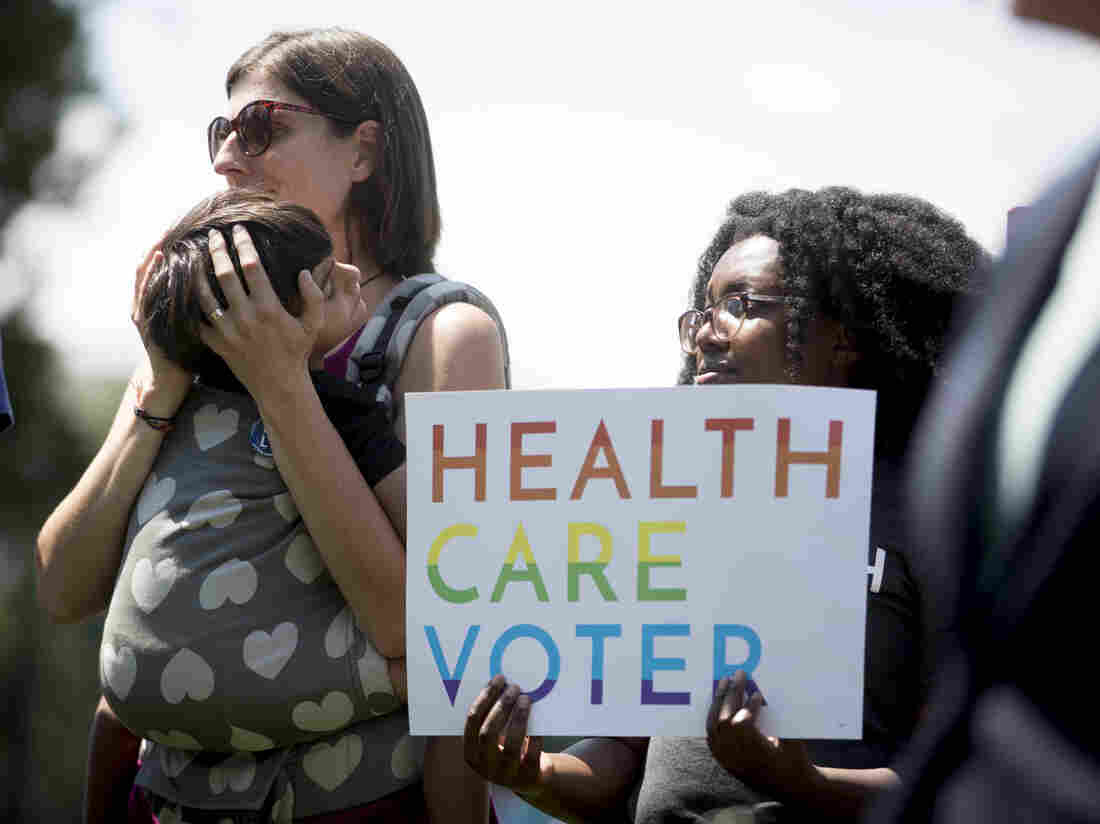 Families affected by preexisting medical conditions attend a Capitol Hill news conference in 2018 in support of the Affordable Care Act. Prior to the ACA, insurers could refuse to cover people who had even mild preexisting conditions — or charge them much more. Andrew Harnik/AP hide caption 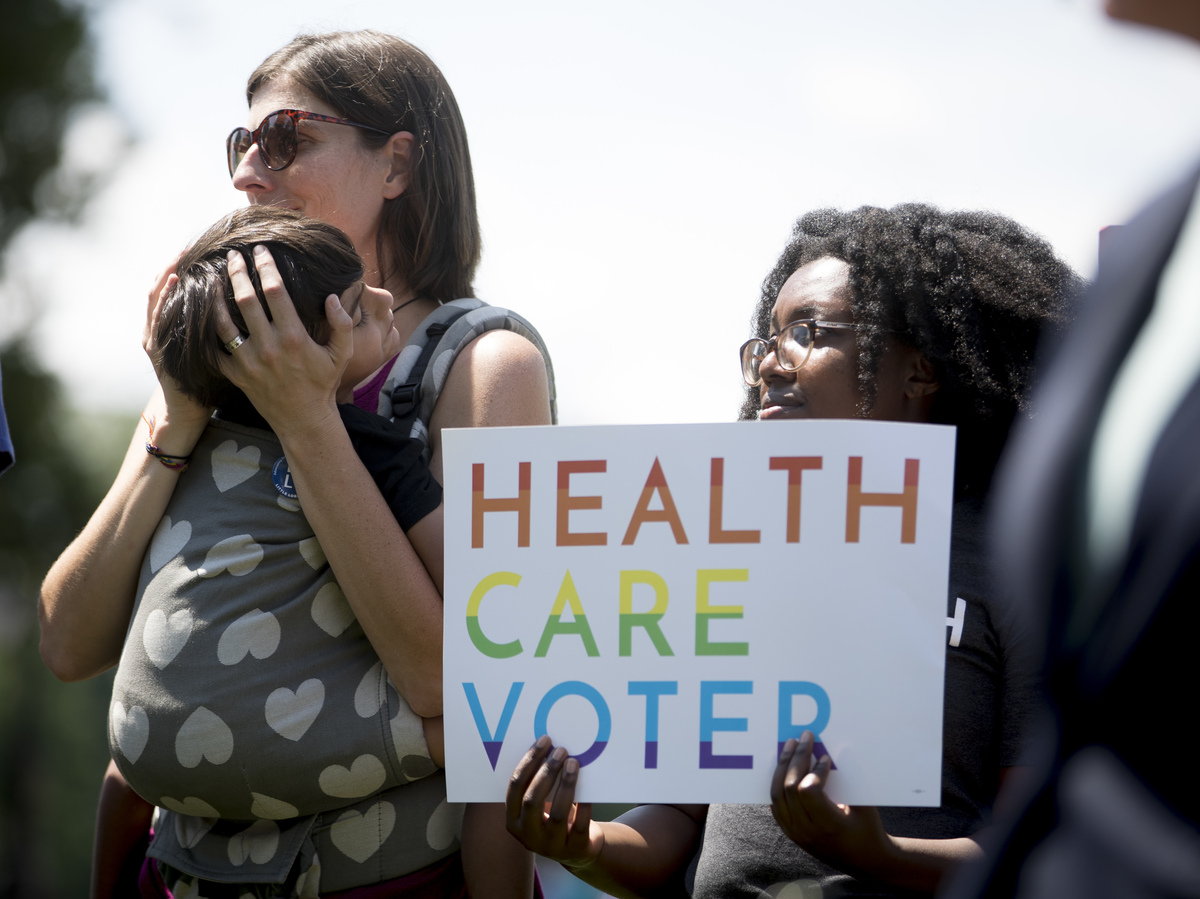 Families affected by preexisting medical conditions attend a Capitol Hill news conference in 2018 in support of the Affordable Care Act. Prior to the ACA, insurers could refuse to cover people who had even mild preexisting conditions — or charge them much more.

Any day now, the 5th U.S. Circuit Court of Appeals in New Orleans could rule that the entire Affordable Care Act is unconstitutional.

At least it seemed that two of the three appeals court judges were leaning that way during oral arguments in the case, State of Texas v. USA, in July.

Trump administration health officials have said they will continue to enforce the health law, pending a final ruling from the Supreme Court. But that is not a guarantee that President Trump won't change his mind. That's what he did in 2017 in canceling some payments to health insurers.

Trump Is Trying Hard To Thwart Obamacare. How's That Going?

There's no doubt that invalidating the ACA in whole or in large part would have a dramatic effect on the U.S. health system — and not just for those 20 million or so Americans whose coverage directly flows from the law.

"Billions of dollars of private and public investment — impacting every corner of the American health system — have been made based on the existence of the ACA," said a brief filed by a bipartisan group of health policy experts. Declaring the law null and void "would upend all of those settled expectations and throw health care markets, and 1/5 of the economy, into chaos," they wrote.

And with health care continuing to be a top issue in the presidential campaign, both Democrats and Republicans could find themselves scrambling for a fast stopgap solution if the law were to suddenly go away.

At issue in the ACA case is whether the language in the 2017 Republican tax bill reducing to zero the tax penalty imposed for failing to have health insurance should render the rest of the law invalid.

A group of Republican state attorneys general and governors say it should. They argued that without the tax, the Supreme Court's justification for upholding the law in 2012 no longer exists and so the law is now unconstitutional. U.S. District Judge Reed O'Connor agreed with them last December.

Supporters of the law — including not just Democratic attorneys general but also the Democratic-led U.S. House — and bipartisan groups of legal and health policy scholars say that's just nonsense, that the law not only can function without the individual mandate penalty but is functioning now.

Which of the provisions that consumers have become accustomed to would vanish if the law were eventually struck down? Let's take a look.

Most people think the federal health law directly affects only those Americans who purchase their own insurance through the exchanges that the law created (and who get subsidies if their incomes are between 100% and 400% of the poverty level). That's about 10 million to 12 million households.

But many of the insurance protections in the ACA also protect those who have insurance through their jobs. These provisions include allowing adult children to stay on their parents' health plans and requiring that insurers cover people who have preexisting health conditions — at no additional charge to those patients. The law also requires that ACA-compliant policies provide preventive care with no out-of-pocket cost, and it bans annual and lifetime cost limits on what insurers will cover.

That makes for a lot of chaos right there should the entire law disappear. But there is more.

Many Medicare and Medicaid benefits

Most people with a passing familiarity with the health law know it expanded the Medicaid program for those with incomes up to 138% of the poverty level (at least in states that opted into the program).

The law also made big changes to the Medicare program, including closing the notorious "doughnut hole" that had left some seniors with big drug bills despite having insurance. The ACA also extended coverage of preventive benefits for people who have Medicare coverage.

An important, though frequently overlooked portion of the health law created the first legal framework and regulatory pathway for less expensive copies of expensive, already FDA-approved biologic drugs to reach the market. Biologic drugs, which are typically antibodies, are among the most expensive medications sold and are typically used to treat life-threatening or highly debilitating ailments such as cancer, rheumatoid arthritis and macular degeneration. The copies are known as biosimilars — drugs found to be so similar in effect as to be interchangeable with an already-approved biologic.

It is unclear what would happen to the stream of biosimilars already approved if the law were struck down. Will their approvals be revoked? What about medications currently in the approval pipeline?

Among other little-known features of the ACA is a provision that permanently authorized funding for the U.S. Indian Health Service, which provides health coverage for more than 2.5 million American Indians and Alaska Natives. An overturn of the law could leave in doubt the legality of some of the program's operations.

Here's one more provision you may not have thought about: On the theory that if more people have health insurance then more people will seek medical care, the ACA has an entire section devoted to increasing the supply of not just physicians but nurses, therapists, dentists and community health centers. Many of these training programs could founder if the ACA were overturned.

And those now-ubiquitous calorie counts on restaurant menus? Those are there because of the ACA. Some people may not be sad to see those go away. But if the ACA is invalidated, the health system will likely change in ways that no one can predict.