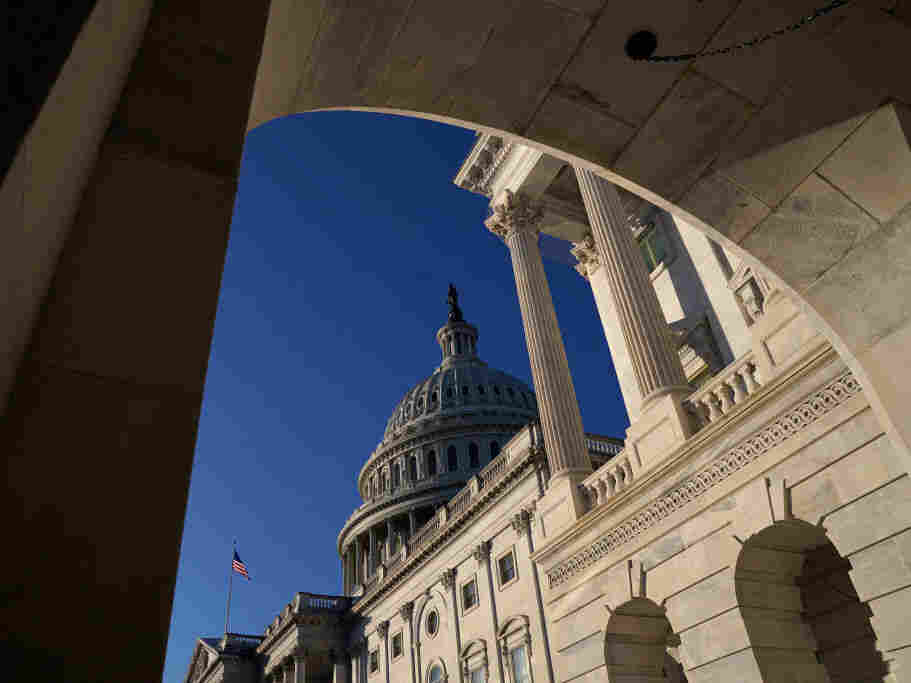 The spending bill to fund the government for the next fiscal year is expected to pass by Friday. Win McNamee/Getty Images hide caption 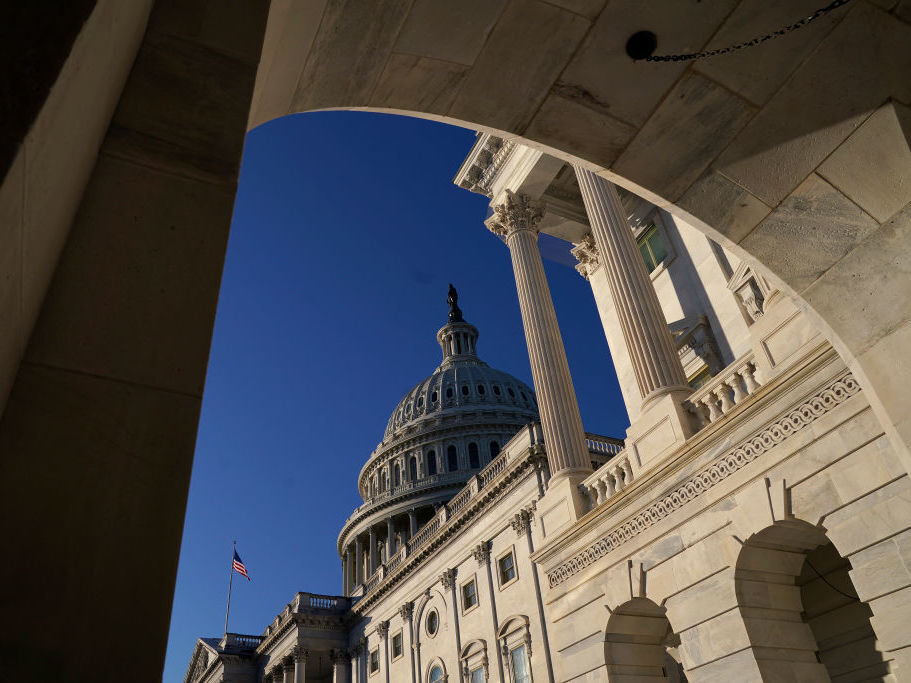 The spending bill to fund the government for the next fiscal year is expected to pass by Friday.

Congress is set to pass a $1.4 trillion spending package this week, which President Trump has said he'll sign. The legislation includes policy changes and funding increases that public health advocates are celebrating, as well as the permanent repeal of three key taxes that were designed to pay for Obamacare — a win for industry groups.

Notably absent from the spending package: legislation to address surprise billing or prescription drug prices. The House passed a prescription drug price bill last week, but a bill that can get through the Senate may be a long way off. Surprise billing proposals had support from both parties in both chambers of Congress as well as in the White House. Still, such legislation have proven difficult to nail down. Lawmakers involved say it is a priority for next year.

Our health reporting team took a look at what is in the package and picked out notable highlights, including some surprising policy reverses for Congress.

Repeal of health taxes designed to pay for ACA

When President Barack Obama signed the Affordable Care Act into law in 2010, he said: "It is paid for. It is fiscally responsible." But many of the taxes designed to cover the cost of expanding health coverage to 20 million people have been derailed. Now, the so-called "Cadillac tax" on generous employer health plans is getting permanently nixed, as are taxes on health insurance companies and medical-device makers.

Insurance industry groups applaud the move. But the repeal of these taxes alarmed many health policy and budget watchers. It will contribute $373 billion to the deficit, according to an estimate from Congress' Joint Committee on Taxation.

"So we're cutting the funding out from under Obamacare, but still doing all the spending," says Marc Goldwein, of the nonpartisan Committee for a Responsible Federal Budget. "This whole bill is about reversing the few hard choices that we made to pay for Obamacare."

"Everybody seems to want lower deficit in the abstract, but when it comes time to actually cut spending or raise taxes, there doesn't seem to be the political will in either party at the moment," he adds. —Selena Simmons-Duffin, health policy reporter

Raising the age to buy tobacco products to 21

The measure raises the federal age limit from 18 to 21 and would apply to both cigarettes and e-cigarettes.

At least 16 states and Washington, D.C., have raised the minimum age to buy tobacco products to 21, according to the American Lung Association. The organization, which has long campaigned to raise the federal age limit, said the move "will significantly reduce youth tobacco use and save thousands of lives."

The national conversation around tobacco age limits gained new momentum thanks to the surging numbers of teenagers who are vaping. The Trump administration had signaled that it planned to introduce an age limit. Some major tobacco companies have backed the idea, such as Altria, which owns Philip Morris USA and partially owns JUUL.

Advocates against vaping are also pushing for a federal ban on flavors for e-cigarettes, to make them less appealing to kids. Earlier this year, Trump had pledged to impose a flavor ban but has appeared to walk that idea back since then. It's not clear whether further sweeping regulations of the industry are still in store. —Merrit Kennedy, news desk reporter

A foundation for President Trump's plan to end HIV

In his state of the union address in February, President Trump announced a plan to end the HIV epidemic in America by 2030. This year, not a whole lot has happened toward this goal because there hasn't been funding from Congress — until now. The president's budget had called for $291 million, and Congress will overshoot that slightly.

This past fall, the Department of Health and Human Services gave grants to 32 state and local health departments where there are HIV "hotspots" so that they could develop or update programs to reach the goal of ending the epidemic. With this federal funding coming through, the hope is that those places will be able to hit the ground running.

"This is just the foundation — it's the first year of funding," says Carl Schmid of the AIDS Institute and the President's Advisory Council on HIV/AIDS. "It's an excellent start, but to achieve the goal of ending the epidemic, we'll need a lot more money to scale it up for next year and the years to come." —Selena Simmons-Duffin, health policy reporter

A bill intended to promote generic drug competition is also expected to get a ride in the budget. The Creating and Restoring Equal Access To Equivalent Samples Act — called the the CREATES Act, for short — aims to make sure branded manufacturers sell samples of their products to companies that want to use them to develop generic versions.

Brand-name companies have, at times, refused to sell samples to would-be generic competitors, citing a Food and Drug Administration program designed to keep potentially harmful drugs from being misused. The FDA says some brands have exploited this program to stall development of generics, maintain their monopolies and keep prices and profits high. With the passage of the CREATES Act, generic companies can sue if they think they've been wrongfully denied samples.

How A Drugmaker Gamed The System To Keep Generic Competition Away

"It's not a panacea, but it's definitely an important step forward in providing relief for Americans struggling with high prescription drug costs," says Harvard Medical School instructor Ameet Sarpatwari. The bill has been introduced five times but never managed to pass despite bipartisan sponsorship. The Congressional Budget Office expects CREATES to save taxpayers $3.7 billion over 10 years. —Sydney Lupkin, pharmaceuticals correspondent

The budget provides $25 million for research on preventing deaths and injuries from guns, split equally between the National Institutes of Health and the Centers for Disease Control and Prevention.

"This is a very meaningful, small step in the right direction," says Christian Heyne, vice president of policy at Brady, an organization focused on ending gun violence. He notes that these are the nation's two preeminent public health agencies. The CDC has shied away from gun violence research since 1996, when legislation known as the Dickey Amendment first prohibited the agency from using federal funds to advocate or promote gun control. In 2018, language added to instructions accompanying a spending bill made it clear that the CDC was allowed to conduct research on the causes of gun violence. At that time, Congress provided no funding.

Now, lawmakers have not only allocated money, "they're actually naming that this money needs to be spent to research gun violence," says Heyne. —Nell Greenfieldboyce, correspondent

The budget provides SAMHSA with $19 million for the Suicide Prevention Lifeline — this includes an increase of $7 million over last year. The additional funding is a "significant improvement," notes Lauren McGrath, the vice president of public policy at Centerstone, a behavioral health care provider working in several states.

Calls to the Lifeline are answered by a patchwork of about 165 local call centers that receive only about $1,500 to 2,000 per year of federal money. Most of the federal funds support the Lifeline's national infrastructure. The additional funding "will provide much needed resources to improve consumer access to the National Suicide Lifeline," McGrath wrote in an email. The funds will likely be used to identify areas where there are gaps in coverage and to find ways to fill in those gaps, she adds.

Still, she notes that the service is far from fully funded and centers struggle to keep pace with the rise in call volumes. As call volumes have increased, so have wait times and dropped calls. "We have a lot more work to do here," she adds.

This budget doesn't address funding needs for transitioning to the new 988 number that's in the works. That might come in the next fiscal year, notes McGrath. —Rhitu Chatterjee, health correspondent

Medicaid in the territories, community health clinics, and other "extenders"

The U.S. territories had been facing a dramatic funding cliff this fall. The ACA gave the territories 10 years of additional money for Medicaid, but that ran out in September — causing a potential $1 billion shortfall in 2020. Guam and the Virgin Islands warned they would need to start cutting their Medicaid rolls, and Puerto Rico would have had to cut benefits to account for the funding cliff.

Now, they won't have to — the spending package restores funding to the territories' Medicaid for two years. In fact, as Politico first reported, the White House agreed to four years of funding, but Trump objected, a source familiar with the negotiations confirmed to NPR.

Also attached to the budget are several other health "extenders," including funding for community health centers and safety net hospitals. However, those only get funding until May, notes Edwin Park, a research professor and the Georgetown Center for Children and Families.

Park thinks the new May deadline might be designed to help push forward legislation on other health priorities like prescription drug prices or surprise billing.

"I hope that Congress will come back in the spring of 2020 and will provide a longer-term extension, as opposed to again kicking the can down the road and placing these provisions in limbo," Park says. —Selena Simmons-Duffin, health policy reporter