Accessibility links
Why Nativity Scene Shepherds Sometimes Have Goiter : Shots - Health News In some historical Nativity scenes, the shepherds have grossly enlarged thyroid glands — also known today as goiter. It's an apparent symbol of their poverty and iodine-deficient diet. 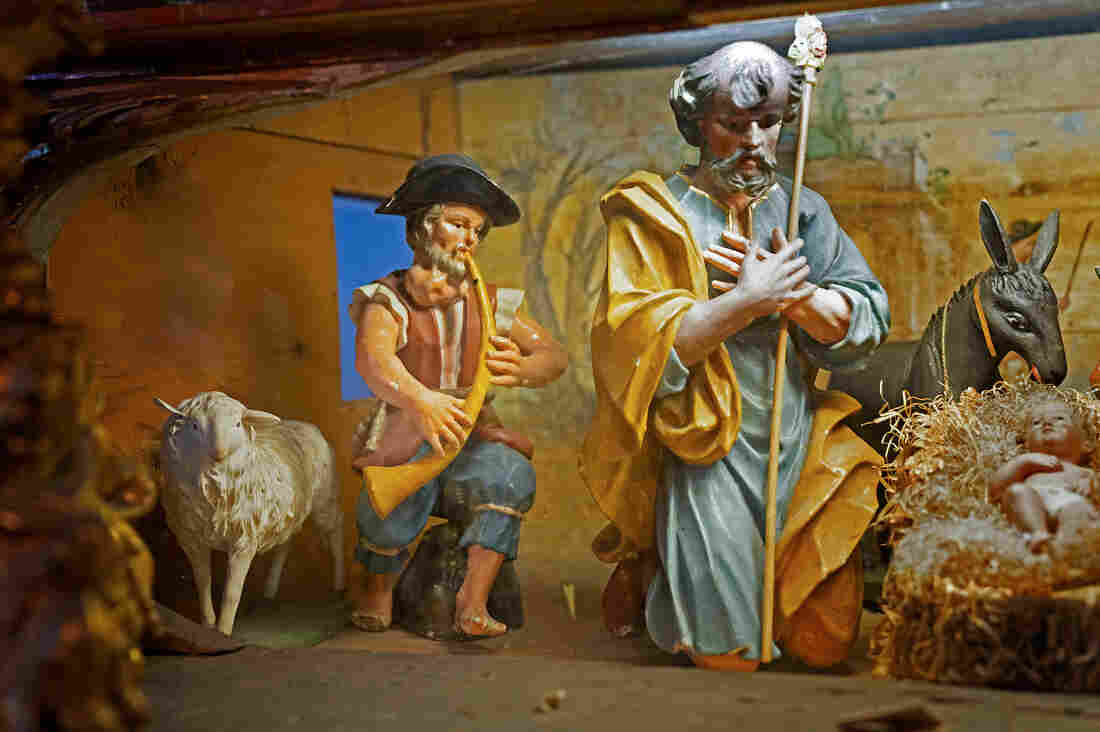 A horn player (left) in this detail from a 1694 altar carving by Francesco Antonio d'Alberto in Piedmont, Italy, clearly has a swollen neck that signifies goiter, medical historians say. The thyroid condition was a sign of poverty in those days. Renzo Dionigi hide caption 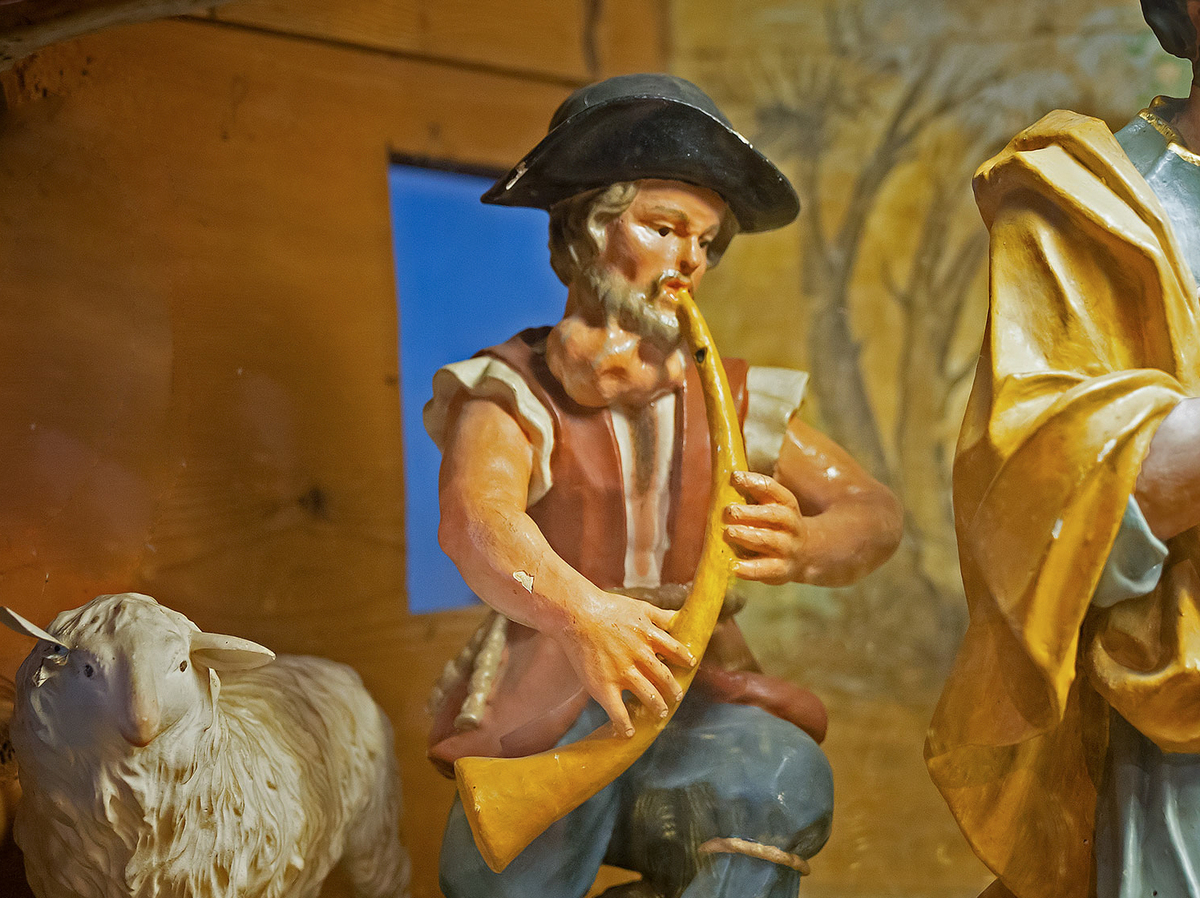 A horn player (left) in this detail from a 1694 altar carving by Francesco Antonio d'Alberto in Piedmont, Italy, clearly has a swollen neck that signifies goiter, medical historians say. The thyroid condition was a sign of poverty in those days.

Shepherds in Christmas Nativity scenes that were painted, carved or sculpted hundreds of years ago sometimes have throats with large, abnormal growths.

These are realistic depictions of goiter, an enlargement of the thyroid gland caused by iodine deficiency. The condition was common in those days in northern Italy, where the soil and water are depleted of iodine.

"Goiter is more often seen in poor people," says retired surgeon Renzo Dionigi of the University of Insubria in Varese, Italy, who notes that the working classes in this region would historically not have a varied diet that might supply this vital nutrient.

"That's why, probably, the poor shepherds are depicted with goiters," he says.

He and his son, an endocrine surgeon named Gianlorenzo Dionigi, have for years enjoyed studying art and looking for signs of medical conditions. In the Sacri Monti ("Sacred Mountains") of Piedmont and Lombardy, they have visited chapels and churches created in the 16th and 17th centuries.

"In all the Sacri Monti that I and my son visited, we have been able to observe representations of goiters very, very often," says the elder Dionigi.

In one Nativity tableau from 1694, for example, a young horn player with a large goiter plays for the Holy Family. And in one fresco over the main door of the Aosta Cathedral, a shepherd with goiter plays his bagpipe for the newborn Jesus. 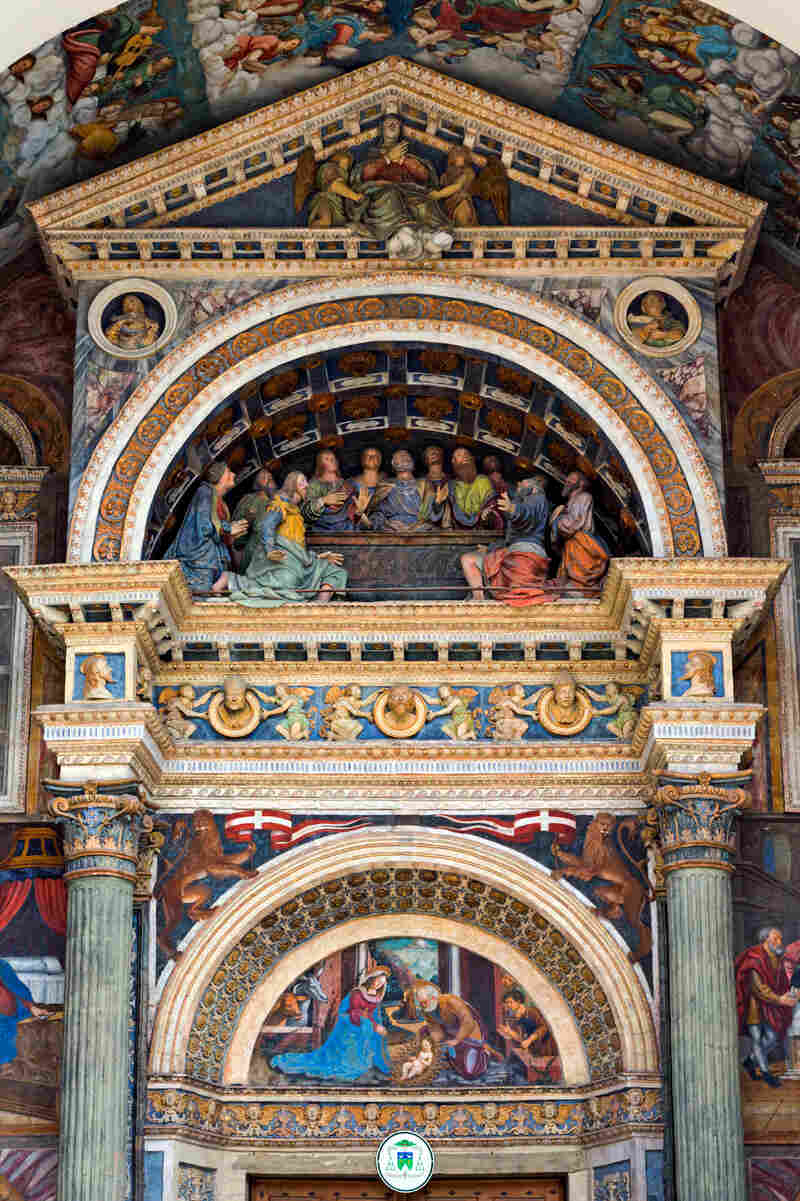 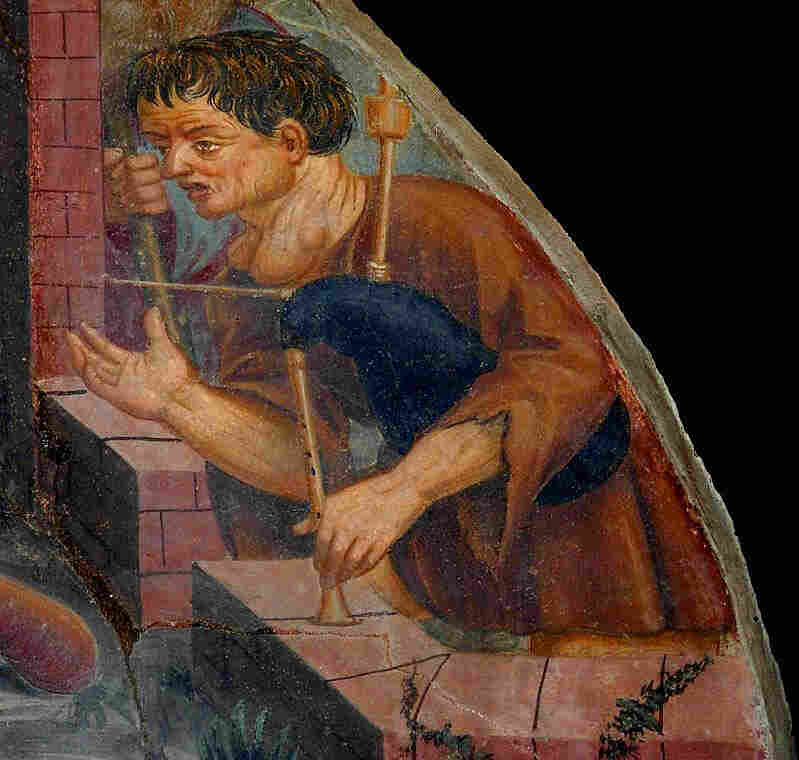 Found it! The shepherd who gladdens the Holy Family with his bagpipe in the 16th-century Nativity fresco over the main door of the Aosta Cathedral has the swollen throat typical of a greatly enlarged thyroid gland. Renzo Dionigi hide caption

Dionigi and his son also recently reported on two wooden shepherds, both with enormous goiters, that were once part of a 16th-century Nativity scene.

This father and son are not the only surgeons interested in spotting goiter in artwork. Another recent report noted a large, obvious goiter on one of the shepherds visiting the baby Jesus in the 16th-century Adoration of Shepherds by Renaissance painter Alessandro Bonvicino.

Beyond Nativity scenes (where goiter isn't actually all that common, according to Dionigi), some historians of art and medicine seem to see almost any thick neck as evidence of goiter.

"The representation of thyroid swelling in art is a debated issue and has found considerable attention in the medical literature," one review article noted in 2018.

Dionigi thinks a putative goiter should count only if the artwork clearly and unambiguously shows the disease state.

"The real goiter is when the painter or the sculptor wants to depict the person with the goiter," he says.

Massive goiters sometimes show up on artists' portrayals of tormentors and executioners, apparently as a symbol of evil. But often, goiter just indicates that a person is poor or needy.

In one 17th-century terra-cotta sculpture from northern Italy, a person with an enormous goiter begs St. Francis for healing. "That's the hugest goiter I have ever seen in any sculpture," says Dionigi. "The size of that goiter in that sculpture is something like half a meter."

Dionigi's favorite artistic goiter appears on a woman portrayed in The Crucifixion of St. Andrew, by Caravaggio, at the Cleveland Museum of Art.

Not too long ago, goiters were a common sight in the United States. Before iodized salt became available in the 1920s, the U.S. had a "goiter belt" around the Great Lakes and the Northwest region of the country.

And iodine deficiency isn't just a medical condition of the past. 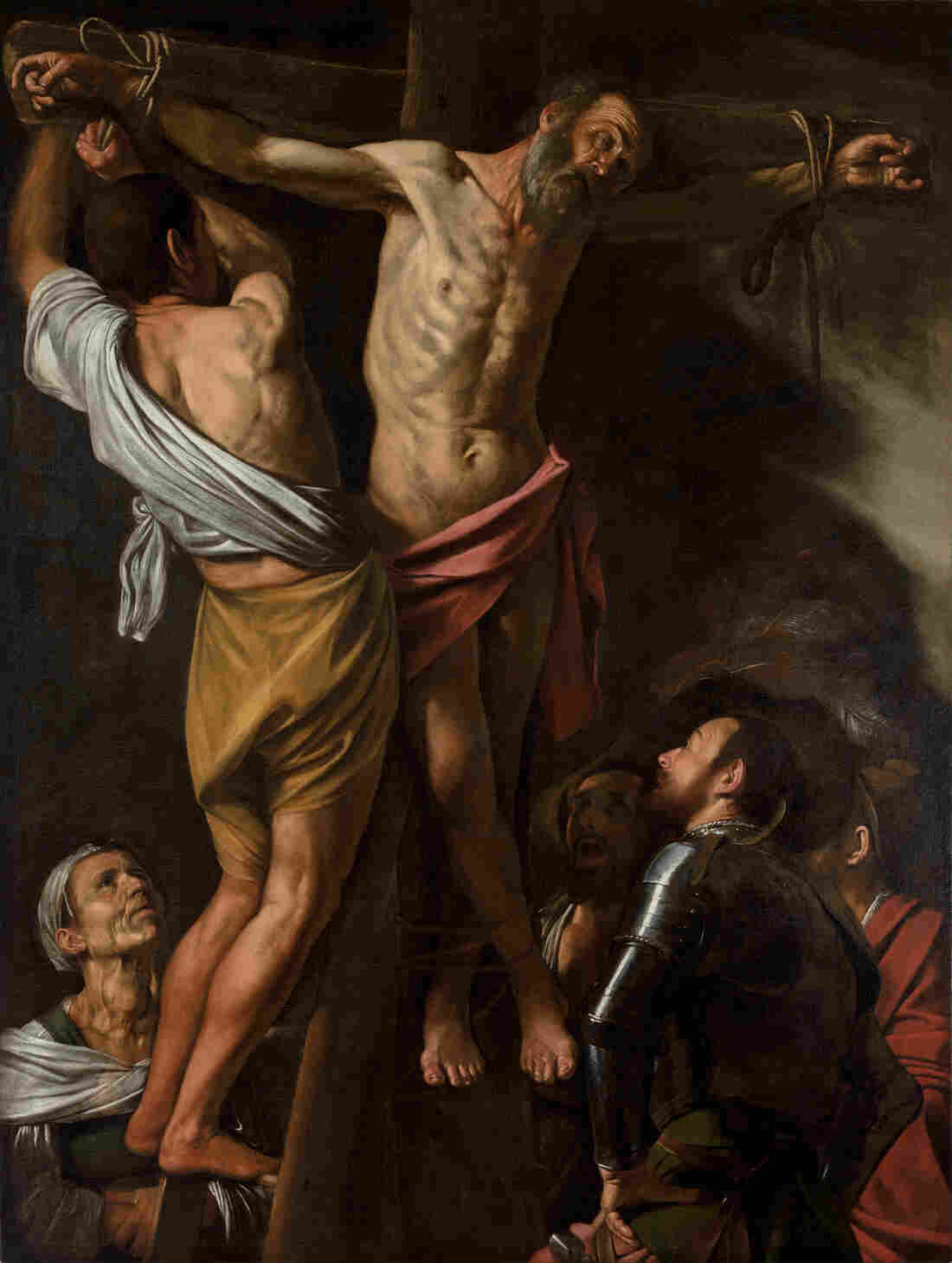 Caravaggio's painting The Crucifixion of St. Andrew portrays an enlarged thyroid in one of the bystanders. Caravaggio/Cleveland Museum of Art hide caption 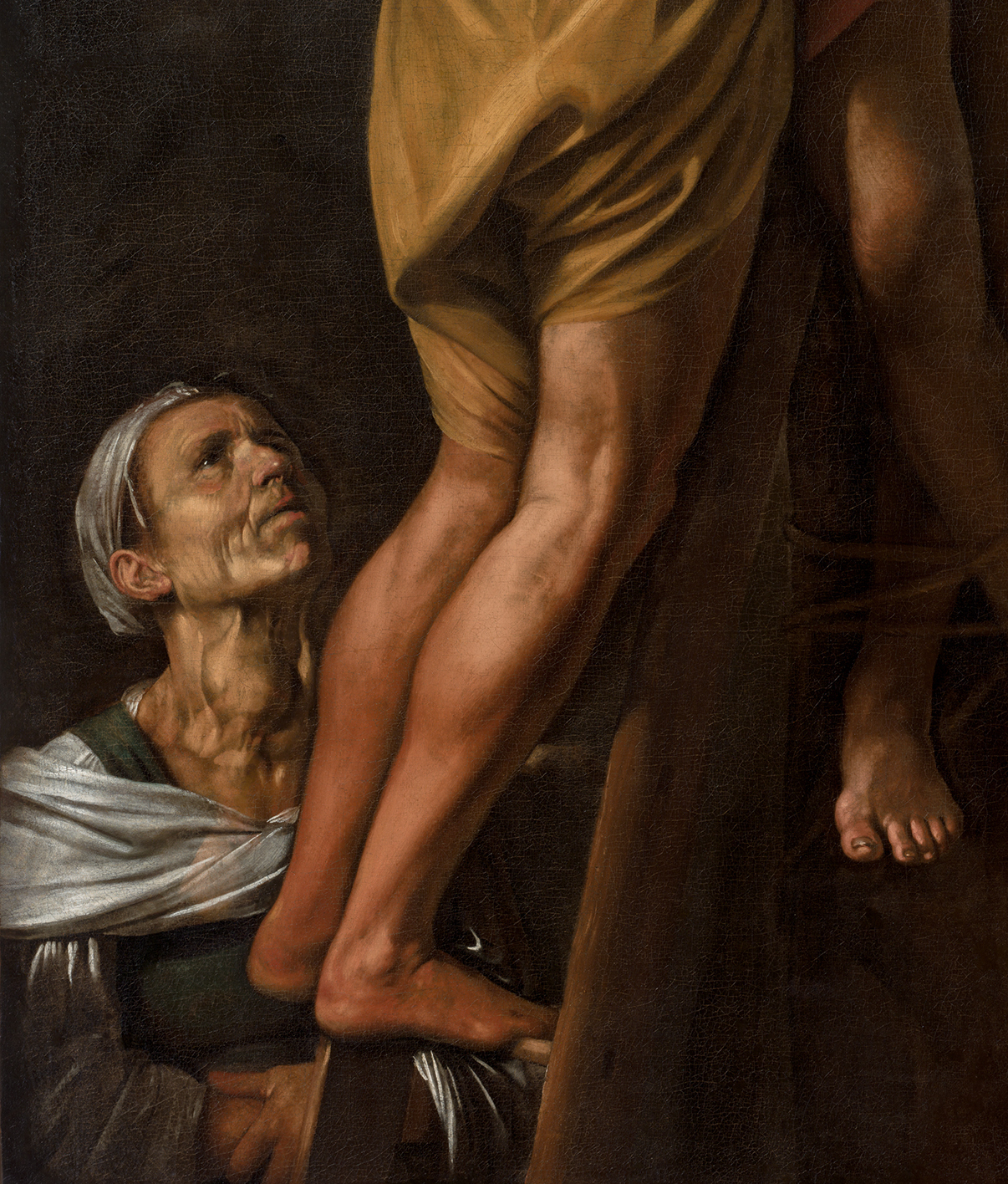 Caravaggio's painting The Crucifixion of St. Andrew portrays an enlarged thyroid in one of the bystanders.

About a third of the world's population currently lacks adequate iodine, says Angela Leung, an endocrinologist at UCLA and the VA Greater Los Angeles Healthcare System.

"That just ranges from very mild forms of iodine deficiency to more moderate subtypes," she says, noting that the body needs iodine to make thyroid hormone. Goiter seems to occur when the thyroid tries to bulk up to create more of it.

Goiter is one manifestation of not having enough thyroid hormone, she says, but other symptoms include fatigue, weight gain, sluggishness and dry skin.

In addition, thyroid hormone is needed for fetal brain development. The World Health Organization says that iodine deficiency is "the world's most prevalent, yet easily preventable, cause of brain damage."

The most common and effective public health measure to counter iodine insufficiency is to iodize salt. "Not all countries have chosen to universally iodize their salt," says Leung.

In the U.S., about 70% of household salt available in grocery stores is iodized. Nonetheless, certain groups might be vulnerable to iodine deficiency, such as pregnant women or people on restricted diets, like vegans, says Leung.

It is possible to overdo iodine consumption and end up with too much thyroid hormone.

"Getting the right balance is what we are striving for," says Leung, "but we're certainly not there yet on a global scale."

Overdoing iodine was clearly not a danger for the folks who lived in Italy during the Renaissance — at least not for those influencing the religious artists who wanted to depict shepherds.