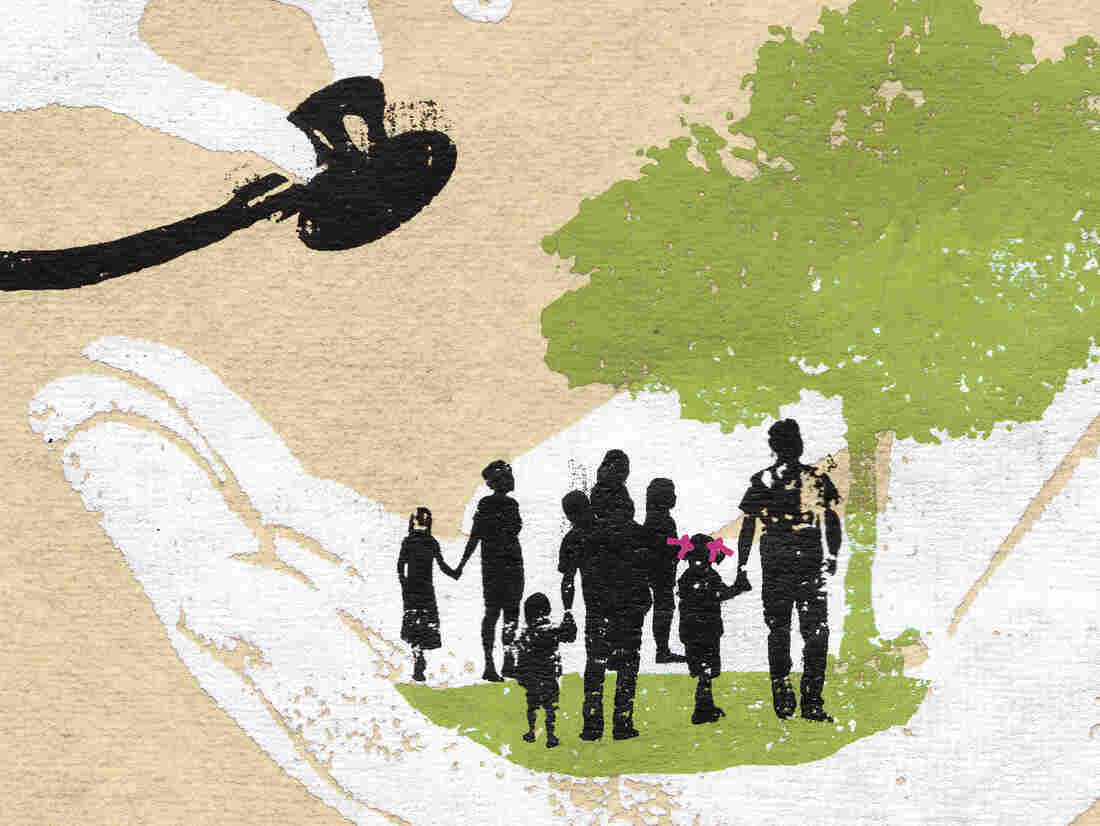 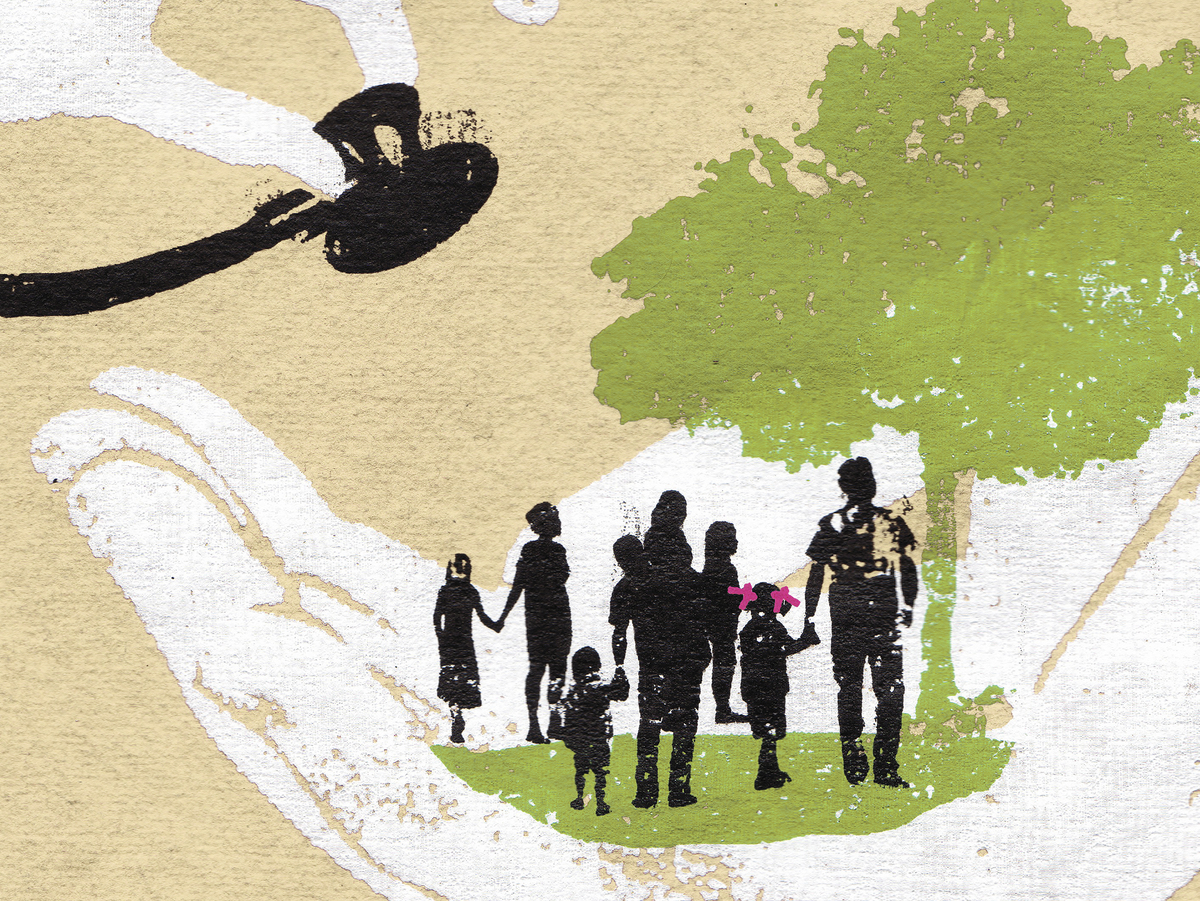 Improving health and lowering costs for the sickest and most expensive patients in America is a dream harder to realize than many health care leaders had hoped, according to a study published Wednesday in the New England Journal of Medicine.

Researchers tested whether pairing frequently hospitalized patients in Camden, N.J., with nurses and social workers could stop that costly cycle of readmissions. The study found no effect: Patients receiving extra support were just as likely to return to the hospital within 180 days as those not receiving that help.

The results are a blow to Dr. Jeffrey Brenner and the Camden Coalition of Healthcare Providers, the organization he founded nearly 20 years ago.

"It's my life's work. So, of course, you're upset and sad," says Brenner, who now does similar work with health insurance giant UnitedHealthcare.

The model of care, pioneered in part by Brenner and profiled in a widely read 2011 article in The New Yorker, has inspired dozens of similar projects across the country and attracted millions in philanthropic funding.

"This is the messy thing about science," says Brenner, who won a MacArthur Foundation "Genius Grant" for his efforts. "Sometimes things work the way you want them to work and sometimes they don't."

Many hospital and insurance executives have pinned their hopes on this research because it promised to solve a common problem: when patients' lives are so complicated by social factors like poverty and addiction that their manageable medical conditions, like diabetes and asthma, lead to expensive, recurring hospital stays.

Writer and physician Atul Gawande introduced Brenner as a brash visionary crusading on behalf of the "worst-of-the-worst patients" in the New Yorker piece, titled "The Hot Spotters." (Gawande, who now heads Haven, a joint venture of Amazon, Berkshire Hathaway and JPMorgan Chase, declined to be interviewed for this article.)

Brenner's prescription: Pair these patients with front-line care workers who would shepherd them to the social and medical services they needed. Early evidence was promising, the anecdotes inspiring. Brenner boiled the model's potential down to four words and two tantalizing goals: better care, lower costs.

As word spread, breathless headlines popped up like "Health Care's Best Hope," and "Could Camden Coalition Save U.S. Health Care?"

Instead, Brenner took the unusual step of inviting the scrutiny of respected researchers.

In 2014, Massachusetts Institute of Technology economist Amy Finkelstein began a randomized controlled trial, the same rigorous method used to evaluate new drugs. Over four years, the Coalition enrolled 800 patients; all had been recently hospitalized and all struggled with social problems. Half received the usual care patients get when leaving the hospital. The other half got about 90 days of intensive social and medical assistance from the coalition.

And the result: The 400 patients who received the intensive help were just as likely to return to the hospital as the patients who didn't. In both groups, nearly two-thirds of people were readmitted within 180 days.

So why did the Coalition fail, at least in its initial cost-saving goal? Why did the savings touted in their early data, which Gawande had declared "revolutionary" in The New Yorker nearly a decade ago, disappear when put to this rigorous test?

The experience of Larry Moore, one of the patients in the MIT study, reveals a road map as to why the Coalition missed its mark.

Moore, who has hypertension, alcohol addiction, chronic seizures and difficulty walking, was one of the first people to enroll in the Coalition's trial.

His first months were promising: prescriptions filled, medical appointments attended, Social Security benefits claim in process. The 47-year-old even started to trust the team with the details of his deep-seated addiction — confiding about how he sometimes would consume mouthwash, vanilla extract and even hand sanitizer.

He "couldn't keep anything with alcohol in it" around, Moore says of his dependency in those days. "That's addiction."

But all the progress he'd started to make with the social workers suddenly stopped when Moore disappeared from the Coalition's radar.

"We didn't see Mr. Moore after November," says nurse Jeneen Skinner. "We went to the house. We sent text messages. We [made] phone calls."

The Coalition has since learned that, for people living in poverty and with poor health, a single hiccup — in Moore's case, a missed rent payment — can spiral into a major setback.

Missing that rent payment led to Moore's spending the next 2½ years mostly homeless, completely out of touch with the Coalition.

"I was going from place to place. I [would] sleep on a bench or a rock until the next day when the liquor store [opened]," Moore remembers. "That was my daily routine."

He told her the one thing that would keep him out of the hospital: housing.

Too many times, during the research study, people ended up back in the hospital despite the intervention. But the Coalition is convinced it didn't fail as much as the larger social safety net did. 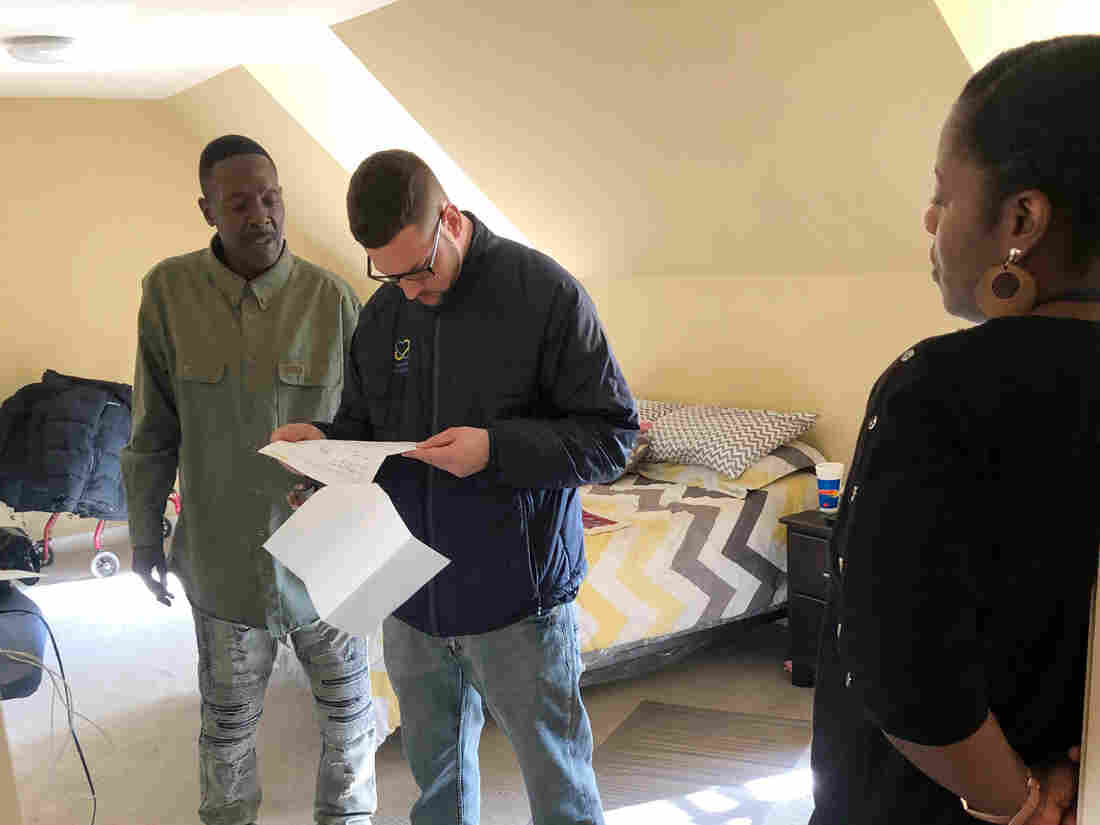 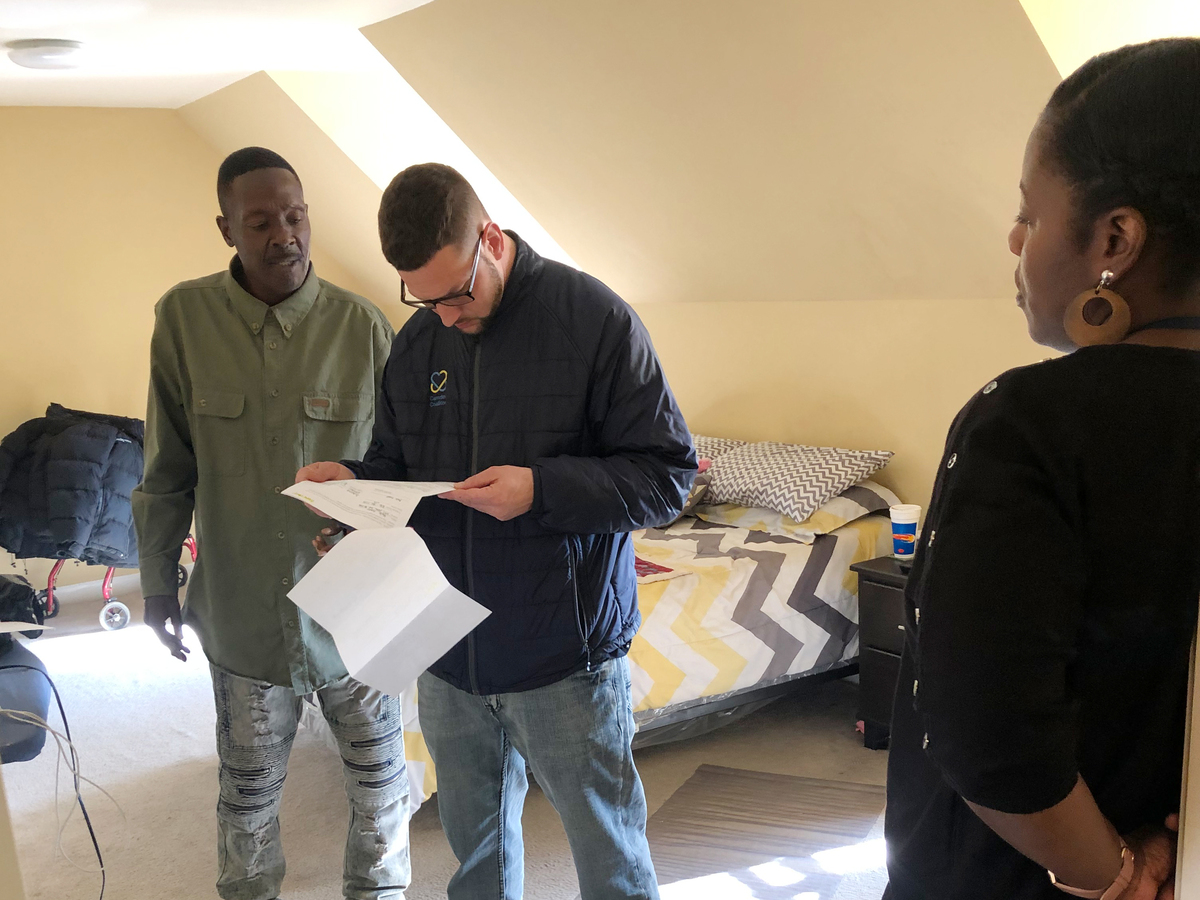 "The bottom line is, we built a brilliant intervention to navigate people to nowhere," says Brenner.

Over the past three years, the Coalition has set out to fill in those gaps — and, along the way, undergone a kind of metamorphosis.

"We think of ourselves now as the Camden Coalition" — steering away from the "health care providers" part of the name, says Kathleen Noonan, who succeeded Brenner as head of the organization.

The Coalition has forged partnerships with jails, lawyers and legislators, and started its own housing program. Many of these efforts began toward the end of the clinical trial — a sign the Coalition was seeing the handwriting on the wall.

"I would have never imagined this," says Moore, sweeping his arm around the one-bedroom apartment he lives in today.

A green houseplant sits in the sunshine. A stuffed animal decorates the bed.

"When I first moved in here," Moore explains, "it took me about a month to even sleep in my bed. I slept on a couch."

Housing also made it easier to face his other problem — drinking. Moore chose to try the drug naltrexone, a long-acting injection to treat alcohol addiction. 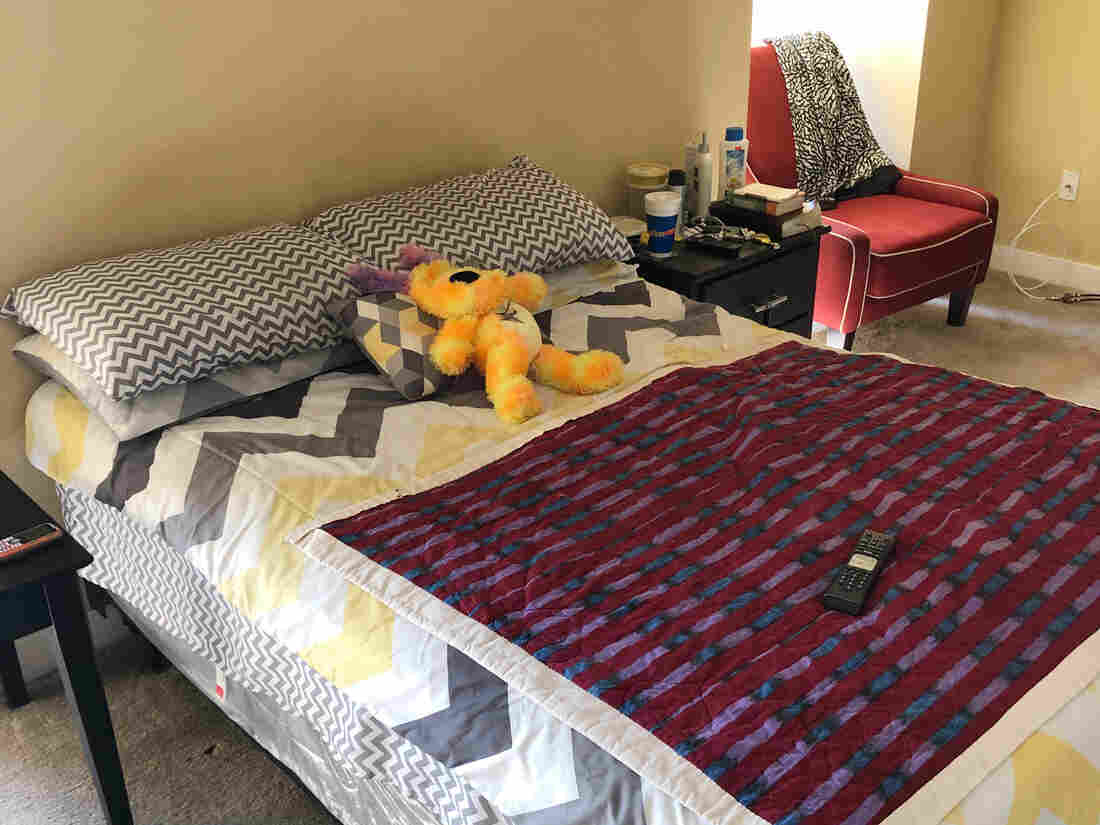 After years of intermittent homelessness, Moore says, it was month after moving into his apartment before he was able to fall asleep in a bed. Dan Gorenstein/Tradeoffs hide caption 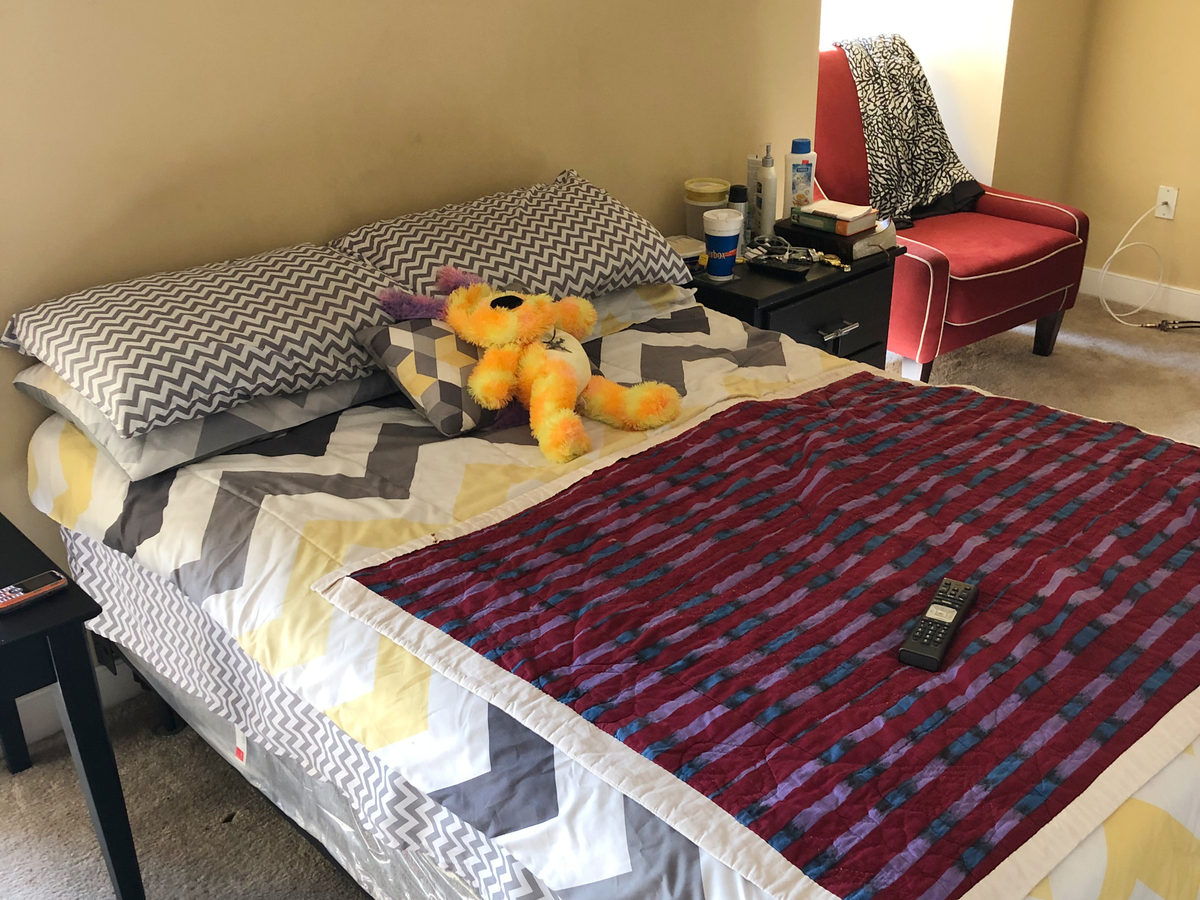 After years of intermittent homelessness, Moore says, it was month after moving into his apartment before he was able to fall asleep in a bed.

Today, Moore is nearly two years sober. He meets with a Coalition support group on Wednesdays, and is in training to become a deacon at his church. In the 22 months he has lived in an apartment, Moore's trips to the hospital have plummeted: just one admission and one ER visit.

"I kid you not, when I saw Mr. Moore probably a month ago, I was standing next to him and did not recognize him," says nurse Skinner. "He looked at me, and said, 'Jeneen, it's me. And I was like, 'My God, you look amazing!' "

Larry Moore's story is just that — one story. Yet it represents a larger trend. Insurers — including UnitedHealthcare under Brenner's direction — hospitals and many state Medicaid agencies have begun spending millions to meet patients' social needs.

Still, the study published Wednesday backs up the skepticism of other researchers that, when it comes to saving money at least, these approaches don't work well. For one, programs are expensive and hard to scale. The Coalition's housing effort currently serves only 50 people and costs about $14,000 per person per year.

It's an expensive proposition that may not pencil out. "Despite what people would like to believe, there's not a lot of evidence you can reduce health spending by spending more in other areas," cautions Boston University economist Austin Frakt.

Finkelstein says that as health care companies move further beyond the four walls of a hospital, the need for rigorous evaluation grows. "I think a lot of well-intentioned people in health care can't handle the truth," she says. "They're trying to do good, but they don't have the courage to say, 'Let's do a gut check on ourselves.'"

Eighteen years ago, Brenner hypothesized the Coalition — with some savvy navigation and hard-earned trust — could guide the most complicated patients towards better health and cut spending. Finkelstein's randomized controlled trial shows that idea fell short.

Coalition CEO Kathleen Noonan, considers it progress, even if it's not the progress so many had wanted. "People like stories about success and they like stories about failure. They just love extremes. I'm really hoping that this is a story about complexity — and about courage."

Dan Gorenstein is the creator and co-host of Tradeoffs podcast and Leslie Walker is a producer on the show, which features the study on the Camden Coalition in episode 7. Kaiser Health News is an editorially independent program of the Henry J. Kaiser Family Foundation.