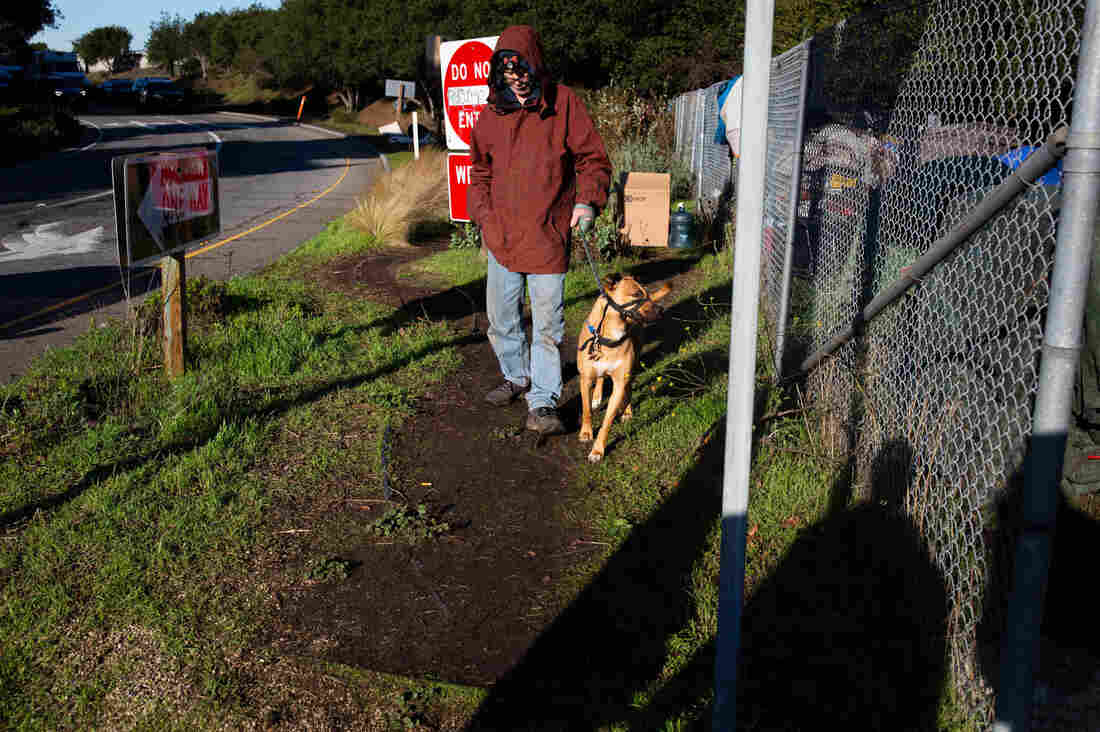 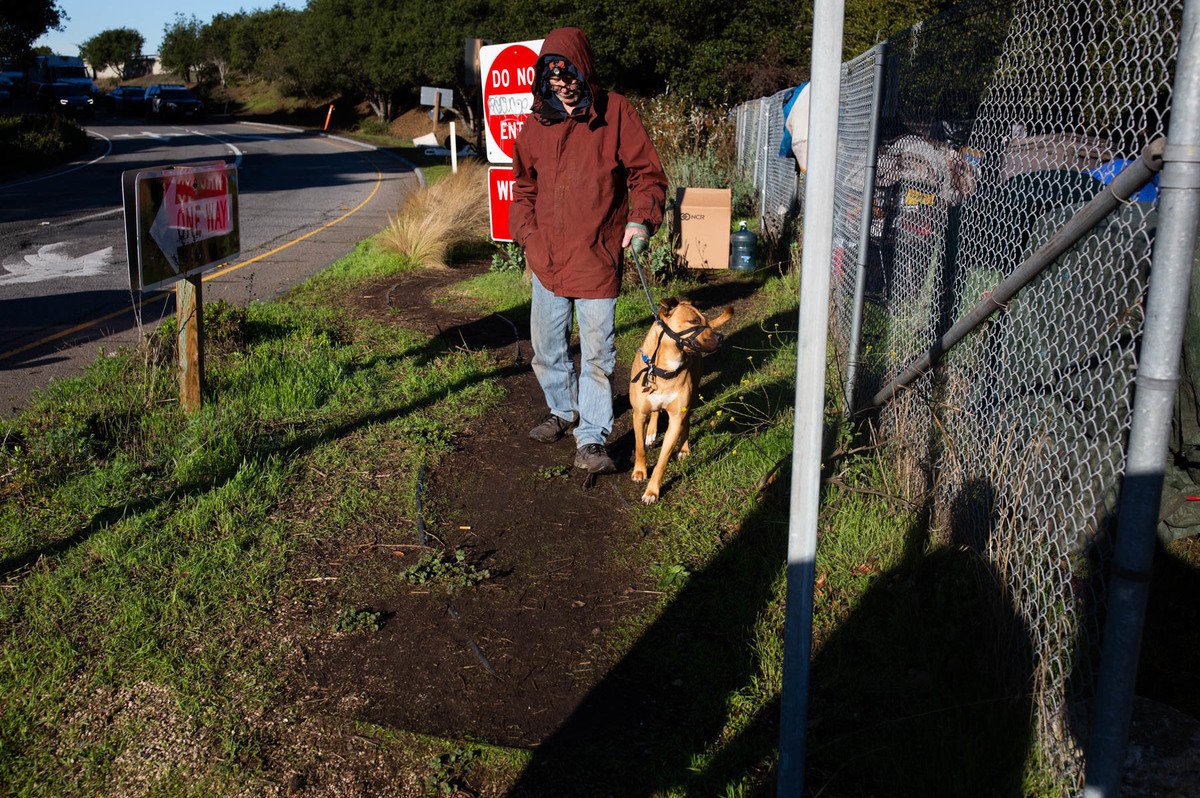 Norm Ciha says he lost his bedding, clothes and the medicine he'd been prescribed to treat hepatitis C during a sweep of his camp outside an Ikea in Emeryville, Calif., in November 2018.

It's 5 a.m., and the thermostat reads 44 degrees. Cars round the bend of an off-ramp of state Route 24 in northern Oakland, Calif., spraying bands of light across Norm Ciha and his neighbors. They wear headlamps so they can see in the dark as they gather their belongings: tents, clothes, cooking gear, carts piled with blankets, children's shoes and, in one case, a set of golf clubs.

Shredder, Ciha's dog, takes a treat, then lets it fall from his mouth. He whines as Ciha walks away with a camping mattress. "I can leave him all day in the tent and he's fine, but he freaks out every time we have to move," Ciha says.

Every other week, the residents of this thin slice of state-owned land just off the freeway pack up their possessions and move to another empty lot nearby; they aren't quite sure who owns it. They move in anticipation of the routine sweeps of homeless encampments ordered by the California Department of Transportation, which has jurisdiction over the state's highways and exit ramps.

The highway crews check that the area is clear of people and their belongings, throwing away any items that remain. Once the trucks leave, the residents move back in. Ciha and his neighbors call it "the Caltrans Shuffle."

Their makeshift neighborhood of tarps and tents is built on one of thousands of public spaces across California where people have set up camp. The state's homeless population has ballooned in recent years; in 2019, there were more than 150,000 homeless people in California, according to the U.S. Department of Housing and Urban Development, and 72% of them did not have shelter.

A range of health concerns has spread among homeless communities. A few years ago, hepatitis A, spread primarily through feces, infected more than 700 people in California, most of them homeless, according to state officials. Ancient diseases, such as typhus, have resurged. Homeless people are dying in record numbers on the streets of Los Angeles, according to data from the county coroner.

Communities up and down California, increasingly frustrated with the growing number of homeless people living on public property, have tasked police and sanitation workers with dismantling encampments that they say pollute public areas and pose serious risk of fire, violence and disease. The rousting and cleanups have become a daily occurrence around the state, involving an array of state and local agencies.

But the response from officials has prompted a public health crisis all its own, according to interviews with dozens of homeless people and their advocates. Personal possessions, including medicines and necessary medical devices, are routinely thrown away. It's a quotidian event that Leilani Farha, the United Nations special rapporteur on adequate housing, described as a "cruelty" that she hasn't seen in other impoverished corners of the world.

Ciha, who is 57, learned the hard way that living on the street means his belongings can be taken in an instant.

In November 2018, when he was camping by an Ikea in nearby Emeryville, the California Highway Patrol and Caltrans employees showed up unannounced. He was out buying a tent when they arrived, and the crew designated his belongings as garbage. His fellow campers protested and grabbed what they could. Ciha returned and asked for time to gather his things. But everything, he says, was just thrown into a trash compactor.

Along with his bedding and clothes, he lost three weeks of an eight-week supply of the medication he'd been prescribed to treat hepatitis C. He'd gotten the medicine through Medi-Cal, California's Medicaid program. Though the drugs were almost certainly purchased at a discount, Ciha's course of treatment retails for around $40,000.

In 2018, a federal court case involving a camping ban in Boise, Idaho, determined that cities can't cite people for sleeping on public property when there's nowhere else to go. It doesn't, however, determine rules about their possessions. That question has been argued for decades, with multiple courts determining that destroying or confiscating property without notice is a violation of the constitutional right to personal property. Cities rarely, if ever, fight those decisions, which means there's been no precedent set by a higher court. 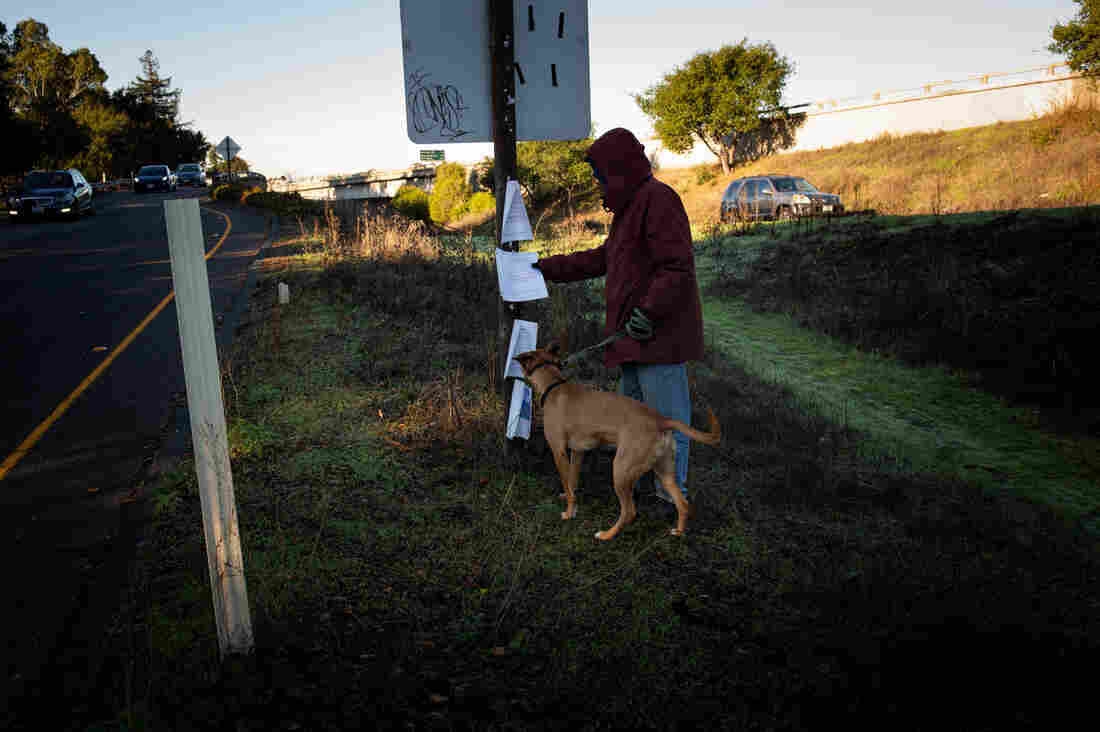 The California Department of Transportation is required to post notices of cleanups before clearing out homeless encampments on state property. But housing advocates, who say the agency doesn't always comply with the rules, are suing the state over seized belongings. Anna Maria Barry-Jester/Kaiser Health News hide caption 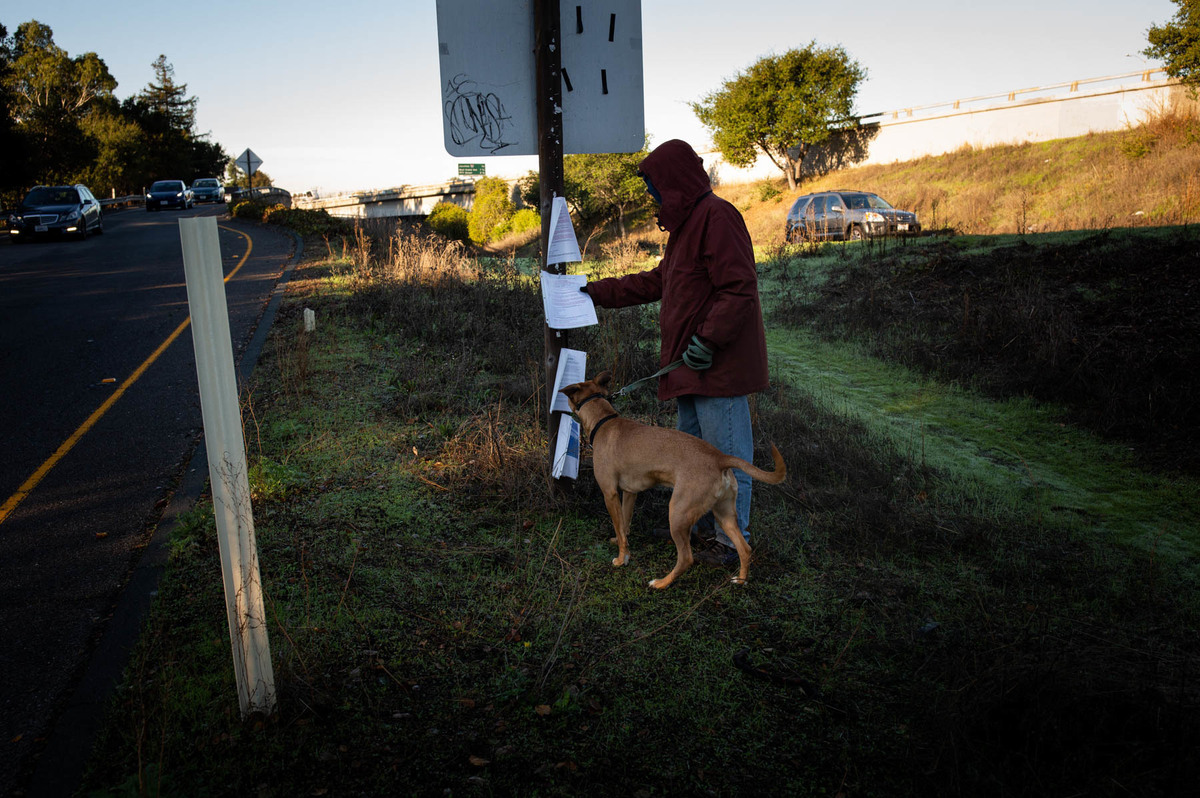 The California Department of Transportation is required to post notices of cleanups before clearing out homeless encampments on state property. But housing advocates, who say the agency doesn't always comply with the rules, are suing the state over seized belongings. 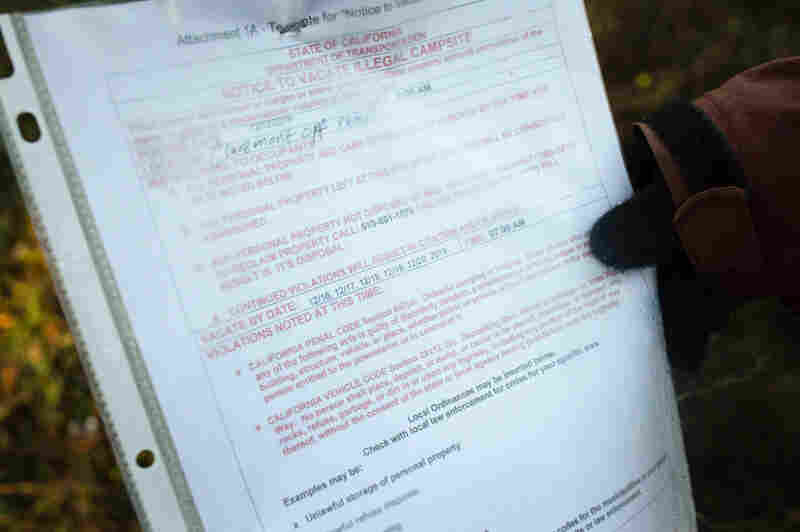 Lawsuits in California have made the issue more visible in the state than in other places, even though this is a nationwide problem, says Eric Tars, legal director of the National Law Center on Homelessness and Poverty. Today, many California cities have policies that either prevent seizing belongings or require storage, but public health and safety exceptions often allow for things to be thrown away without notice.

"If cities spent half the energy on trying to provide access to sanitation as they did on trying to find constitutional ways to take people's belongings, they could address homelessness," Tars says.

The city of San Francisco contends that it stores people's belongings when they are seized — a policy that resulted from a settlement of an earlier lawsuit. But advocates for the homeless, including Chris Herring, a doctoral student in sociology at University of California, Berkeley, say that doesn't always happen.

Herring has been embedding himself in San Francisco's homeless community off and on for years. He spent nine months in 2014 and 2015 living on the street, for example, and another year studying the police, public health and sanitation workers tasked with cleaning encampments.

Herring says he has witnessed people refusing medical help because they didn't want to leave their things behind, and says he knows others who lost jobs after missing shifts to salvage personal items. An elderly man, so ill he lay paralyzed on the sidewalk, once called Herring and asked him to look after his stuff before he called 911.

Los Angeles has limited the amount of personal property people can carry with them or store on public property, saying it must fit inside a 60-gallon container — the equivalent of a medium-sized outdoor trash bin. Several homeless residents are suing the city over the rule.

In Oakland, up the hill from where Ciha camps, Caltrans posts advisories about scheduled cleanups, notifying people when they will come through. Caltrans policy requires the postings, but an ongoing class-action lawsuit against Caltrans claims that policy isn't always followed and that the sweeps are a violation of people's constitutional right to private property.

Ciha has joined the suit. Another defendant says Caltrans took her walker, which she was using because an infected wound made it difficult for her to get around. Others have lost ID cards and prescriptions, a setback for making appointments or receiving benefits, according to one of the lawyers on the case, Osha Neumann.

Caltrans workers say they hate doing the cleanups. "It's like 100 times worse than it was just a few years ago," says Steve Crouch, director of public employees for Local 39 of the International Union of Operating Engineers, which represents Caltrans workers. "One of the biggest gripes they have is having to clean up the homeless encampments. It's a nasty job."

The sweeps also cause psychological pain. Ciha and his neighbors talk about how horrible it is when people driving by throw garbage at them. Herring says the trauma of living on the streets is so intense he hasn't yet figured out how to write about it in his academic work. "[The city will] say we're just asking people to move, but if you're being asked that over and over and you have nowhere to go, and people are acting like you're worthless or they're scared of you, that affects you fast," Herring says.

Ciha got tested for hepatitis C after a friend went from healthy to sick in a matter of months. When Ciha was prescribed the treatment, the doctor told him he shouldn't miss a dose. After his things were discarded, he wandered around Oakland for a week, he says, sleeping in random places. 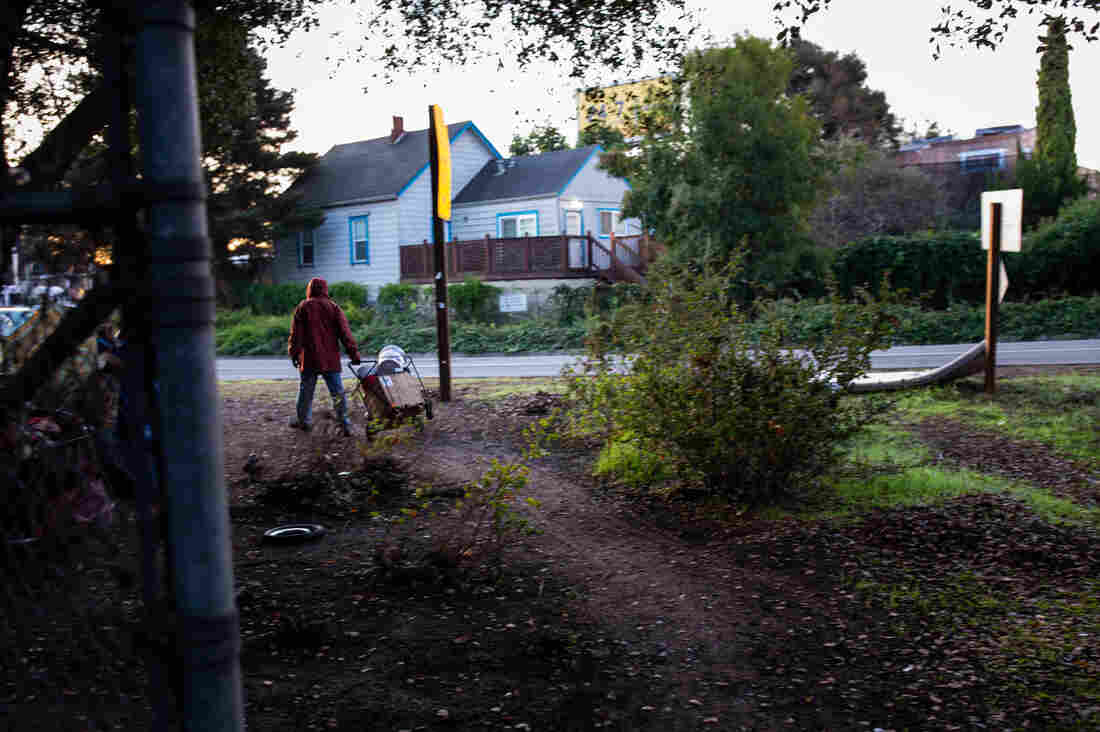 Every other week, Norm Ciha and his homeless neighbors temporarily relocate their camp from land alongside a freeway off-ramp in Oakland, Calif., to a nearby vacant lot — until state cleanup crews have come and gone. They call it "the Caltrans Shuffle." Anna Maria Barry-Jester/Kaiser Health News hide caption

He eventually stumbled across the encampment he now calls home; he likes it because it has only a few people and, for the most part, everyone keeps their area clean and drama-free.

Ciha went back to the doctor after he moved in and was able to get a refill of his prescription. But he'd gone a week without treatment and hasn't been back since, to see if his hepatitis C is cured.

He has since grown accustomed to the Caltrans Shuffle. In the hours before last month's sweep, he first lugged his cot to the nearby lot. Then his camping mattress and a plastic bin with pots, pans and utensils. Shredder's food bowl. A cart holding a suitcase filled with bright white teddy bears that remind him of his mom, a badminton racket, a comforter and a small landscape painting. Things he'll use, he says, when he gets a place. 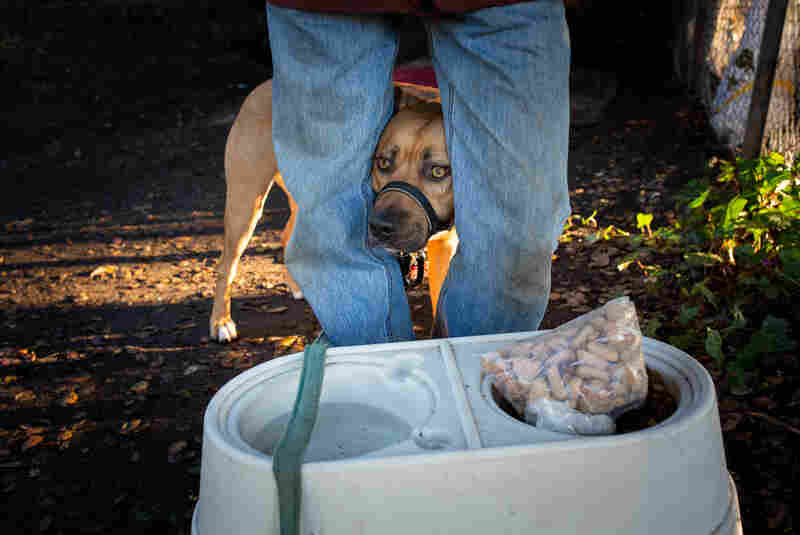 Ciha says his dog, Shredder, hates the recurring moves: "I can leave him all day in the tent and he's fine, but he freaks out every time we have to move." Anna Maria Barry-Jester/Kaiser Health News hide caption

He'd moved his belongings and was standing on the sidewalk by the time the Caltrans crew arrived, with two police escorts and five trucks. One of Ciha's neighbors threw garbage into the back of one of the trucks, while workers checked the property. As the cleanup crew packed up, Ciha stood in the lot next door eating a peanut butter and jelly sandwich. The sun was now above the horizon pushing out the morning cold. He would rest a few minutes, and then move back home.