Accessibility links
Kratom's Benefits And Dangers Debated Amid Marketing Push : Shots - Health News Some people struggling with opioid addiction who switched to kratom swear the herb salvaged their lives. But federal agencies and the brother of a man who died from his kratom use warn of its risks. 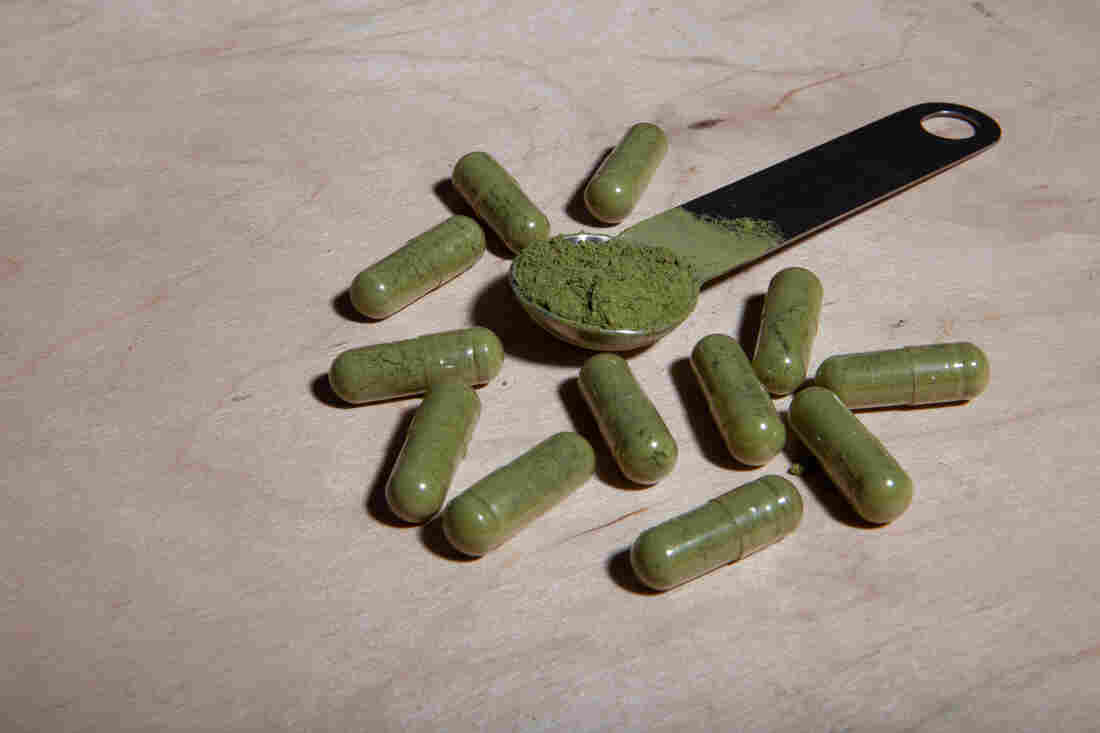 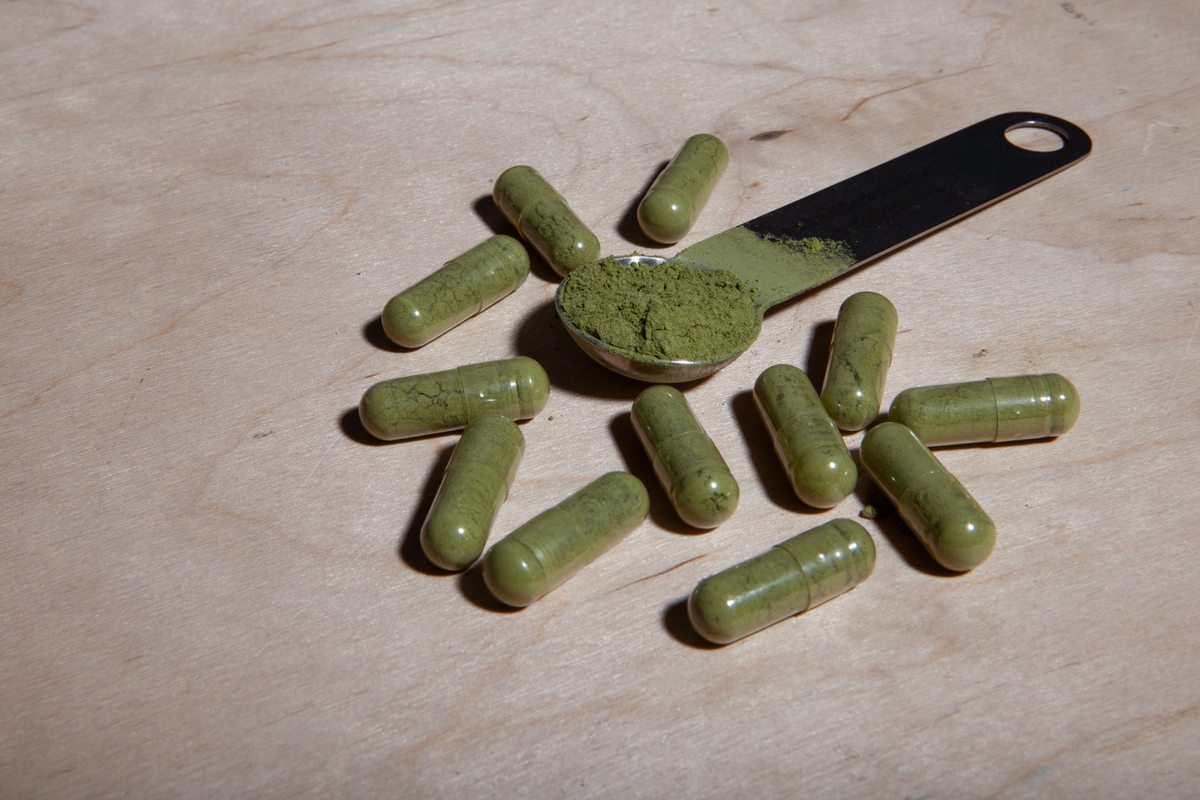 Kratom products are legal in most states and are widely available. But the federal Food and Drug Administration and the Drug Enforcement Administration worry that kratom carries the risk of physical and psychological dependency and, in some people, addiction.

Americans know the dangers of drugs such as morphine and heroin. But what about a supplement that acts in the brain a bit like an opiate and is available in many places to kids — even from vending machines.

Kratom, an herb that's abundant, legal in most states and potentially dangerous, is the subject of an ongoing debate over its risks and benefits.

Usually, the leaf, which comes from a tropical Southeast Asian tree, is chewed, brewed or crushed into a bitter green powder. The chemicals in the herb interact with different types of receptors in the brain — some that respond to opioids, and others to stimulants. Often sold in the U.S. in a processed form — as pills, capsules or extracts — a small amount of kratom can perk you up, while a large dose has a sedative effect.

Some people who have struggled with an opioid addiction and switched to kratom swear the substance salvaged their health, livelihood and relationships.

But the federal Food and Drug Administration and the Drug Enforcement Administration worry that kratom carries the risk of physical and psychological dependency and, in some people, addiction. The FDA warns consumers not to use kratom, and the DEA threatened to prohibit kratom's sale and use in the U.S. (outside of research) in 2016; advocates and lawmakers subsequently pushed back, and the stricter scheduling of kratom that would have prompted that sort of ban never occurred. These days, the DEA lists it as a drug of concern. 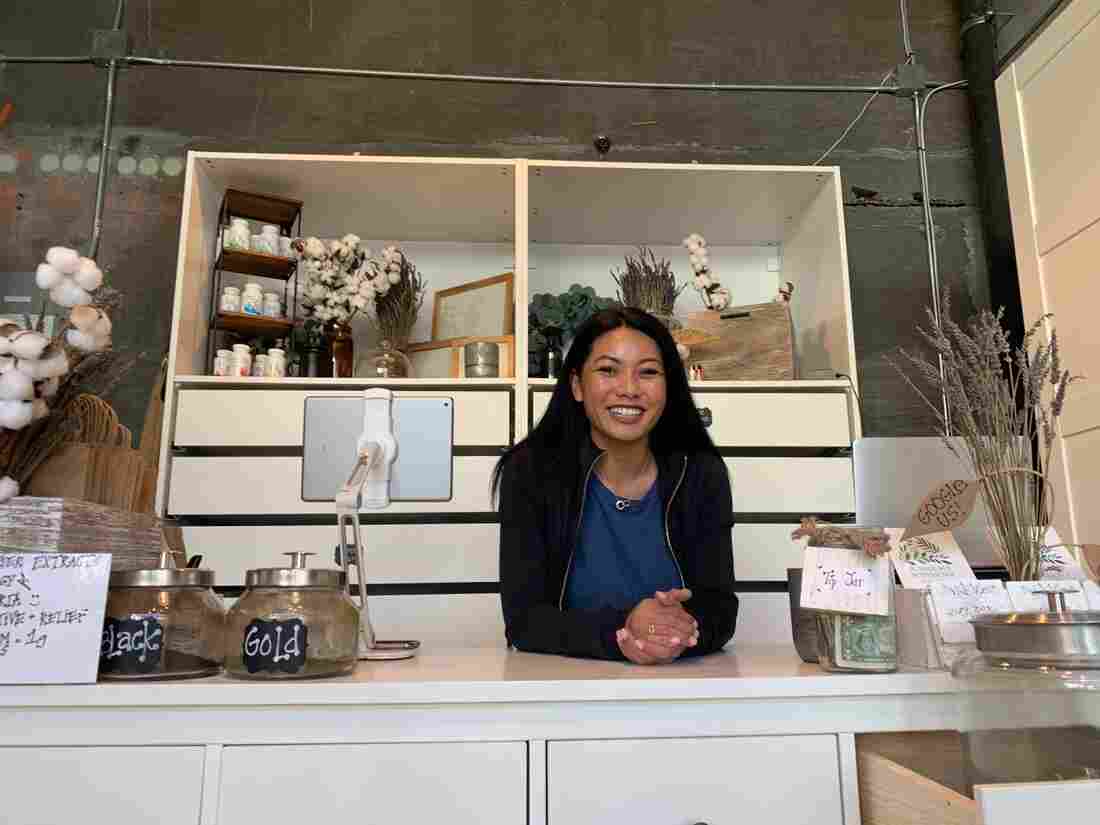 Linda Kline owns Bumble Bee Botanicals, which sells kratom in five upscale shops throughout the West, including this one in San Francisco. All her products are lab tested to ensure purity, Kline says. Lesley McClurg/KQED hide caption 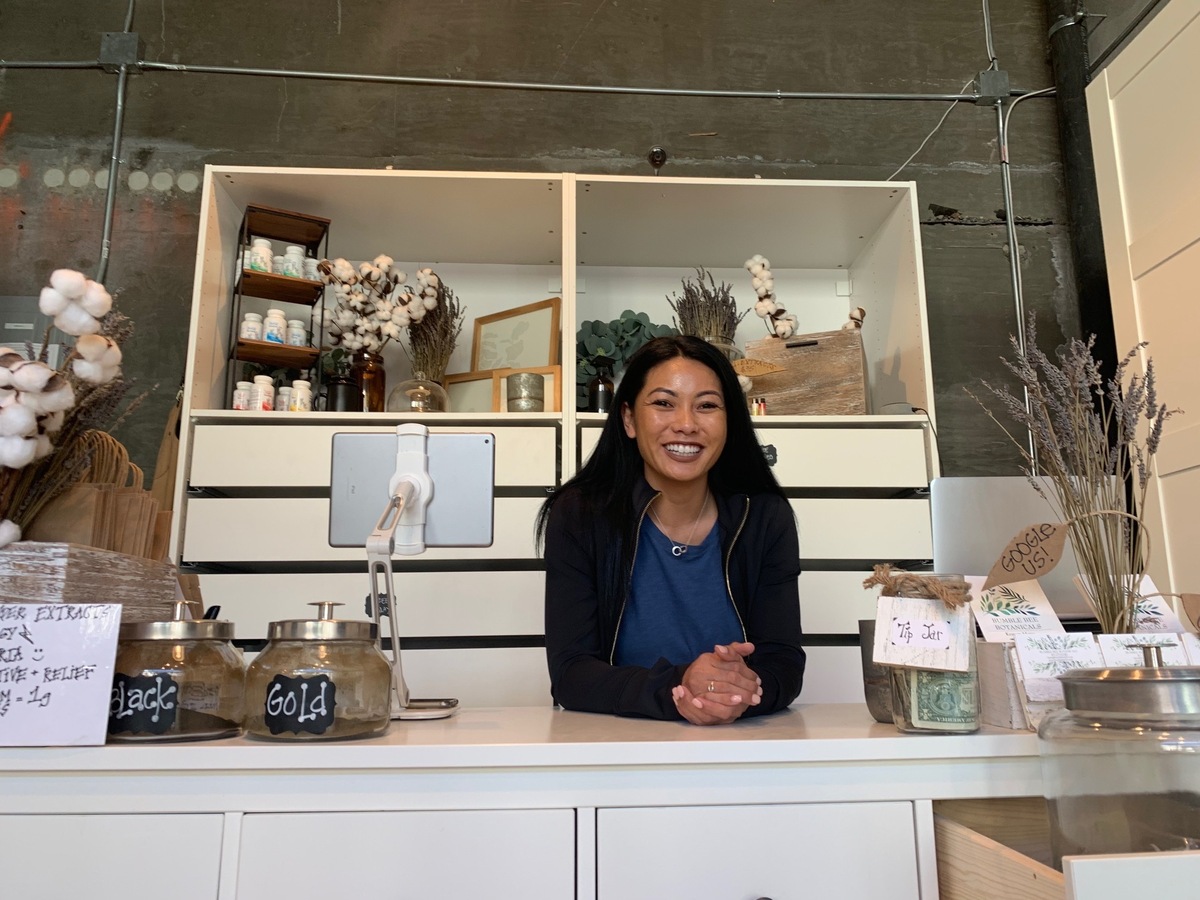 Linda Kline owns Bumble Bee Botanicals, which sells kratom in five upscale shops throughout the West, including this one in San Francisco. All her products are lab tested to ensure purity, Kline says.

Linda Kline, 33, based in Reno, Nev., sells kratom for a living. She says her several stores throughout the West have given her a new purpose in life. And while she herself doesn't have an opioid dependency, she credits kratom with turning around her mental health.

"I went from feeling desperate and hopeless to finding an alternative where I had full control over how I felt," she says.

She used to be paralyzed by anxiety and panic attacks. When her insurance carrier threatened to cut her Prozac prescription, she felt desperate. A friend suggested kratom, so she picked some up at a smoke shop.

"It almost feels like you're having just a little glass of wine," Kline says. "It's really relaxing. There's no melting of the walls."

The new habit cost about $6 a day — less than a glass of wine or fancy cup of coffee. But Kline says she couldn't always find a high-quality supply. The FDA has recalled dozens of salmonella-tainted products sold online or in convenience stores. The agency has also found toxic heavy metals in kratom supplements.

That's one reason Kline started her own chic boutiques, Bumble Bee Botanicals, devoted exclusively to kratom products that, she says, are all lab tested to ensure purity. She just opened her fifth location in less than two years. The shops offer 15 kratom strains at outlets in California, Idaho and Nevada.

Though Kline's website has a disclaimer that her products have not been evaluated by the FDA and "are not intended to cure, treat or prevent any disease/illness," some of her clients' online Yelp reviews claim kratom has dramatically relieved their chronic pain, insomnia, restless legs syndrome and more. 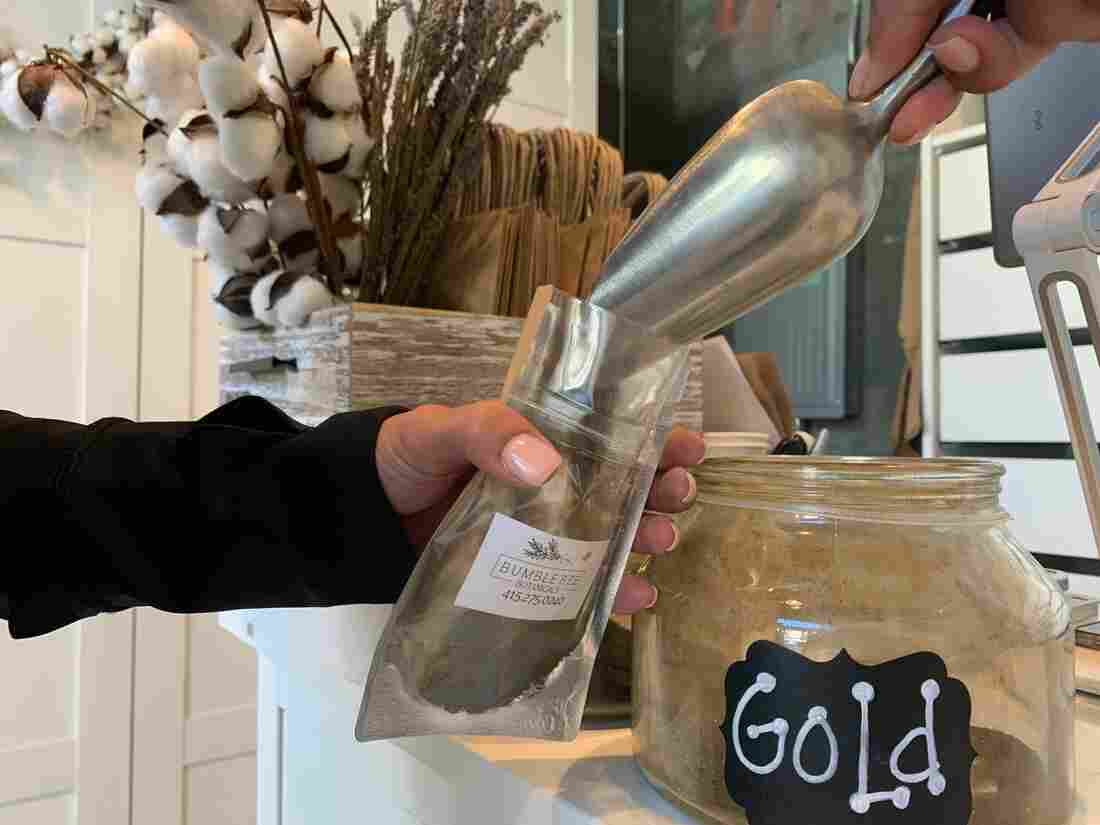 Gold Bali is a strain of kratom sold at Bumble Bee Botanicals in San Francisco. "It almost feels like you're having just a little glass of wine," Kline says of kratom. "It's really relaxing." Lesley McClurg/KQED hide caption 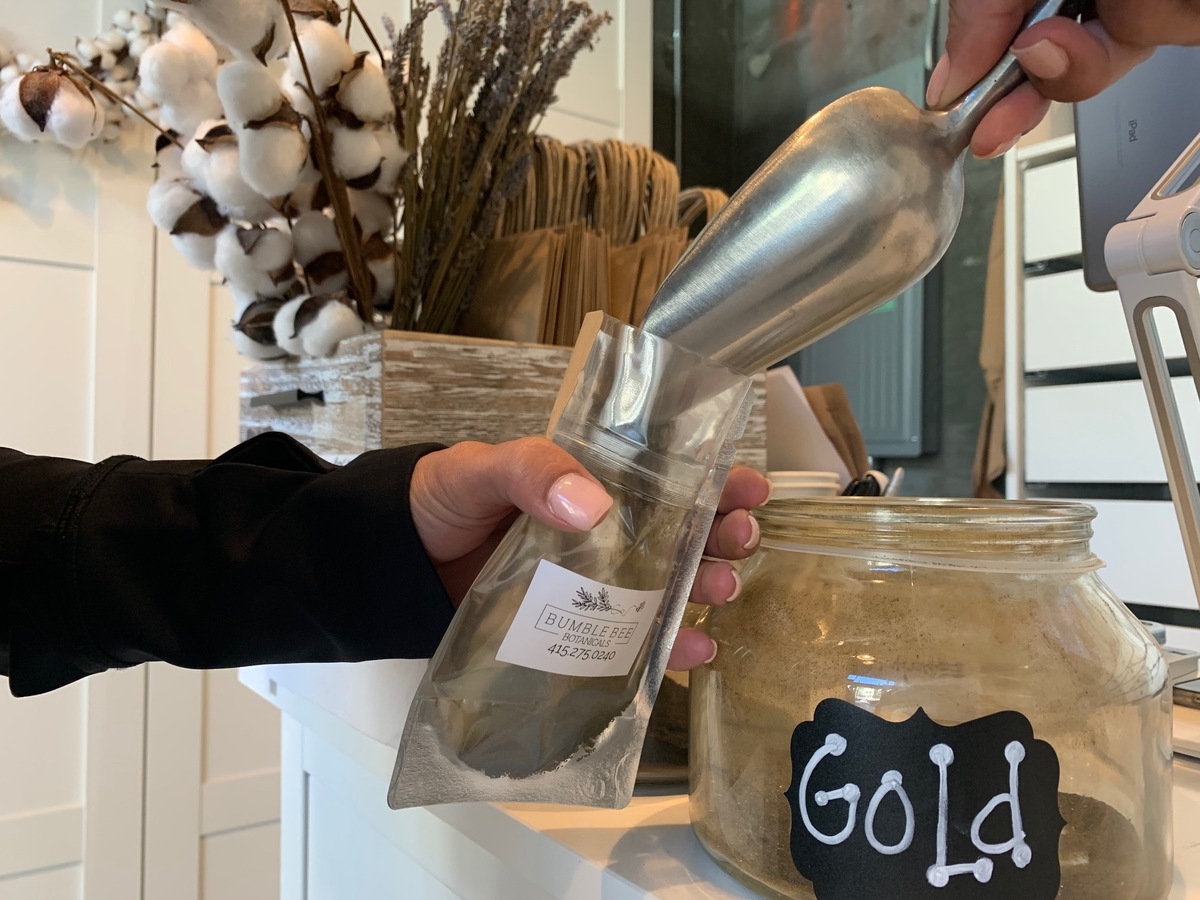 Gold Bali is a strain of kratom sold at Bumble Bee Botanicals in San Francisco. "It almost feels like you're having just a little glass of wine," Kline says of kratom. "It's really relaxing."

"My brother believed the marketing of kratom — that it was a natural herbal supplement that could provide you with the same benefits of an opioid without the risks," Mateo says.

"He was using them in a way that wasn't just for treating pain," Mateo says.

Eventually Marco wanted to kick his opioid addiction and saw testimonials on YouTube and Reddit that promised that kratom could be a way out. Soon Marco was popping kratom capsules multiple times a day.

During his freshman year at the University of California, Davis, the 19-year-old started hyperventilating regularly. The incidents worsened, becoming seizure-like episodes and ending in trips to the emergency room. During each hospitalization, the doctors were stumped. No one thought to test for kratom.

Marco died in his UC Davis dorm in February 2018, late on a Sunday night. The toxicology report listed "acute mitragynine intoxication" — a chemical constituent of kratom — as the cause of death.

"I think kratom needs to come with a much more serious caution that it is not harmless," Mateo says. "I'm very heartbroken."

In a recent 18-month period, the federal Centers for Disease Control and Prevention reported 90 kratom overdoses, although most involved a combination of other substances too.

"The data to support either the benefits or the harms for kratom is really, really poor," says C. Michael White, head of the Department of Pharmacy Practice at the University of Connecticut. "A lot of the information we have comes from single-case reports."

White says that animal studies suggest kratom could be an effective pain reliever, but the collection of human data has only just begun. He says scientists need to conduct a lot more research before the appropriate level of regulation is clear. White recently argued in the American Journal of Health-System Pharmacy that the safest place for kratom is behind pharmacy counters, for adults only, but with no prescription required.

McClain Haddow, spokesperson for the American Kratom Association, agrees that the product should be sold only to people over age 18.

"We would like vendors to register their product with the FDA and get a chemical analysis from a certified lab to insure the only ingredient is the naturally occurring alkaloid in the kratom plant," Haddow says. "Some manufacturers are spiking products with fentanyl, heroin or morphine to give users a high."

"I tell them I just don't know enough on the basis of science to tell them whether it's a great idea or not," says Steiger, who is also an associate clinical professor of medicine at the University of California, San Francisco.

The DEA describes kratom as an addictive substance that causes hallucinations, delusion and confusion.

"I have seen that people who use kratom end up having a very hard time stopping the use of it," says Steiger.

His patients report withdrawal symptoms such as nausea, sweats, aches and pains, loose stool, tearing and dysphoria. There is growing concern about kratom's effects on the heart and liver.

Steiger emphasizes that doctors have evidence-based treatments like buprenorphine and methadone to help people with an opioid addiction. He doesn't recommend self-medicating with kratom until more research is available.

"We just don't know enough about this chemical and the long-term use of it to know whether experimenting would lead to complications," Steiger says.