Accessibility links
Generic Version Of Pricey MS Treatment Didn't Reduce Drug Costs Much For Patients : Shots - Health News Drugs to treat multiple sclerosis can run $70,000 a year or more. Patients hoped competition from a generic version of one of the most popular brands would spur relief, but prices went up. Here's why. 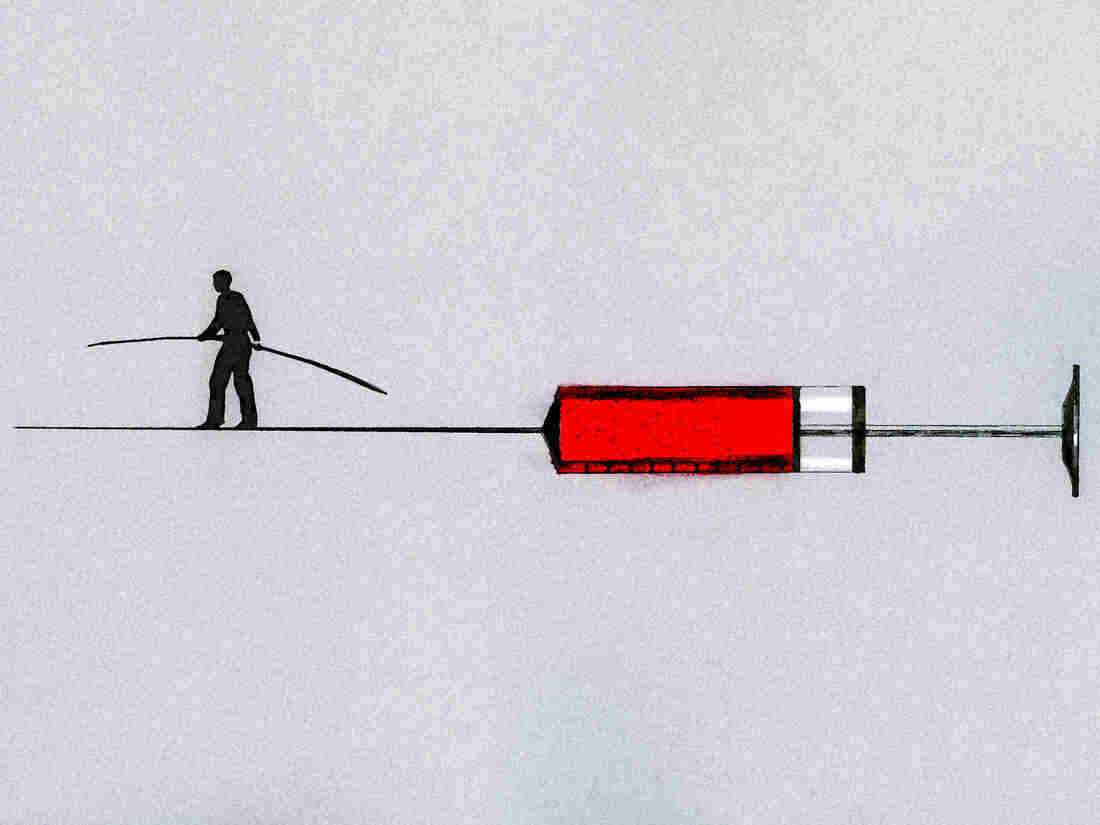 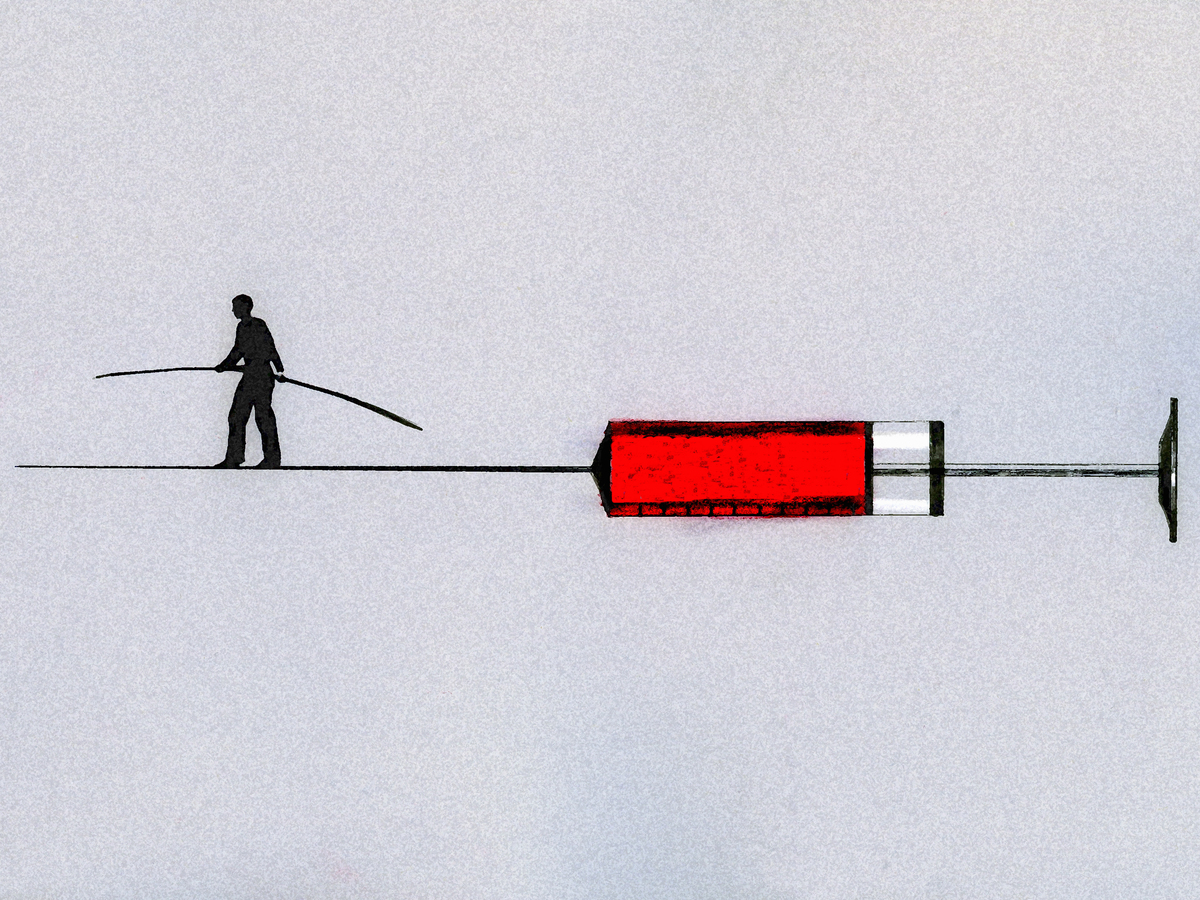 Generics may not have the same cost-lowering power for specialty medicines, such as multiple sclerosis drugs, researchers find. That's true especially when other brand-name drugs are approved to treat a given disease before the first generic is approved.

Sometimes, the approval of a new generic drug offers more hype than hope for patients' wallets, as people with multiple sclerosis know all too well. New research shows just how little the introduction of a generic version of Copaxone — one of the most popular MS drugs — did to lower their medicine costs.

MS is an autoimmune disease that gradually damages the central nervous system, disrupting communication between the brain and the rest of the body. Its symptoms are different from patient to patient across a lifetime but can include weakness, numbness, vision problems, tremors and even paralysis. There's no cure for MS, though some patients experience long remissions of symptoms.

Several prescription drugs can stave off multiple sclerosis attacks and slow down the disease, says Deborah Ewing-Wilson, a neurologist with University Hospitals Cleveland Medical Center. But the cost of some of the most effective medicines — which have undergone frequent price hikes over the years — can put added stress on her patients.

"They are extremely expensive," says Ewing-Wilson. On average, the medicines cost $70,000 per year, according to a 2017 study. Some prices have increased fivefold from when the drugs were first approved by the Food and Drug Administration.

Even with insurance, says Ewing-Wilson, patients can be left on the hook for anywhere from $3,000 to more than $50,000 a year. Some patients tell her they need to skip their medications altogether because they're unaffordable.

So when a generic version of the injectable MS drug Copaxone — also known as glatiramer acetate — was launched in 2015, Dan Hartung, a drug policy researcher at Oregon Health & Science University, and his colleagues thought that might spur some price relief. After all, if a cheap multiple sclerosis drug were available, wouldn't patients flock to it, forcing other manufacturers to lower their prices to compete?

Hartung and his colleagues used Medicaid data to follow prices and spending on 15 multiple sclerosis drugs from 2011 through 2017.

"There was a pretty minimal impact," Hartung says.

Instead of forcing other prices down, the generic seems to have prompted Copaxone's price per prescription (about a month's supply of the drug) to increase by $441 "immediately," according to their study, published this month in the journal Neurology. And other multiple sclerosis drug prices continued to climb, the study found.

Medicaid spending on multiple sclerosis drugs nearly tripled over the seven-year period from $453 million to $1.32 billion, according to the study. Although drugmakers pay rebates back to Medicaid, spending on these products "still more than doubled from $278 million to $600 million per year," the researchers reported.

Today, the list price for a once-daily injection of Copaxone is more than $7,000 for 30 syringes, compared with $1,500 or $1,950 for the same quantity of the generic version, according to GoodRx, a website that helps patients find prescription drug costs and coupons.

"Sometimes, a patient makes a decision based on cost and says, 'Oh my gosh, the drug is not on formulary' ... or 'It's going to cost me literally all my life savings,' " Ewing says, adding that she does her best to find a solution. "It's very, very sad."

Hartung says he thinks he knows at least part of the reason that the generic didn't bring down costs.

A year and a half before a generic for Copaxone was approved, Teva Pharmaceutical Industries, which makes Copaxone, introduced a new formulation of its brand-name drug. It was a higher dose of glatiramer acetate that needed to be taken less frequently.

He called it a "common tactic" employed by brand-name pharmaceutical companies to eat into generic competition. Pharmacists couldn't automatically switch patients to the generic at the pharmacy counter if they had already been taking the new version of the brand-name medicine.

What's more, multiple sclerosis drugs work differently for each patient. So switching to generic Copaxone from another drug, like Tecfidera or Ocrevus, simply might not be an option.

"Patients want to stay on whatever medication works for them," says Ewing-Wilson.

By the end of 2017, only 36% of patients on glatiramer acetate were using the generic version, according to the study.

Now, there are two manufacturers of generics, but that wasn't the case until the very end of Hartung's study. They have both since introduced 40-milligram versions of glatiramer acetate.

Stacie Dusetzina, a health policy professor at Vanderbilt University, says that Hartung and his team looked behind the curtain to see what really happens once a generic enters a "specialty" drug market. Specialty drugs tend to be expensive, complex medications that may be difficult to administer.

"We're promised we'll spend less on managing diseases once a generic is available," Dusetzina says, adding that it hasn't played out that way. "We've been, really been, looking to generics for some price relief, and we're probably not going to get it as quickly as we want."

Generics may not have the same cost-lowering power for specialty drugs, especially when other brand-name drugs are approved to treat a given disease before the first generic is approved, Dusetzina says. She saw a similar scenario play out, she says, when the generic version of Gleevec, a cancer drug, was approved.

Still, multiple sclerosis patients may eventually see lower prices at the pharmacy counter. It usually takes four or five generics to drive prices down significantly, according to an FDA analysis.

"Just because you don't see the price reduction today from the generic doesn't mean they're not coming," Dusetzina says.

That's cold comfort for many MS patients who can't afford the medicine they need right now. "For any of us, this would be an issue," says Ewing-Wilson. "But particularly for people with MS who often struggle to find insurance, struggle to have affordable health care ... this is terrible. It's ghastly."