Accessibility links
Survey: 3 Out Of 5 Americans Are Lonely : Shots - Health News A new survey of 10,000 Americans finds 61% of us are lonely. Young people, men and those new at their jobs are some of the hardest hit. 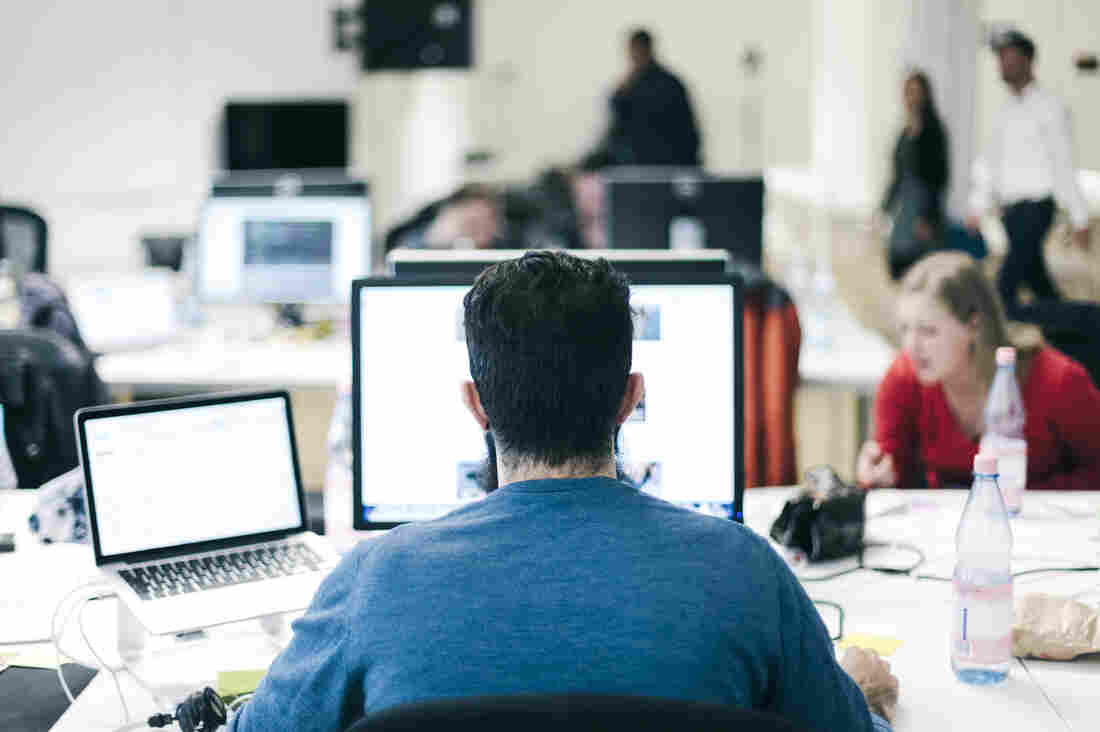 More than three in five Americans are lonely, with more and more people reporting feeling like they are left out, poorly understood and lacking companionship, according to a new survey released Thursday. Workplace culture and conditions may contribute to Americans' loneliness.

And loneliness may be on the rise. The report, led by the health insurer Cigna, found a nearly 13% rise in loneliness since 2018, when the survey was first conducted. (Cigna is a provider of health insurance for NPR employees.)

The report surveyed over 10,000 adult workers in July and August 2019, relying on a measure of loneliness called the UCLA Loneliness Scale, used as a standard within psychology research. Respondents rated their reactions to statements such as "How often do you feel outgoing and friendly?" and "How often do you feel alone?" which were used to calculate a loneliness score on an 80-point scale.

Pervasive loneliness "has widespread effects," says Bert Uchino, a professor at the University of Utah who studies relationships and health. It's strongly linked to mental health issues such as anxiety and depression.

It's an urgent time for the study of loneliness, Uchino adds. More and more research suggests that its impacts don't end with mental health. "Evidence is really pointing to the fact that relationships — the kinds of bonds you have with people, how close you are, how connected you feel to others — impact physical health as well," he says.

With only one follow-up report, it's unclear if the year-over-year rise in loneliness is a trend or just a blip in the data, says Uchino. There are ways to sample the population and control responses that would produce more reliable results, but surveying so many people strengthens these findings, he adds.

The report found several factors that were linked to increased feelings of isolation in 2019. Loneliness appeared to be more common among men. The survey found 63% of men to be lonely, compared with 58% of women.

Social media use was tied to loneliness as well, with 73% of very heavy social media users considered lonely, as compared with 52% of light users.

But feelings of isolation were prevalent across generations. Gen Z — people who were 18 to 22 years old when surveyed — had the highest average loneliness score on the 80-point scale (about 50), and boomers had the lowest (about 43). We might think of older people as being the loneliest, but this pattern is actually consistent with results from other studies, says Julianne Holt-Lunstad, a psychology professor at Brigham Young University. "We need to recognize that no one is immune," she adds.

This new research dives deeper into the factors behind these feelings of isolation than the previous report, and it found that conditions in the workplace made a difference in how lonely people felt.

The report found people with good co-worker relationships were 10 points less lonely on the 80-point scale, and those who reported a good work-life balance were less lonely as well. When colleagues felt like they shared goals, average loneliness scores dropped almost eight points.

Employees in the first six months of their jobs had loneliness scores more than six points higher than those who had held their positions for over a decade. Workers who said they had a close friend at work were less lonely.

"In-person connections are what really matters," says Doug Nemecek, chief medical officer for behavioral health at Cigna. "Sharing that time to have a meaningful interaction and a meaningful conversation, to share our lives with others, is important to help us mitigate and minimize loneliness."

Employers also have an incentive to address loneliness: Lonely workers were more likely to miss work due to illness or stress, and more of them felt their work wasn't up to par, according to the report. Researchers are still struggling to find effective methods to ease loneliness, and this data could spark ideas for interventions, Holt-Lunstad adds.

One optimistic note: More than three-quarters of survey respondents had close relationships that bring them emotional security and well-being. And respondents without such relationships had a loneliness score of 57 out of 80, almost 15 points higher than those with them.

In a previous version of this story, we incorrectly said the survey found a 7% rise in loneliness since 2018. It was a nearly 13% rise. In addition, citing a draft version of the report, we incorrectly said that 72% of very heavy social media users were lonely, as compared with 51% of light users. The correct numbers, per the final report, are 73% and 52% respectively.