Accessibility links
Medicaid Block-Grant Option Rolls Out : Shots - Health News States can now apply to set up their Medicaid program with capped funding from the federal government. With this move, the administration delivers on a long-held conservative goal. 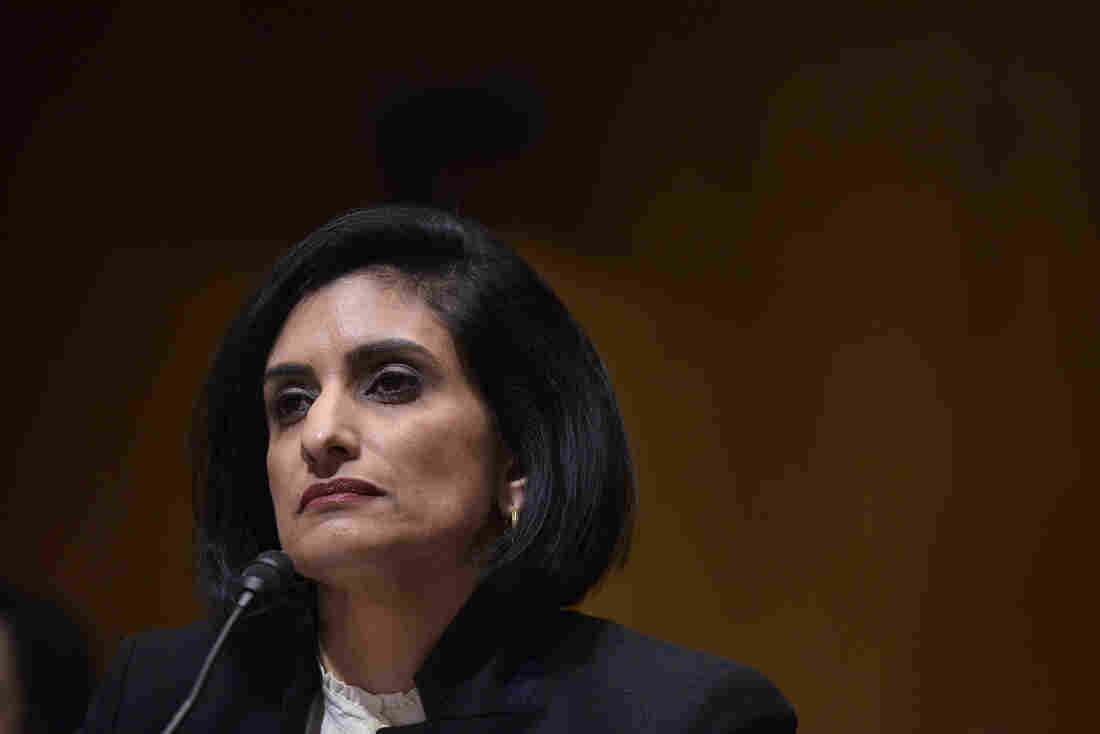 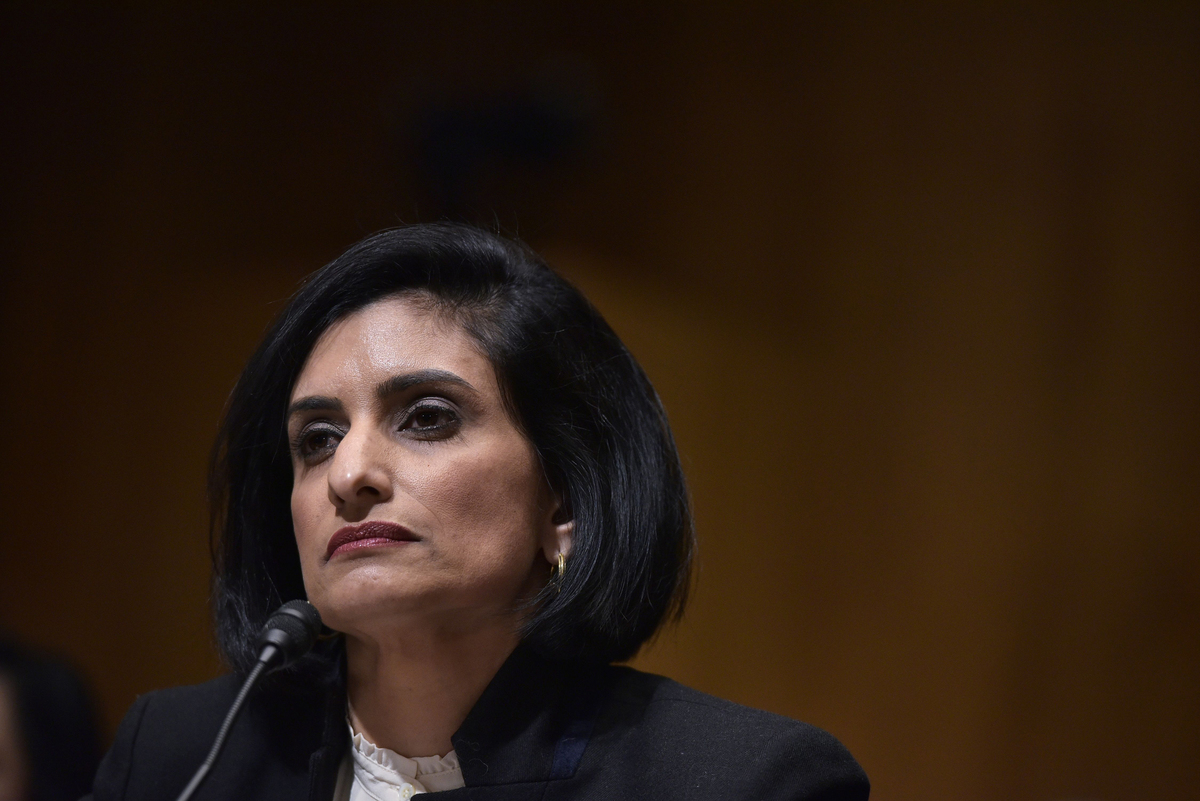 Seema Verma, administrator of the Centers for Medicare and Medicaid Services, announced a new way states can operate their Medicaid programs.

The Trump administration wants to dramatically alter the way the federal government gives money to states for Medicaid.

On Thursday, Seema Verma, the administrator of the Centers for Medicare and Medicaid Services, announced a new pathway for states to receive a capped amount of federal dollars for part of the program. The new demonstration program, called Healthy Adult Opportunity, would not be mandatory for states and would not affect all Medicaid beneficiaries, only adults under age 65 who are not disabled.

But for states that adopt the new approach, it could profoundly reshape how Medicaid operates.

Medicaid covers health care for 71 million people across the country — most are low-income people, disabled people, and children. It's set up as a federal-state partnership — a state contributes money to cover its Medicaid population, and the federal government matches that contribution using a formula based on a state's per capita income. Therefore, low-income states get more from the federal government than high-income states do.

There is currently no limit to what the federal government contributes — Medicaid beneficiaries across the country have a right to whatever care they need for however long they need it.

With the announcement, CMS is inviting states to design Medicaid plans that work with a new capped-funding approach; they have flexibility in how they design these plans and could be exempted from certain Medicaid requirements. For example, the plan would allow states to create a formulary to pick and choose which drugs are covered — normally Medicaid covers all drugs.

In her remarks, Verma anticipated critics who might consider this an attack on the safety net. She spoke passionately about the purpose of Medicaid, calling it "a lifeline for millions of Americans."

But she justified the new approach as a means to ensure financial sustainability for the program in the long term by letting states operate with a defined budget. This has historically been called a "block grant," but Verma was careful not to mention those words in her remarks.

With this announcement, the Trump administration is delivering on a longtime conservative ideal — block grants for Medicaid have been discussed for nearly as long as Medicaid has existed, going back to the Nixon administration. Every time, either Congress or the White House has declined to take the plunge, and Medicaid has remained open-ended.

"When enrollment goes up or during an economic downturn or the cost of prescription drugs go up, it costs the states more money to finance their programs, but the federal government matches those dollars to states," said Robin Rudowitz, vice president of the Kaiser Family Foundation and co-director of the foundation's program on Medicaid and the uninsured.

Whether Thursday's announcement will upend that system depends on what states do with the new guidance. States will have to ask CMS for a waiver and wait for approval. It's usually a lengthy process, although on Thursday, Verma indicated the agency would be attempting to streamline things by creating a template application. Most likely, it will be months before this plan could go into effect in a state.

There's also a question about whether this would be legal. Another major initiative from Verma to transform Medicaid was permission for states to get a waiver to make "work requirements" part of the program. That effort has been blocked in the courts and is currently on appeal.

One the few states that put into effect a work requirement — a requirement for some beneficiaries to report that they are working, going to school or doing community service — was Arkansas, and one analysis found thousands of people lost their health coverage as a result.

That has created the legal challenge for the government. The legal argument against them, which has made headway in courts, is that work requirements fail to "promote the objectives of the Medicaid program, which is primarily to provide affordable health coverage to low income people," said Rudowitz.

Oklahoma Gov. Kevin Stitt joined Verma at Thursday's announcement, calling the new approach to Medicaid "a game-changer." He said his state hopes to be among the first in the nation to apply for the waiver. Stitt, a Republican, is promoting his Medicaid plan as an alternative to a measure on the ballot in the upcoming election to expand Medicaid in his state, a move he said would be "wrong and will be ineffective."

He said the waiver would allow the state to innovate, including finding new ways to contain costs and adding premiums and work requirements to the plan for adults. He said his approach will create "expectations for able-bodied individuals to see this as a true trampoline to their future."

This move is geared toward red-state governors like Stitt, said Jamila Michener, an assistant professor of government at Cornell University. "They can't outright support Medicaid expansion or support Obamacare," also known as the Affordable Care Act, she said. "Work requirements were a way for them to kind of help save face, to expand Medicaid, but still be able to make it appear as though they were remaining true to their conservative bona fides." Now that work requirements are tied up in litigation, this presents another way to accomplish a similar political goal, she says.

Past efforts through the decades to institute block grants in Medicaid have come through Congress and would have changed Medicaid in all states at once — most recently in 2017 as part of the plan to repeal and replace Obamacare. Since states will have to apply for the Healthy Adult Opportunity waiver, this won't change Medicaid in many states that don't opt in. (Washington Gov. Jay Inslee, for one, tweeted, "Hard pass.")

Edwin Park of the Georgetown University Center for Children and Families said this kind of arrangement is a bad deal for states. "[They're] placing a fiscal straitjacket on themselves that will only lead to eventual cuts to their programs and harmful effects to their budgets," he said.

It's a political risk for the Trump administration as well. Polling suggests that Medicaid is very popular and that capping federal spending in the program is not. "Medicaid is more popular than it has ever been because people understand that if it's not their immediate family, their kids, it's their parents, it's neighbors and others who rely on the program," Park adds.

Michener pointed out the wonkiness of this move might insulate it from the disapproval of voters in an election year.

"If there's a way to get at Medicaid, which is what this administration [has been] trying to do the entire time, then this is the way," she said. And it helps, she adds, that the Trump administration can make this change on its own: "You don't have to fight Congress — like you did with repeal and replace — and lose in the end."

In a previous version of the story, we incorrectly said Arkansas was the only state to have put Medicaid work requirements into effect. A few other states have done so.