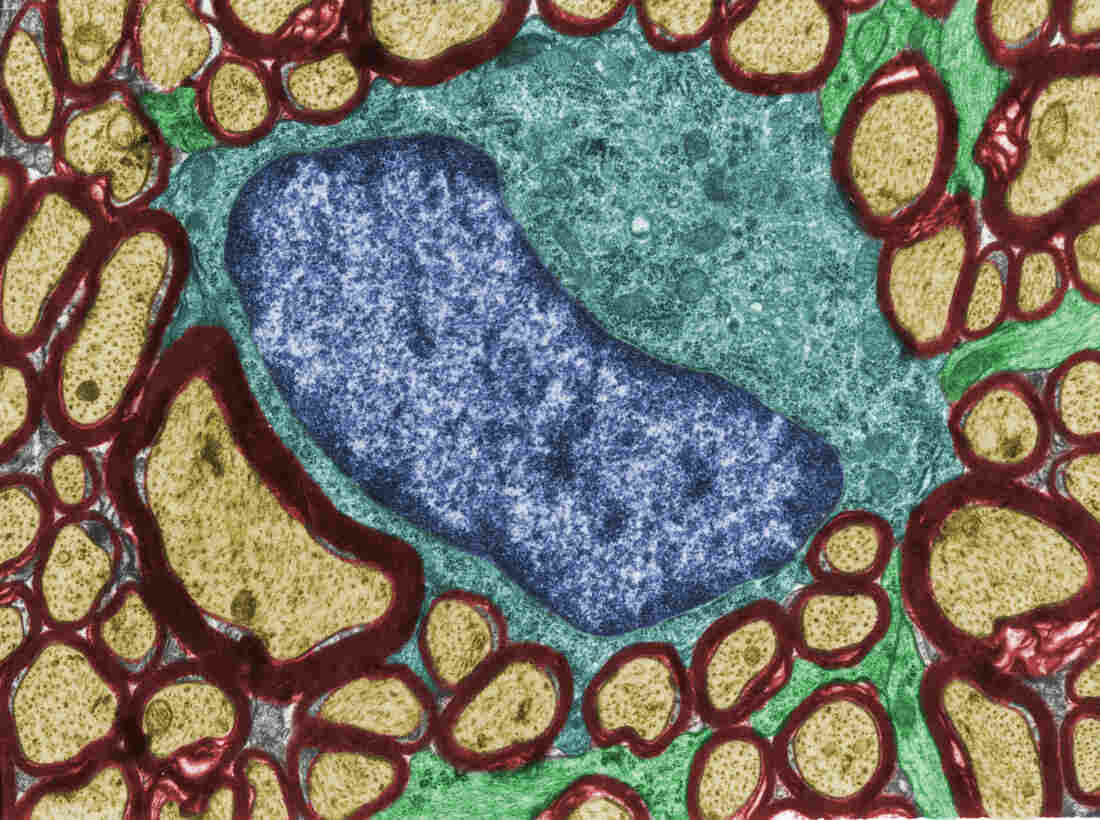 This image from an electron microscope shows a cross-sectional view of an oligodendrocyte (blue) among nerve fibers coated with myelin (dark red). In models of autism spectrum disorder, oligodendrocytes appear to create too much or too little myelin. Jose Luis Calvo/Science Source hide caption 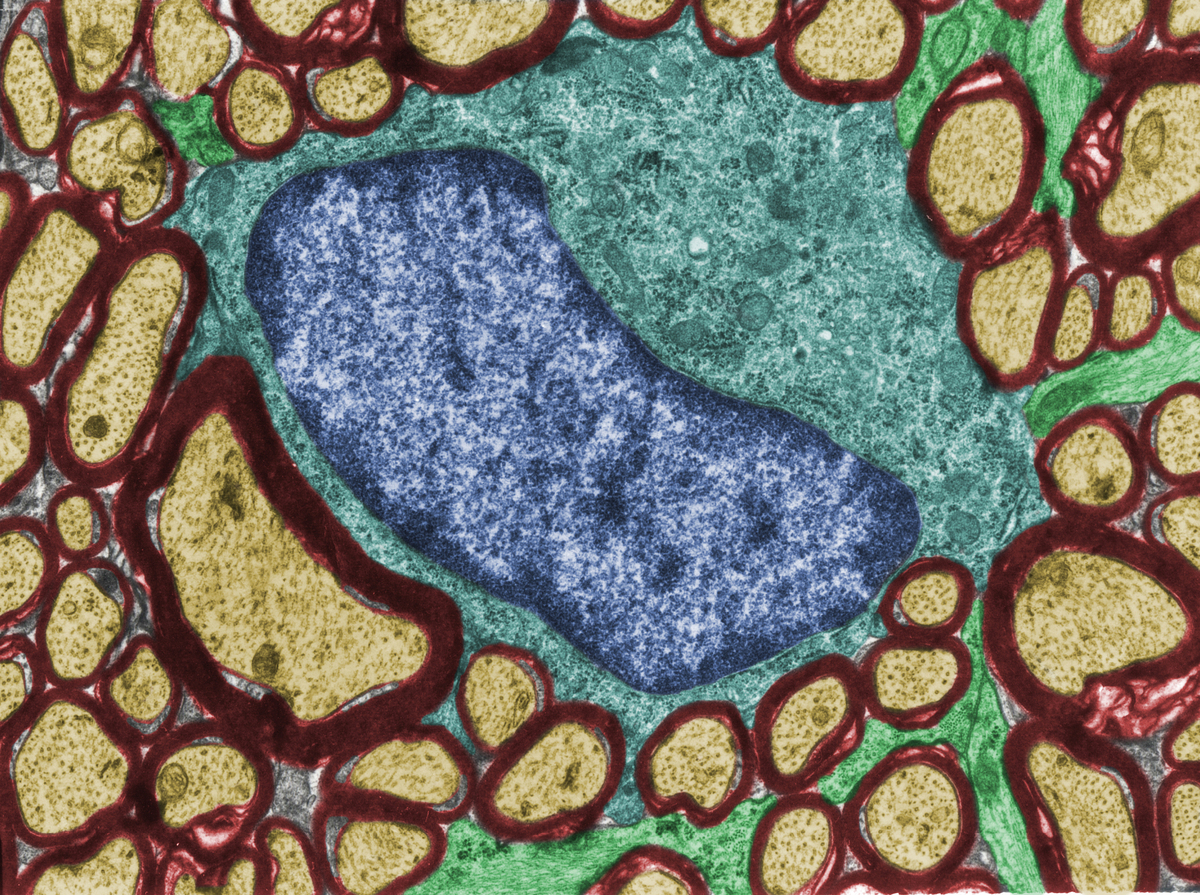 This image from an electron microscope shows a cross-sectional view of an oligodendrocyte (blue) among nerve fibers coated with myelin (dark red). In models of autism spectrum disorder, oligodendrocytes appear to create too much or too little myelin.

Scientists have found a clue to how autism spectrum disorder disrupts the brain's information highways.

The problem involves cells that help keep the traffic of signals moving smoothly through brain circuits, a team reported Monday in the journal Nature Neuroscience.

The team found that in both mouse and human brains affected by autism, there's an abnormality in cells that produce a substance called myelin.

That's a problem because myelin provides the "insulation" for brain circuits, allowing them to quickly and reliably carry electrical signals from one area to another. And having either too little or too much of this myelin coating can result in a wide range of neurological problems.

For example, multiple sclerosis occurs when the myelin around nerve fibers is damaged. The results, which vary from person to person, can affect not only the signals that control muscles, but also the ones involved in learning and thinking.

The finding could help explain why autism spectrum disorders include such a wide range of social and behavioral features, says Brady Maher, a lead investigator at the Lieber Institute for Brain Development and an associate professor in the psychiatry department at Johns Hopkins School of Medicine.

"Myelination could be a problem that ties all of these autism spectrum disorders together," Maher says. And if that's true, he says, it might be possible to prevent or even reverse the symptoms using drugs that affect myelination.

"If we get to these kids really early, we might be able to change their developmental trajectory and improve their outcomes," Maher says.

"It's possible to make these cells healthier," adds Dr. Daniel Weinberger, director of the Lieber Institute and a professor at Johns Hopkins. "And it's never been a target of treatment in autism."

The study adds to the evidence that myelination problems are present in "several developmental disorders and in particular in autism," says Dr. Flora Vaccarino, a professor in the neuroscience department at Yale who was not involved in the research.

It also shows how one faulty regulatory system in the brain can lead to either too much myelination or too little, she says. And that may help explain why people with autism spectrum disorders may have brains that are either unusually large or unusually small.

Researchers involved in the study came upon the myelination problem while looking for something else.

They were studying brain cells in mice with a gene mutation that causes Pitt-Hopkins syndrome, which can include features of autism spectrum disorder. "We saw a signature that suggested there might be something wrong with myelination," Maher says. "So that was pretty surprising to us."

More experiments confirmed that "there was a clear deficit," in the cells that control myelination, which are called oligodendrocytes, he says. This was true not only in mice with the Pitt-Hopkins syndrome, but in other mouse models of autism, too.

Next, a biostatistics expert named Andrew Jaffe looked at a genetic analysis of brain tissue from people with autism who had died. And that experiment also found problems with the system that controls myelination.

To fully understand what's going on though, the problem needs to be studied in developing brain tissue, Vaccarino says.

That should be possible, she says, using tiny clusters of human brain cells called brain organoids, which can be grown in a petri dish. Vaccarino's lab has created brain organoids from the cells of people with autism spectrum disorder, which might reveal how the myelination problems begin, she says.

Brain myelination "really does not start in earnest until the first year or two of life," Weinberger says. "And this is around the time that autism is first apparent."

That might eventually mean a treatment that corrected a problem with myelination could help children who are diagnosed early in life, he says. Several such treatments are being developed to treat people with multiple sclerosis, a disease that erodes myelin.