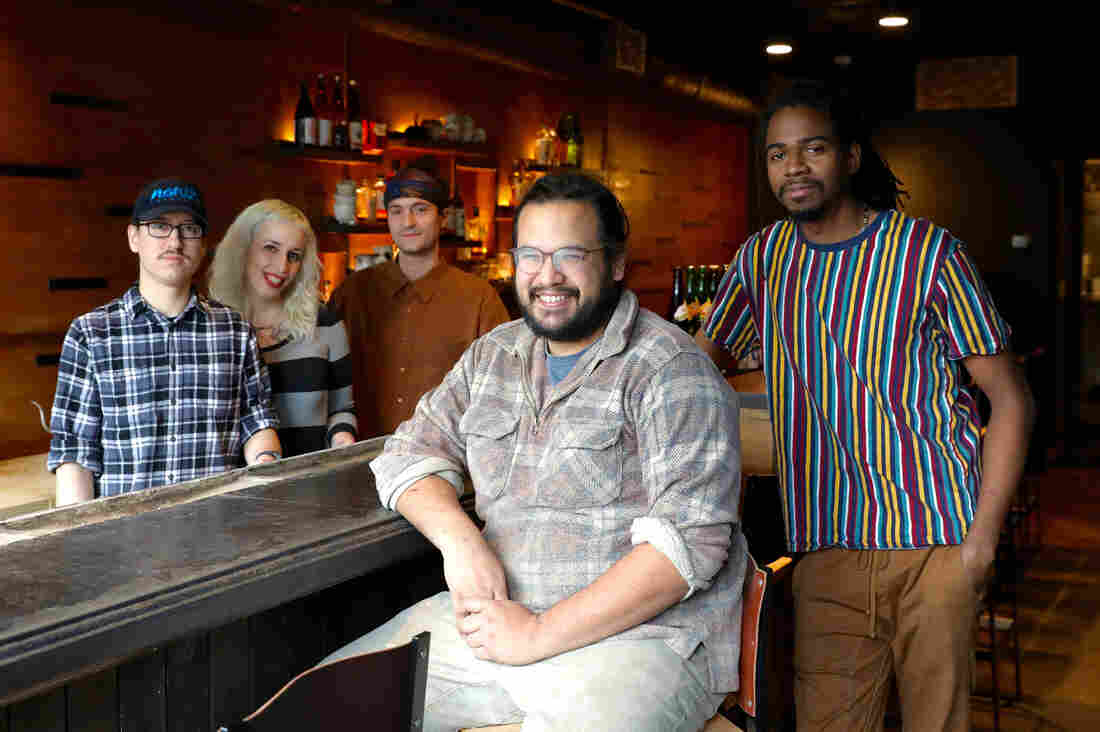 James Mark (center) inside his restaurant Big King, along with cooks (from left) Oscar Lange, Emily Joslyn, Peter Kachmarsky and JC Kuvaszko. Mark employs fewer than 50 people so isn't required to provide health benefits. But it helps with staff retention, he says, and is the right thing to do. Christine Chitnis for KHN hide caption 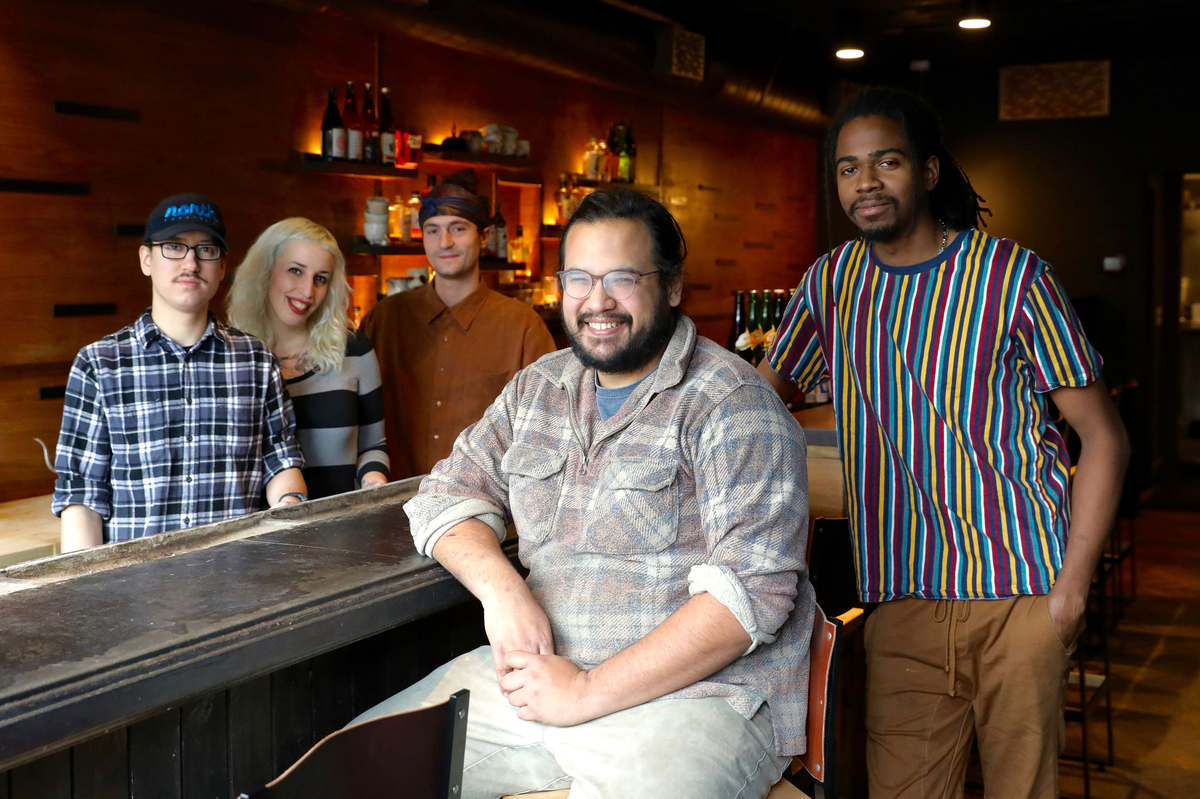 James Mark (center) inside his restaurant Big King, along with cooks (from left) Oscar Lange, Emily Joslyn, Peter Kachmarsky and JC Kuvaszko. Mark employs fewer than 50 people so isn't required to provide health benefits. But it helps with staff retention, he says, and is the right thing to do.

But in 2018, the Providence chef and restaurateur spent almost double his personal income on health insurance for his employees: $54,000 to cover a dozen or so people, compared with the $35,000 he paid himself as a salary.

Mark spends most of his time at Big King, which he describes as his "small and strange," experimental Asian restaurant in Providence's trendy West Side. The handwritten menu changes daily. At downtown's Dean Hotel, he also runs the small cocktail bar and the no-reservations restaurant North, which serves dishes like smoked shiitake ice cream and crab and fried kabocha with pumpkin miso.

Mark employs fewer than 50 people, all told, so he isn't required to provide them health benefits. But he thinks doing so helps with staff retention and is the right thing to do.

After all, if a sous-chef needed an emergency appendectomy, the bill for a patient without insurance could be financially devastating. Offering health benefits, he says, is crucial to treating his employees' jobs as "viable, long-term work."

That's why Mark, who studied at nearby Johnson & Wales University and trained at restaurants in Providence and New York City, has joined a growing chorus of small-business owners who are supporting "Medicare for All," or some other type of government-sponsored, universal health plan.

He says his concern with the way things are right now is not just the financial burden he feels in paying for his employees' benefits, though that's part of it. 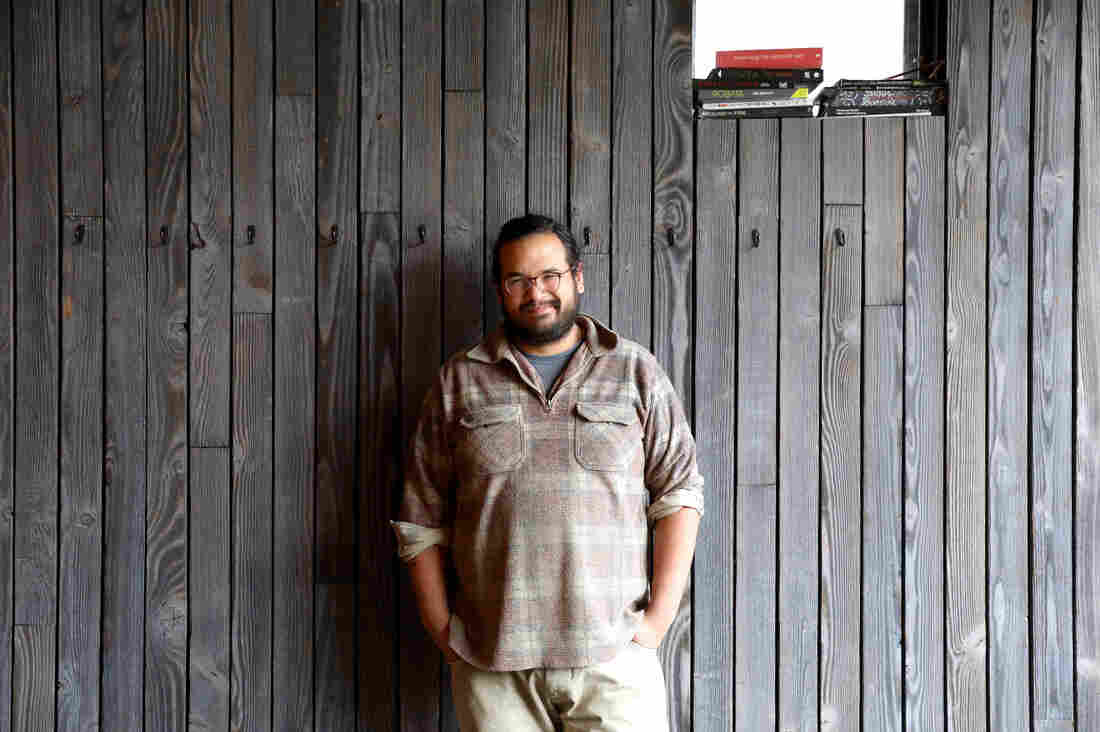 Trying to navigate a confusing system of health insurance options to offer his employees takes time that Rhode Island chef and restaurateur James Mark says he doesn't have. "I'm running around trying to keep my small business afloat, just trying to do my job," Mark says. "I don't have time to look up different health plans." Christine Chitnis for KHN hide caption

"I could make a lot more money if I didn't have to pay that," he acknowledges. But the greater burden, he says, are the hours of administrative paperwork he has to deal with — and all the confounding choices from insurers. Though he tries to pick a good option, he says, "I have no idea if it's a good [health] plan or a bad plan, in comparison to everything else."

Restaurant industry groups have largely opposed the idea of a single-payer system, worrying it would mean tax hikes. But some individual owners are increasingly open to the idea.

Big companies can hire benefits consultants and managers who arrange and administer employee insurance. Owners of very small businesses and restaurants might otherwise decide to let employees fend for themselves. (Under the ACA, only employers who have the equivalent of 50 or more full-time workers incur penalties if they don't offer health benefits.)

But, after weighing their choices, Mark and some other restaurant owners conclude they would accept higher taxes if the government would take over the task of insuring their workers.

As premiums and health costs rise, the broader industry seems to be eyeing the option with a mix of new curiosity and old concerns.

The National Restaurant Association, for instance, opposed the Affordable Care Act and other Democratic reform efforts that were less sweeping than the single-payer approach. Today, the trade group doesn't have a specific stance on Medicare for All, though a spokesperson points to concerns about the eventual tax burden its members could face.

Aaron Frazier, spokesperson for the restaurant association suggests members could get a better health insurance deal by using the organization's association health plan, which is collectively negotiated by the trade group.

Those association health plans — a longtime favorite Republican concept — are a cornerstone of the current White House's health policy. But they remain controversial and are often held to less stringent coverage standards than other forms of insurance. They may have caps on coverage spending, for example, and may not cover some of the Affordable Care Act's "essential benefits," such as maternity care and prescription drugs.

A middle ground, proposed by many of the Democratic presidential candidates, might be a "public option," a government-run health plan that individuals — or their employers — could pay to join if they didn't like their other options.

That approach could "go a long way" toward addressing some of the concerns restaurant owners have, says Linda Blumberg, a health policy fellow at the Urban Institute, a Washington think tank.

On the 2020 campaign trail, presidential candidates Bernie Sanders and Elizabeth Warren talk about how their plans would replace the current, private insurance system with a single, government-run program. Their proposed systems would eliminate most cost sharing, so patients pay very little out-of-pocket, and would be financed through taxes. Warren, a Massachusetts senator, says she would implement her plan through two legislative steps, while Vermont's Sanders would do so in one.

Rather than focusing on these details, Mark and other restaurateurs endorsing this approach emphasize the result: having the government step in and guarantee coverage to everyone.

"We would all, everyone involved, be positively affected," argues Daniel Myers, who co-owns Loyal Nine, a cafe by day and restaurant by night, in Cambridge, Mass.

Loyal Nine insures about a dozen employees, who must meet a $3,000 deductible before coverage kicks in. Subsidizing employee coverage makes sense, Myers says — good workers who have health insurance are more likely to stay in the job.

Take Jen Wittlin, who manages Providence's Dean Bar and has worked on and off with James Mark since 2012. She says having good health insurance is non-negotiable, for her. She was diagnosed and treated for medullary thyroid cancer, and still needs daily medication and regular endocrinology checkups.

"I didn't have the option of working somewhere that didn't offer health care," she says.

She used to work a full-time gig at the YMCA (in addition to her job at North), in order to have access to the Y's employer-sponsored health care. Signing up for the restaurant's health benefit instead, she says, enabled her to quit that second job.

"People are forced to sacrifice their creative abilities and go into corporate positions because those are guaranteed benefits," she says of other people she knows. "To have it paid for! That's the lure of this place."

Still, offering insurance can be a big expense for employers. Myers estimates 10% of his payroll goes to health care. His business is too small to bargain with the insurance company. So each year, the price goes up – and how much it goes up can vary.

"You're pushed up against a wall," Myers says. "We have no ability to negotiate our prices. They are what they are."

Bigger businesses have purchasing power to wrangle a favorable deal with an insurance company. Smaller ones don't, leaving many restaurateurs in a perilous position, says Paul Ginsburg, an economist who directs the USC-Brookings Schaeffer Initiative for Health Policy. It's pressures like these that fuel these restaurateurs' support for Medicare for All, even though the cost and financing of such a plan are still just pencil sketches.

Mark says he doubts he would pay more in taxes under Medicare for All than he spends on health care now. Even if he did, he says, it would be a plannable expense. That — and the knowledge that everyone else shares in the burden — would justify the increase, he believes.

Still, Richard Wall, who owns Both Ways Café and Catering, in Seattle, has questions. How would Medicare for All's coverage compare with the insurance he currently gets through his wife's employer? He's unsure.

And Adam Orman, who co-owns Austin-based L'Oca d'Oro and subsidizes his employees' health care with a direct primary care contract and other additional benefits, worries there would still be "so many layers of bureaucracy."

Still, no longer having to deal with the confusing paperwork of the current system, and knowing his employees are covered, "sounds really good," Wall says. Orman calls it "a step in the right direction."

The choice between plans and doctors, which is cited as a benefit of the current market-based system, often doesn't seem an asset to small restaurateurs and their workers.

Recently, Mark decided to explain to his staff how their insurance works. In response, he got "glazed looks," he says. a "It's a system that's really confusing."