Accessibility links
Life Under Coronavirus Quarantine In The U.S. : Shots - Health News Hundreds of American travelers returned from Wuhan, China and are now under federal quarantine for two weeks. Some are happy to be back in the U.S., but wish they weren't confined in military bases.

Life In Quarantine: What It's Like For The U.S. Evacuees From Wuhan

Life In Quarantine: What It's Like For The U.S. Evacuees From Wuhan 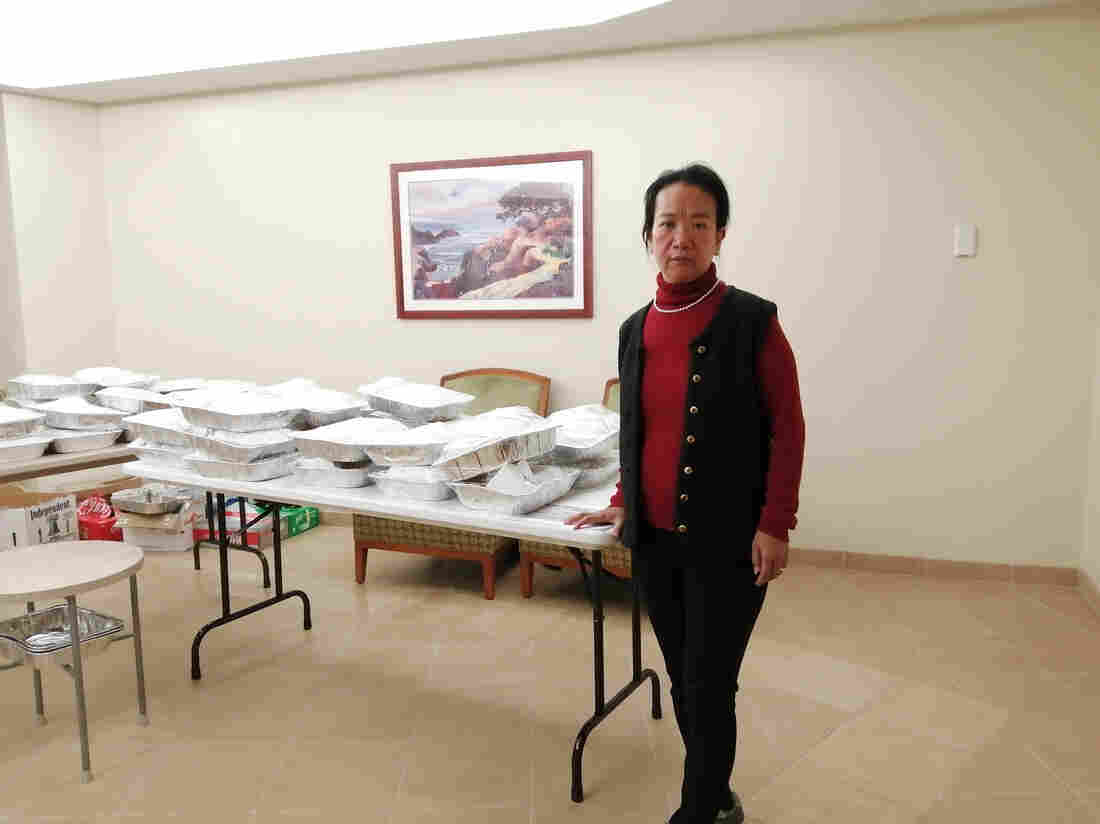 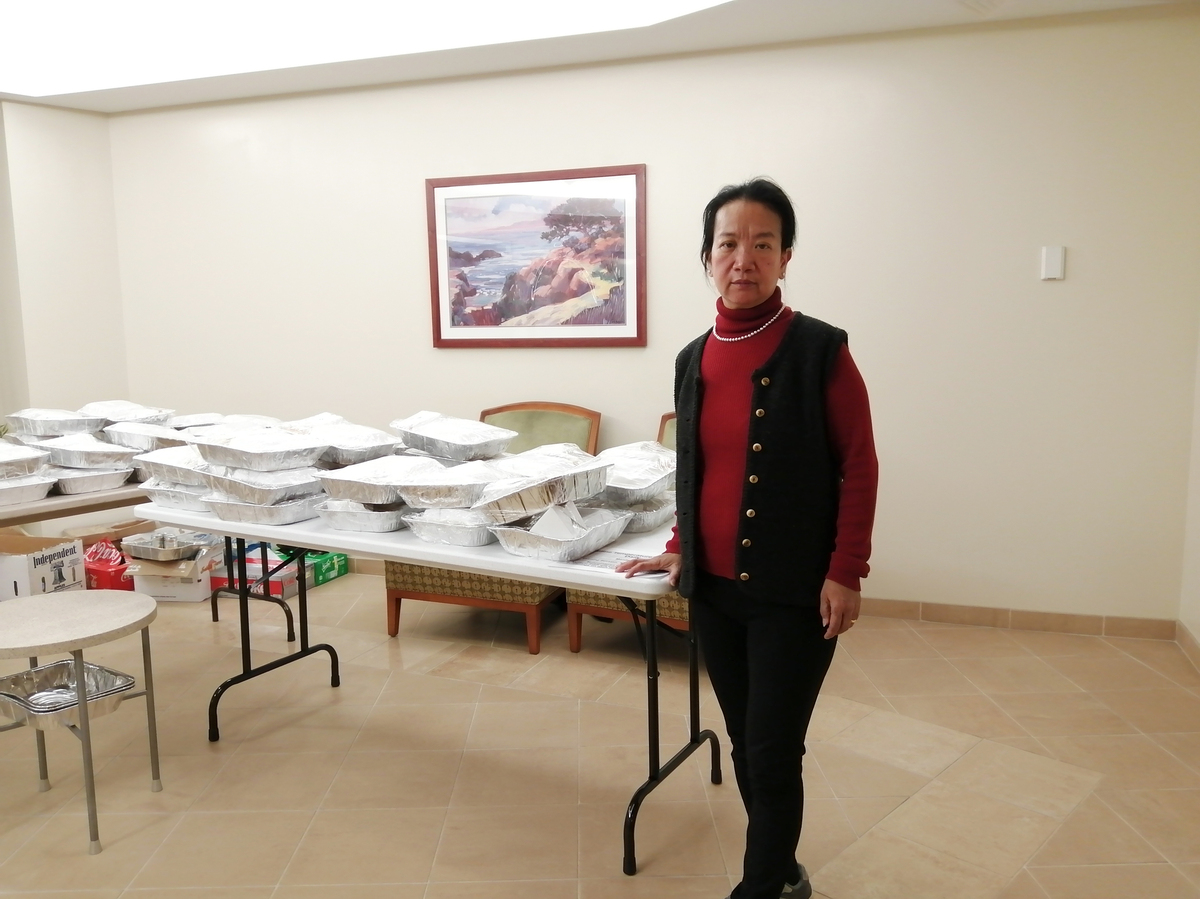 Chunlin Leonhard is grateful to be back in the United States, even though she's now living under the first federally mandated quarantine in 50 years. "The primary feeling is a sense of relief that I'm back in the States," she says. "I'm just tired and glad and grateful."

Leonhard, a 55-year-old professor at Loyola University of the New Orleans College of Law, arrived at the Travis Air Force base in California on Wednesday as part of a state department evacuation of Americans who were in Wuhan, China, the epicenter of the global coronavirus outbreak. She'd been visiting relatives there.

Leonhard's quarters at the military base where she is quarantined are simple, but comfortable, she says. They resemble standard hotel rooms. Her space has a clean bathroom, internet access and a television.

The evacuees can leave their rooms, and go outside for walks within a fenced-in area. Food is provided three times a day. "I don't feel that cramped," she says. Health officials are trying to make things easier for the evacuees, she adds.

Ningxi Xu, another evacuee under quarantine, says she can order supplies online and have them delivered. She's been working remotely. 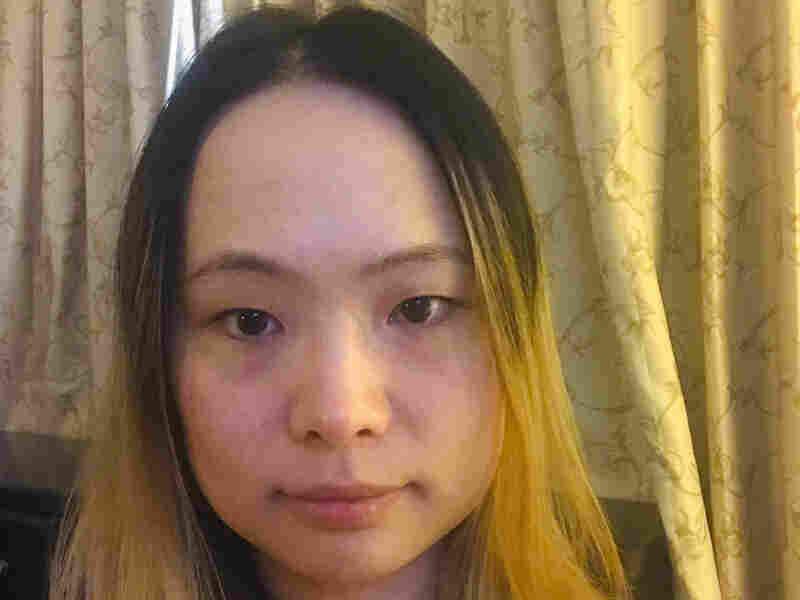 Ningxi Xu is investment manager in Jersey City. She is under quarantine for two weeks in California after returning from Wuhan, China. Ningxi Xu hide caption 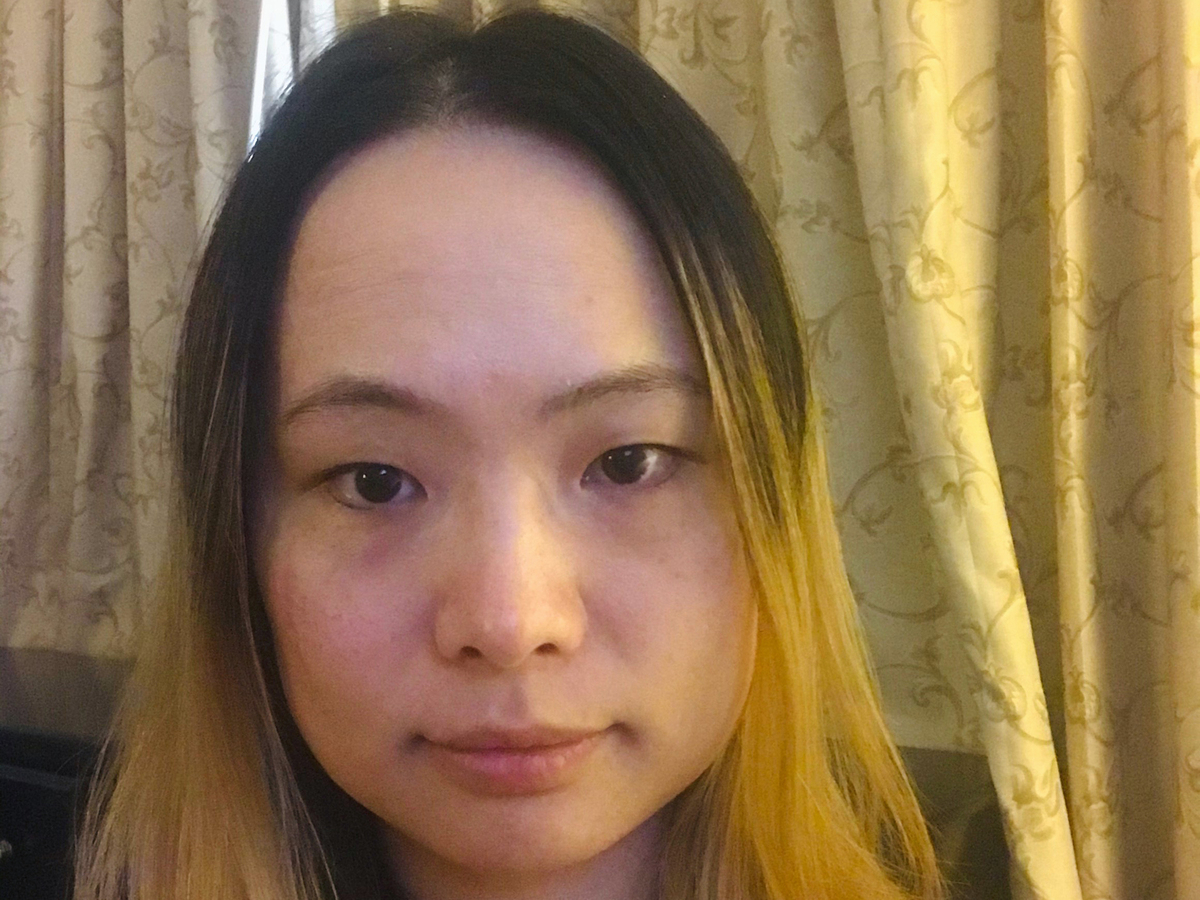 Ningxi Xu is investment manager in Jersey City. She is under quarantine for two weeks in California after returning from Wuhan, China.

But Xu, who is 30 and an investment manager in Jersey City, wishes she could return home to her family. "It's almost like being in prison here," she says. "It's just an unfortunate reality."

People are worried about getting sick, Leonhard says. "People didn't want to get too close. Nobody wants to be close to anybody. And also people get pretty upset if you don't put on your mask properly."

Under this 14-day quarantine, the passengers don't have to wear masks, although they can if they choose, according to Chris Braden, deputy director for the National Center for Emerging and Zoonotic Infectious Diseases at the Centers for Disease Control and Prevention. They are asked to keep a distance from other people — about six feet, he adds.

Now that they're in their quarters, there are getting symptom and temperature checks twice each day, Braden says.

CDC doctors caring for the quarantined evacuees say they are providing any medical treatment they may need, including mental health counseling.

"When anyone comes from a stressful situation where there's intense community-wide transmission of an emerging disease and then they're whisked away and put on a plane and then arrive at a new destination, obviously it's very stressful," says the CDC's Dr. Henry Walke, who's caring for evacuees at the Travis base. "So, yes, we are concerned about the mental health of the residents."

Still, there's a sense of gratitude among the passengers, Leonhard says. They want to concentrate on the positive, and put the experience at the Wuhan airport behind them. 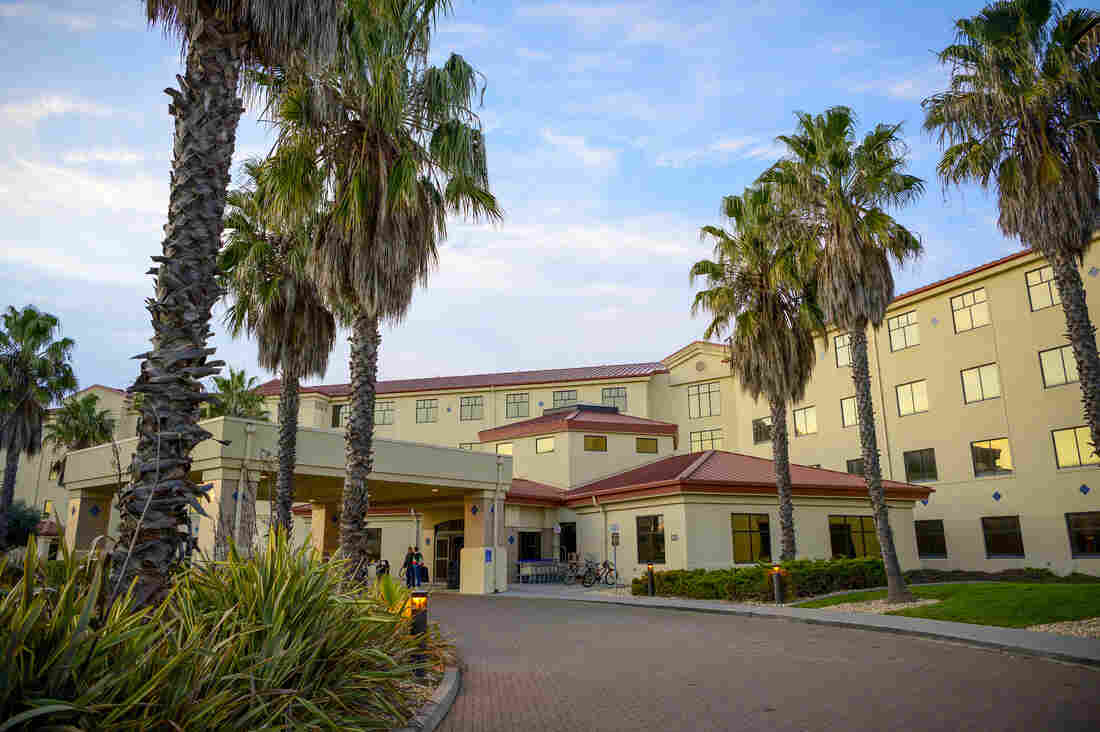 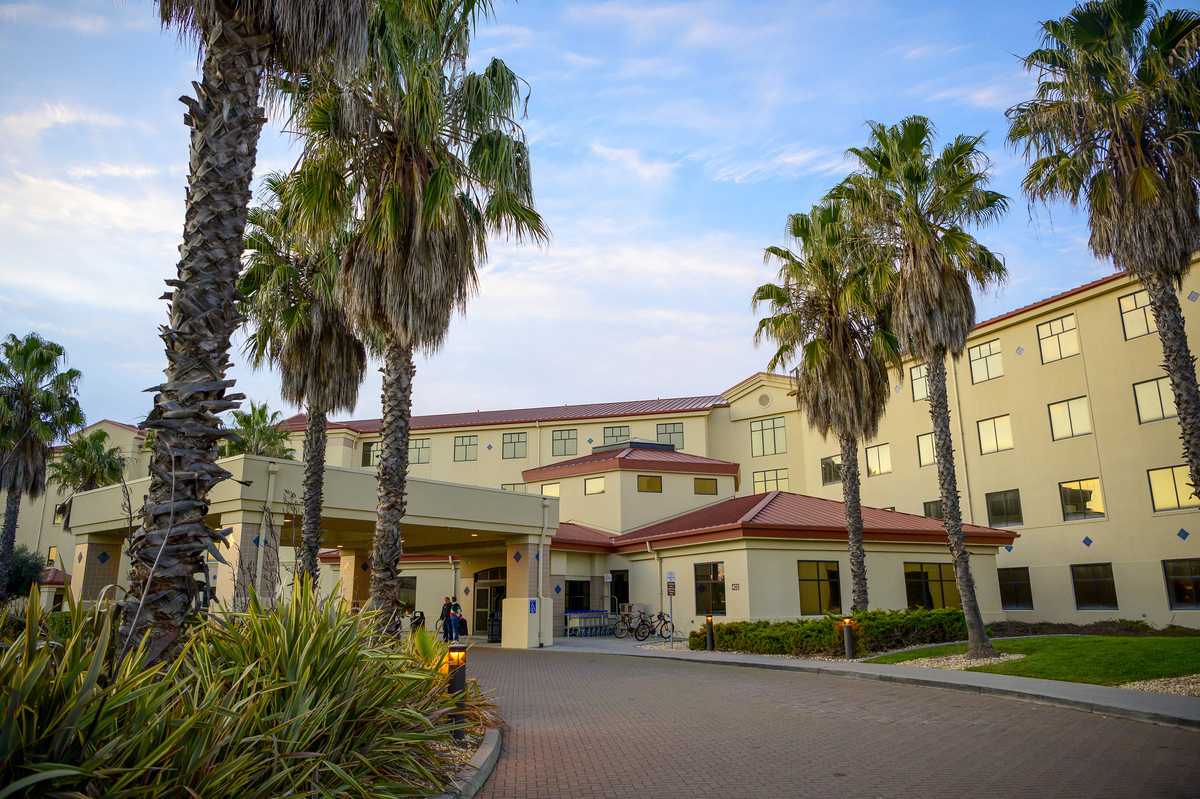 The process of evacuation process took longer than anticipated, Braden says. A total of 345 passengers returned to the United States Wednesday on two flights. Some went to Travis Air Force Base while others landed at Marine Corps Air Station Miramar, near San Diego. Health officials screened the passengers upon arrival, Walke says. This follows a first flight of evacuees that landed last week, bringing the total number of people repatriated to the United States up to 540.

But the process to get home was frustrating, according to two passengers.

Xu had been in Wuhan visiting family for the Lunar New Year holiday. She wasn't sure when she would be allowed to return to the United States, where she has been living for 13 years. She kept calling the State Department and the U.S. embassy, but didn't hear back. "Looking back on it over the past three weeks, it was a progression of confusion, then some despair," she says.

It was chaotic at the airport in China, Leonhard says. Medical professionals clad in protective suits examined passengers and took their temperatures.

People were sitting for hours and hours amid the confusion before they were able to board what seemed like a cargo plane with very few windows, Xu adds.

A team from the CDC met the plane, Walke says, cheering as the passengers finally arrived, and screened them for symptoms in the hangar before explaining their quarantine orders.

People have generally been understanding about the confinement, Braden says. But before the federal quarantine was announced last week, one woman who arrived on an earlier flight from China was "very adamant about leaving."

"This woman was very frustrated and upset and felt that she had to be home," he adds. She was still insistent after a mental health counselor spoke to her. "But we were able to work through that."

Though being in mandatory quarantine is not anyone's first choice, the government's decision to handle the evacuees this way made "perfect sense" to Leonhard, for the sake of public health.

And Leonhard was glad to know that her confinement has an end date, which she learned when she was handed a court order upon landing in the U.S. "I know in 14 days, if everything's okay, it's going to be over," she says.

The chaotic experience in China made her value seeing a transparent process in action, she says. "Sitting in China, I just felt totally helpless," she adds. "I was really just trying to get out because I needed to. It was stressing me out tremendously."