Accessibility links
Michael Pollan On Caffeine Addiction's Upside — And Ugly History : Shots - Health News When Pollan decided to write about caffeine, he gave it up — cold turkey. "I just couldn't focus," he says. "I was irritable. I lost confidence." Caffeine reshapes the brain in surprising ways. 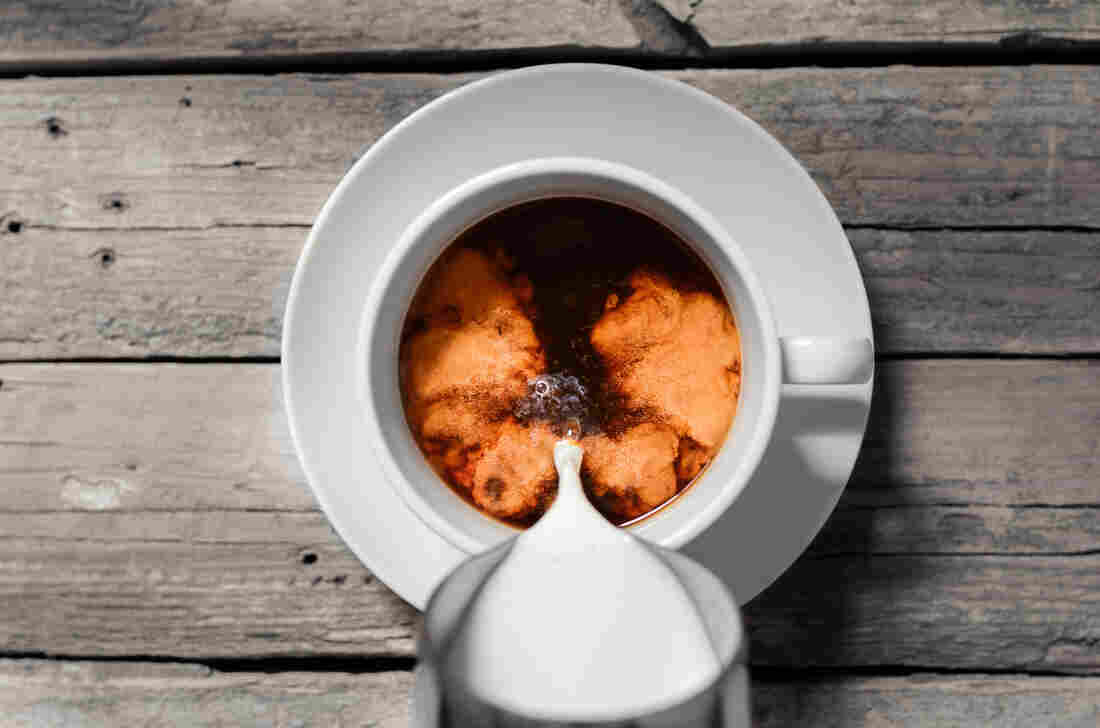 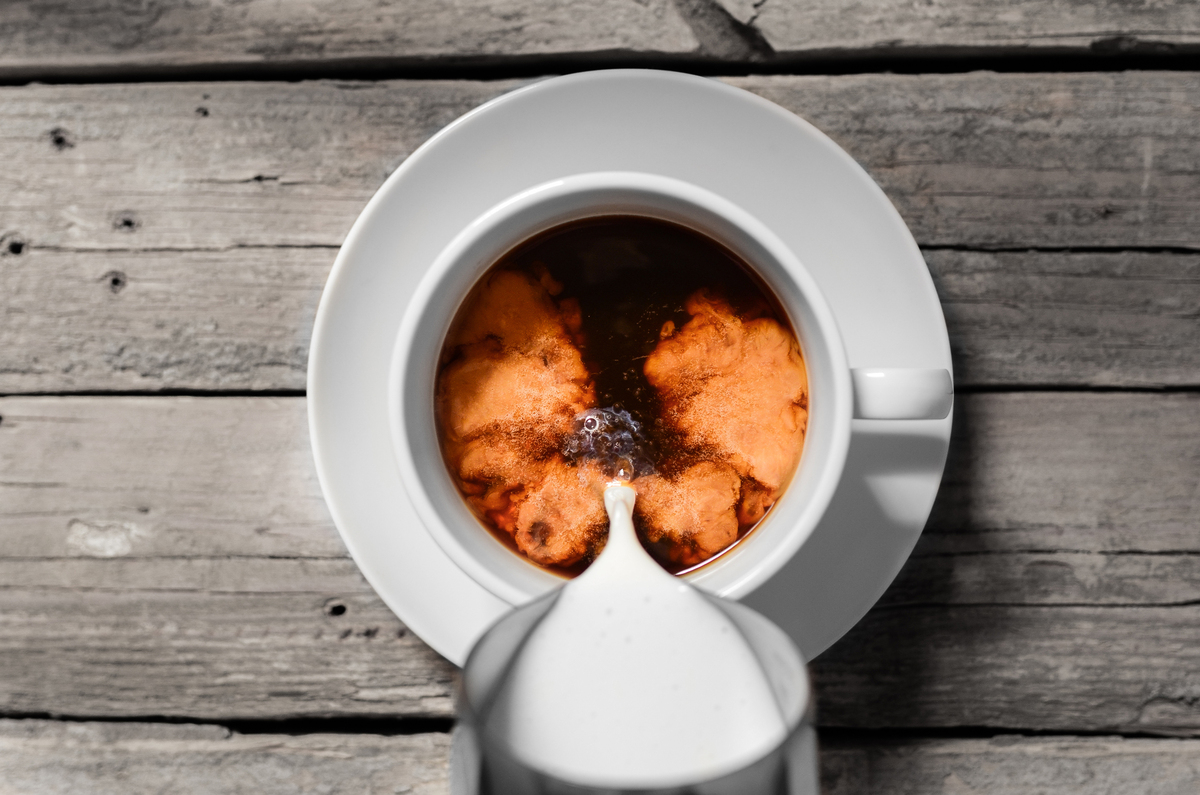 Michael Pollan gave up caffeine entirely for three months while working on his audiobook, Caffeine. "I recommend it," he says of his time without the drug. "I had some great sleeps." But he didn't realize that a temporary "loss of confidence" and lack of focus were withdrawal symptoms.

After wrapping up his book about the potential therapeutic benefits of psychedelic drugs, author Michael Pollan turned his attention to a drug that's hidden "in plain sight" in many people's lives: caffeine.

"Here's a drug we use every day. ... We never think about it as a drug or an addiction, but that's exactly what it is," Pollan says. "I thought, 'Why not explore that relationship?'"

Pollan's new audiobook, Caffeine, explores the science of caffeine addiction and withdrawal — and the broader impact that coffee and tea have had on the modern world. Caffeine, he says, is a powerful drug that alters the brain in surprising ways.

"There are studies that show that people's both mental performance and athletic performance are improved by coffee," he says. "If you have a cup of coffee after you've learned something or read a textbook chapter, you are more likely to test better on it the next day."

It was only when he quit caffeine cold turkey that Pollan fully appreciated the mental and psychological boost his morning cup of coffee had provided: "I just couldn't focus," he says. "I lost confidence. The whole book seemed like a really stupid idea. And loss of confidence is actually listed as one of the symptoms of caffeine withdrawal."

Eventually the withdrawal symptoms subsided. Pollan lasted three months without caffeine — during which time, he says, his quality of sleep improved markedly. But now his research is complete and he has returned to his daily caffeine fix.

"I think the word 'addiction' has a lot of moral baggage attached to it," he says. "As [Johns Hopkins researcher] Roland Griffiths told me, if you have a steady supply of something, you can afford it and it's not interfering with your life, there's nothing wrong with being addicted."

On his experience of giving up caffeine for three months

The thing that really struck me was that I've never had [attention deficit hyperactivity disorder]. I can focus pretty well. I felt like, oh, this is what ADHD is like. I can't keep stuff out of the peripheries. The peripheral information and sense data keeps rushing in and getting in the way. I felt like I was a horse that had taken its blinders off and suddenly I could see too many degrees of circumference. So that was a real problem for working. I really had trouble sitting and writing and staying still.

After a few days, this began to lift. I think anyone who delays having their morning cup of coffee knows what I'm talking about, but there was a kind of a sense of a veil or fog that had descended between me and reality. I was just kind of muzzy headed, and that gradually lifted. But I have to say, even weeks later, I felt like there was a little mental hitch between me and reality. I felt as if this wasn't my natural language — speaking in another language, which never goes that well or that smoothly. ... I got over it eventually, and I wrote a big chunk of the piece without the influence of caffeine. ... But it was an interesting three months. I recommend it actually. I think it's a really interesting exercise.

On how going without caffeine improved his sleep

It was amazing. I was sleeping like a teenager again. I would pop off and just sleep through the night — which I don't do that often. And I had some great sleeps. I guess that was the big compensating benefit of giving up caffeine. ... Caffeine is the enemy of good sleep. ...

How Deep Sleep May Help The Brain Clear Alzheimer's Toxins

It's a problem in ways we don't perceive, because caffeine undermines the quality — not necessarily the quantity, but the quality — of our sleep. And specifically, one very particular kind of sleep, which I'd never heard of before, called "slow wave" or deep sleep. This isn't REM sleep, where you're having dreams, or light sleep. This is a really deep place you go for not that long a part of the night, but it's really important to your mental and physical health. It's where these slow waves start radiating from the front of your brain into the back, and they kind of harmonize all the neurons, get them on the same page. It's where you kind of take memories from short-term working memory and put them in their proper place. It's like cleaning up the desktop on your computer at the end of the day.

Matt Walker, the psychologist who wrote Why We Sleep, thinks that this is very important to our health to have sufficient amounts of deep sleep. As we get older, we have less of it naturally. And coffee or tea cuts into that, even if you stop drinking it, say, at noon, because caffeine has a very long half-life and quarter-life. So, for example, the caffeine you ingest at noon — a quarter of it is still circulating in your bloodstream at midnight. It's still around. And this is the subtle and, perhaps, insidious effect it's having on you.

On how caffeine withdrawal works

It's beginning when you wake up. I mean, you haven't had coffee or tea since sometime the day before. ... All those people who tell you, "I'm not civil" [or] "I'm not fit for human conversation until I have a cup of coffee" — they're beginning to go through that withdrawal. They're starting to feel a little off — that muzziness is coming in. Maybe they have a headache. Maybe they're a little irritable. And then they have that cup of coffee, and the pleasure they're getting from it, I learned, is not simply the lift, the euphoric lift of the drug. It's the suppression of the symptoms of withdrawal. We go through that cycle.

One of the things you learn when you take a caffeine fast, as I did, is that the experience of caffeine is very different to a caffeine virgin or a restored caffeine virgin, as I was, than it is to someone who's addicted. Those people [who are addicted] are getting a little bit of lift, but mostly what they're getting is the relief from these symptoms that are about to come down on them. And that feels pretty good. You're back to baseline. But when you're off for a few months, man, it's something else. It's a very powerful drug experience. And I was not prepared for it at all.

On how caffeine keeps us alert

We have a neurotransmitter called adenosine. ... Over the course of the day, levels of it rise, and its job is to gradually make us tired — create what's called sleep pressure. So, eventually, we turn out the lights and go to sleep, [and] there is a receptor that the adenosine fits into. And, as it turns out, caffeine fits into the same receptor — it gets there before the adenosine has a chance to. So it essentially blocks the action of that neurotransmitter — you never get the signal that you're tired.

Eventually, though, the adenosine — it's not like it goes away. It keeps building up the level in your bloodstream, keeps building up, so that when the caffeine is finally metabolized and the receptors are available again — voom! You get hit by a flood of adenosine, and you get really tired.

And what would you do then? Well, you'd have another cup of coffee and start the cycle all over again. ... That's what keeps us awake. That's the alertness of caffeine. But it does also act on some other network, such as the dopamine network, and that's part of what gives us the euphoria.

Caffeine really helps capitalism conquer the frontier of night. ... To break those circadian rhythms is a huge deal.

On how caffeine helped capitalism

We have these circadian rhythms that organize and govern our lives — and they're hard to break. And I don't know that you could ever have had a night shift or even a late shift before you had caffeine. Caffeine really helps capitalism conquer the frontier of night. And that's why it was so important to the Industrial Revolution, where you had these expensive machines you wanted to keep running all night and you moved to two and three shifts. Did people work at night before that? Not very much. That's why I do think the impact on the modern world has been profound and that this has had a huge effect on our civilization and on ourselves. To break those circadian rhythms is a huge deal.

How coffee and tea historically relied on slave labor

There's a really ugly history behind both of them. [On] the early coffee plantations in Brazil, all the workers were slaves. But even later, when you have post-slavery Central America, these were brutal places to work. The thing about growing coffee and tea is you need a lot of labor, because the shrubs have to be pruned. I went coffee picking in Colombia, and it's really hard work. It's kind of a spiky plant, and it grows on such a steep hillside. You can't get your footing. ...

It's a very dark history. And like a lot of things, we're participating in these commodity chains, and we have no idea what's behind it. I mean, who among us has seen a coffee plant or a tea plant, except in photography? But at the other end of those food chains, it has often been quite a bit of brutality. And, of course, coffee and tea drove demand for sugar, and sugar was at the very heart of the slave trade in the Caribbean.

Capitalism may be killing the golden goose as climate change undermines coffee production.

On how climate change could affect coffee production

It's a very demanding plant, and it's very picky. It has to have exactly the right altitude, water ... all this kind of stuff, which is concerning now, because coffee faces a tremendous threat from climate change. There is a narrow band of conditions that make coffee happy. And the estimates now [from] the climate scientists — and this will be alarming to the fellow addicts out there — is that 50% of the coffee-growing regions will not be able to support the coffee plant by 2050. So capitalism may be killing the golden goose as climate change undermines coffee production. ... We may look back and say we lived in this golden age of good coffee that lasted from 1966 to 2050 — and then it'll be downhill from there.

Sam Briger and Thea Chaloner produced and edited the audio of this interview. Bridget Bentz and Molly Seavy-Nesper adapted it for the Web.

An earlier version of this story misspelled Roland Griffiths' last name as Griffeth.