Accessibility links
New Emojis Include Rocks And Flies: Scientists Have Mixed Feelings : Shots - Health News The latest batch of new emojis is coming soon and it contains some wins for science-lovers. But scientists have mixed feelings about some of the new images from nature. 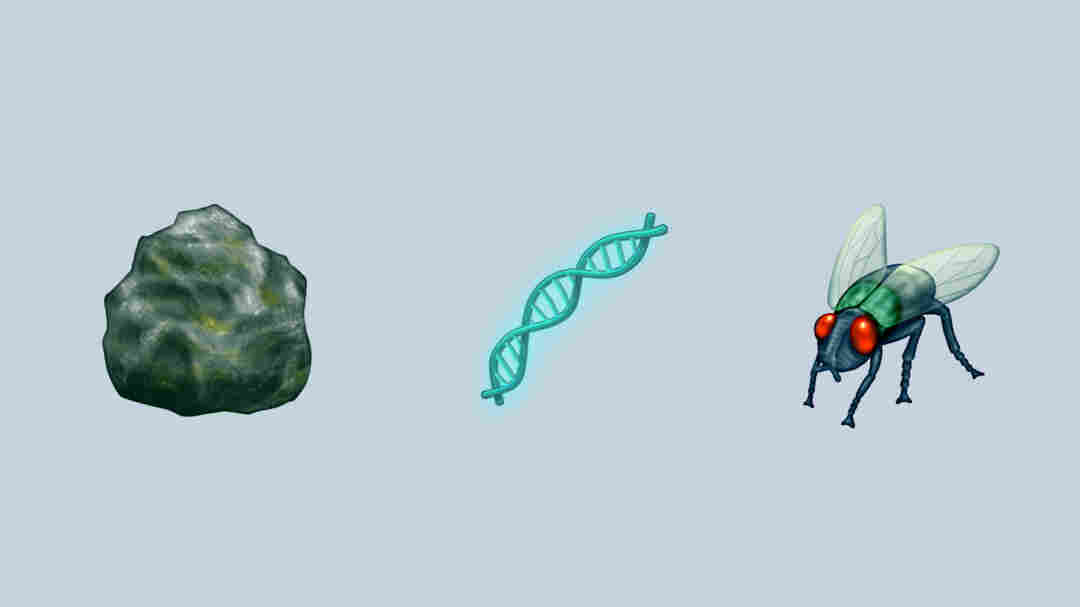 The scientific community has lots of feelings about emoji representation. Geologists are excited about the new rock emoji, for example, but reviews are mixed when it comes to the fly. Emojipedia hide caption 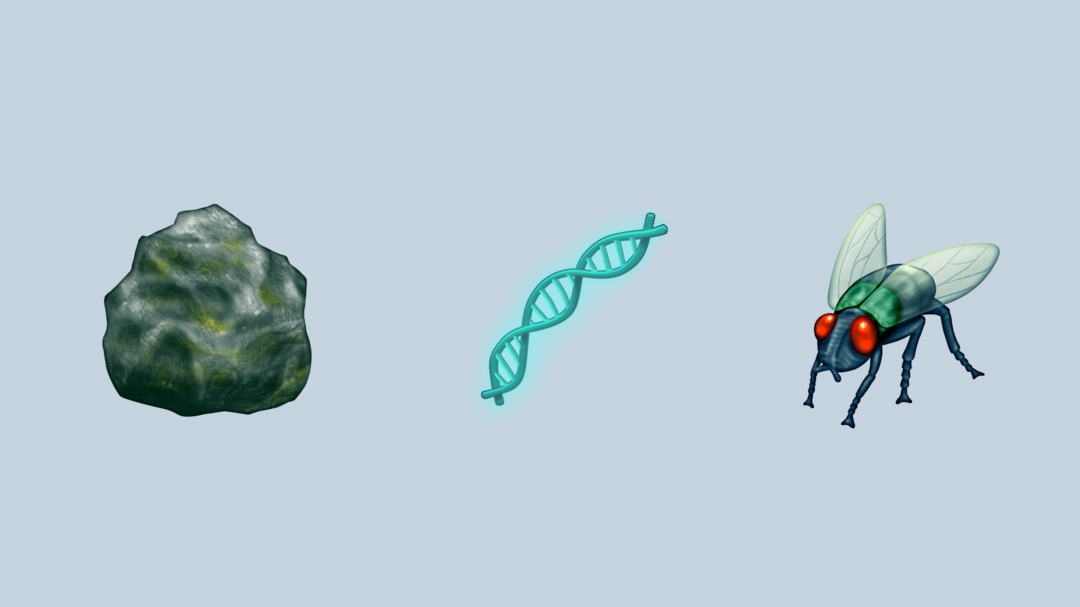 The scientific community has lots of feelings about emoji representation. Geologists are excited about the new rock emoji, for example, but reviews are mixed when it comes to the fly.

Scientists can get very excited about what they study, and that means they can be pretty jazzed when what they study gets turned into one of the official emojis of the world and enters our shared visual language.

But sometimes that enthusiasm is tempered by more complex feelings, which is the case with some of the latest emojis that are about to hit our smartphones. 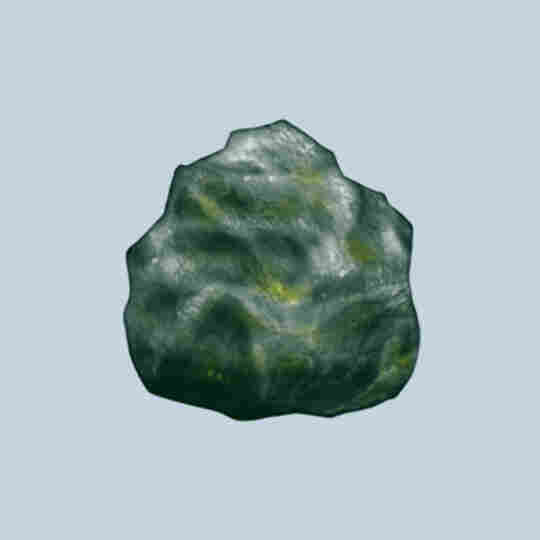 Some discerning rock lovers thought this rock emoji was likely based on Serpentinite. Emojipedia hide caption

"I was aware of the mountain emoji, which is quite helpful for geologists, and there's a hammer and a pick that I use quite a lot," says Stacy Phillips, a geologist at The Open University in the United Kingdom.

Then she happened to look through the list of emojis recently approved by the Unicode Consortium, which sets the world standard for text and emojis on computers and mobile devices. She saw that a "rock" had made the cut, and thought to herself, "Yes!"

But then she thought, "Wait, what type of rock is that?"

To her, the rock icon in Emojipedia looked like a cabbage. "It was just kind of dark green, a little wrinkly, a little bumpy," she says, "which I guess is what a rock looks like to most people."

Geologists have been pondering this emoji and discussing it on Twitter. "One of the most popular suggestions that I got was that it was a rock called serpentinite," says Phillips.

Or, maybe it's a rock covered in green moss or lichen. It doesn't really matter, because the rock will look different on every device or platform. Technology companies like Apple and Google create their own rendering of each emoji character approved by the consortium.

Geologists aren't the only scientists to get an important new emoji. The list of soon-to-be-released emojis also includes a fly.

The fruit fly has long been a mainstay of genetics research and is one of the most studied creatures on the planet.

"I'm happy that there's a fly, now, and now I have to change my Twitter bio to reflect that," says Richard Meisel, a biologist at the University of Houston, whose lab uses fruit flies and whose Twitter bio says he is "waiting for a fly emoji."

He recalls that, a couple years ago, he went searching for a fly emoji. The only choices that popped up were a mosquito or a butterfly. It made him a little sad.

"You look at all the other insects or animals that are available with emojis and you see that there are emojis for them and not for yours," says Meisel. "Obviously, in the grand scheme of things, it's a trivial emotional blow, but there's still an emotional component to it." 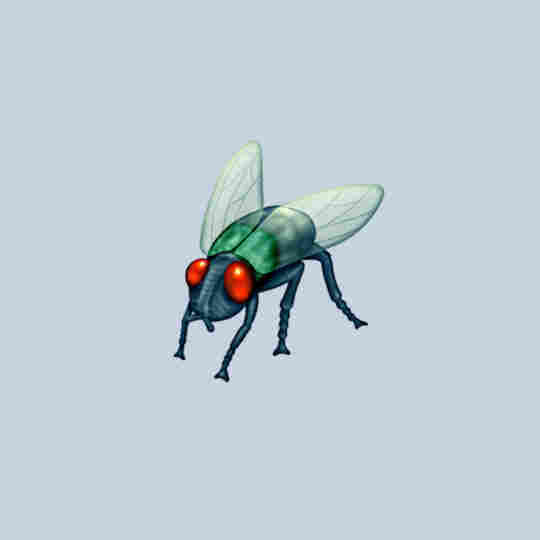 Scientists on Twitter commented that this emoji looked too much like the much-hated house fly rather than the numerous other "lovely" flies they study. Emojipedia hide caption

Still, some say the long-awaited fly emoji is a disappointment.

Mark Peifer, a biologist at the University of North Carolina, Chapel Hill, is currently the president of a research association called the Fly Board. He surveyed fruit fly researchers and found that more than half of them thought the initial rendering of a fly emoji wasn't cute enough.

After all, he says, fruit flies are small and adorable. The fly emoji he's seen looked to him like a housefly, which he thinks are big and ugly, a pest associated with garbage and filth.

Anything that looks like that should be called the "housefly" emoji, so as not to "tarnish the reputation of tens of thousands of other flies with the bad associations people have with houseflies and fly swatters and so on," he says.

I am a fruit fly scientist or appreciator and I think the new "fly" emoji is:

"I mean, really? It's just not right," says Peifer. "We don't want our lovely Drosophila associated with those nasty houseflies."

When he was looking at the other insect emojis, to see how the fly would fit in, he noted scientific inaccuracies. "Honeybees have four wings," Peifer points out, but some honeybee emojis appear to have only two.

In the past, biologically-implausible emojis have been fixed.

A few years ago, for example, Apple created a squid emoji that had a key part of its anatomy--the siphon used for jet propulsion--in the wrong place, sitting between its eyes and looking disturbingly like a nose.

"I saw the problem immediately, but I was honestly just so thrilled to bits to have a squid emoji at all that I didn't complain," says Sarah McAnulty, a squid biologist at the University of Connecticut. 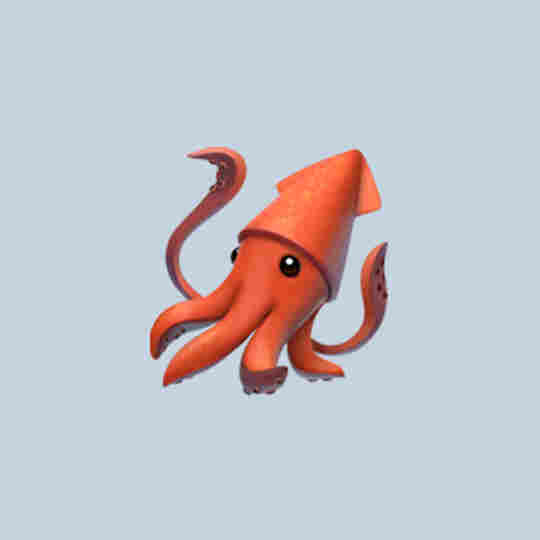 This updated version of Apple's squid emoji no longer has the misplaced siphon it originally had. Apple hide caption

The Monterey Bay Aquarium tweeted about the error, however, and the issue got picked up by the press. In the next rollout of emojis, the trouble was fixed.

"The squid's siphon was no longer visible on the top of the squid," says McAnulty. "So, that's a win for us!"

It was a rare win for invertebrates, given that emojis are heavily biased towards mammals.

Kyle David, a biologist at Auburn University, says he checks every batch of new emojis "to see, you know, are we getting any cool new marine critters or are we just getting our fourth bear, or whatever."

Big groups from the tree of life are missing, he says, writing on Twitter that "Mammal emojis are so over-represented we're now doing extinct species and color morphs before a single representative from six of the ten largest animal phyla."

The currently available emojis include no creatures from the large groups of species that include jellyfish, corals, starfish, and sea urchins, he says. The entire fungi kingdom is represented by one mushroom emoji.

And then there is the emoji called "microbe," the only available emoji to represent all microbes—like archaea, bacteria, and viruses—unless someone wants to resort to "petri dish." 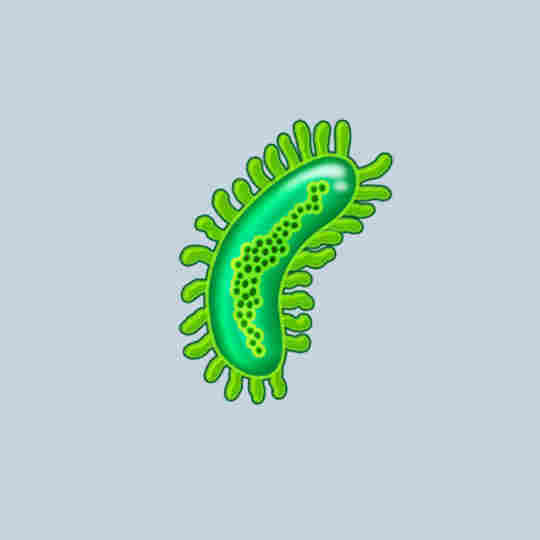 The new microbe emoji doesn't appease virologists' desire for their own emoji. It "just doesn't look like any of the viruses that any of us work on," says Kristen Bernard, a virologist at the University of Wisconsin in Madison. Emojipedia hide caption

Kristen Bernard, a virologist at the University of Wisconsin in Madison, says people in her field had been hoping for a virus emoji.

"I will say we were all a little bit disappointed," she recalls, noting that the microbe emoji "just doesn't look like any of the viruses that any of us work on."

If she was designing a virus emoji, she'd give it an icosahedral structure, which has twenty triangular sides. "Most virologists," she explains, "if we saw an icosahedral-type shape, we would go, 'Ah, it's a virus!'"

She, or anyone else, could actually propose an emoji like that, because the Unicode Consortium takes suggestions from the public.

Jessica Morrison, a product manager at Chemical & Engineering News, was part of a group that pitched a whole set of science emojis back in 2016. A bunch of them were accepted, such as DNA, a test tube, and a lab coat. 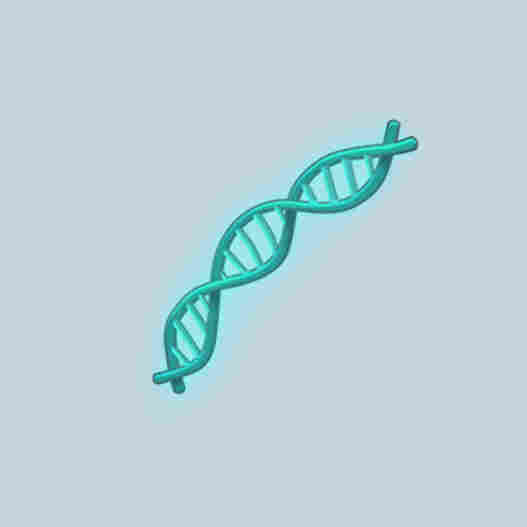 DNA, with its famous double helix, was approved in 2016 along with a several other science-oriented emojis. Emojipedia hide caption

One of their proposals was the rock emoji. It was not accepted back then, which shows how this process can take time. "I was a geologist in undergrad, that's why I wanted a rock," says Morrison, who has called the emojis she worked on her "greatest contribution to science."

"If there's any emoji you want, propose it. That's all you have to do," says Morrison.

That same message is echoed by Melissa Thermidor, who works for NHS Blood and Transplant, which oversees blood and organ donations in the United Kingdom. When she was trying to encourage blood donation, she noticed that the only available blood-related emoji was a syringe, which looked a bit scary.

"I googled 'how does an emoji become an emoji?' and started going down this rabbit hole," says Thermidor, who worked to win approval for a blood drop emoji, as well as the band-aid and stethoscope emojis. 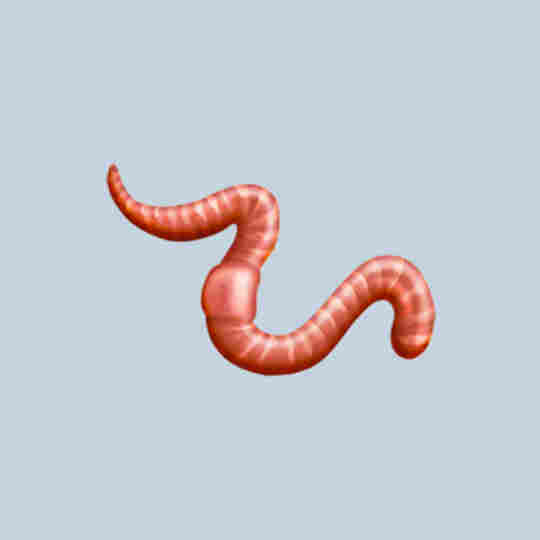 Worm enthusiasts are excited they'll soon have their own emoji. Emojipedia hide caption

Most recently her proposals for an anatomical heart and lungs were accepted. She also successfully pitched the new worm emoji.

"My three-year-old absolutely loves wiggly worms," she says, "it was just, I guess, a nice little homage to her, because she loves worms, and I thought, why not?"

That means all worm researchers will no longer have to resort to the bug; they'll soon have their own worm emoji, and whatever complex feelings come along with it.