Accessibility links
A Glimpse Inside The U.S. Coronavirus Quarantine : Shots - Health News A New Orleans law professor and a New Jersey financial analyst are waiting for their stints in the first federal quarantine in a half-century to end. Here's glimpse of their daily lives. 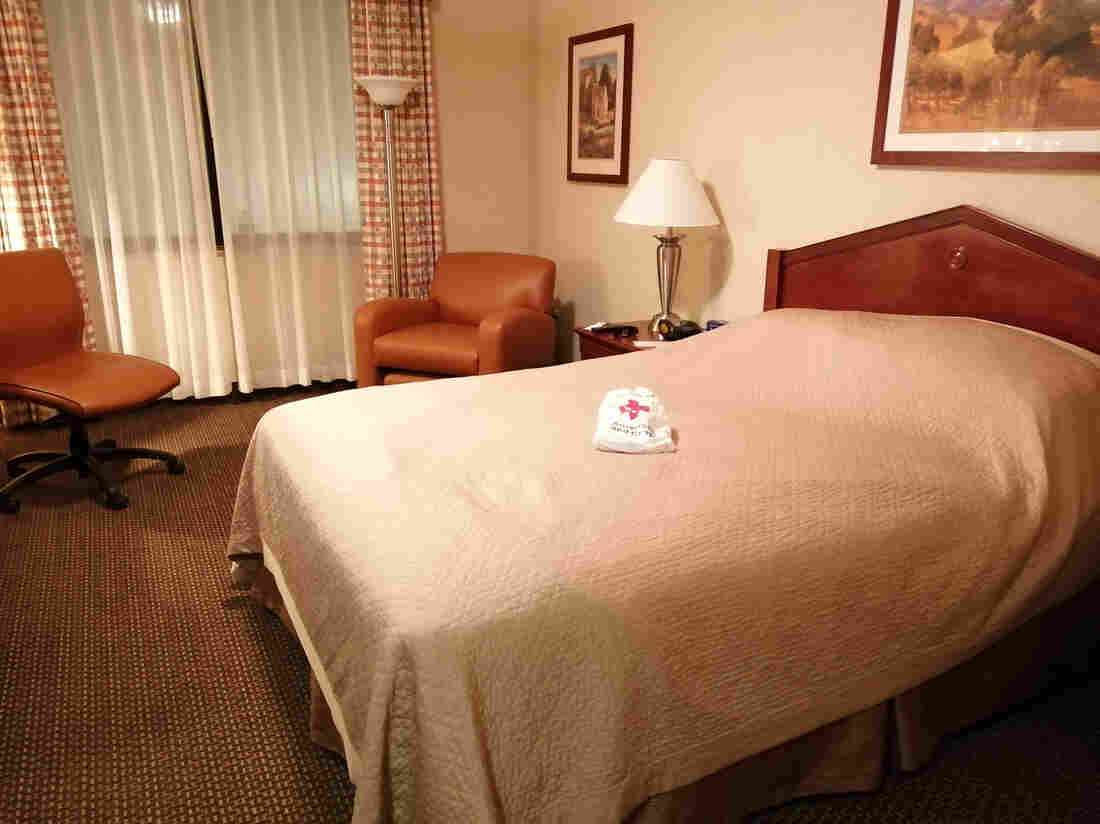 When Chunlin Leonhard got to her room at Travis Airforce Base, she found a welcome bag on the bed from the American Red Cross and an information sheet from the Administration for Children and Families. Chunlin Leonhard hide caption

Chunlin Leonhard spends most of her time alone in her room at a hotel at the Travis Air Force Base in California, anxiously reading the latest news about the coronavirus outbreak in China.

"I'm doing about as well as can be hoped for under the circumstances," Leonhard, 55, a New Orleans law professor, says during an interview over Skype. 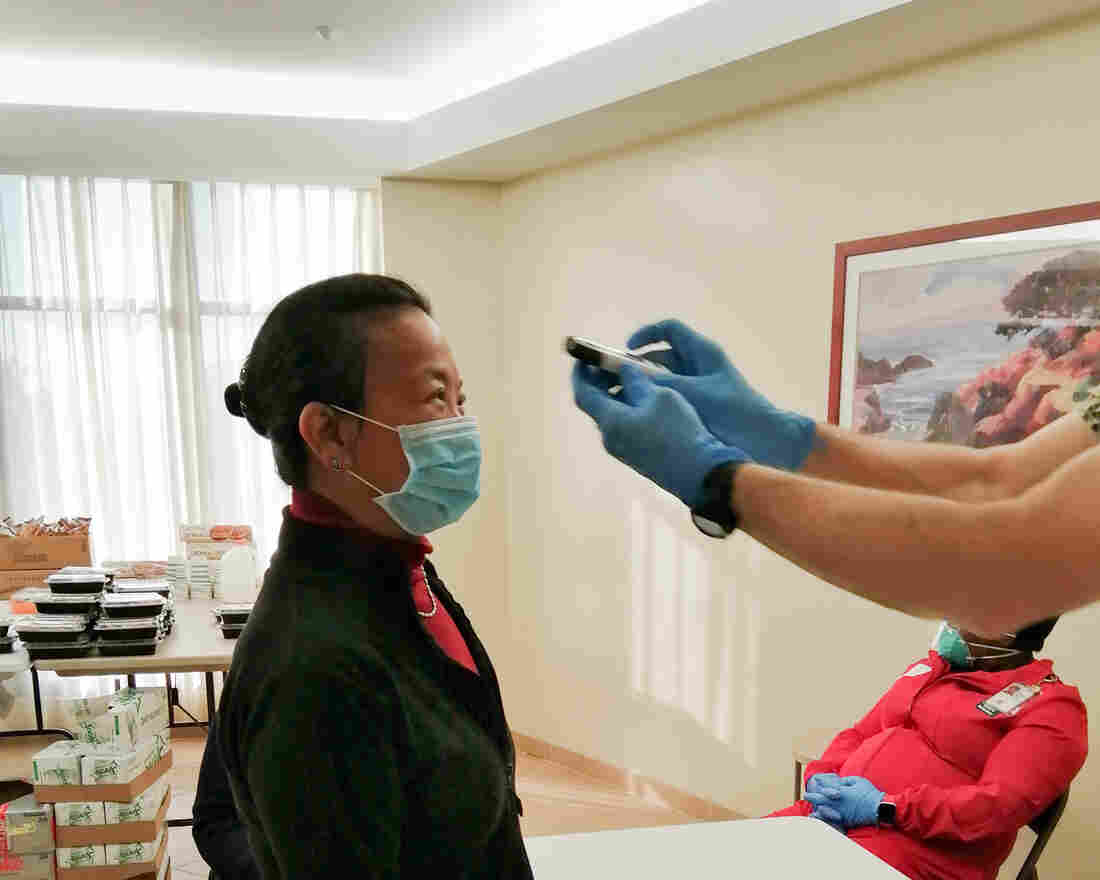 It gave me comfort to know that my mandatory confinement was not a random decision ... I am now back in an environment where my individual rights are protected.

Leonhard is one of more than 800 Americans who have been evacuated from the epicenter of the outbreak in China and put under two-week quarantines at U.S. military bases in the nation's first federal quarantine in a half-century.

"I'm probably a little stressed — still trying to work through all of this," says Leonhard, who is about halfway through her quarantine. "And I think I can feel that my blood pressure is probably a little high for me."

"This kind of events do affect me physically as well as emotionally," she says. "I think I'm kind of frazzled about it. So I can't settle down that well."

About 500 miles away at the Marine Corps Air Station Miramar in San Diego, Ningxi Xu, a financial analyst from Jersey City, N.J., passes most of her time by herself in her base hotel room. 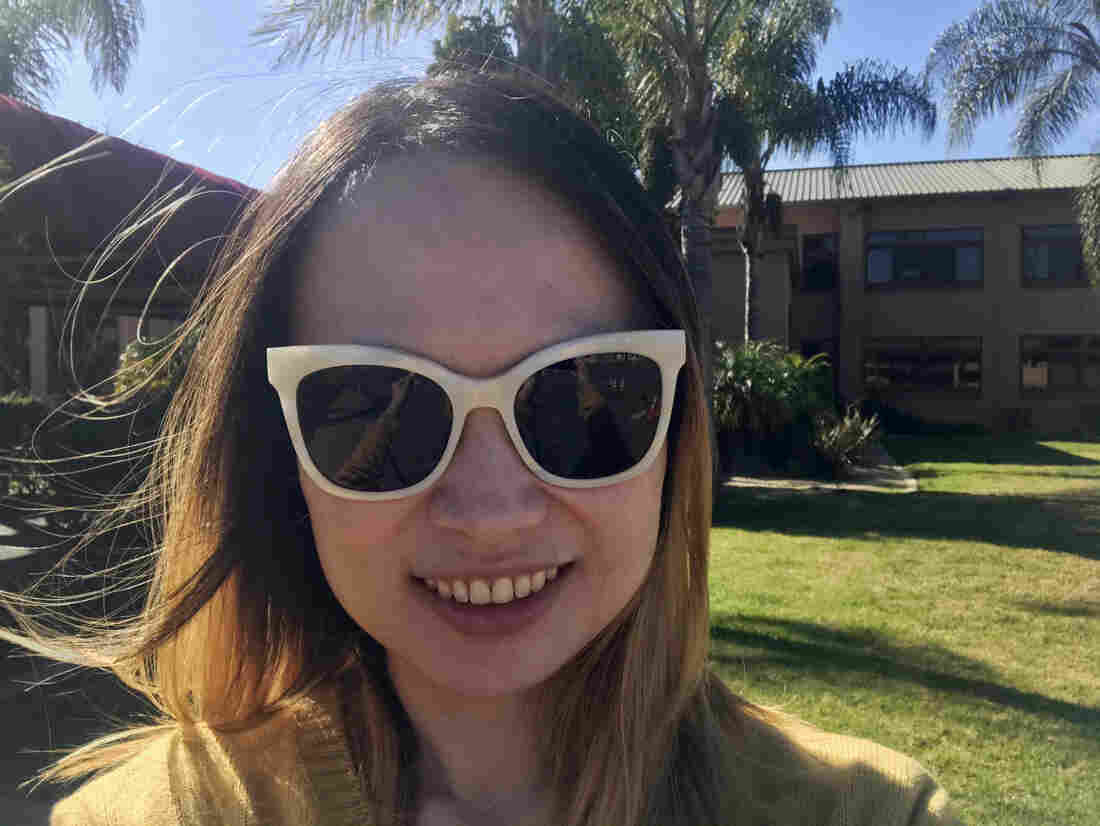 I'm looking forward to hopefully leaving on time next Tuesday. I miss the normal things I was doing before this happened that I took for granted.

"I'm still kind of in disbelief that all of this is happening," says Xu, 30, who is also about midway through her quarantine. "It's very, very surreal."

Both women, who began their quarantines last week after harrowing experiences in China, praise the U.S. officials and other workers running the quarantines.

"I really feel like the government has set up a great team to deal with the situation here," Leonhard says.

And both women say they understand the quarantines are necessary.

"I am not thrilled about it," says Leonhard. "But I do think because it's a new virus nobody one knows exactly where it's going to go. So caution is necessary."

She noted that when she first arrived on the base she received her quarantine order, "with a 6-page long supporting affidavit." She was relieved, she wrote in a diary entry, to be "back in an environment where my individual rights are protected."

The base hotels are surrounded by chain-link fences and guarded by federal marshals.

On day one, the evacuees at Travis formed a chat group on social media, where they could connect over their shared experience. The food, it turns out, was a big topic of discussion. "Some people complained ... about onion soup being too salty and rice was half cooked. One joked that he could now go on a diet and lose weight free of charge," she wrote in her diary. 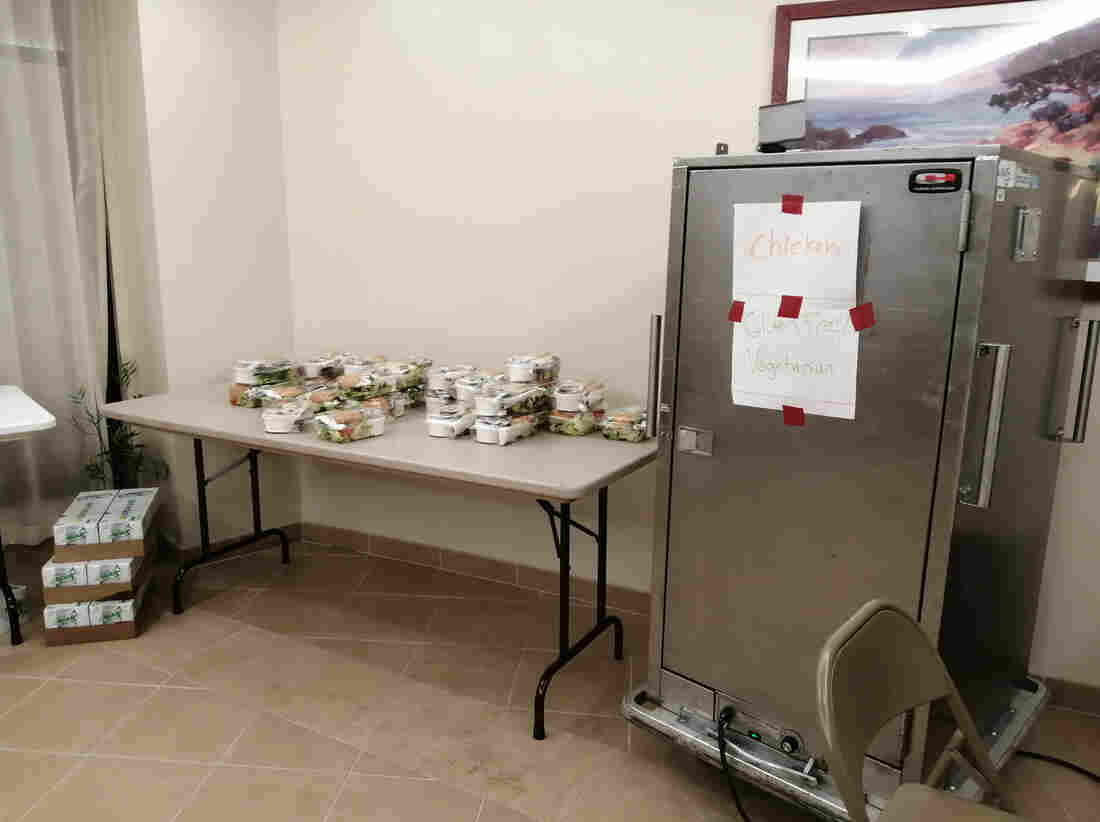 Daily meals are provided on both bases for the evacuees. After some complaints about the cooking, the quality improved. Chunlin Leonhard hide caption

Among the [airforce base chat] group, there was a collective groan – turkey sandwich again! One declared that she was just going to skip dinner and starve. (diary excerpt)

Both quarantine facilities arranged for better food when evacuees complained, the women say. Officials also figured out how to get Amazon deliveries.

Everyone has been instructed to stay six feet away from each other to minimize their chances of transmitting the virus. Most people wear masks even though that's not required.

"I'm spending probably all the time in the room by myself except when I go out for my medical checkups and I go out for a walk by myself late at night outside," Leonhard says.

In addition to following the news, Leonhard keeps busy mostly by Skyping with her husband and two daughters.

At Travis, the base organized games outside for children among the evacuees, and volley ball and Tai Chi for adults, Leonhard says.

But she's really looking forward to resuming her life.

"There's an end in sight. And so far so good," Leonhard says. "And in light of everything, I'm good."

Xu also spends most of her time online, trying to work, emailing with friends and keeping up with the news. She talks regularly with friends, family and her boyfriend in New Jersey.

But "being here by myself for 14 days with people I don't know, you know, I definitely feel trapped here," she says. 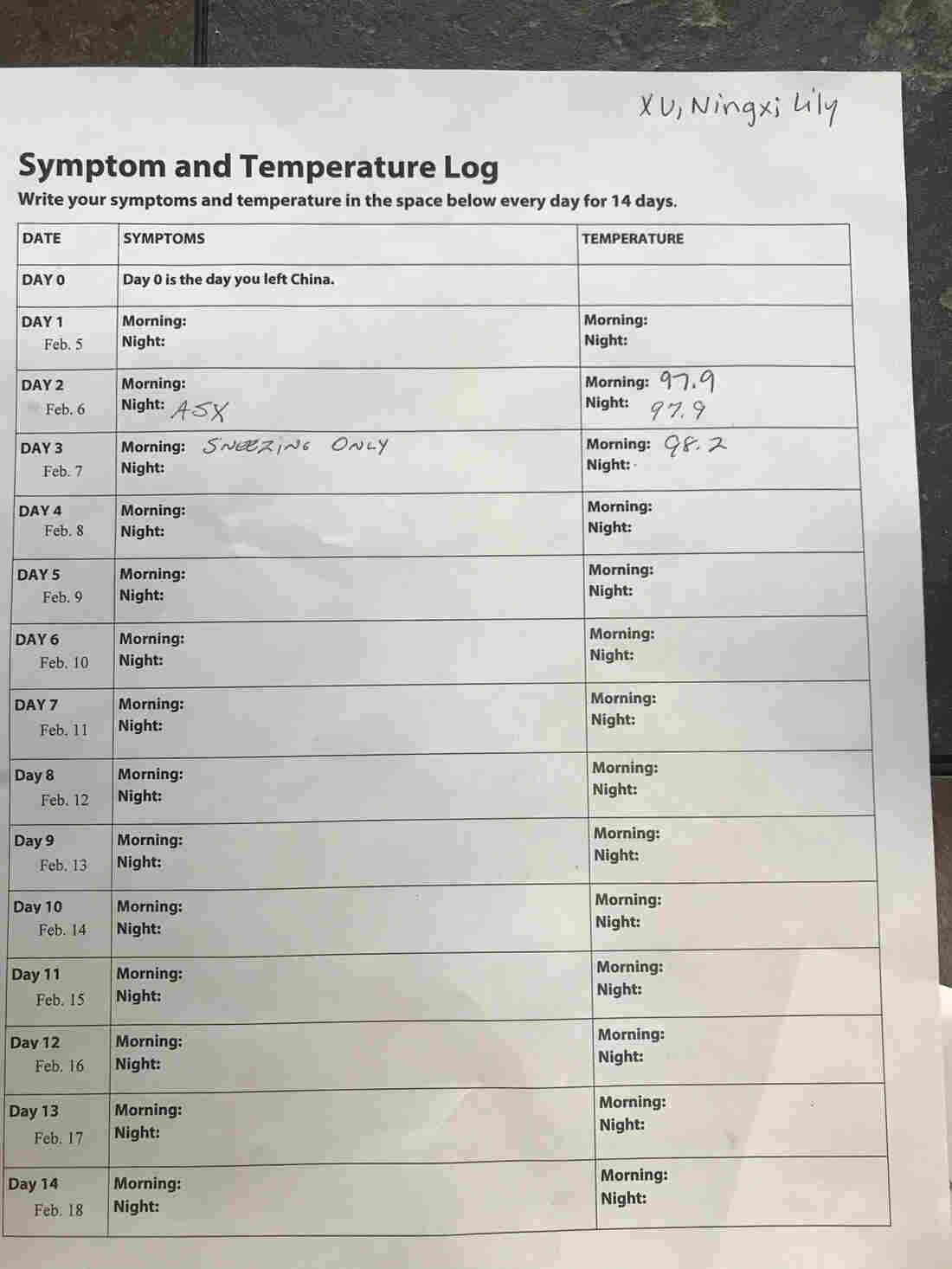 Ningxi Xu's log of her daily temperature checks. On day three, she felt a little sneezy and worried she might be infected. Luckily the symptoms soon subsided. Ningxi Xu hide caption

"I still have some concern about not getting too close to others, just in case. I want to minimize my risk of contagion," Xu says. "So, it's definitely a weird place to be in."

Xu says she got a scare a few days after she arrived when she woke up sneezing and coughing.

"Almost immediately, I started imagining the worst," Xu says. "When would I be able to go home if I do you know get taken to the hospital? Maybe not until March? And some scary thoughts."

It turned out to be a false alarm. 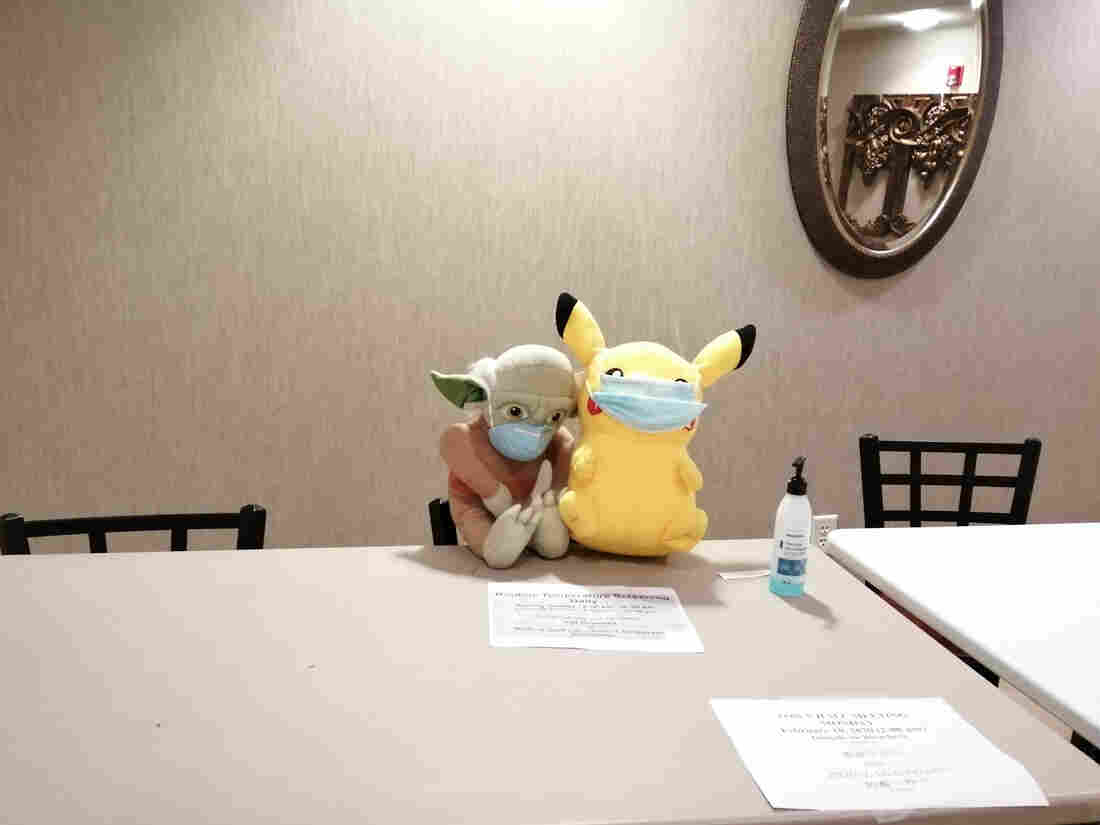 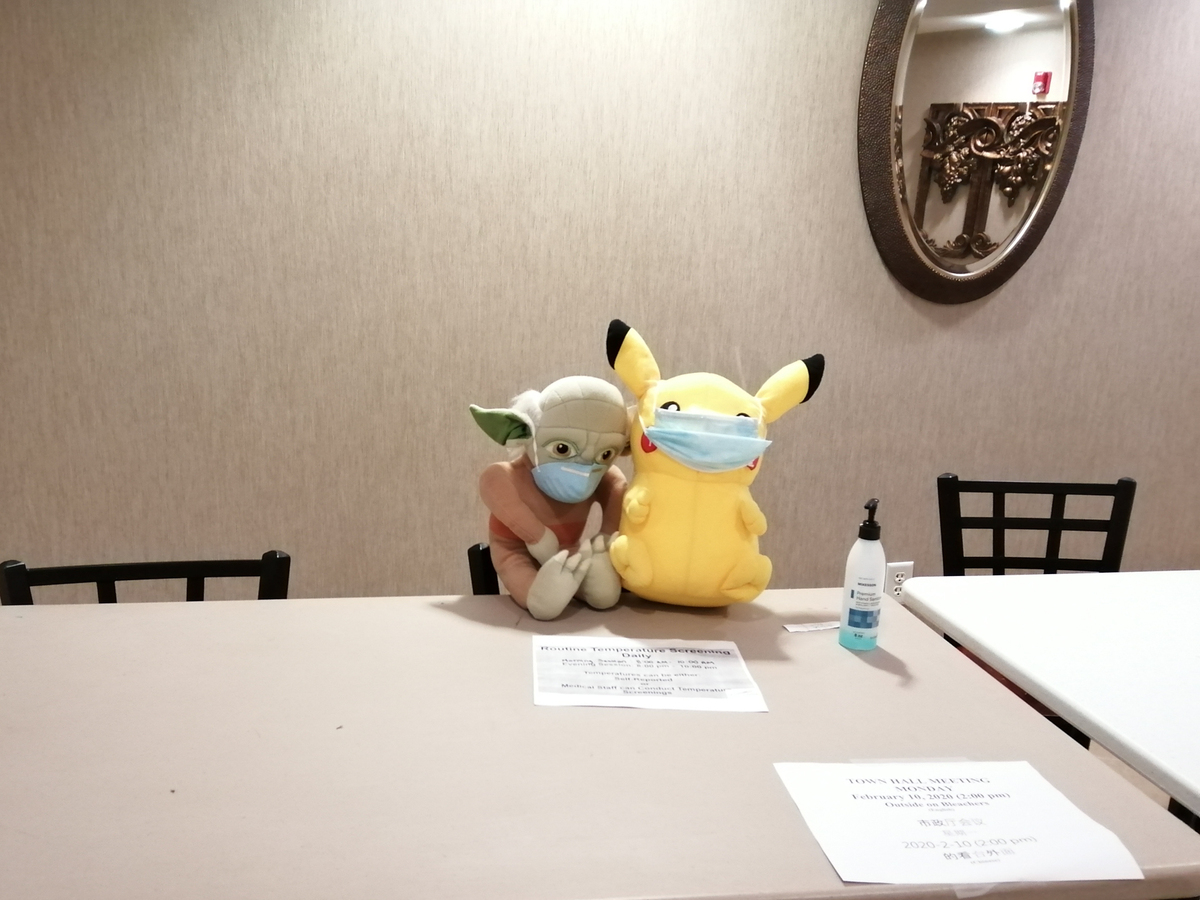 A masked Yoda and Pikachu guard a table with signs notifying evacuees of times for daily temperature checks.

But everyone got a scare a few days late when a testing mix-up accidentally sent a woman back to the base from the hospital even though she was positive for the virus.

"I was startled to hear that someone had tested positive. And they were sent back to the base, you know, pretty much living amongst us," Xu says. "A little alarming, to say the least."

Xu and other evacuees tried to figure out if they sat near the woman on the plane from China or had contact with her at the base, she says.

"Of course we were concerned whether or not this would impact our departure date, especially whether it would re-set the 14-day clock," Xu says.

But everyone was relieved to find out that wouldn't mean the quarantine would have to be extended for most of them. Only three people who rode back to the base with the woman in a van may have to stay longer, officials say.

So Xi is counting the nights until she hopefully goes home next week too.

"I'm looking forward to hopefully leaving on time next Tuesday," she says. "I miss the normal things I was doing before this happened that I took for granted."