Accessibility links
Coronavirus Update: 346 Americans Emerge From Quarantine At California Military Bases : Shots - Health News "It is important to know that these people being released from quarantine pose no health risk to the surrounding community," a CDC press officer said in a statement to NPR. 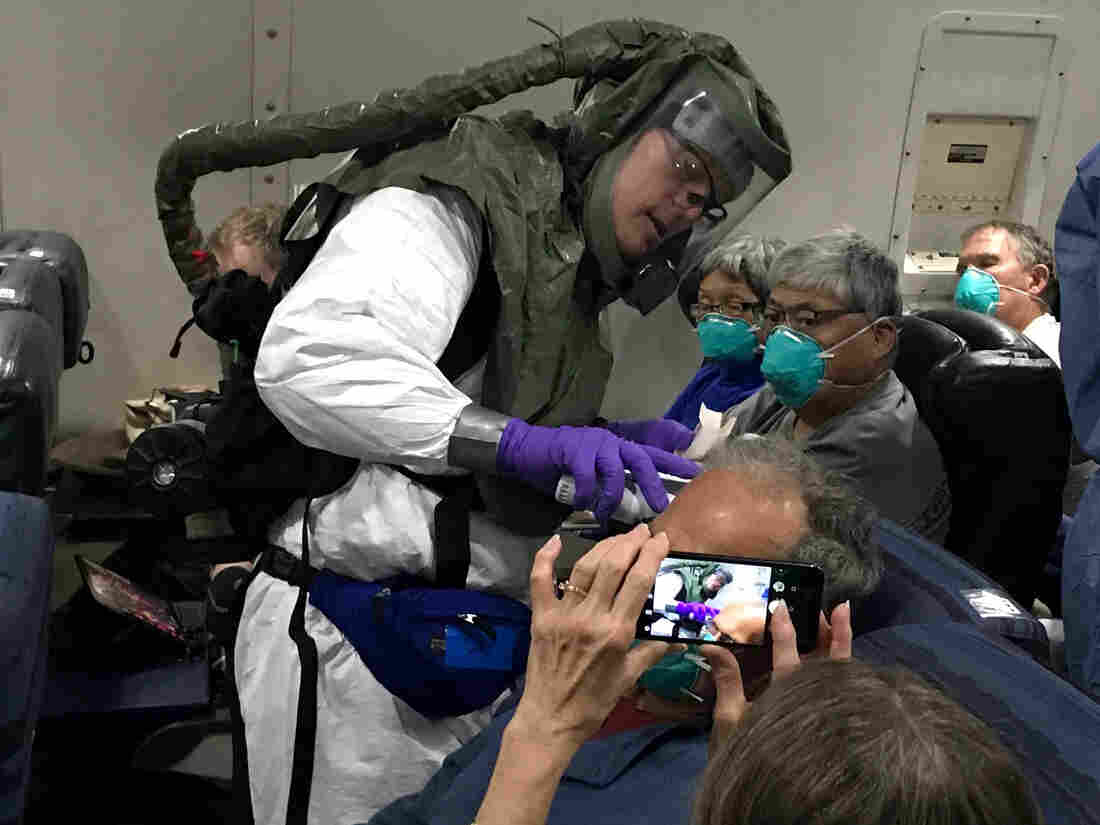 Checking for signs of COVID-19, a medical worker in a protective suit checks the temperatures of people who were on board the Diamond Princess cruise ship as they fly on a chartered evacuation plane from Japan to Lackland Air Force Base in Texas. Philip and Gay Courter/via Reuters hide caption 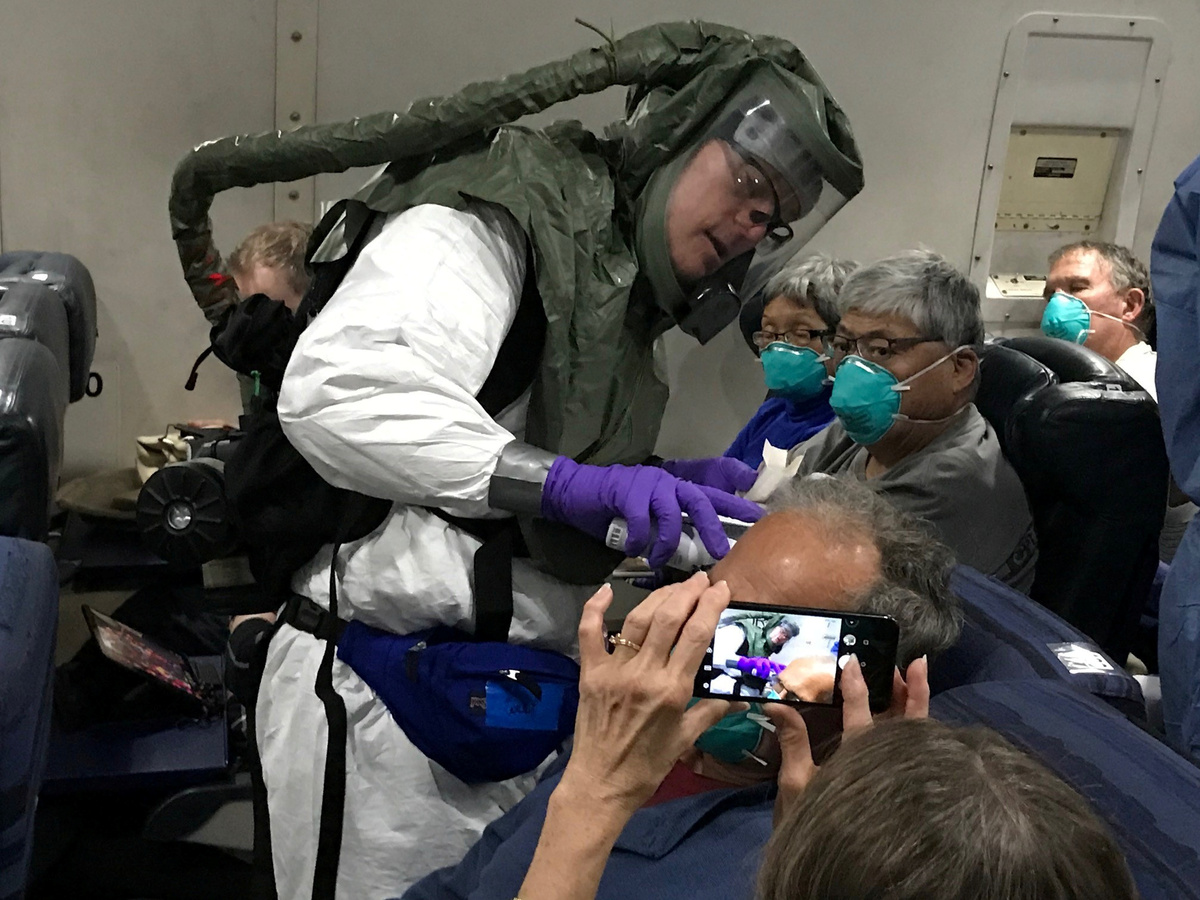 Checking for signs of COVID-19, a medical worker in a protective suit checks the temperatures of people who were on board the Diamond Princess cruise ship as they fly on a chartered evacuation plane from Japan to Lackland Air Force Base in Texas.

Some 346 Americans who were evacuated from Wuhan, China, amid the deadly coronavirus outbreak emerged from their quarantine at two military bases in California on Tuesday, U.S. officials say.

"One person from the MCAS Miramar group who is confirmed to have COVID-19 remains under care at a local hospital," the Centers for Disease Control and Prevention said in a statement sent to NPR.

All of the other U.S. evacuees "have been medically cleared and CDC officials have lifted their quarantine orders," said Jason McDonald, a CDC press officer.

The evacuees left China on planes chartered by the State Department in early February, as the city of Wuhan, center of the novel coronavirus outbreak, was placed under a near-total lockdown. Their 14-day mandatory quarantine is now over.

"It is important to know that these people being released from quarantine pose no health risk to the surrounding community, or to the communities they will be returning to," McDonald said.

He added that all the remaining Americans who took U.S.-chartered flights out of Wuhan are expected to complete their own quarantine periods later this week.

"Newly quarantined Diamond Princess cruise ship passengers are being kept separate from those individuals who are already at Travis and nearing the end of their quarantine," McDonald said, referring to the ship that's been sitting at a cruise ship terminal under a quarantine in Yokohama, Japan.

Quarantined cruise ship to get meals from José Andrés' charity

World Central Kitchen, initially created by chef José Andrés to help people stricken by natural disasters in the Caribbean, says it has set up a field kitchen in a parking lot near the Diamond Princess cruise ship at Shinko Pier in Yokohama, Japan, where the vessel is nearing the end of a 14-day coronavirus quarantine.

The charity is providing food for those on board in a bid to ease the strain on the ship's crew, which has been working to feed passengers, keep the ship clean and perform other duties as the cruise ship sits in isolation at the terminal.

"This is to relieve pressure on the crew," Smith said via Twitter, adding that he believes the extra help could make it easier for people working on the ship to observe quarantine rules.

This is how we @WCKitchen build a field kitchen in 15 seconds! #DiamondPrincess @PrincessCruises pic.twitter.com/VXzyTRRPFp

"It's definitely a different situation for us," World Central Kitchen's Sam Bloch said in a video update about the operation, acknowledging the uncertainty over how long the quarantine might last for some passengers and crew.

The food is prepared and cooked in a full kitchen before it's taken to an impromptu kitchen at the terminal, the group says. From there, it gets reheated as needed and delivered to the ship. Bloch, who directs the group's field operations, says the meals are ready to serve when their containers are loaded onto the ship by forklift.

"The crew doesn't have to cook and do all the work," Bloch says. "They get to get some rest."

Andrés said via Twitter that the World Central Kitchen team "will be there working side by side with everyone on the ground as long as we are needed."

Before arriving in Japan, Bloch was working in Australia, where World Central Kitchen operates a "relief kitchen" to feed firefighters and evacuees. The organization is active in a number of other places, from Puerto Rico and the Bahamas to Venezuela and along the U.S.-Mexico border.

The director of a hospital in Wuhan, China, the center of a deadly coronavirus outbreak, has died from the disease COVID-19, state media reported Tuesday, highlighting the risk that the respiratory virus poses to health professionals.

Liu Zhiming, whose age is variously being reported as 50 or 51, was head of the Wuchang Hospital. He was also one of more than 1,700 medical workers confirmed to be infected with the highly contagious virus, according to China Daily. The state news outlet adds that the number of workers dates from last Tuesday — meaning even more doctors, nurses and other medical staff might now be infected. 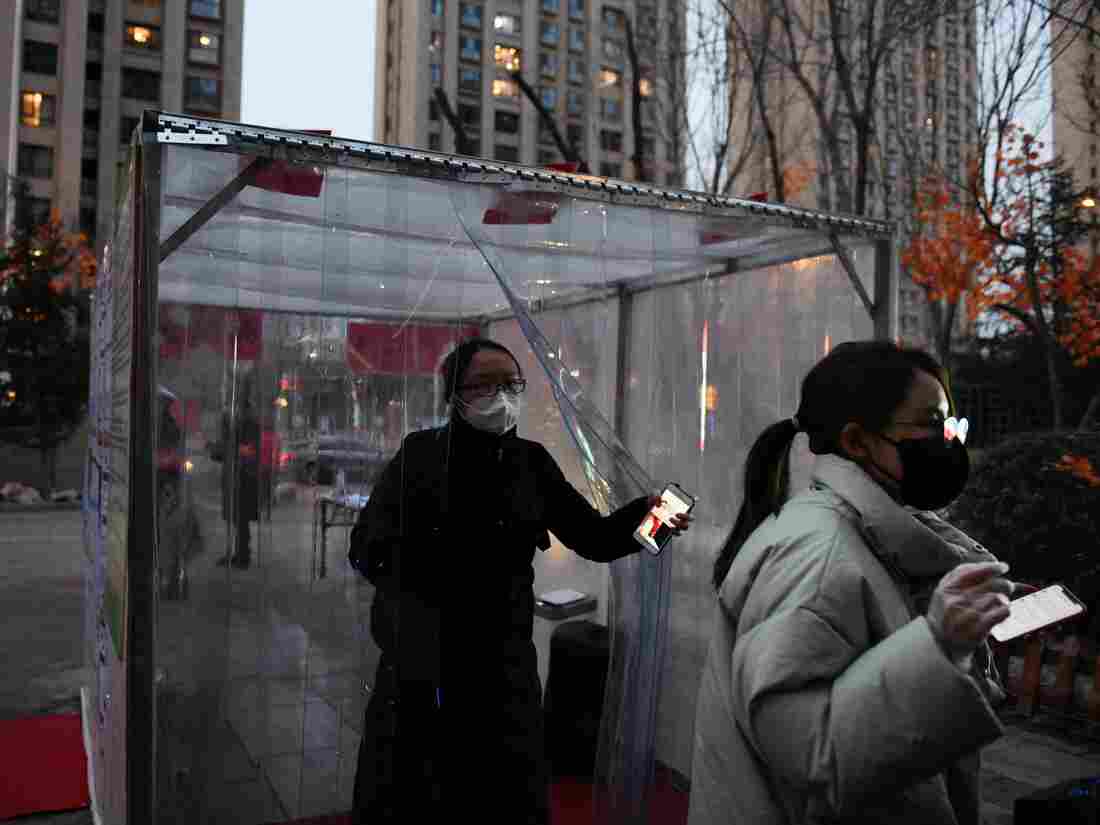 Mainland China currently has more than 70,000 confirmed COVID-19 cases. Here, people pass through a disinfection channel set up at the entrance to their residential compound in Tongzhou, east of Beijing. Greg Baker/AFP via Getty Images hide caption 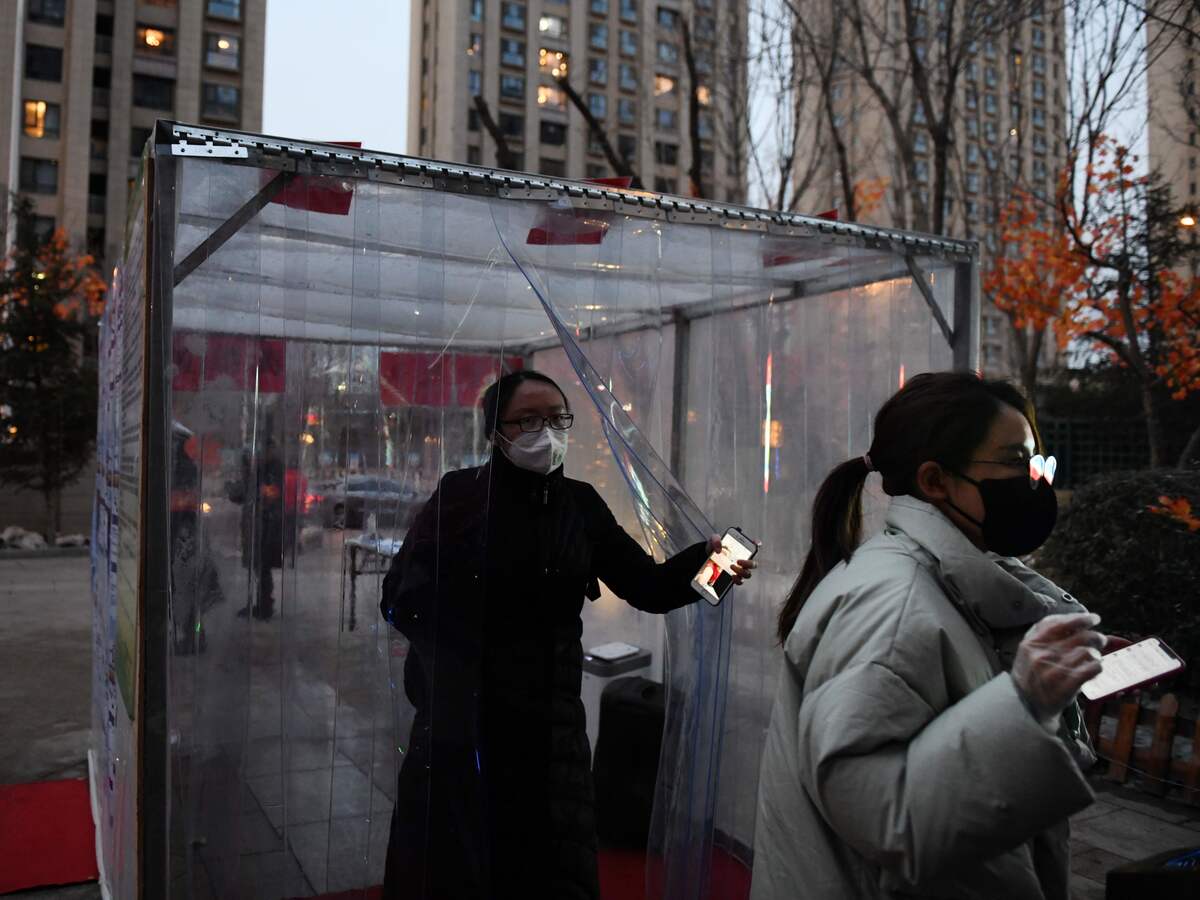 Mainland China currently has more than 70,000 confirmed COVID-19 cases. Here, people pass through a disinfection channel set up at the entrance to their residential compound in Tongzhou, east of Beijing.

Mainland China currently has seen more than 70,000 confirmed COVID-19 cases, according to the World Health Organization. And while the country has suffered the majority of deaths associated with the outbreak, health experts in China say there are signs that the pace at which the virus is spreading might be slowing down.

"Today's numbers from China's national health commission show that the rate at which new cases reported outside Hubei province, where the epidemic has been concentrated, has dropped for two weeks. China's top state epidemiologist said earlier this week that he expected the outbreak to peak sometime in April.

"However, distrust in official state statistics is still high. Hubei in part has the largest share of virus cases in China because it is the only province that discloses so called clinical cases — symptomatic patients who haven't tested positive for the virus. Other provinces are mandated to collect such data but have not disclosed these types of cases publicly."

The Diamond Princess cruise ship quarantined at a terminal in Yokohama, Japan, still represents the largest cluster of COVID-19 cases outside China. On Tuesday, Japan's health ministry said tests confirmed 88 more cases — including 65 people who were identified as asymptomatic pathogen carriers. The diagnoses bring the total number of cases from the ship to 542 out of 2,404 people who have been tested, Japanese officials say.

The Diamond Princess had some 3,700 people aboard when it docked in the port south of Tokyo earlier this month. But hundreds of people have since disembarked, either to receive care at local hospitals or, in the case of more than 300 American passengers, to fly back to the U.S. on chartered evacuation flights.

"We walked into the airplane hangar, and there were military people clapping and cheering for us," former Diamond Princess passenger Gay Courter told NPR's Morning Edition, describing the scene as she and her husband, Philip, arrived at Lackland Air Force Base in Texas. "And that's when I broke down in tears. It was this overwhelming relief."

Sixty-one U.S. citizens remain on the Diamond Princess, which is slated to begin emerging from its blanket quarantine on Wednesday. While many passengers will be allowed to leave the ship if they test negative for the new coronavirus, others will have to undergo a longer quarantine if they've been in close contact with anyone who has the COVID-19 disease.

After the U.S. passengers were taken off the Diamond Princess, 14 of them were revealed to have tested positive for the new coronavirus. U.S. officials say they got the results after the patients had been taken off the ship — and that all 14 were placed in a special section at the rear of one of the chartered jets because of the possible health risk to other evacuees.

The evacuees were flown to Lackland in Texas and Travis Air Force Base in California — the two designated quarantine spots for Diamond Princess passengers taken to the U.S. But 13 infected evacuees were then flown to Omaha, Neb., to receive care at the University of Nebraska Medical Center. It's not clear why the other infected evacuee wasn't among them.

"Those who have tested positive for this novel coronavirus, are only showing mild symptoms of the disease," Nebraska Medicine said in a statement.

The facility includes a 20-bed national quarantine unit, where 12 of the evacuees are now being monitored. But another evacuee was deemed to need specialized care and was placed in a biocontainment unit.

The University of Nebraska Medical Center runs the national Training, Simulation and Quarantine Center, which it says has "the nation's only federal quarantine unit and simulated biocontainment units for advanced experiential training."

The center has been involved in combating other dangerous outbreaks in recent years, including the Ebola virus outbreak that started in 2014.