Accessibility links
Best Treatments For New Coronavirus Now An Urgent Target For Biotech Labs : Shots - Health News The new coronavirus has spurred biotech labs in universities and companies to try to find new approaches to stopping the virus — from blocking its key enzymes to interfering with its genetics. 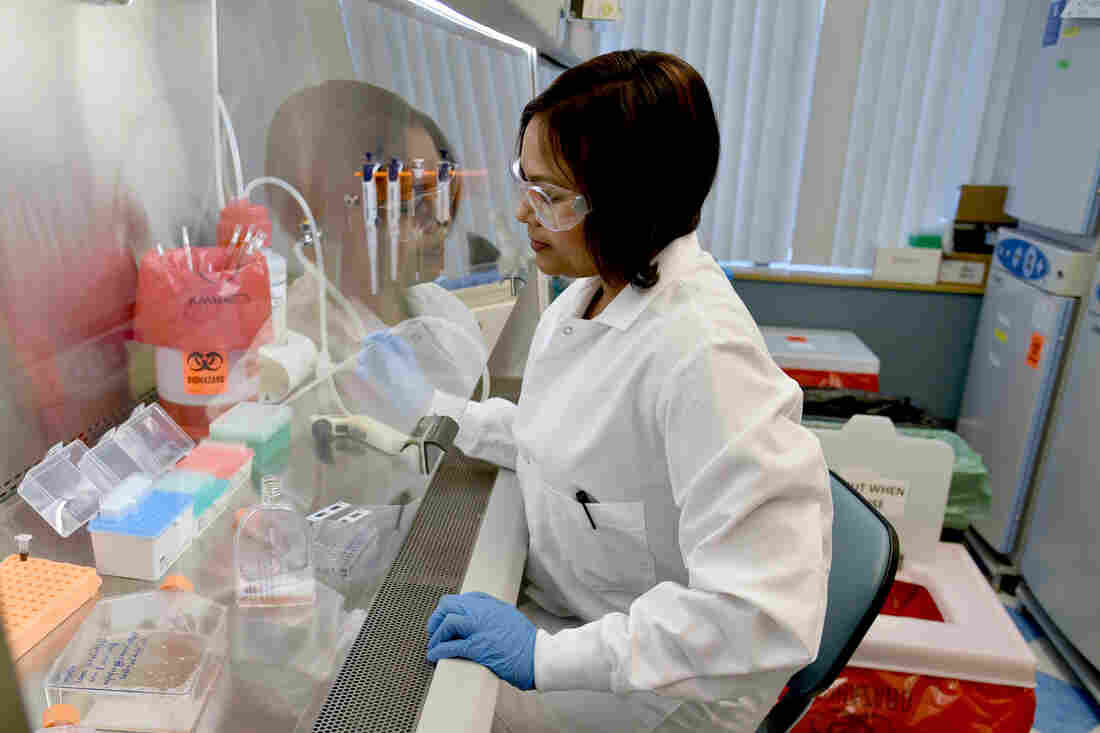 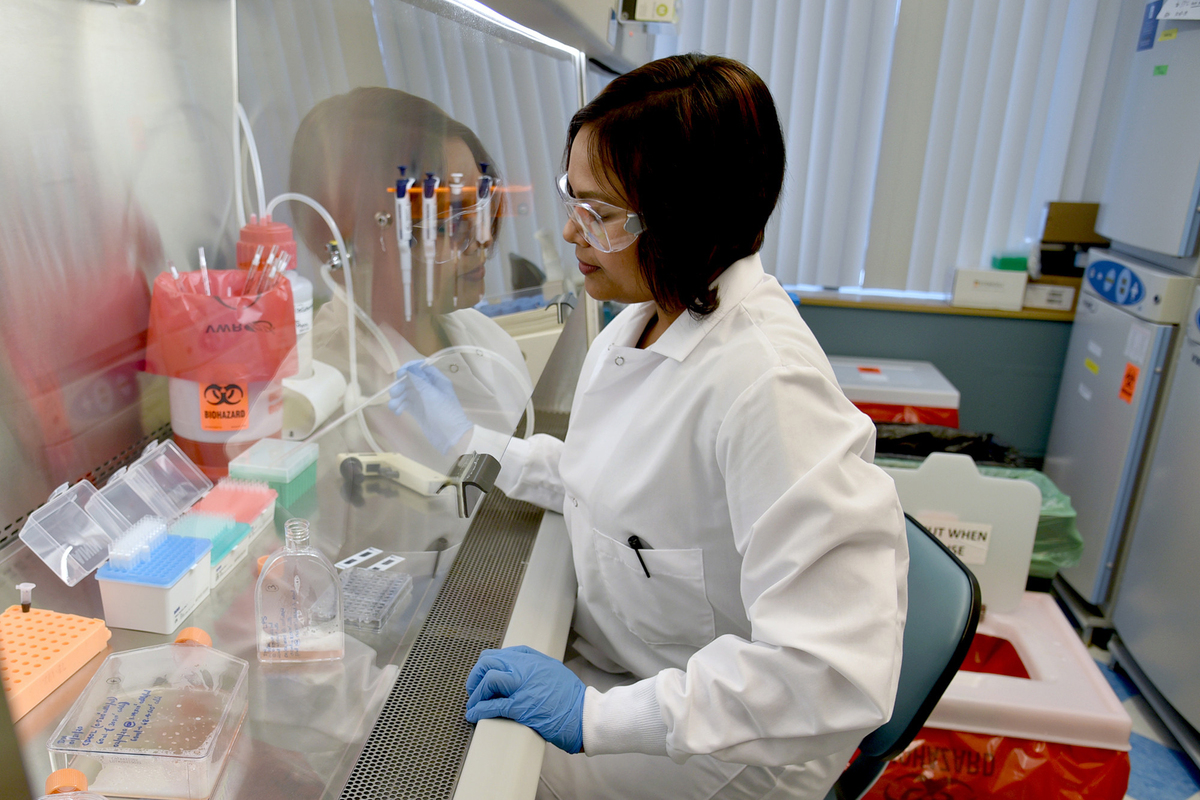 Research & Development associate Divya Nagalati works on cell cultures in Regeneron's infectious disease labs in Tarrytown, N.Y. The firm is looking for tailored antibodies that might prove useful against the new coronavirus.

Viral infections can be very hard to treat. Just ask anyone who has a bad case of the flu.

But that's not deterring research groups around the world from looking for an effective therapy against the new coronavirus, although they know it won't be easy.

"Every virus is sort of like a dysfunctional family," says Dr. Mark Denison, a virologist at Vanderbilt University School of Medicine. "They're dysfunctional in their own unique ways."

There are two basic approaches to stopping viral infections. One is to block an enzyme the virus needs either to make copies of itself or infect cells. The other is to make a monoclonal antibody, based on a recovered patient's immune response.

Researchers are already testing the first idea — with an experimental, broad-acting antiviral drug known as Remdesivir, which works by gumming up a virus's ability to replicate.

The drug is being tested in China on patients who have COVID-19. A study published just last week found that Remdesivir successfully reduced respiratory symptoms in rhesus monkeys exposed to another coronavirus that causes serious disease — Middle East respiratory syndrome.

In other work, the biopharmaceutical company Sirnaomics is hoping to use a gene-silencing technique known as RNA interference to turn off key genes in the new coronavirus. But first, the company must identify viral genes to target.

"We are currently testing 150 of them using cell-based culture," says Patrick Lu, Sirnaomics president and CEO. "We are working with groups in the U.S. and China."

Some drugs that are already through the FDA approval process may also have the desired blocking effect on one of the new virus's critical enzymes, scientists say.

The second basic approach is to go after the virus with molecules derived from the immune system. The idea is to make what are called monoclonal antibodies, which are tailored proteins that are known to stop a particular virus.

That's the approach of a Canadian biotech firm called AbCellera.

"We're trying to identify antibodies from patients who have recovered from infection," says Ester Falconer, head of research and development at AbCellera, "because their finely tuned immune systems have already figured out a way to clear the virus."

AbCellera is part of the Pandemic Prevention Platform, a program run by the federal Defense Advanced Research Projects Agency. The company has developed a rapid way to analyze the blood from a recovered patient.

"We can very quickly — in less than a day — look through many millions of different immune cells," Falconer says, and find the antibodies that can be turned into a monoclonal drug therapy.

The biotech firm Regeneron is also looking for such antibodies. To find them, the company is using mice that have been given what amounts to a human immune system.

Regeneron's Christos Kyratsous says these mice make antibodies when exposed to a virus like the coronavirus — but they don't make mouse antibodies.

They've begun exposing the mice to a virus that mimics the new coronavirus.

"The mice are mounting an immune response against these components as we speak," Kyratsous says. "Within the next few weeks, we should be able to start harvesting antibodies out of these mice and testing them" to see which ones will make the most effective drug.

"If we understood ways that the coronavirus has caused lung disease, we might be able to block that damage while we're treating the virus," Denison says.

He's confident that understanding will come. The recent outbreak, he says, has underscored the need to come up with new ideas about how to treat outbreaks caused by new viruses, and he's optimistic new approaches will be found.

"I don't think about a decade," he says. "I think about this in terms of right now we're in a position to try to move forward quickly with these ideas.