Accessibility links
Coronavirus Treatment In Isolation: One U.S. Patient's Story : Shots - Health News Carl Goldman tested positive for the new coronavirus after leaving the ship and arriving in the U.S. He is recovering in an isolation unit of the University of Nebraska Medical Center. 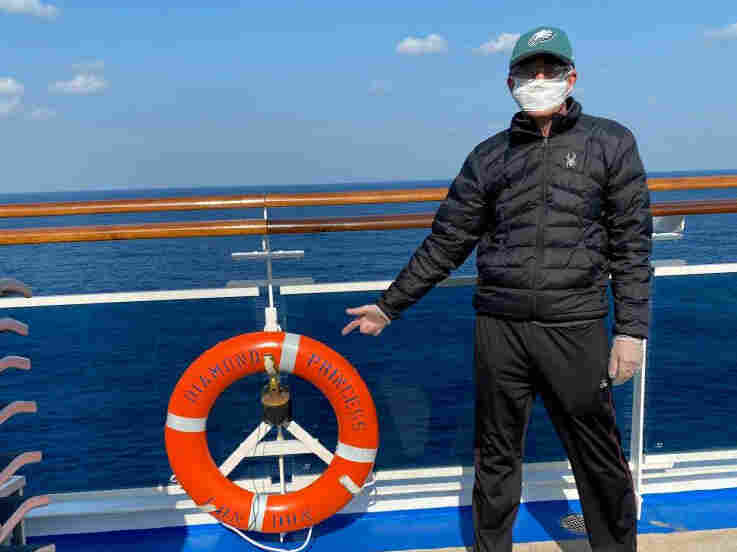 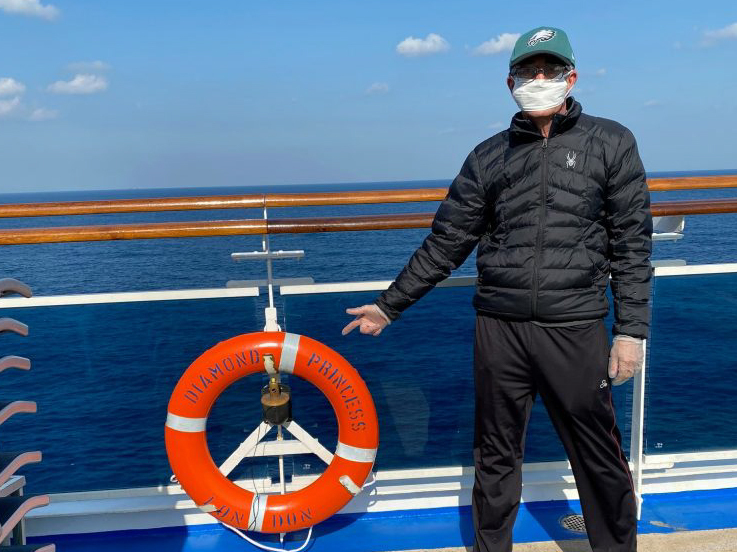 Carl Goldman says he was excited to visit new places on the Diamond Princess cruise through Southeast Asia.

What's it like living with a coronavirus infection, isolated in a biocontainment unit? For Carl Goldman, diagnosed this week in Nebraska, his condition doesn't feel any different from a typical cold, he told NPR's Noel King. But the treatment is unusual: Doctors visit him each day wearing hazmat suits, and hospital staff wave at him from behind double-sealed windows.

Goldman arrived at the University of Nebraska Medical Center on Monday, after being evacuated from the Diamond Princess cruise ship, where more than 620 passengers were infected with the coronavirus.

The cruise through Southeast Asia was a gift for his wife, Jeri Seratti-Goldman, for Christmas and her birthday. As owners of a local radio station in Santa Clarita, Calif., the two were looking forward to a break, but it didn't turn out quite how they hoped. "Who knew we were going to end the cruise in beautiful Omaha?" Goldman says.

The couple left California for the 16-day cruise on Jan. 17. But then, about two weeks in, they got bad news. The ship's captain reported that a passenger who had already left the ship was diagnosed with the coronavirus.

The captain doubled the ship's speed, rushing back to Yokohama, Japan.

Instead of getting off the ship, passengers were tested by Japanese health officials and were told they couldn't leave their cabins. They were kept aboard for 12 days to try to contain the disease.

Food was delivered three times a day by crew members in masks and gloves. The couple entertained themselves by reading and watching movies. From their room, they could see ambulances carry away sick passengers.

Goldman and his wife were able to leave their rooms and visit the ship's deck only three times during those 12 days under quarantine, Goldman recalls. The couple's suite had a balcony, but not all the passengers had one. "We were one of the lucky ones," he says. 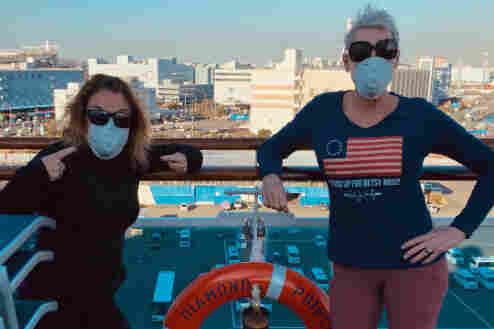 Jeri Seratti-Goldman (left) and Jerri Jorgensen aboard the Diamond Princess. Seratti-Goldman, who never caught the virus, didn't want the cruise to end, her husband says. But not long before it was scheduled to be over, the new coronavirus hit, and passengers were quarantined — allowed on deck for only a limited time each day. Carl Goldman hide caption

The U.S. State Department chartered flights to bring home many of the Americans on the ship. It wasn't until their flight back to the U.S. that Goldman started feeling sick.

"When we were flying back from Japan to the States, about two hours into the flight, I woke up with a high fever after napping a little bit," he says.

Along with 12 other infected evacuees, Goldman was flown to Omaha, Nebraska. When the flight landed, he asked to ride shotgun in the ambulance but was denied. He tested positive for the coronavirus. He is recovering in a biocontainment unit at the University of Nebraska Medical Center, where he'll have to spend 14 days in isolation. The unit is a separate area in the hospital with its own ventilation system and security.

Doctors in hazmat suits check on Goldman each day, he says. "I've got a little cough still ... my voice is a bit raspy, and I'm a little fatigued, but that may be also because of the jet lag and the travel and everything else on top of it," he says. "It doesn't feel any different than recuperating from a regular cold." 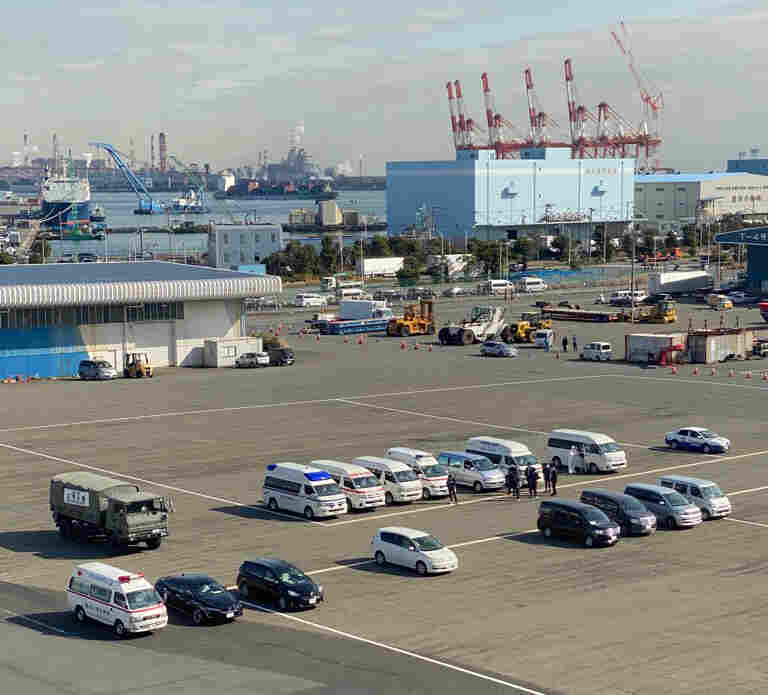 Ambulances lined up outside the Diamond Princess in port, waiting to transport passengers with the coronavirus to a Japanese hospital. Passengers who hadn't tested positive for the virus remained isolated in their cabins on the ship. Carl Goldman hide caption

As of Tuesday, he reported that his vitals are strong. "They're giving me a lot of Gatorade," he says. He is not taking any medication, but many monitors surround him, with tangled wires attached to his body.

It's not completely clear why Goldman got sick while his wife avoided the virus, even though they were sharing a cabin. The answer might just be luck, says Dr. Anthony Fauci, director of the National Institute of Allergy and Infectious Diseases.

"In any kind of viral infection, there's always a wide range of responses, almost like a bell-shaped curve," he told NPR.

Some people have no symptoms at all, while a fraction have more intense reactions, he says.

Elderly people or individuals with certain chronic conditions may be more vulnerable, Fauci says. But "there is no virus that has a 100 percent attack rate," he adds. "Even the most infectious of all viruses, like measles, doesn't get 100% of vulnerable people."

While he has been infected, Goldman has been getting warm wishes from friends, he says — including some he hadn't heard from in decades. Goldman has been reporting about his experience on his radio station's website. 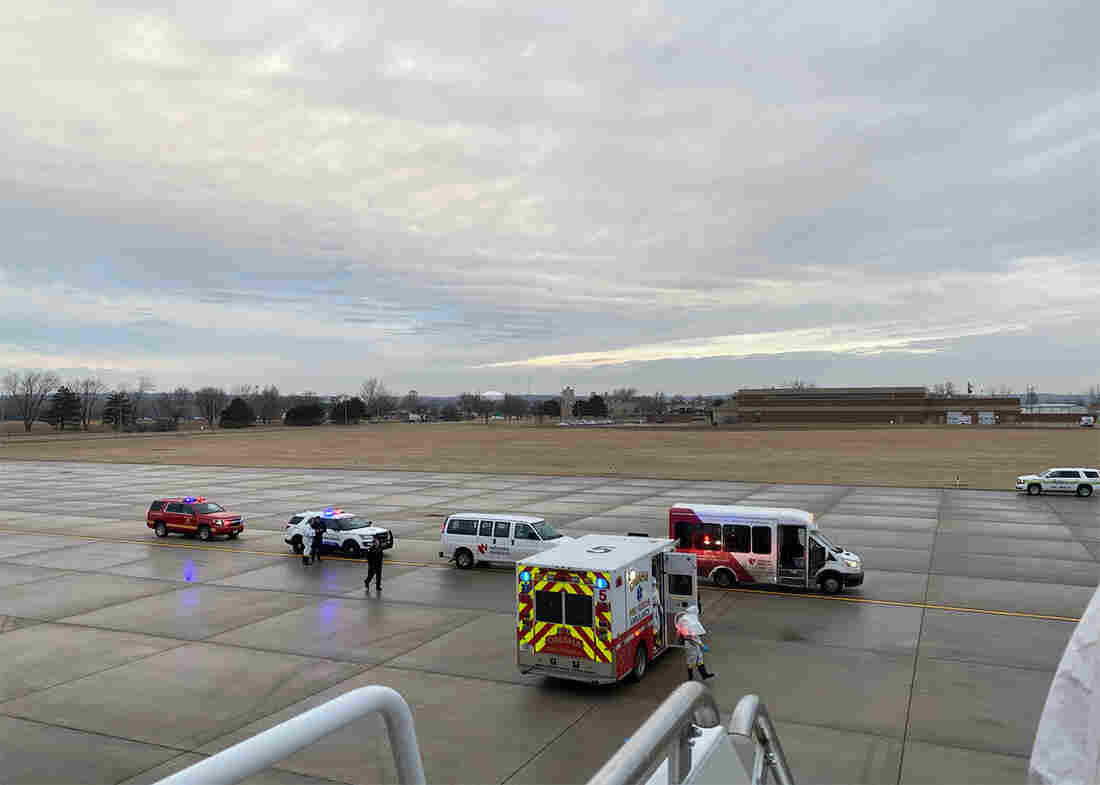 When Goldman and his wife landed in Omaha, Neb., emergency vehicles met their flight, and officials from the Centers for Disease Control and Prevention boarded the plane. Carl Goldman hide caption

Though he knows there's no treatment currently, Goldman hopes that he and other COVID-19 cases in the United States will give doctors more data to study the disease. "Each case gives them a little bit more information," he says. "It's going to be a learning experience for everybody."

Elena Renken is an intern on the NPR science desk.