Accessibility links
How Good Friends Are Good For Your Health : Shots - Health News In her new book, Lydia Denworth makes the case for the vital necessity of friendship, tracing its effects on your genes, on your brain and even on animals like sheep and fish. 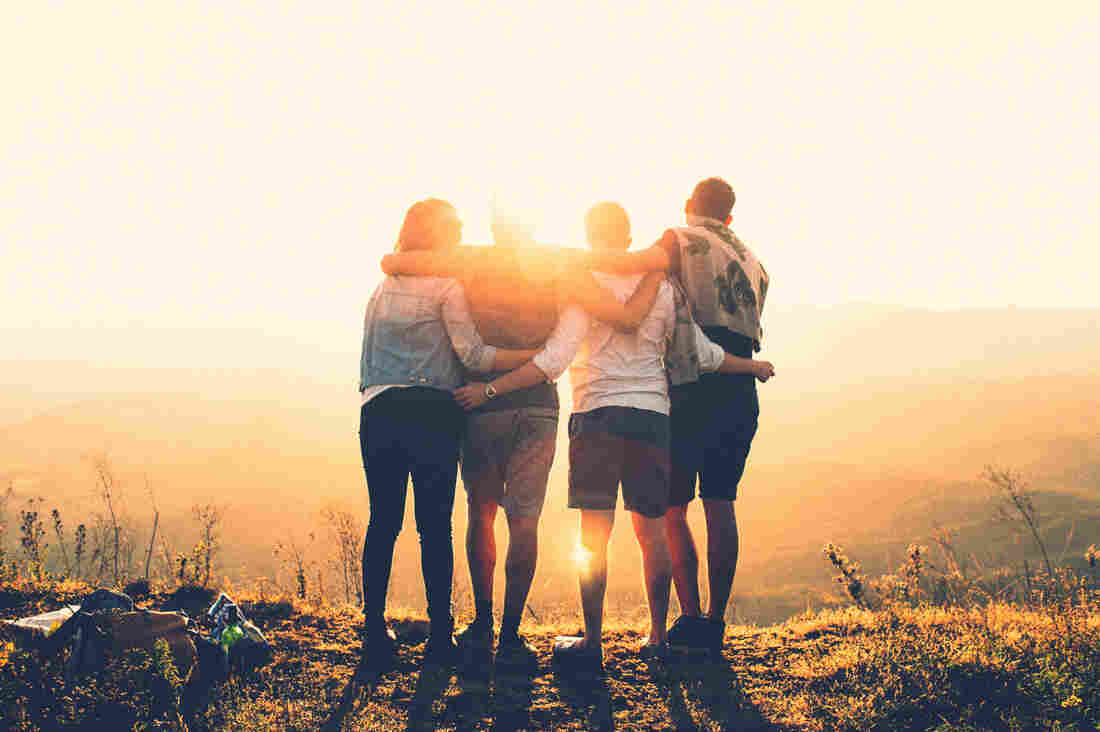 A growing field of science shows that friendship is vital to our health. Muaz Bin Saat/EyeEm/Getty Images hide caption 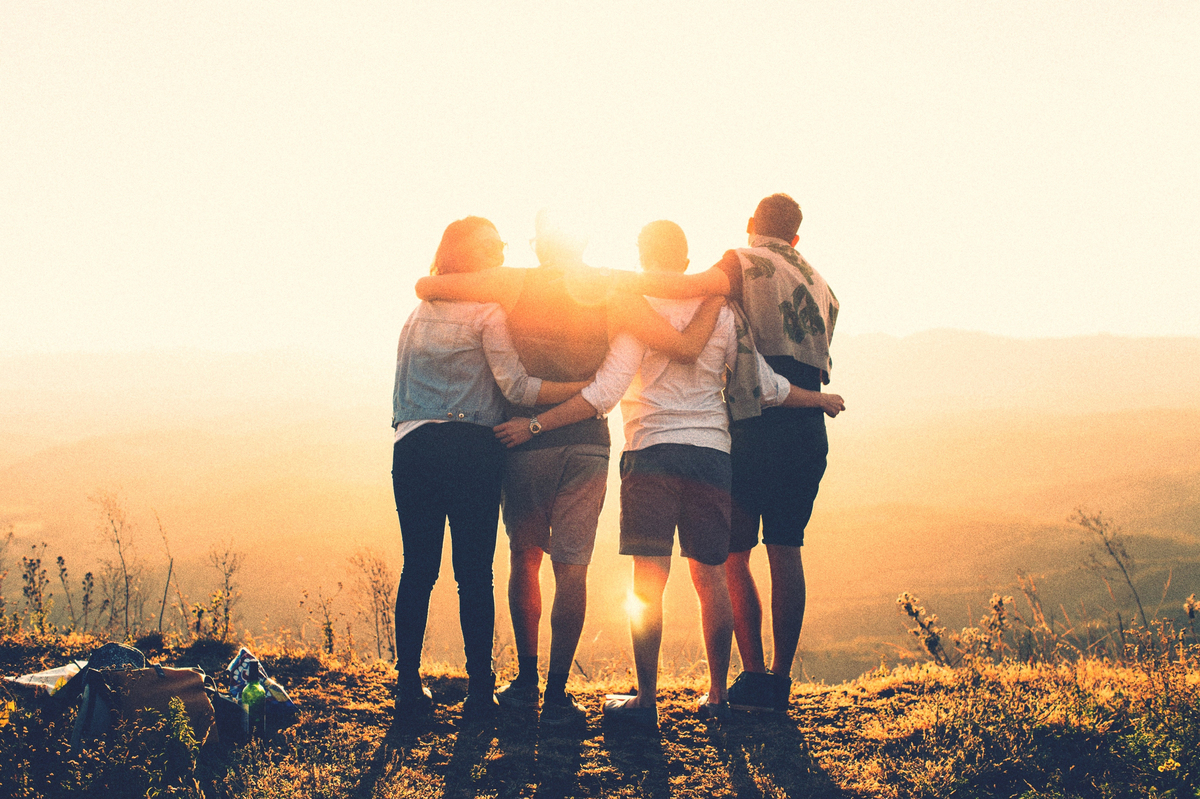 A growing field of science shows that friendship is vital to our health.

Lydia Denworth wants you to make more time for your friends.

We don't fully appreciate our friendships, says the science writer and author of the new book Friendship: The Evolution, Biology, and Extraordinary Power of Life's Fundamental Bond. If we did, we'd take cultivating those intimate bonds as seriously as working out or eating well. Because, she writes, a new field of science is revealing that social connections play a vital role in our health.

On average, people have only four very close relationships, Denworth finds, and very few people can sustain more than six. But the effect of these few core relationships extends beyond our social lives, influencing our health on the cellular level — from our immune system to our cardiovascular system.

Denworth spoke with NPR about the science of friendship and its underestimated value to kids and adults and even for other species like sheep and fish. (Although she's frequently asked about human-animal friendships, Denworth sticks to bonds within one species in the book.)

What is most misunderstood about friendships?

Very few people understand that your social relationships can actually change your health. They can change your cardiovascular system, your immune system, how you sleep, your cognitive health. How could this thing that exists entirely outside the body affect whether you're likely to catch a virus? And yet that's exactly what we now know that social connection does. We thought of loneliness as this difficult emotion, but just an emotion. And we think of friends as this lovely thing — but it is actually a matter of life and death. And there's this evolutionary drive to connect. People think all the time about competition and survival of the fittest, but really it's survival of the friendliest.

Is friendship just something humans do, or do we see it in other species?

What has been surprising to evolutionary biologists is just how much friendship exists across species. They have found something that looks like friendship in dolphins, and elephants, and horses, and zebras, and hyenas and all kinds of species. Even fish — their brains respond to familiar fish versus strange fish in ways that look a lot like what goes on in our brains. Understanding that tells you there's this much larger story than just human culture. And that's what people thought friendship was: a product of human culture and language. But now we understand that it is universal.

I don't actually think that it's all that unique. We generally think of friends as people we don't have sex with and to whom we're not related. But the truth is that in this new science and in fact the way we live our lives, those lines are blurred. I think of friendship now as a template for all your relationships, because if you think about the sort of basic definition of friendship — it makes you feel good, it's positive, a long-lasting stable relationship, and it has some cooperation and reciprocity to it — that's what you want to be striving for in your closest relationships. And that can be with your spouse or your sibling or a relative, but not always. What matters is the quality of the bond, not its origin.

Does gender play a role in friendships?

The standard line is that women do friendship face-to-face and men do it side by side, meaning women spend their time talking and men do things together. And there's truth to that, but when you ask men how much they value friendship, their answers are the same, for the most part. The similarities are greater than the differences between men and women.

One of your chapters focuses on the social aspect of middle school. How did researching that affect your thinking as a parent?

The middle school thing, it's such a crucible. And it really is true: Middle school is about lunch. Most parents thinking about their kids going into middle school, they do know that socially it can be a very difficult time, but they don't necessarily think about how that plays out in the course of a day. [Realizing] that crystallized to me this idea that friendship really, really matters in kids' lives, and we are falling down on the job, as parents and teachers, if we aren't fully understanding that. Things that I might have said no to before, I am more likely to say yes to now, if it means that my kids are going to be with their good friends.

Is social media helping or hurting our friendships?

Friendship is alive and well in the age of social media. In terms of relationships and connectivity and networks, it's a positive. The place where it is hard on relationships is when you're face-to-face and instead of looking at your friends, you're looking at your phone. Looking at a person face-to-face, in person, your brain responds differently even if you look at that same person on a screen, and certainly if you're online and not looking at their face. There's all this talk about the word "friend" being devalued by things like Facebook using [the term], but I don't really think that's true. We know who our really good friends are, whether we're online with them or offline.

Do you see friendship taken for granted in the world around you?

I do. Friendship is so familiar that we think we know all about it, but we don't fully appreciate it. We think it's pleasurable and fun, but friends are often the first thing to go when you're busy. Or you fall in love and ditch your friends. I was guilty myself of passing a friend on the street corner here in Brooklyn and saying, "Let's definitely get together," and then not. We are so achievement driven in so much of what we do. I think it's healthy to be reminded that time with other people really matters.

How did writing this book make you think differently about your own friendships?

It's made me prioritize them more. The message is not that I want people to think of friendship as another chore. I am hoping that people feel this is giving them permission to make friends a priority. To spend time with their friends and to know that when they do, they're doing something good for their own health and for their friends' health, and I've taken that to heart.

Elena Renken is an intern on the NPR science desk.