Accessibility links
9 Coronavirus Deaths Now Reported In Washington State : Shots - Health News Two people who died on Feb. 26 were found to have had the coronavirus. They were residents of Life Care Center in Kirkland, Wash., which is considered to be the site of an outbreak.

Health care workers transfer a patient to an ambulance at the Life Care Center of Kirkland, Wash., the long-term care facility where the two people who had posthumous diagnoses of COVID-19 were residents. David Ryder/Reuters hide caption 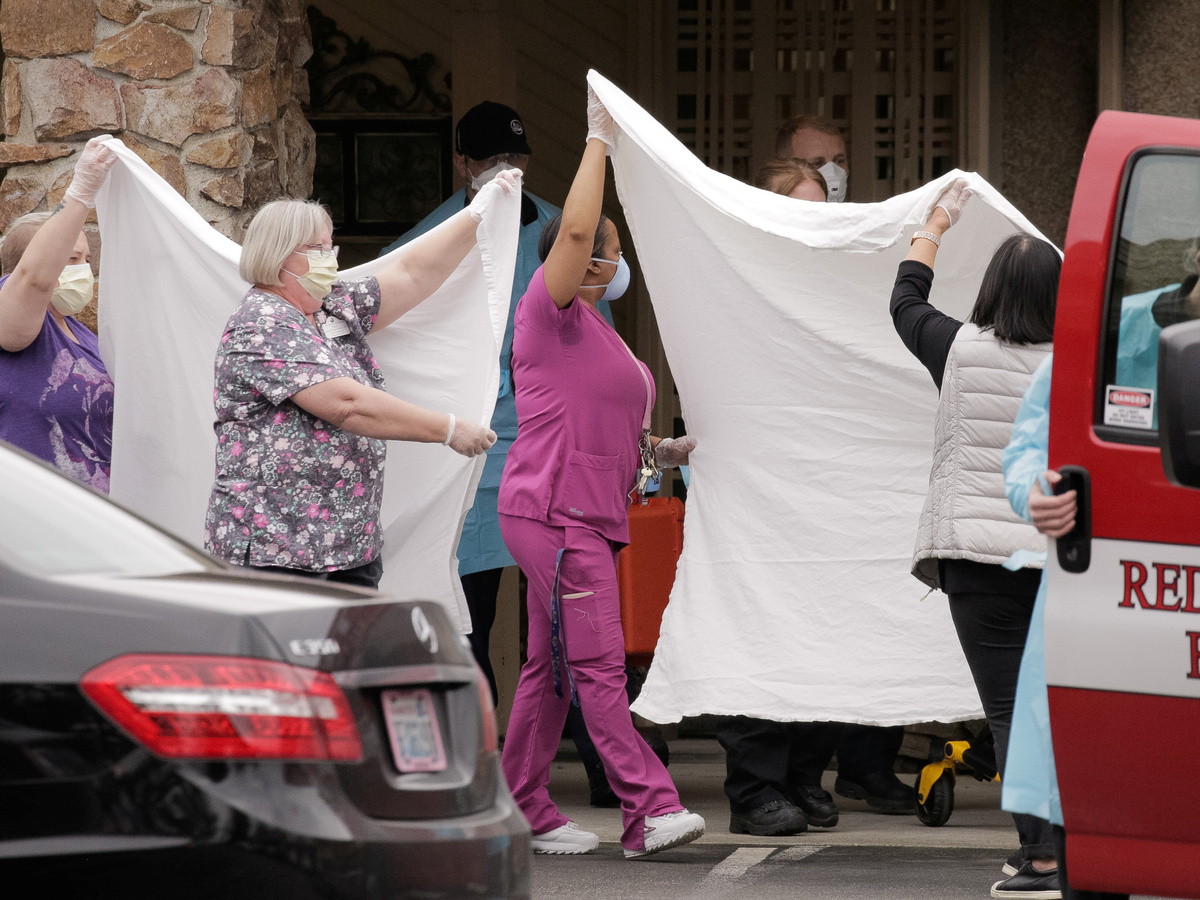 Health care workers transfer a patient to an ambulance at the Life Care Center of Kirkland, Wash., the long-term care facility where the two people who had posthumous diagnoses of COVID-19 were residents.

The coronavirus death toll in Washington state now stands at nine, with a total of 27 confirmed cases of the virus that causes COVID-19.

The newly revised tally includes two people who died in the Seattle area last week and have since been found to have been infected with the novel coronavirus, the health department in King County, Wash., announced Tuesday.

The posthumous diagnoses means the pair — a woman in her 80s and a man in his 50s — were likely the first in the U.S. to die from the disease. They both died on Feb. 26.

King County has 21 cases, including eight deaths, and neighboring Snohomish County has six cases, with one death, according to the Washington state health department.

Among seven new cases that were announced in King County on Tuesday are a woman in her 40s who worked at Life Care Center of Kirkland, Wash., the long-term care facility that is considered to be the site of an outbreak. She is recovering at home.

And in a worrying sign of new community transmission of the virus, two men in their 20s are now hospitalized at the Swedish Issaquah medical center, east of Seattle, after contracting COVID-19 through an unknown exposure, the county health department says.

Both of the people who died last week were residents of Life Care Center. The facility has now been linked to at least nine COVID-19 cases and several deaths.

The male patient was transferred to Harborview Medical Center in Seattle on Feb. 24 and died two days later, according to a statement from University of Washington Medical Center, which operates the Harborview facility.

The female patient was never hospitalized and died at her family's home, according to the public health agency for Seattle and King County.

Of the Harborview case that had previously been undiagnosed, UW Medicine said, "We have determined that some staff may have been exposed while working in an intensive care unit where the patient had been treated."

Coronavirus Testing: What To Know As It Becomes Available Across The U.S.

Those staff who were potentially exposed to the novel coronavirus are being monitored and screened daily, the organization says. It adds that other patients are not believed to have been exposed to the pathogen.

The hospital network says it learned of the positive test result for the COVID-19 illness from the local health department in King County.