Accessibility links
Computer Models Of COVID-19 Outbreaks Could Help Stop Coronavirus : Shots - Health News As the world watches the outbreak of a novel coronavirus, epidemiologists are watching simulations of that outbreak on their computers to try to predict what might happen next. 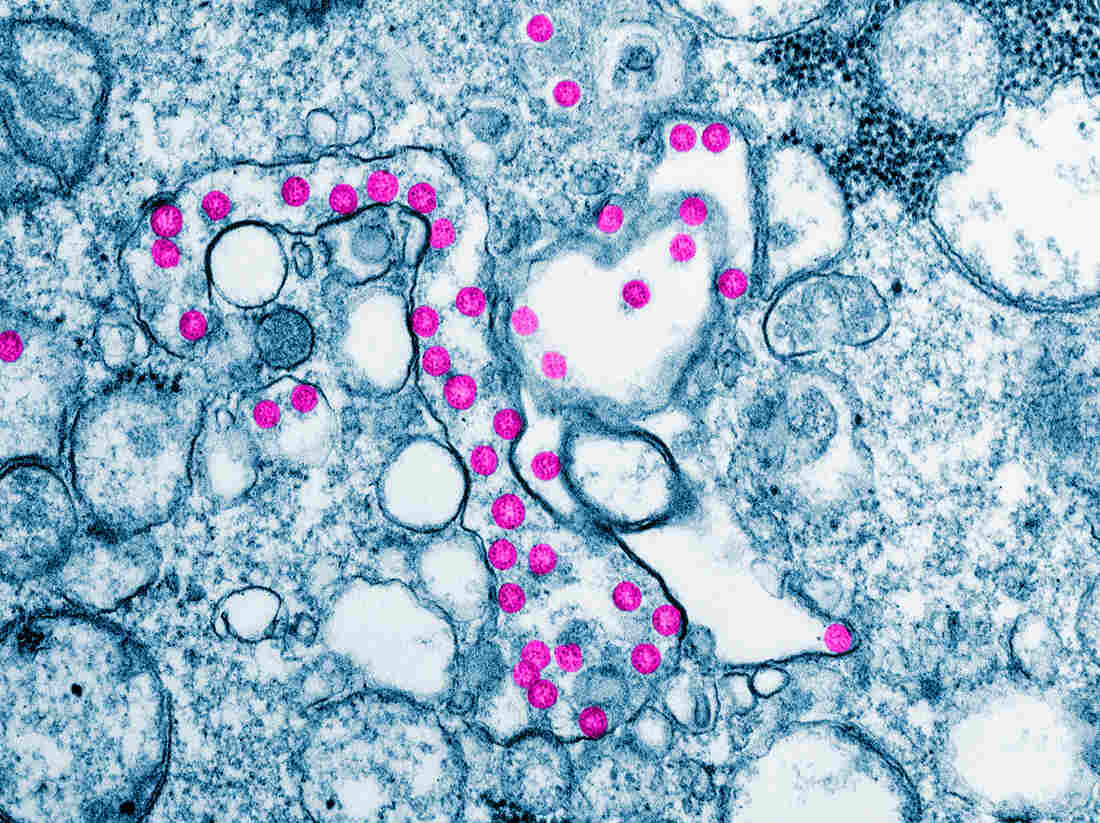 Viral particles are colorized purple in this color-enhanced transmission electron micrograph from a COVID-19 patient in the United States. Computer modeling can help epidemiologists predict how and where the illness will move next. Hannah A Bullock and Azaibi Tamin/CDC/Science Source hide caption 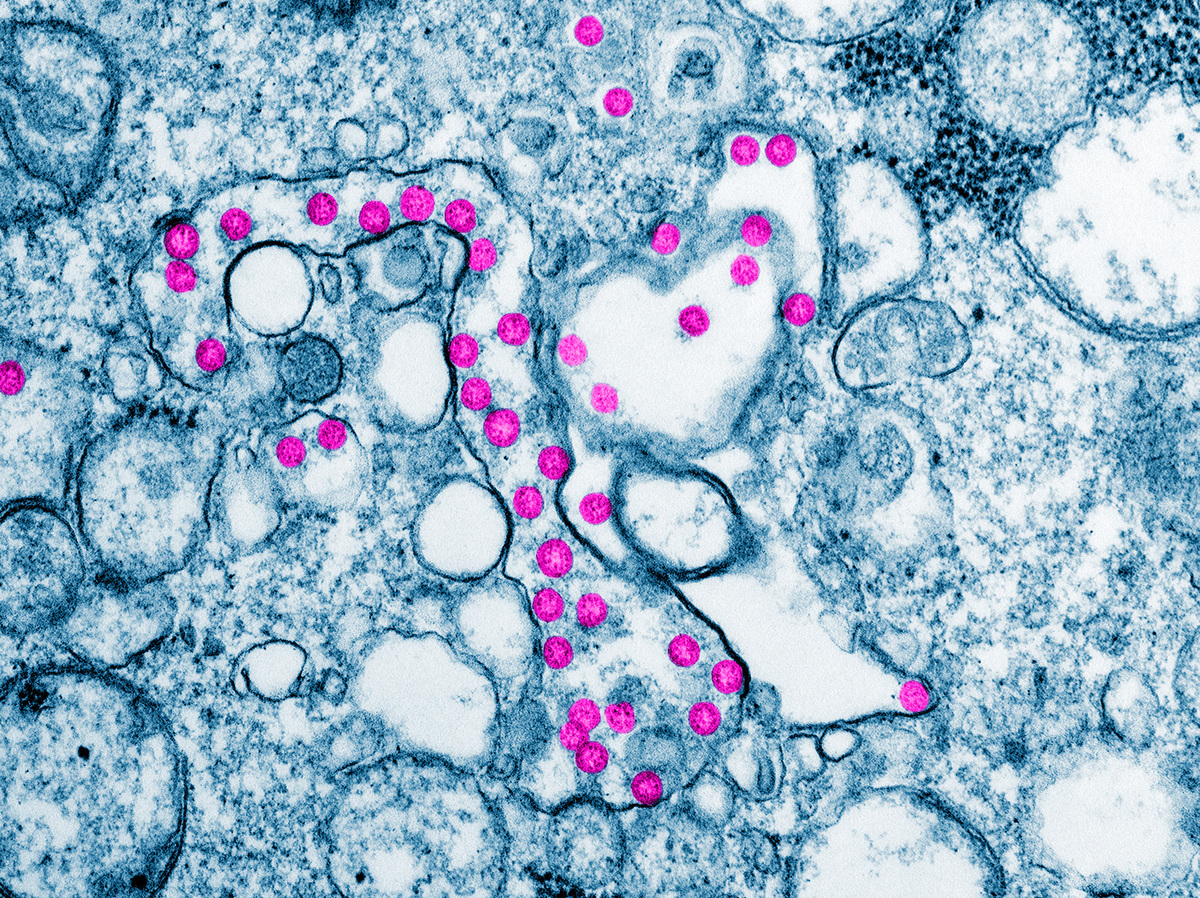 Viral particles are colorized purple in this color-enhanced transmission electron micrograph from a COVID-19 patient in the United States. Computer modeling can help epidemiologists predict how and where the illness will move next.

Scientists who use math and computers to simulate the course of epidemics are taking on the new coronavirus to try to predict how this global outbreak might evolve and how best to tackle it.

But some say more could be done to take advantage of these modeling tools and the researchers' findings.

"It is sort of an ad hoc, volunteer effort, and I think that's something that we could improve upon," says Caitlin Rivers, an infectious diseases modeler with the Johns Hopkins Center for Health Security.

In her view, "modeling plays a really important role in understanding how an outbreak is unfolding, where it might be going, and what we should be thinking through."

But only a small number of the modelers of epidemics work for the federal government, she says. Most are in academia, and they don't have formal relationships with officials who have to make key public health decisions.

Still, they are highly motivated to put their skills to use for the public good. They got to work almost as soon as the first reports of a new virus in China emerged in late December.

They've made similar efforts for past outbreaks, such as Ebola and Zika. But this time around felt different, people in the field say.

"I've never seen the modeling community so galvanized, you know — around this outbreak, and willing to share and collaborate," says Cecile Viboud, a scientist at the Fogarty International Center, based at the National Institutes of Health.

And research teams have been rapidly churning out insights. By mid-January, one group had circulated an analysis listing the top 15 cities at risk of the virus spreading, based on airplane flights and travel data.

Another team announced that it had used the number of infected people detected outside China to help figure out what might really be going on in Wuhan city. Those researchers estimated that there were actually more than 1,700 cases at the time, though the official count of confirmed cases was only 41.

"Putting that information out really quickly helped to bring a lot more attention of other modelers to say, 'There are now things that we can do, so let's do that,'" says Rosalind Eggo, an infectious disease modeler at the London School of Hygiene & Tropical Medicine.

She and her colleagues recently took the best available information about transmission and looked at how feasible it would be to control the virus by isolating sick people and tracking down every person they'd had contact with.

"That's a study that we did to try and give useful information to policymakers about what they would need to do with that strategy in order to have a good chance of controlling outbreaks," says Eggo.

What they found is that public health workers would need to trace a high percentage of a sick person's contacts to be effective in shutting down an outbreak quickly.

"You would need to trace at least 80% of contacts to have an 80% chance of containing an outbreak that started with 20 cases within three months," she says. "So that's quite a high number. And it's feasible in some places and potentially infeasible in others."

Her group also looked at the utility of screening airport travelers to detect infected people. One simulation showed that if 100 infected travelers began a journey on a 12-hour flight, about half would not be detected by inbound or outbound traveler screening that was based on symptoms.

"Due to the natural history of the infection, people spend about five days from when they get infected to when they start showing symptoms," Eggo explains. "In that time period, they can travel and won't be detected."

Studies like these can help public health officials decide where to concentrate their time, energy and money.

During the Ebola epidemic in West Africa in 2014, for example, models forecast that the outbreak would continue to grow rapidly without aggressive intervention.

"These forecasts likely contributed to the acceleration of the international response and provided guidance for how resources might be effectively deployed," according to a recent commentary on "outbreak science."

In recent weeks, modelers inside and outside the government have been able to dial into weekly conference calls held by the Centers for Disease Control and Prevention.

The CDC typically gives an update during these calls on where things stand with the new coronavirus and talks about the questions it needs help with, says Viboud. She says one such call had more than 80 people on the line.

Epidemic modelers also have been communicating through the instant messaging platform Slack, as well as Twitter.

"It's never been as organized as it is now," Viboud says.

Still, a computer model is only as good as the data that get put into it.

"Right now the quality of the data is so uncertain that we don't know how good the models are going to be in projecting this kind of outbreak," says Marc Lipsitch, an epidemiologist at the Harvard T.H. Chan School of Public Health.

Modelers are eager for more information about critical issues, such as how many people are infected without symptoms and how much they can spread the virus to others.

Even without perfect data, however, Lipsitch says that virtual outbreaks studied in computers can help policymakers just get their heads around various possible scenarios.

"It's really that models help you think about things," says Lipsitch, "rather than that they tell you things for sure that you didn't know."

Some modelers believe that rather than just using models to react to emerging outbreaks, it would be better for the world to invest in real-time disease forecasting on an ongoing basis.

Much like how the National Weather Service provides forecasts to help people prepare for their local weather, she says, such a center could tell people about their local risk of infectious diseases.

"People could actually, you know, just open their phones and open an app and then see the probability of infection," she says. "It could say like, 'There's a 20% probability of getting flu in your community, based on what is spreading there.'"

The advantage of a system like that, she says, is that all of the researchers, plus data-gathering and modeling resources, would already be in place if a new infectious disease threat like this coronavirus suddenly emerged.