Accessibility links
CRISPR Used To Edit Genes Inside A Patient With A Rare Form Of Blindness : Shots - Health News Doctors used CRISPR to edit genes of cells inside a patient's eye, hoping to restore vision to a person blinded by a rare genetic disorder. A similar strategy might work for some brain diseases. 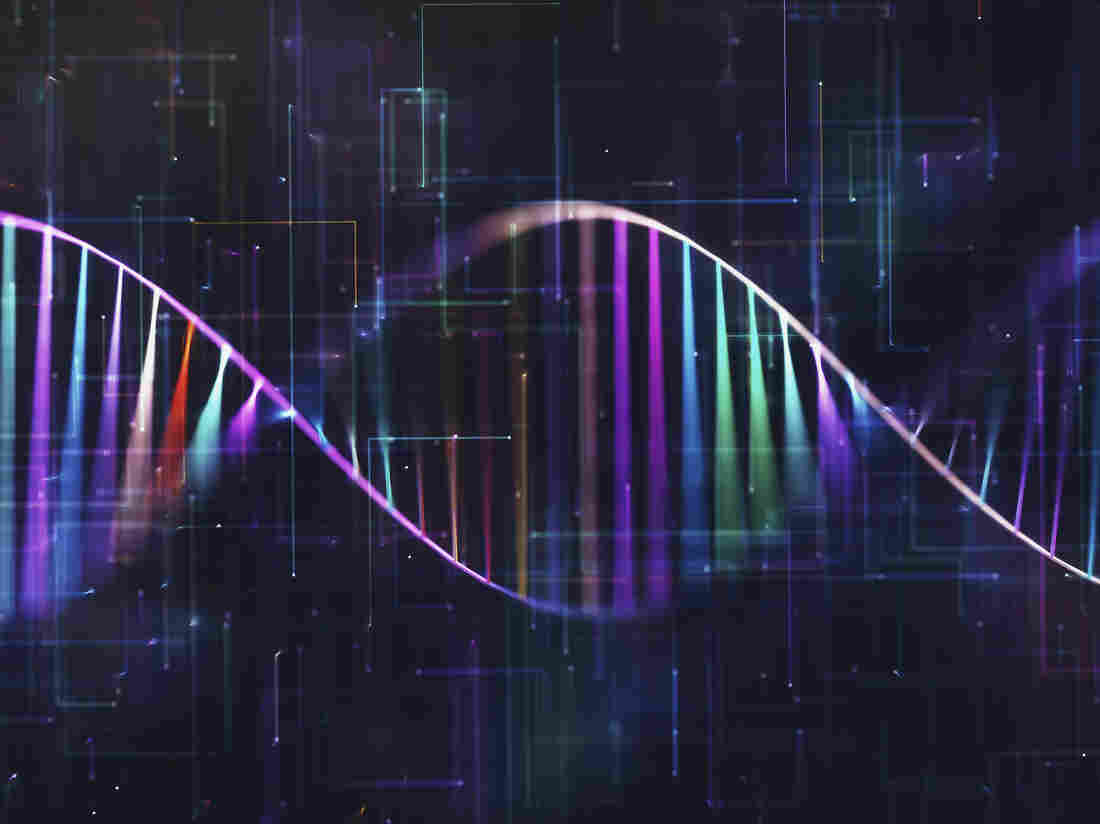 Scientists at the Casey Eye Institute, in Portland, Ore., have have injected a harmless virus containing CRISPR gene-editing instructions inside the retinal cells of a patient with a rare form of genetic blindness. KTSDesign/Science Photo Library/Getty Images hide caption 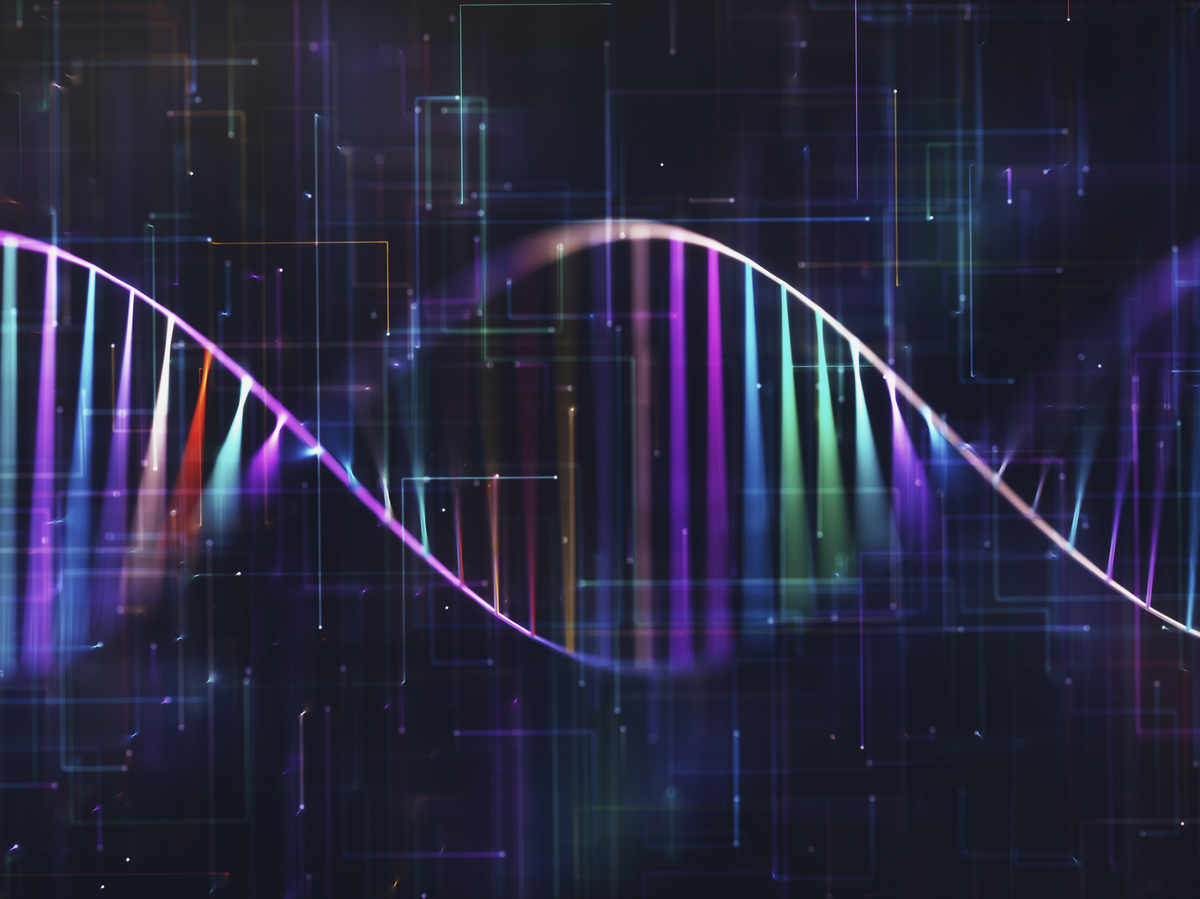 Scientists at the Casey Eye Institute, in Portland, Ore., have have injected a harmless virus containing CRISPR gene-editing instructions inside the retinal cells of a patient with a rare form of genetic blindness.

For the first time, scientists have used the gene-editing technique CRISPR to try to edit a gene while the DNA is still inside a person's body.

The groundbreaking procedure involved injecting the microscopic gene-editing tool into the eye of a patient blinded by a rare genetic disorder, in hopes of enabling the volunteer to see. They hope to know within weeks whether the approach is working and, if so, to know within two or three months how much vision will be restored.

"We're really excited about this," says Dr. Eric Pierce, a professor of ophthalmology at Harvard Medical School and director of the Inherited Retinal Disorders Service at Massachusetts Eye and Ear. Pierce is leading a study that the procedure launched.

"We're helping open, potentially, an era of gene-editing for therapeutic use that could have impact in many aspects of medicine," Pierce tells NPR.

The CRISPR gene-editing technique has been revolutionizing scientific research by making it much easier to rewrite the genetic code. It's also raising high hopes of curing many diseases.

Before this step, doctors had only used CRISPR to try to treat a small number of patients who have cancer, or the rare blood disorders sickle cell anemia or beta-thalassemia. While some of the initial results have been promising, it's still too soon to know whether the strategy is working.

In those other cases, doctors removed cells from patients' bodies, edited genes in the cells with CRISPR in the lab and then infused the modified cells back into the volunteers' bodies to either attack their cancer or produce a protein their bodies are missing.

In this new experiment, doctors at the Casey Eye Institute in Portland, Ore., injected (into the eye of a patient who is nearly blind from a condition called Leber congenital amaurosis) microscopic droplets carrying a harmless virus that had been engineered to deliver the instructions to manufacture the CRISPR gene-editing machinery.

Beginning in infancy, the rare genetic condition progressively destroys light-sensing cells in the retina that are necessary for vision. Vision impairment with LCA varies widely, but most patients are legally blind and are only able to differentiate between light and dark or perhaps to detect movement.

"The majority of people affected by this disease have the most severe end of the spectrum, in terms of how poor their vision is," Pierce says. "They're functionally blind."

The goal is that once the virus carrying the CRISPR instructions has been infused into the eye, the gene-editing tool will slice out the genetic defect that caused the blindness. That would, the researchers hope, restore production of a crucial protein and prevent the death of cells in the retina, as well as revive other cells — enabling patients to regain at least some vision.

"It's the first time the CRISPR gene-editing is used directly in a patient," Pierce says. "We're really optimistic that this has a good chance of being effective."

The study is being sponsored by Editas Medicine, of Cambridge, Mass., and Allergan, based in Dublin. It will eventually involve a total of 18 patients, including some as young as ages 3 to 17, who will receive three different doses.

"We're very excited about this. This is the first time we're doing editing inside the body," says Charles Albright, the chief scientific officer at Editas.

Molecular Scissors Could Help Keep Some Viral Illnesses At Bay

"We believe that the ability to edit inside the body is going to open entire new areas of medicine and lead to a whole new class of therapies for diseases that are not treatable any other way," Albright says.

Francis Collins, director of the National Institutes of Health, calls the advance "a significant moment."

"All of us dream that a time might be coming where we could apply this approach for thousands of diseases," Collins tells NPR. "This is the first time that's being tried in a human being. And it gives us hope that we could extend that to lots of other diseases — if it works and if it's safe."

Pierce, Albright and others stressed that only one patient has been treated so far and that the study, still at a very early stage, is designed primarily to determine whether injecting the gene-editing tool directly into the eye is safe.

To that end, the researchers are starting with lowest dose and the oldest patients, who have already suffered extensive damage to their vision. And doctors are only treating one eye in each patient. All of those steps are being taken in case the treatment somehow backfires, causing more damage instead of being helpful.

"CRISPR has never been used directly inside a patient before," Pierce says. "We want to make sure we're doing it right."

Still, he says, if the underlying defect can be repaired in this patient and others with advanced damage, "we have the potential to restore vision to people who never had normal vision before. It would indeed be amazing."

The study involves a form of Leber congenital amaurosis known as Type 10, which is caused by a defect in the CEP290 gene.

If the approach appears to be safe and effective, the researchers will start treating younger patients.

"We believe children have the potential to have the most benefit from their therapy, because we know their visual pathways are still intact," Albright explains.

The procedure, which takes about an hour to perform, involves making tiny incisions that enable access to the back of the eye. That allows a surgeon to inject three droplets of fluid containing billions of copies of the virus that has been engineered to carry the CRISPR gene-editing instructions under the retina.

The idea is that once there, the CRISPR editing elements would snip out the mutation that causes a defect in CEP290. The hope is that this would be a one-time treatment that would correct vision for a lifetime.

If it works, the volunteers in the study might be able to have the procedure repeated on the other eye later.

"If we can do this safely, that opens the possibility to treat many other diseases where it's not possible to remove the cells from the body and do the treatment outside," Pierce says.

The list of such conditions might include some brain disorders, such Huntington's disease and inherited forms of dementia, as well as muscle diseases, such as muscular dystrophy and myotonic dystrophy, according to Pierce and Albright.

"Inherited retinal diseases are a good choice in terms of gene-based therapies," says Artur Cideciyan, a professor of ophthalmology at the University of Pennsylvania, given that the retina is easily accessible.

But Cideciyan cautions that other approaches for these conditions are also showing promise, and it remains unclear which will turn out to be the best.

"The gene-editing approach is hypothesized to be a 'forever fix,' " he says. "However, that's not known. And the data will have to be evaluated to see the durability of that. We'll have to see what happens."