Accessibility links
Face Masks: Not Enough Are Made In America To Deal With Coronavirus : Shots - Health News A global shortage of face masks is prompting concern for the safety of health care workers. Now the U.S. government is trying to bring back an industry that largely left the country years ago. 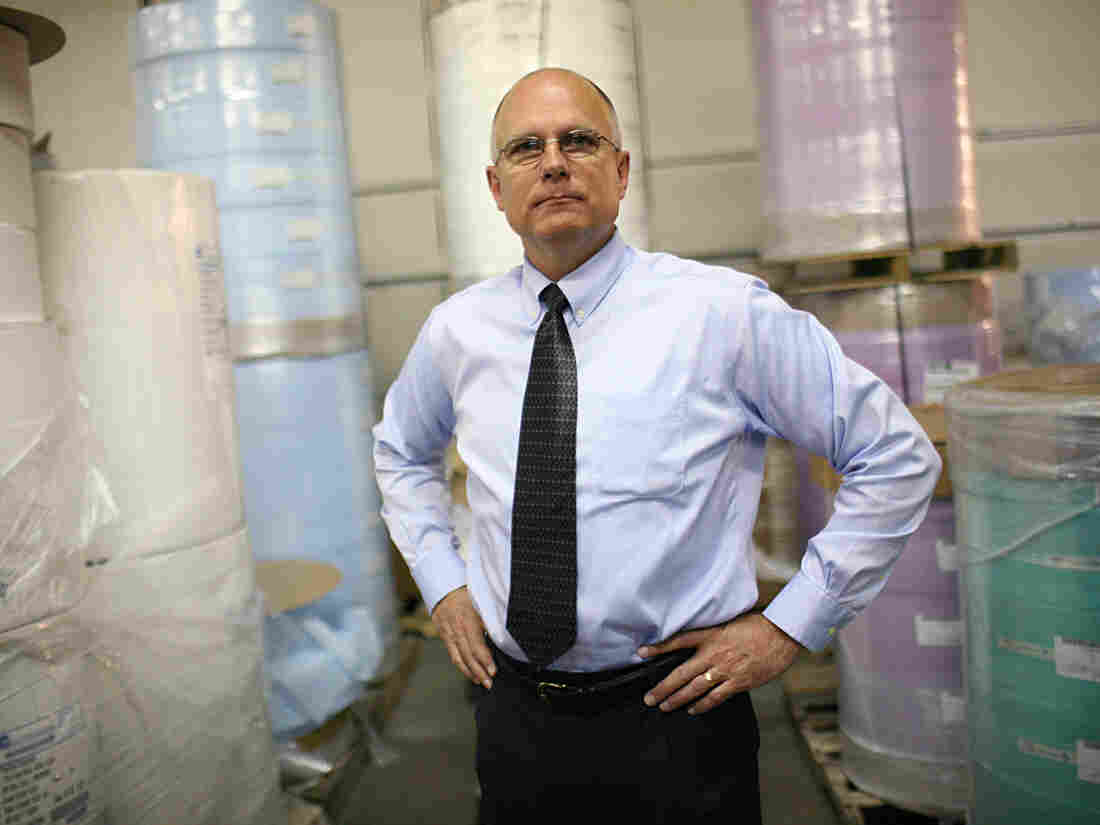 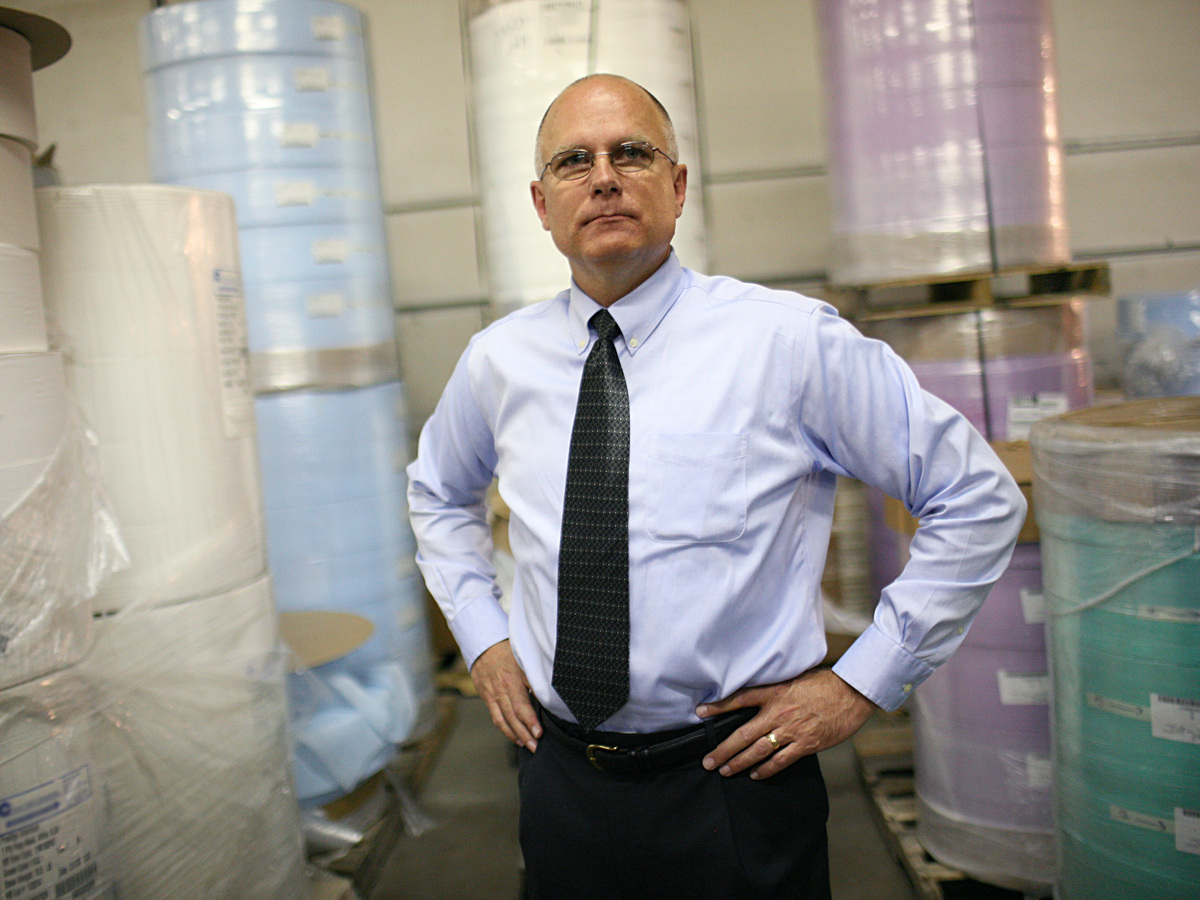 Prestige Ameritech Executive Vice President Mike Bowen, pictured in 2009, says his company can't keep up with demand for face masks used by doctors and nurses amid the coronavirus outbreak.

He's executive vice president of Texas-based Prestige Ameritech, one of the few manufacturers of respirators and surgical face masks still making them in the United States.

Since the coronavirus started spreading in January, Bowen says he's gotten at least 100 calls and emails a day.

Bowen is at the center of a major problem that the coronavirus has made crystal clear: There aren't enough domestic manufacturers for critical medical supplies such as face masks. And even if production ramps up, it's unlikely to be enough in the current outbreak.

Usually, businesses want orders to spike — they hope customers line up for their products.

But Bowen is not pleased.

His company simply can't keep up with demand. 3M — one of the biggest mask makers — is in the same predicament. It says it's stepping up production at its factories around the world, but it can't fulfill all the new orders.

The World Health Organization this week warned against hoarding and panic-buying of critical protective gear.

"Without secure supply chains, the risk to health care workers around the world is real," WHO Director-General Dr Tedros Adhanom Ghebreyesus said. "Industry and governments must act quickly to boost supply, ease export restrictions and put measures in place to stop speculation and hoarding."

Concern about shortages of face masks used by doctors and nurses is prompting hospitals around the world to clamor for medical supplies as the coronavirus continues its infectious spread.

In response, the Trump administration is looking at ways to rapidly expand domestic production, but the economics of the face-mask business makes that difficult.

This is a cycle familiar to Bowen. During what he calls "peacetime," when there are no outbreaks, there are few buyers of masks. During an epidemic, there's suddenly limitless demand.

"Imagine if, all at once, millions of people wanted to skateboard," Bowen says.
"The skateboarding industry is not set up for spikes like that, and neither is the mask-making industry." 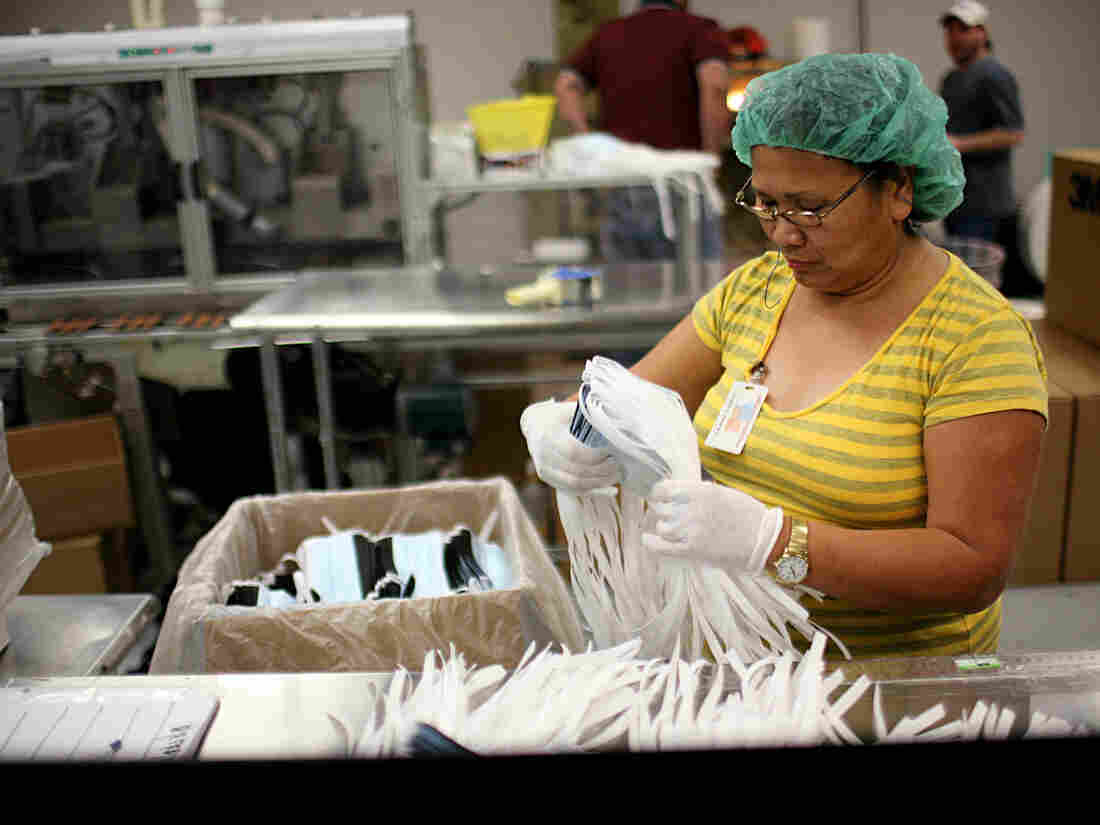 A Prestige Ameritech employee inspects disposable surgical masks in 2009 at the company's Texas factory. The company is one of the last domestic manufacturers of medical face masks. Tom Pennington/Getty Images hide caption 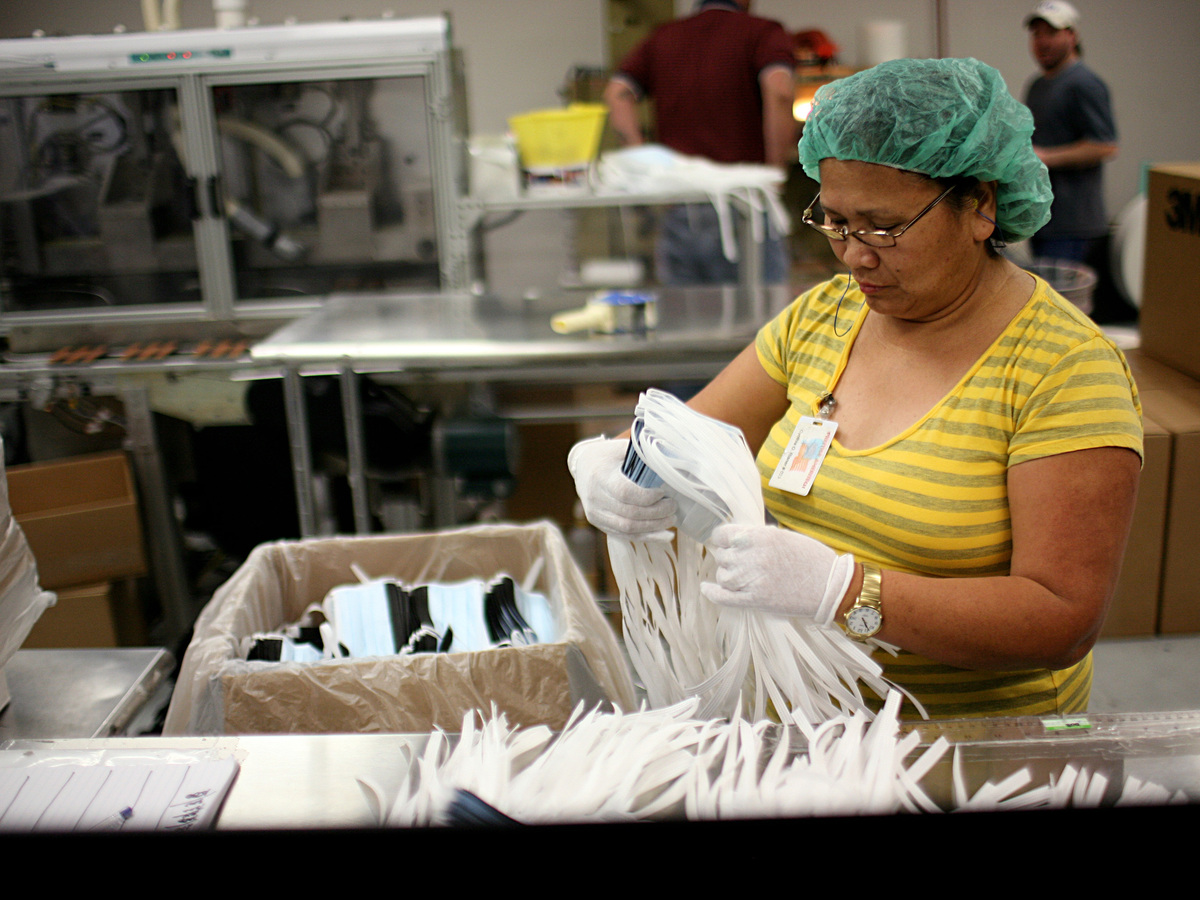 A Prestige Ameritech employee inspects disposable surgical masks in 2009 at the company's Texas factory. The company is one of the last domestic manufacturers of medical face masks.

Prestige Ameritech, for example, owns a limited number of machines that assemble, sew and shape the masks. A decade ago, it ramped up production in response to the swine flu outbreak by buying more machines and hiring 150 new workers.

"We made a really big mistake," Bowen says of that decision. It took about four months to build the new machines, which are as long as a school bus and cost as much as $1 million.

By the time they were ready, the swine flu crisis had ended, demand vaporized, and Prestige Ameritech almost went bankrupt. "One day — and it is literally almost like one day — it just quits. The demand is over, the phones stop ringing," Bowen says.

To make matters worse, the hospitals and medical supply companies suddenly had a glut of masks; they stopped buying for months.

That was a business headache. But the recent shortages also show how a lack of steady orders can create a sudden national security risk.

The seeds of that problem, says Bowen, can be traced back 15 years. That's when many mask factories moved overseas, where masks could be made at a fraction of Bowen's costs.

Most notably, he says, Kimberly-Clark, which used to be one of the industry leaders, moved its operations.

"The surgical mask supply went from being 90% U.S.-made to being 95% foreign-made in literally one year," Bowen says.

For years, Bowen tried to get the government to pay attention to this issue. He wrote letters to Presidents Obama and Trump, warning that an epidemic could prompt China to stop exporting its supply, leaving American health care in a bind.

He wanted the U.S. government to mandate that hospitals buy more American-made products.

"If every hospital would pay just a few cents more for a mask, there wouldn't be an issue here," he says.

The coronavirus is proving Bowen right. Now, he has the administration's attention.

The Strategic National Stockpile is essentially the country's emergency medicine cabinet, with reserves of vaccines and medical supplies stowed in warehouses around the country.

5 Ways To Prevent And Prepare For The Coronavirus

Steven Adams, the stockpile's acting director, says the government now realizes it needs more mask factories in the U.S. "Coronavirus has made the theoretical risks seem far more real, I think, to most of us," he says.

The government is looking to buy half a billion domestically made medical masks — a purchase that will take months or years to receive, after this crisis passes.

"Our hope is that this can be a step and start moving the balance back toward a greater percentage being produced in the U.S.," Adams says. And he hopes it will also better prepare the country for the next outbreak.