Accessibility links
Coronavirus Spread Spurs Debate Over Which Health Workers Need To Be Quarantined : Shots - Health News Should "potential exposure" by a health worker to someone with coronavirus be enough to send that worker home for two weeks of self-quarantine? Health systems have begun debating relative risks. 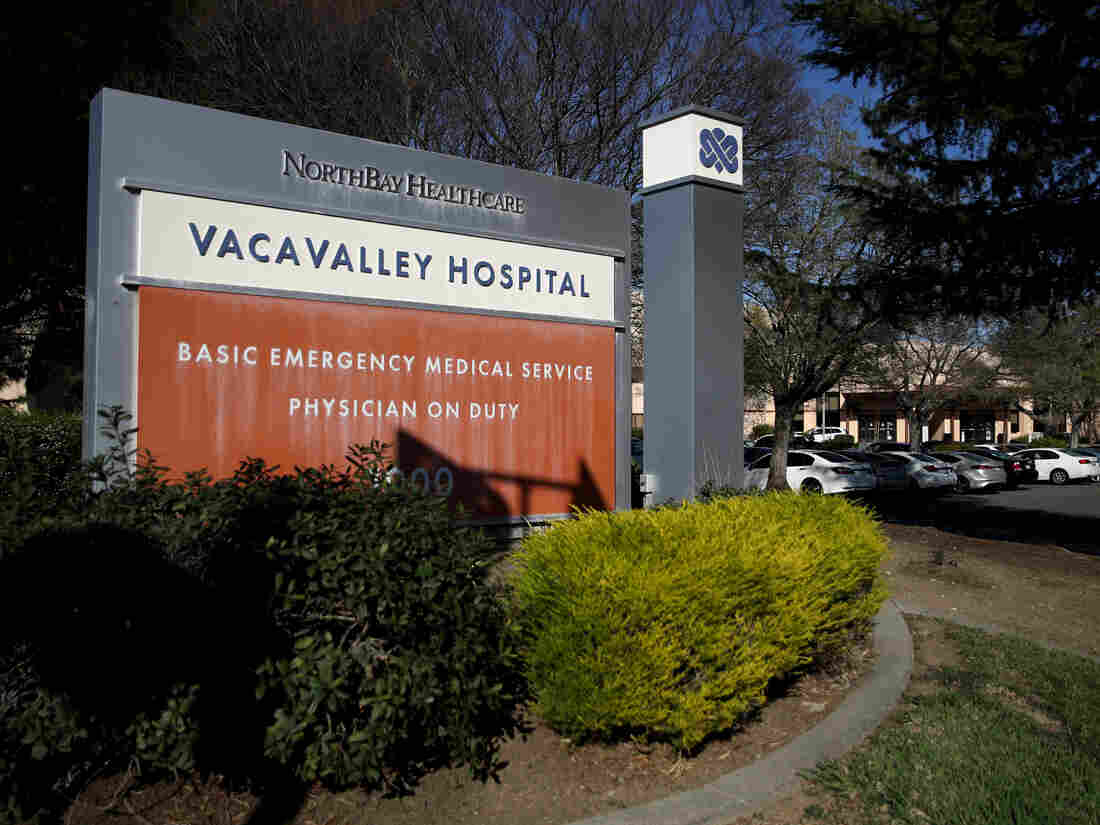 After a coronavirus test came back positive on a patient who had been treated at NorthBay VacaValley Hospital in Vacaville, Calif., in February, about 100 NorthBay workers were sent into self-quarantine for 14 days. Justin Sullivan/Getty Images hide caption 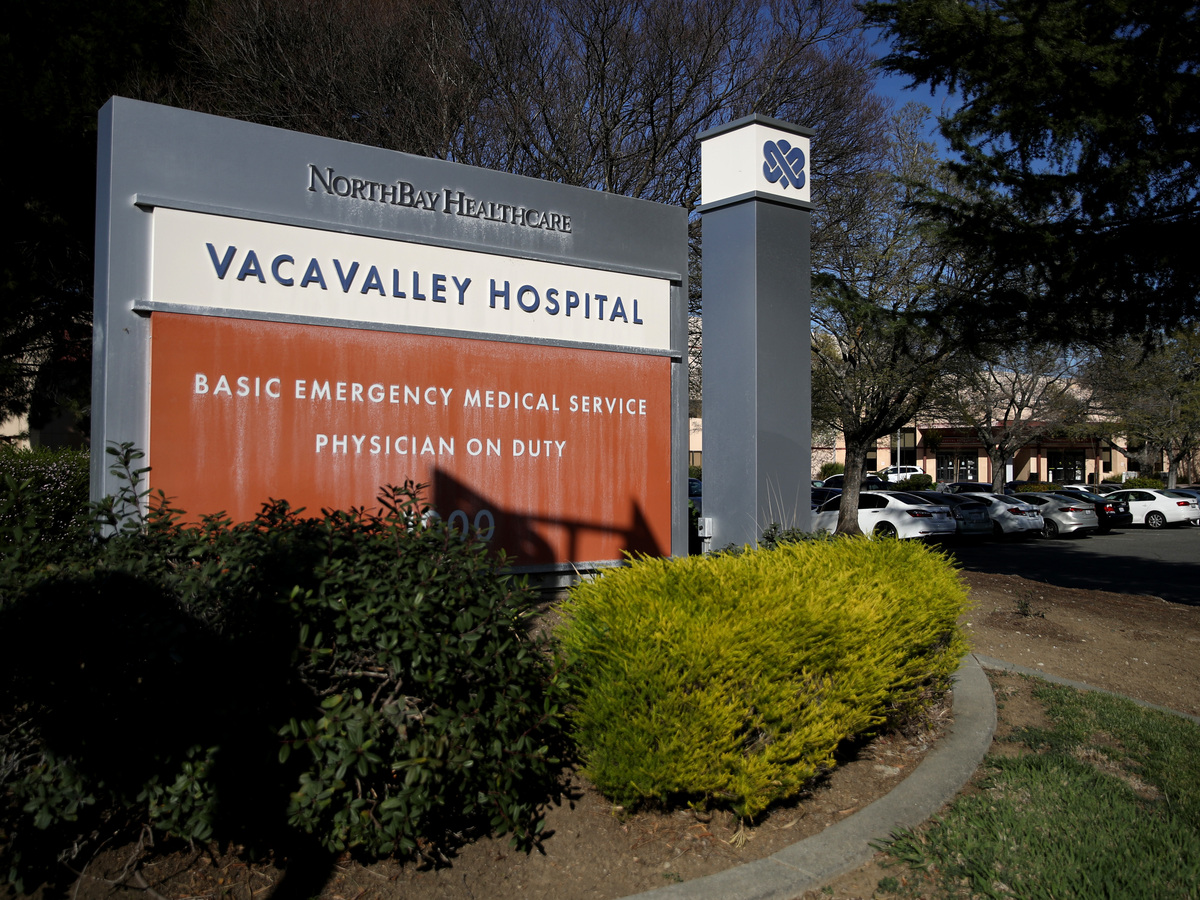 After a coronavirus test came back positive on a patient who had been treated at NorthBay VacaValley Hospital in Vacaville, Calif., in February, about 100 NorthBay workers were sent into self-quarantine for 14 days.

As the U.S. battles to limit the spread of the contagious new coronavirus, the number of health care workers ordered to self-quarantine because of potential exposure to an infected patient is rising at a rapid pace. In Vacaville, Calif., alone, one case — the first documented instance of community transmission in the U.S. — left more than 200 hospital workers under quarantine and unable to work for weeks.

Across California, dozens more health care workers have been ordered home because of possible contagion in response to more than 80 confirmed cases as of Sunday morning. In Kirkland, Wash., more than a quarter of the city's fire department was quarantined after exposure to a handful of infected patients at the Life Care Center nursing home.

With the number of confirmed COVID-19 cases growing by the day, a continued quarantine response of this magnitude would quickly leave the health care system short-staffed and overwhelmed. The situation has prompted debate in the health care community about just what standards medical facilities should use before ordering workers quarantined — and what safety protocols need to become commonplace in clinics and emergency rooms.

Jennifer Nuzzo, a senior scholar at the Johns Hopkins Center for Health Security, is among those arguing hospitals need to change course.

"It's just not sustainable to think that every time a health care worker is exposed they have to be quarantined for 14 days. We'd run out of health care workers," Nuzzo says. Anyone showing signs of infection should stay home, she adds, but providers who may have been exposed but are not symptomatic should not necessarily be excluded from work.

The correct response, she and others say, comes down to a careful balance of the evolving science with the need to maintain a functioning health care system.

While hospitals are supposed to be prepared for just such a situation, Nuzzo says, their plans often fall short. "Absent any imminent public health crisis, it may not be one of their priorities," she says. From 2003 to 2019, federal funding for the Hospital Preparedness Program in the U.S. was cut almost in half.

In Northern California, potential exposure to the new coronavirus was exacerbated because hospitals were caught unaware by the community spread of the virus and hampered by federal protocols that initially limited diagnostic testing to patients with a history of travel to a country where the virus was known to be circulating or contact with a person with a known infection.

"At the very beginning [of an outbreak] this will happen because you don't know patients are infected and you only realize later that people were exposed," says Grzegorz Rempala, a mathematician at the College of Public Health at Ohio State University who models the spread of infectious diseases.

Now that the disease has started to spread through the community, any patient with respiratory symptoms potentially could be infected, though health officials note the likelihood remains low. As providers start routinely wearing protective gear and employing strict safety protocols, accidental exposure should decline.

The Vacaville case offers stark insight into the fallout from the narrow testing protocols initially established by the Centers for Disease Control and Prevention. When a woman was admitted to NorthBay VacaValley Hospital with respiratory symptoms on Feb. 15, dozens of hospital workers walked in and out of her room performing daily tasks. Days later, as her condition worsened, she was sent to the University of California, Davis Medical Center, where dozens more employees were potentially exposed.

Because the woman did not meet the testing criteria in place at the time, it took days for UC Davis to get approval to have her assessed for the coronavirus. After the test came back positive, about 100 NorthBay workers were sent into self-quarantine for 14 days. At UC Davis, an additional 36 nurses and 88 other employees were quarantined, according to the unions representing those workers. (A spokesman for UC Davis says the figures were not accurate but declined to give an estimate.)

"We're not used to being concerned, before we even do the triage assessment, [about] whether the patient is infectious and could infect hospital workers," says Dr. Kristi Koenig, the EMS medical director of San Diego County. But that thinking started to change, she says, during the 2014 Ebola outbreak. Hospitals should routinely mask patients who come in with respiratory symptoms, she says, given any such patient could have an infectious disease such as tuberculosis.

Yet providers don't often think in those terms. "In many ways we're spoiled because we've gone from a society 50 or 100 years ago where the major killers were infectious disease," says Dr. Michael Wilkes, a professor at UC Davis School of Medicine. "Now we've become complacent because the major killers are heart disease and diabetes."

Faced with this new infection risk, many hospitals are scrambling to retrain workers in safety precautions, such as how to correctly don and doff personal protective equipment.

Sutter Health, which has 24 hospitals in Northern California, started ramping up its emergency management system five weeks ago in preparation for COVID-19. Before coming to the emergency room, Sutter patients are asked to call a hotline where they are assessed by a nurse or an automated system designed to screen for symptoms of the virus. Those with likely symptoms are guided to a telemedicine appointment unless they need to be admitted to a hospital.

Anyone arriving at a Sutter emergency room with signs of a respiratory infection is given a mask and sequestered. "A runny nose and a cough doesn't tell you much. It could be a cold, it could be a flu, and in this weather it could be allergies," says Dr. Bill Isenberg, Sutter's chief quality and safety officer. A doctor or nurse in protective equipment — including N95 mask, gown and goggles — is deployed to assess the patient's symptoms. If COVID-19 is suspected, the patient is moved into a private room.

Sutter has treated several coronavirus patients who arrived from Travis Air Force Base, which housed evacuees from the Diamond Princess cruise ship quarantined off the coast of Japan after an outbreak was detected onboard. The Sutter patients were placed in negative pressure rooms so that contaminated air did not circulate to the rest of the hospital, and staff used an anteroom to take off gowns and masks.

"We do everything humanly possible to minimize the number of people who have to enter [the room]," Isenberg says. Still, he says, some workers have been quarantined; Sutter would not disclose the total.

Not all hospitals are adapting so quickly. National Nurses United, a union representing more than 150,000 nurses, recently held a news conference to call on hospitals to better protect their workers. Of the 6,500 nurses who participated in a survey the union circulated, fewer than half said they had gotten instruction in how to recognize and respond to possible cases of COVID-19. Just 30% said their employer has sufficient protective equipment on hand to protect staff if there were a surge in infected patients.

As the virus continues to spread, hospitals should be stockpiling such equipment, figuring out how to add beds and planning for staffing shortages, says Dr. Richard Waldhorn, a professor of medicine at Georgetown University and contributing scholar at Johns Hopkins who recently co-authored recommendations for hospitals on how to prepare for a COVID-19 pandemic.

Hospitals should already be training providers to take on expanded duties, Waldhorn says. If a hospital becomes overwhelmed, the Medical Reserve Corps can be mobilized, as can networks of providers who have volunteered to aid in emergency situations. Once workers have been infected and recover, it might make sense to have them treat other coronavirus patients since they likely will have immunity.

Eventually, as a disease becomes widespread, quarantine simply stops being a priority, says Nina Fefferman, a mathematician and epidemiologist at the University of Tennessee-Knoxville.

"There's a point where we stop trying to quarantine anyone and we just say, OK, we're going to have more deaths from the fire department not being able to fight fire than from everyone getting the disease."