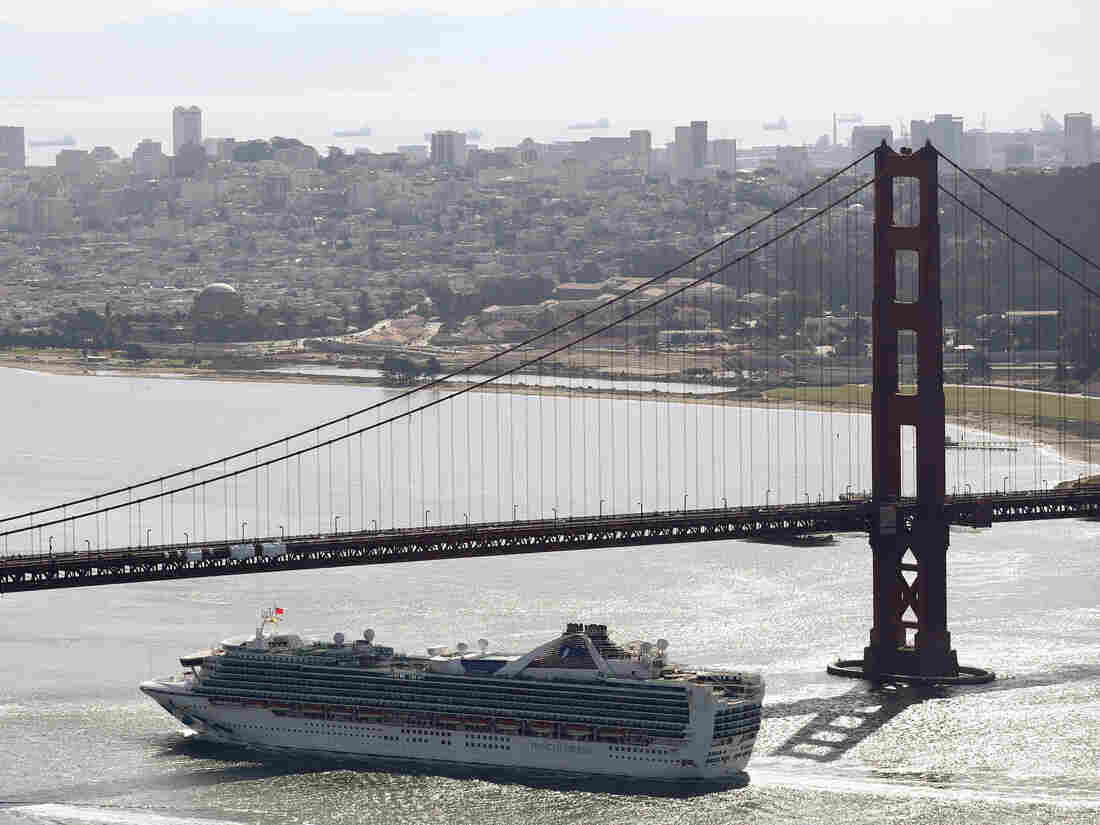 The Grand Princess cruise ship heads under the Golden Gate Bridge to a port in Oakland, Calif., on Monday. The ship's more than 2,400 passengers are headed to either medical care or a quarantine due to the coronavirus. Ezra Shaw/Getty Images hide caption 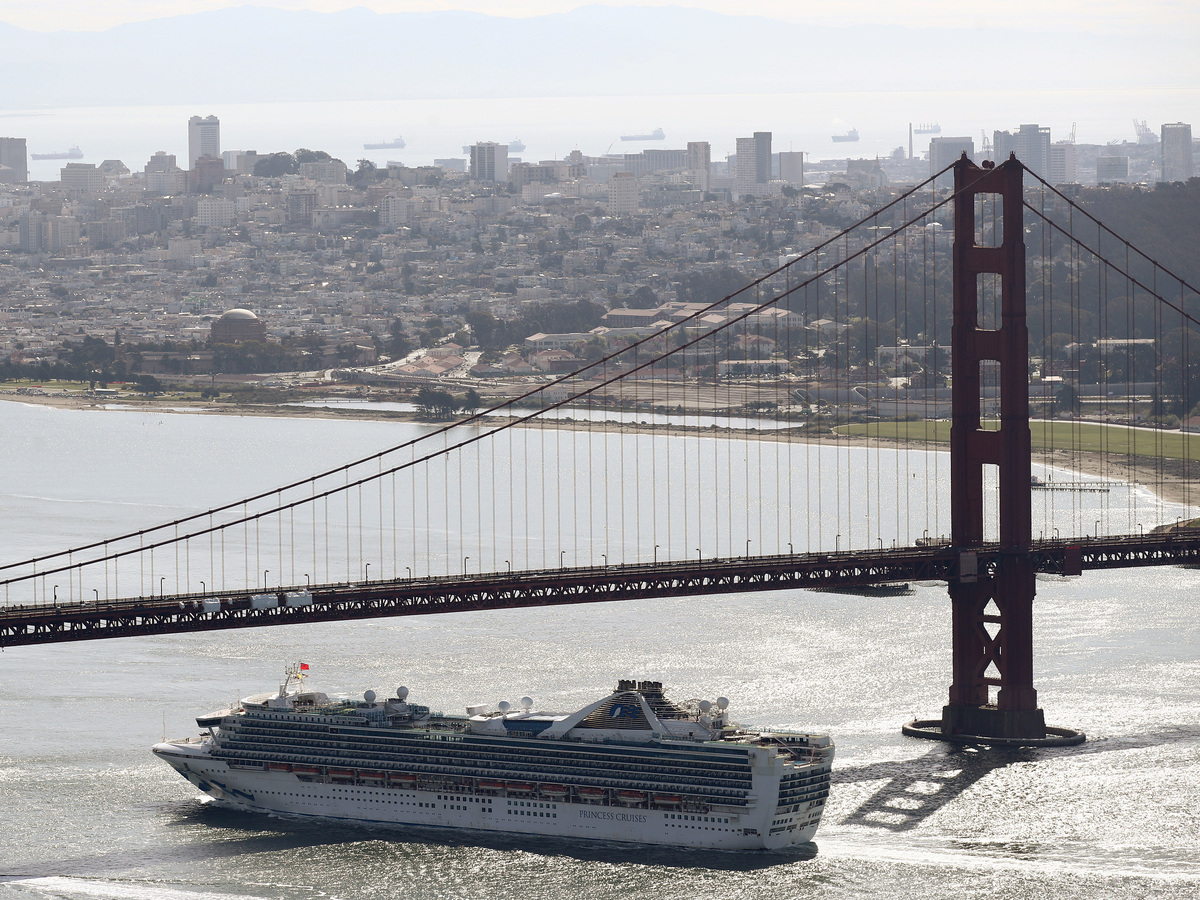 The Grand Princess cruise ship heads under the Golden Gate Bridge to a port in Oakland, Calif., on Monday. The ship's more than 2,400 passengers are headed to either medical care or a quarantine due to the coronavirus.

After several days of circling off the coast of California, the Grand Princess cruise ship has docked at a port in Oakland.

The ship has 3,533 people on board — including at least 21 who have tested positive for the new coronavirus, out of 46 people who were in the first round of testing.

It is unclear how many people will be allowed to disembark on Monday but the cruise ship company said that "guests who require acute medical treatment and hospitalization" would be first. The process is expected to take multiple days.

During a news conference on Monday afternoon, Vice President Pence said passengers who live in California will be moved to two military bases in the state, while passengers from other states will be transported to bases in Georgia and Texas. International travelers from Canada and the United Kingdom will be taken to board special charter flights home, he said.

More than 1,000 crew members aboard the ship will be tested and quarantined on the vessel. Plans for a crew quarantine are still being determined, the company said in a statement.

The coronavirus that causes COVID-19 spreads easily, and there's essentially no immunity to it among the human population — prompting a top U.S. health official to say Monday, "Many people in the United States will at some point in time, either this year or next, be exposed to this virus." But Dr. Nancy Messonnier, director of the National Center for Immunization and Respiratory Diseases, also said that only a fraction of those exposures will likely result in a serious illness.

Of those who are exposed to the coronavirus, "there's a good chance many will become sick," Messonnier said in a briefing about the coronavirus. She added, "Based on what we know about this virus, we do not expect most people to develop serious illness."

A recent World Health Organization report on more than 70,000 cases in China found that 80% of COVID-19 cases were mild to moderate, with people over age 60 being the most likely to develop a serious case.

"This virus is capable of spreading easily and sustainably from person to person," Messonnier said.

The number of people with the coronavirus in the U.S. more than doubled over the weekend, from 260 on Friday to more than 600 on Monday, causing school closures and other disruptions to daily life as the virus spread to new parts of the country.

Financial markets have been rattled by the outbreak and a shake-up in the oil market, and trading on the New York Stock Exchange was halted for 15 minutes Monday morning when the S&P 500 index plummeted 7% just minutes after the open of business.

Worldwide, there are more than 110,000 COVID-19 cases, including more than 7,000 each in South Korea, Italy and Iran, according to a dashboard created by Johns Hopkins University's Whiting School of Engineering. France, Germany and Spain are now reporting more than 1,000 cases each.

Local transmission of the disease has now been reported in at least 56 countries.

Trump had wanted Grand Princess passengers to stay on board

The Grand Princess had been sailing in circles off the coast since late last week after a passenger from a recent trip died from COVID-19 in Placer County, Calif. At least one other case, in Nevada, has been linked to that same voyage.

The passengers will be taken off the ship despite previous comments by President Trump, who said on Friday that he would prefer to have all of them stay on board, because the arrival of more infected people on U.S. soil would raise the country's case total.

"I'd rather have the people stay," Trump said, while also noting that he left the final decision in the hands of his administration's coronavirus task force.

"I would rather — because I like the numbers being where they are — I don't need to have the numbers double because of one ship that wasn't our fault," Trump said.

In response to a reporter's question about that statement, the president said he was not making coronavirus numbers — and the potential to minimize the size of the U.S. outbreak — a higher priority than treating the sick.

"No," Trump said. "I'm saying whatever it is that takes precedence over the numbers."

Trump then repeated that he liked the then-current figure, of 240 cases in the U.S.: "I would rather have the numbers stay where they are. But if they want to take them off, they'll take them off."

When 2,422 passengers finally get off the ship, a small number will go to hospitals for urgent care. The remainder will be divided into several groups, depending on where they're from. In addition to Americans, more than 50 nationalities are represented on board, according to Princess Cruise Lines.

The infected people on the Grand Princess include two passengers and 19 crew members. But while the ship's guests will begin disembarking on Monday, nearly all of its 1,111 crew members will remain on board and sail back out of San Francisco Bay.

"Plans for a crew quarantine are still being determined," Princess Cruise Lines said.

It will likely take days to accomplish the complicated task of getting passengers off the ship, NPR's Eric Westervelt reports for Morning Edition.

"Californians are going to be taken to one of two military bases, one north, one south" in the state, Westervelt says.

"Depending on where they're from, other U.S. citizens are going to be taken to bases in Georgia and Texas. All will undergo a two-week quarantine. And then there are hundreds of foreign passengers. The State Department's helping to get chartered flights for them. Canada's sending a plane to collect 200 of its citizens."

"U.S. citizens, especially with underlying conditions, should not travel by cruise ship," the State Department said on Sunday.

"As the outbreak of COVID-19 continues, there remains a risk of infected travelers and crew boarding cruise ships," the Centers for Disease Control and Prevention said.

Officials in Dublin, Ireland, have canceled the upcoming St. Patrick's Day parade over concerns that the large celebration could help the coronavirus spread. Ireland currently has at least 21 cases of the virus, while Northern Ireland has 12.

County Cork and other areas with large parades are also calling off their parties.

"The St Patrick's Day celebrations are a cornerstone of the Irish tourism calendar," the Dublin Chamber of Commerce said in a statement. While calling the decision to cancel the outdoor parties a "huge disappointment," the statement added that the move reflected "the seriousness of the current situation."

Olympics officials have said the summer games in Tokyo will go ahead as planned — but COVID-19 has forced a change to the traditional passing of the Olympic flame in Greece, where there are 84 coronavirus cases.

"The torch-lighting ceremony takes place in ancient Olympia in southern Greece — an area where the most coronavirus cases have been confirmed," Joanna Kakissis reports from Athens for NPR's Newscast. "Thousands often gather on the grassy slopes to watch. But this year, only official Olympics representatives will be allowed to attend the dress rehearsal on March 11 and the formal torch-lighting on March 12."

And in the U.S., the coronavirus recently forced organizers of the popular South by Southwest conference to call off this year's event.

Those are in addition to other sports events, school trips, conventions and gatherings that have been canceled over worries about the community spread of the coronavirus.

To prevent the coronavirus from spreading, the CDC recommends washing hands with soap and water for at least 20 seconds or using a hand sanitizer if a sink isn't available. The World Health Organization says people should wear face masks only if they're sick or caring for someone who is.

Shortness of breath occurred in nearly 20% of cases, and about 13% had a sore throat or headache, the WHO said.