Accessibility links
Contact Tracing: How It Works And How It's Helping Slow Coronavirus : Shots - Health News It involves making a very long list and a LOT of phone calls. Disease detection is drudgery but it's vital to public health. 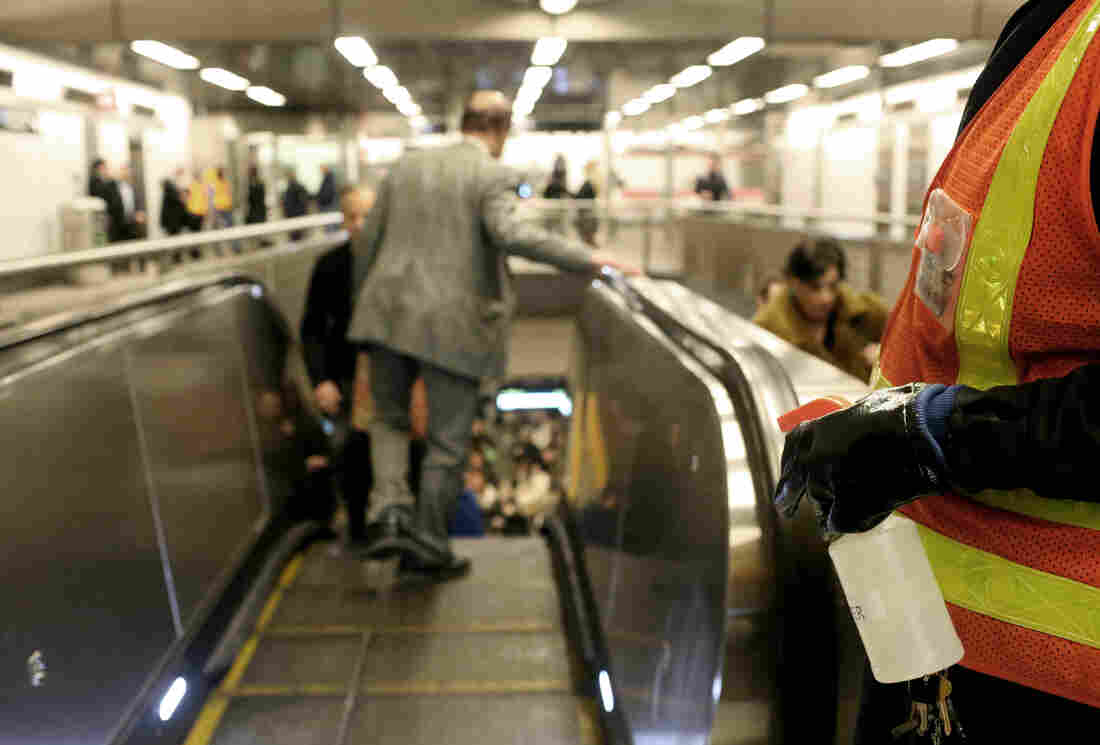 When someone tests positive for COVID-19, epidemiologists make detailed lists of everyone they may have had contact with in their daily life and reach out to those people. Yana Paskova/Getty Images hide caption 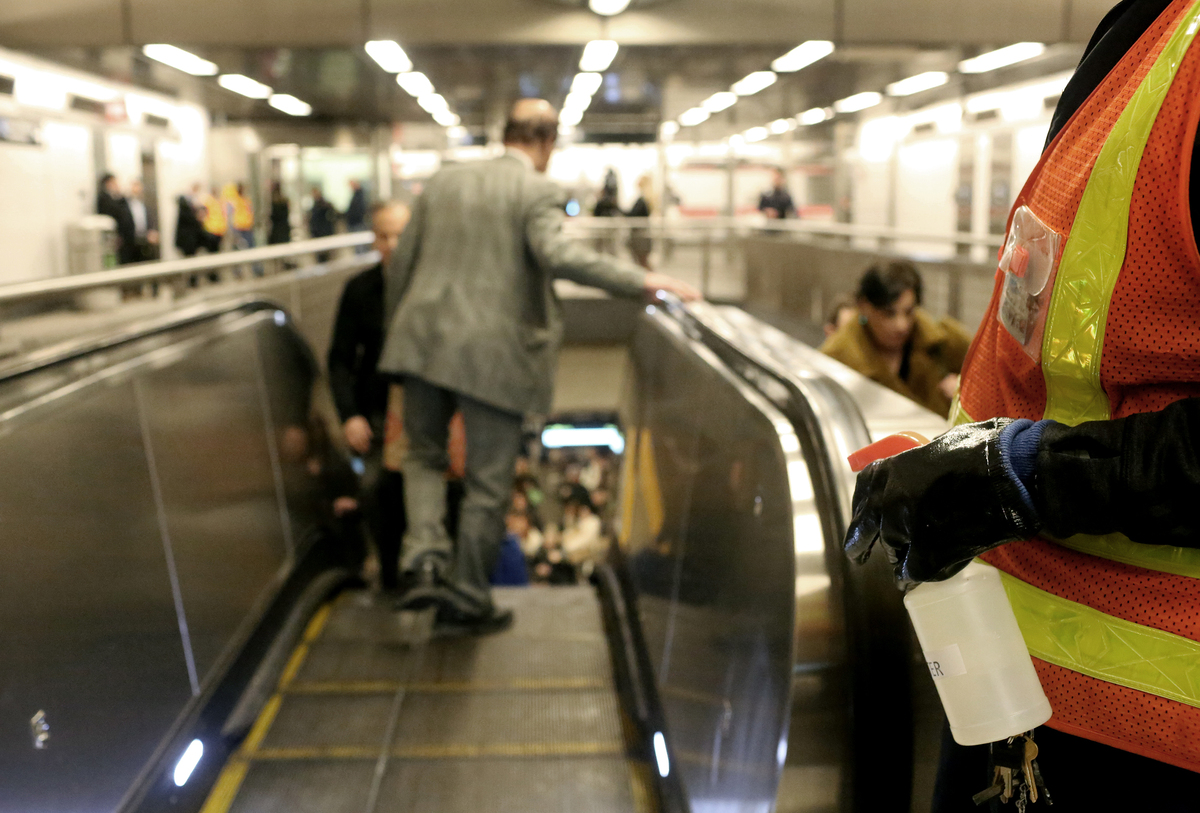 When someone tests positive for COVID-19, epidemiologists make detailed lists of everyone they may have had contact with in their daily life and reach out to those people.

When I was a fourth-year medical student, I did a month-long rotation at the Centers for Disease Control and Prevention in Atlanta. My first task was decidedly unglamorous: I sat in a cubicle and crunched data about fungal infections caused by contaminated contact lens solution.

So when my supervisor asked one afternoon if I wanted to help investigate a disease outbreak, I jumped at the chance. My task would be to track down people who had been in direct contact with mumps patients, work known as contact tracing..

There was a cluster of travel-related mumps cases in the Midwest. I immediately envisioned jetting around America's heartland, swabbing people in hospitals and sampling the ductwork of airplanes — or at least, leaving the office.

Instead, I ended up in another cubicle on a different floor, cold calling an entire subdivision's residents to ask scripted questions about fever and neck swelling, a telltale symptom of mumps.

Contact tracing can feel like drudgery, but in an outbreak, it's vital to public health. During events like the current COVID-19 outbreak, it helps make possible early diagnosis and getting care to people who need it. The information it uncovers also helps public health authorities contain epidemics.

For clusters of new or poorly understood disease, the contact information can shed light on how a disease is spread.

Here's how it works. Epidemiologists, or "disease detectives," start with the index patient, sometimes called "patient zero." Depending on what they already know about that patient's condition — how the disease is spread, its natural history, what symptoms it causes — they interview the patient to learn about their movements and identify all close contacts. Sometimes, they ask the index patient to give a detailed history of where they have traveled, eaten, slept, and bathed.

On the basis of the answers, public health workers may contact the management of airlines, restaurants, hotels, hot tubs, shopping centers, public transit, and other public spaces where the index patient might have had contact with others while they were sick. They review passenger manifests, reservation logs, and other records — sometimes even surveillance tapes — to compile exhaustive lists of people potentially exposed to patient zero.

These lists become the basis of an enormous amount of outreach work in the early days of an outbreak. Public health workers contact each of these people to explain their risk, offer screening for the infection and conduct regular monitoring for symptoms of the infection.

In the U.S., that outreach often happens by phone. In some cases of mass exposure to a concerning infection, as in the measles outbreak originating at Disneyland in 2015, media advisories are sometimes used. In other situations, the outreach may take place in person, as much of it did during the Ebola outbreak that started in West Africa in 2014.

In some cases, public health authorities may offer preventive advice or treatment for the infection. They may tell these contacts to isolate themselves at home, as many COVID-19 patients have been asked to do. And if one of these contacts turns out to have the disease of interest, they become the focus of the same cycle of identifying and reaching out to contacts.

Contacts can add up fast, depending on how infectious the disease is and the environment in which it is spreading: even a moderately infectious disease like the seasonal flu can spread like wildfire in a crowded environment full of susceptible people, like a classroom or a subway car. And the higher the number of contacts, the more outreach work needs to be done to trace them.

If epidemic spread outpaces contact tracing efforts, cases may begin popping up outside of the chain of transmission, as they have recently done in several states. That raises the concern that contact tracing is not enough — or is too late — to contain the epidemic.

But the detective work can still help.

"Even if there's a widespread epidemic where you don't know your transmission chain, contact tracing still adds value," says Ranu Dhillon, an instructor and physician in the Division of Global Health Equity at the Brigham and Women's Hospital in Boston. Infected people still get identified and isolated early, which slows the spread of the disease.

But contact tracing is expensive — and if it's not actually containing the disease, public health experts may add, and perhaps prioritize, broader community measures like widespread screening and travel restrictions.

In early March, when a resident of New Rochelle, N.Y., was diagnosed with COVID-19 infection, a robust contact tracing effort led officials to not only recommend self-quarantine for his infected family members, but also to close his children's schools, his synagogue, and the law school of a student who had contact with the case.

On Tuesday, the governor of New York announced a "containment zone" would be created in a one-mile radius around the synagogue that seems to be the epicenter of the outbreak. The containment plan does not include travel restrictions or road closures, but does include closures of schools and large gathering areas and a National Guard deployment to carry out school cleanings, as well as food deliveries meant to enable people to limit their movements.

These responses can often make a difference in the dynamics of an outbreak when it happens early enough: During the Ebola outbreak in West Africa, the early rollout of such measures alongside contact tracing efforts in Liberia may have played a role in the rapid decline of the country's cases in September 2014.

In Seattle and in California, contact tracing for COVID-19 cases continues while mitigation measures are being initiated, said Nancy Messonnier, director of the CDC's National Center for Immunization and Respiratory Diseases, in a media briefing Monday. Those mitigation measures include canceling or limiting large gatherings, including sporting events, closing schools, and other social distancing measures.

When there are many unknown transmission chains, or when communities don't cooperate with public health efforts, the value of contact tracing really takes a dip, says Dhillon. And when there are many contacts who are geographically widespread — as is often the case in our globalized society — it can become impossible for contact tracing to keep pace with the epidemic.

Although epidemiologists have tried to develop mathematical models to understand when the costs of contact tracing outweigh its benefits, there is no real formula for determining when an outbreak has become too widespread for contact tracing to be of use, or when to switch from contact tracing to community mitigation measures.

In practicality, public health authorities often end up doing both at the same time: "It's not an on-off switch, it's a dimmer," said Messonnier.

It often falls to local and regional health commissioners and other public health leaders to make the call, says Dhillon. And when they're in uncharted waters, as they are with COVID-19, "those are not easy judgments," he says, "and honestly, you're not going to know if you're really right. You have to take all the evidence you have and make the best judgment you can."