Accessibility links
Reclaim Downtime: It's OK To 'Do Nothing,' Says Celeste Headlee : Shots - Health News As many Americans start thinking about what a self-quarantine might look like, author Celeste Headlee has some advice: Put down your phone. Her book explains how we're "overdoing and underliving." 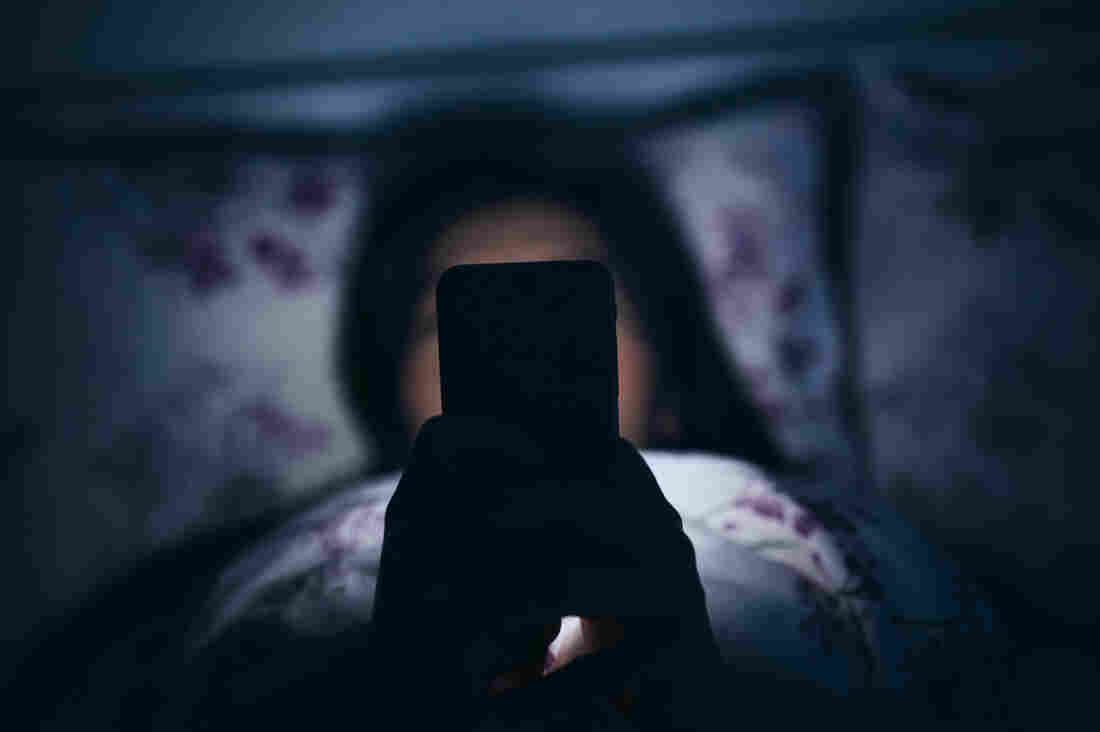 "Your brain doesn't distinguish between the work that you do at your job and paging through Facebook while you're in bed," says author Celeste Headlee. "To your brain, you're still working." Yiu Yu Hoi/Getty Images hide caption 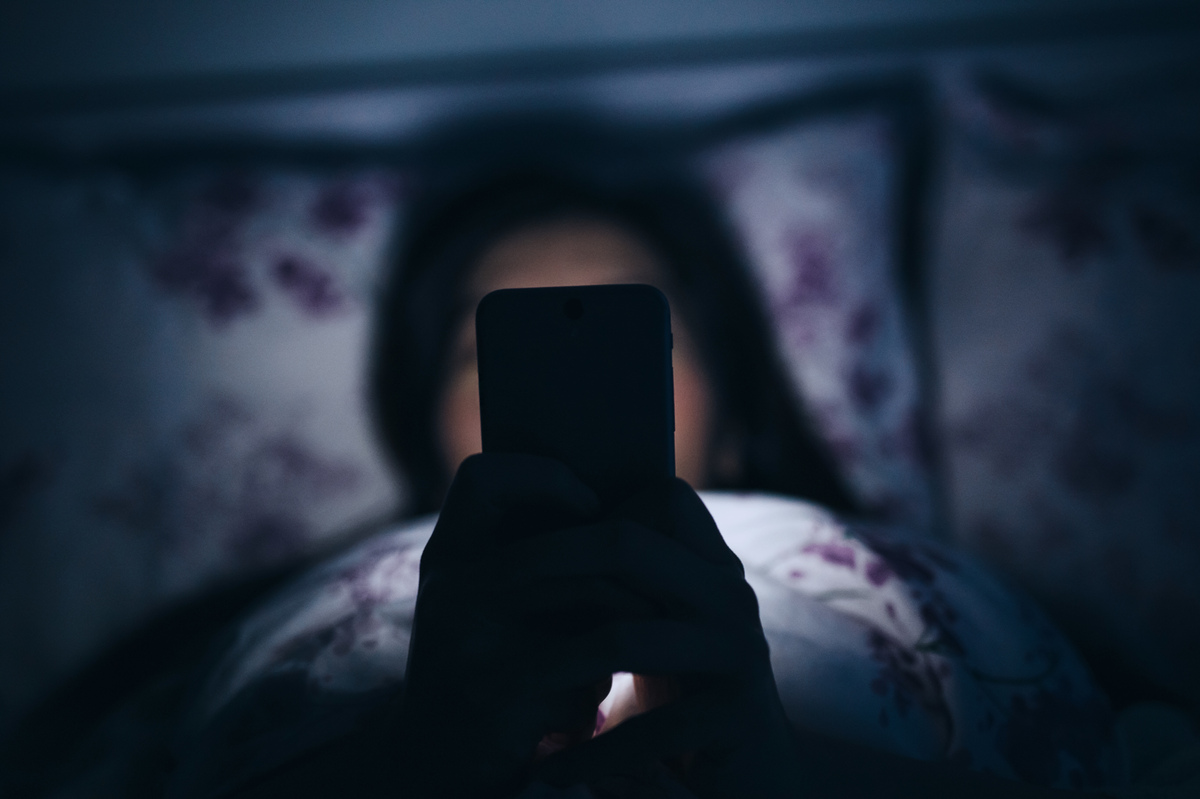 "Your brain doesn't distinguish between the work that you do at your job and paging through Facebook while you're in bed," says author Celeste Headlee. "To your brain, you're still working."

When you collapse on the couch after a long workday and start scrolling through social media, you're not doing your tired brain any favors, says author Celeste Headlee.

"Your brain sees your phone as work," she explains. "To your brain, any time that phone is visible, part of your brain is expending part of its energy on preparing for a notification to come in. It's like a runner at the starting gate."

Researchers have found that simply having your phone nearby can tax cognition. "You're carrying your work literally everywhere," Headlee says. "As far as your brain and body are concerned, you're never taking time off."

In her new book, Do Nothing, Headlee, a longtime journalist and public radio host, encourages readers to be intentional about protecting their downtime. She came to that realization after she found herself sick in bed for the second time in just a couple of months.

"I was more successful than ever," she recalls. "Things were going really well for me. So why was I not just sick, but miserable?"

Headlee started digging into the research and found evidence that the brain works best when it can alternate between focused labor (not multitasking!) and rest. Because even when it's "resting," your brain is busy doing critical tasks. In fact, the brain is nearly as active during periods of rest as it is during periods of focus, Headlee says. 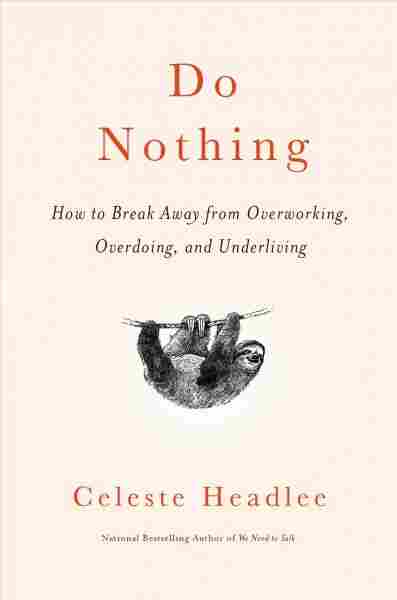 How to Break Away from Overworking, Overdoing, and Underliving

Title
Do Nothing
Subtitle
How to Break Away from Overworking, Overdoing, and Underliving
Author
Celeste Headlee

"It's sifting through memories," she explains. "It's making new connections. It's doing surprising things because it's not focused on a task. So that's where a lot of creativity comes from and innovation ... making unexpected connections."

But current American culture isn't terribly supportive of that kind of unstructured mental leisure. Headlee often asks people whether they can simply sit down and watch a movie on Netflix — just watch a movie. "I often get the response of, 'No, if I'm just sitting there, I feel guilty,' " Headlee says.

Headlee wants to help readers reclaim their relationship with nothing. The cover of her book features a picture of a sloth, an animal that (speaking of baked-in prejudices about work and leisure) shares its name with one of the seven deadly sins.

"Is a sloth really lazy, or do they just move more slowly and deliberately?" Headlee asks. "Some things have to go fast, but not everything does."

Where did our work culture come from?

Headlee believes some of America's obsession with work can be traced back to Martin Luther and the Protestant Reformation in 16th-century Europe. Ideas about working your way to heaven, Headlee explains, "meant that every idle hour was one in which you were not earning your spot with the divine. ... It was your work that made you a good person. And therefore, obviously, if you're not working all the time, you should feel guilty."

She also points to the Industrial Revolution as a "mile marker" in forming America's work culture.

"When we're learning about the Industrial Revolution in high school, I don't think they really give us an idea of how much changed when that steam engine went online," she says. "I mean, it literally changed the way our species lived and worked — almost every aspect of it."

Headlee says it's time for a reexamination of America's obsession with efficiency and speed. She believes that humans are pushing our brains and bodies in ways that are not adaptive and that this is playing a role in the nation's fatigue.

Researchers, she says, have kept good time records for decades and haven't found that Americans are necessarily working more hours. And yet, we report feeling overwhelmingly busy.

"I don't question anybody's claim that they're exhausted," Headlee says. "I know they are — I was. So you have to ask yourself: Why?"

Headlee also observes that in an age of social media, Americans are comparing themselves with celebrities — to people far outside their social circles.

Decades ago, most Americans were spending time with their neighbors, but that's less true today. "A huge number of Americans have never met their neighbors," Headlee says. "The people they know the most about are the influencers on Instagram or the people on reality TV. ... People are running, and running, and running to keep up with people whose lifestyles are completely out of their reach."

It's no wonder Americans feel the need to work harder, put in longer hours, to forever self-improve.

"You're constantly reaching for a bar that you will never put your hands on," Headlee says.

So, where do we go from here?

Headlee found that simply tracking her time helped make her more mindful of the way she was spending it. When she started keeping a diary of her days, she admits, she was surprised to see how much online shopping she was doing.

"Once you subtract sleep, and work, and eating, and commuting, and all those other things, you have probably somewhere between five or six hours a day at your disposal to do with as you please," Headlee says. "If you're using up half of that idly paging through Facebook and 'liking' things, it might come as a surprise to you that you have more time than you think."

To try to reclaim that time, Headlee has tried to limit the hours she spends engaging with email and social media.

"I took almost every app off my phone," she says, and she only checks email once per hour.

'Digital Minimalism': How To Hang Up On Your Phone Addiction

She also does an "untouchable day" each week — a day she spends entirely off social media and email.

"It was really scary at first, and I really struggled to keep it up," she admits.

She set up an email auto-reply that essentially says: "If it's really important, just call."

"It's been two years. ... No one has called," she says. "Nobody. It's never been so urgent that people picked up the phone. That really is telling to me, that most of our emails are not urgent."

Of course, not everyone has the luxury of being able to disconnect that way. Headlee understands that for many workers, their "schedules are simply not their own."

But here's her advice: "When you come home, finally, at the end of your day and you're exhausted — it's very tempting to say, 'I can't do anything else.' ... [But] even making that tiny little change of, instead of looking through Instagram, walk around your block — take that time, because your brain and your body will thank you."

The good news, Headlee says, is that her solutions are simple and free.

"These changes are ingrained, but they're also recent," she says. "And what can be done can also be undone."

Jeevika Verma and Krista Kapralos produced and edited this interview for broadcast. Beth Novey adapted it for the Web.

Read an excerpt of Do Nothing