Accessibility links
CDC Asks Hospitals To Share Data About Supplies Of Coronavirus Gear : Shots - Health News There is currently no central coordination of the supply of protective garb and masks in U.S. hospital inventories. A CDC project wants hospitals to share that information for the good of all. 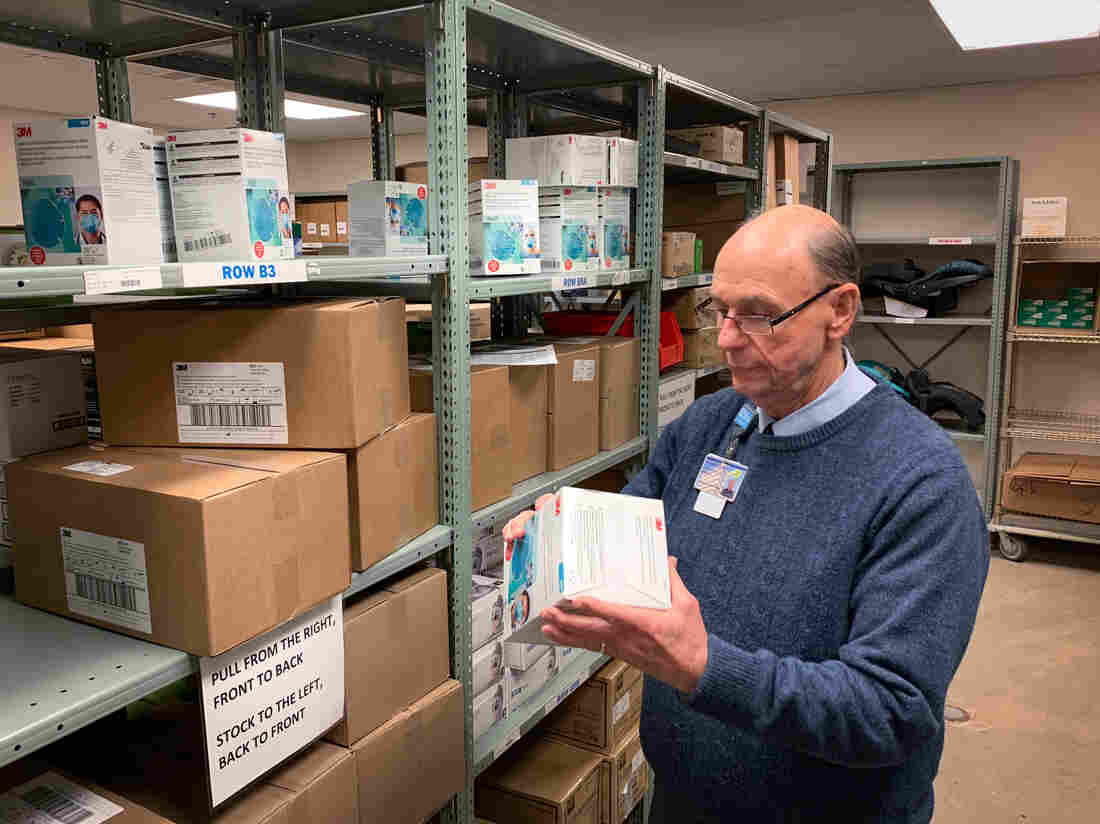 Tom Cooper, Nashville General Hospital's supply chain director, inspects a box of N95 respirators. The hospital is among a small group of pilot sites now sharing data about the inventory of its protective equipment with the Centers for Disease Control and Prevention. Blake Farmer/ WPLN hide caption 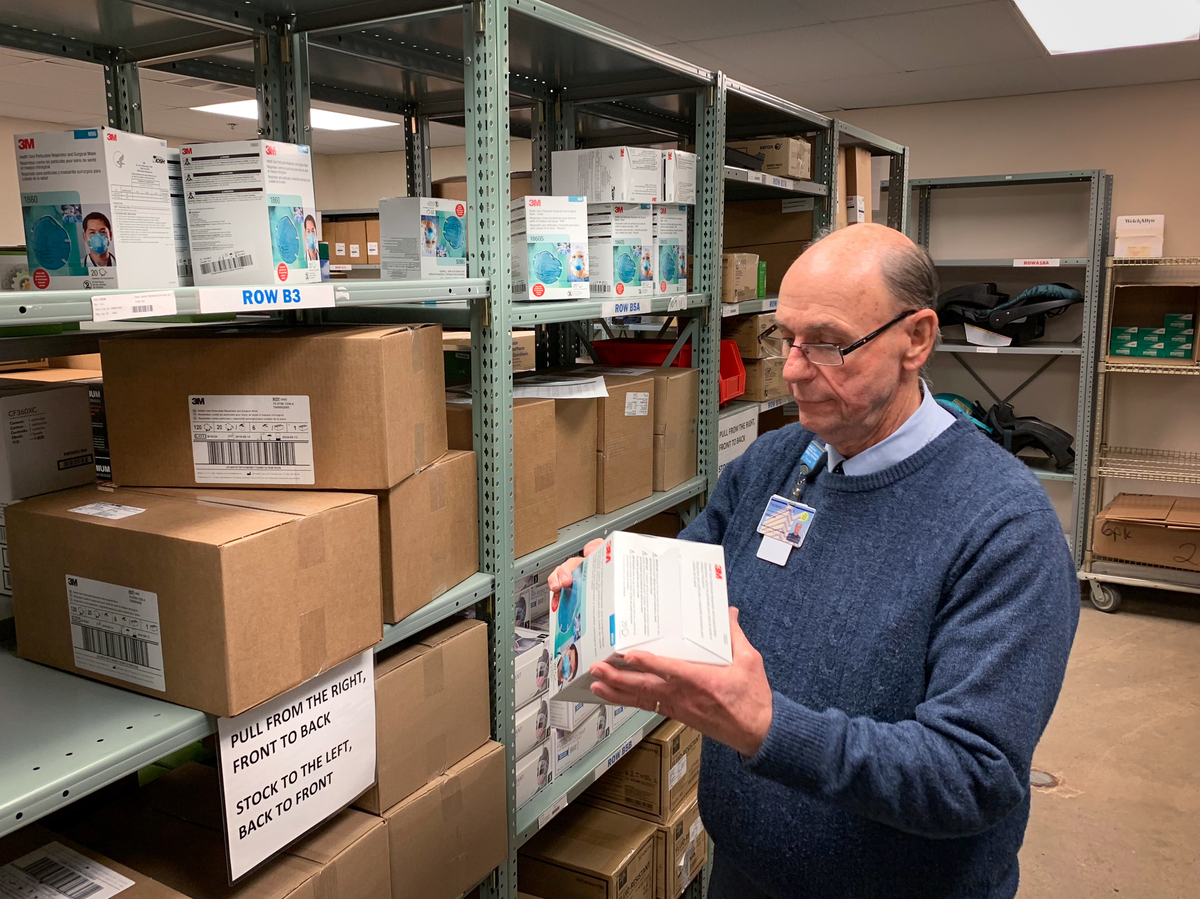 Tom Cooper, Nashville General Hospital's supply chain director, inspects a box of N95 respirators. The hospital is among a small group of pilot sites now sharing data about the inventory of its protective equipment with the Centers for Disease Control and Prevention.

Masks, gloves and other equipment are crucial as health care workers face the COVID-19 outbreak. There is a strategic national stockpile that the U.S. government controls — but no one actually knows, beyond that stockpile, what's already out there in the private sector.

Some hospitals have extras, and some not enough. The Centers for Disease Control and Prevention is working on a system that would track the inventory across the U.S.

The big hurdle isn't the technology. The issue is getting hospitals comfortable sharing information about their preparedness — information that, until now, they have considered confidential.

Protective masks have become a hot commodity, even within hospitals. At Nashville General Hospital, for example, employees are casually approaching supply chain management director Tom Cooper and asking if they can have a box for personal use.

Cooper tells them those are only available for "clinicians as needed, for their job duties."

And Cooper is feeling more protective of the supply his hospital has on hand — especially N95 respirators. General Hospital's distributor, Medline, has already restricted orders of the respirators. Cooper says he can't get any more than his usual monthly allotment, even if he could afford it. 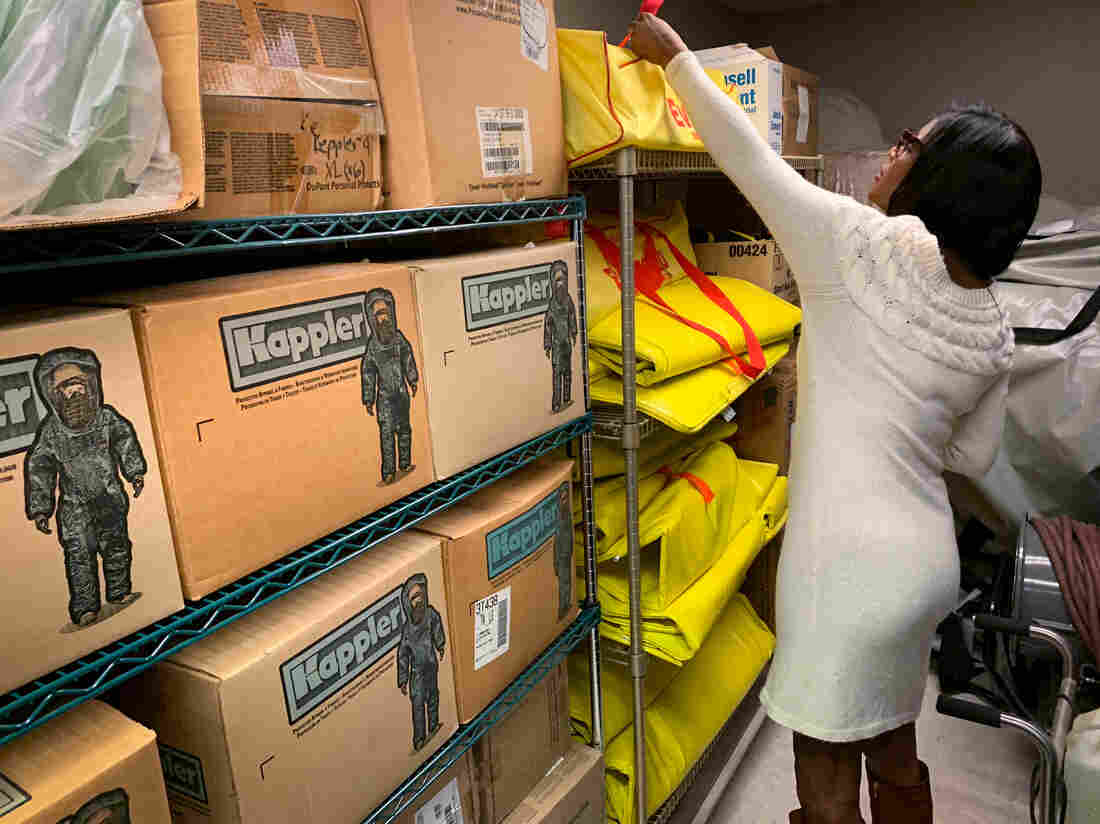 A storage closet in the basement of Nashville General Hospital holds rarely used protective suits. Melanie Thomas, chief information officer at the hospital is now sharing information with the CDC about its inventory of this sort of equipment, too, as part of the federally sponsored pilot project. Blake Farmer/ WPLN hide caption 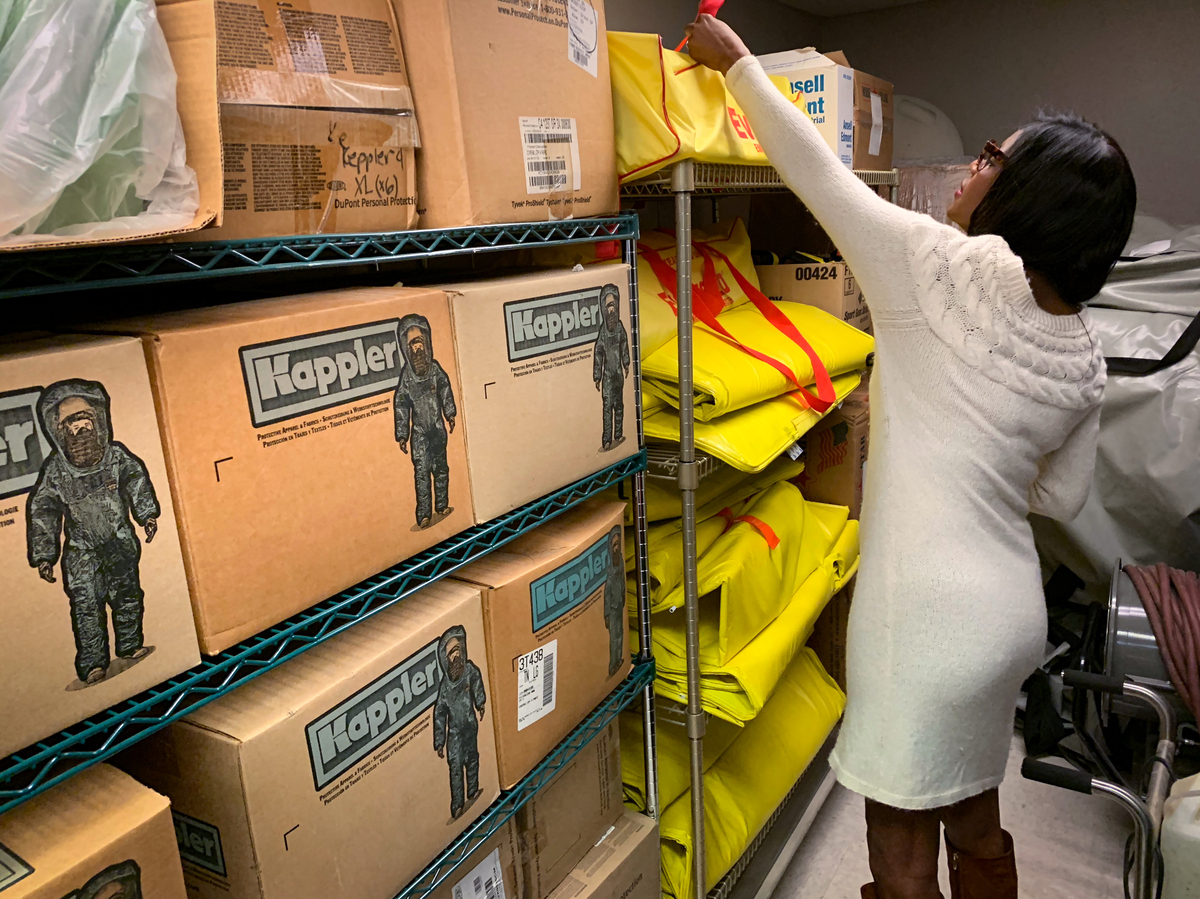 A storage closet in the basement of Nashville General Hospital holds rarely used protective suits. Melanie Thomas, chief information officer at the hospital is now sharing information with the CDC about its inventory of this sort of equipment, too, as part of the federally sponsored pilot project.

The CDC has been trying to avoid such scarcity and the costs associated with shortages. Often, there's plenty of disposable protective gear to go around, but it's not always in the right places ahead of pandemics.

"It can result in 'panic purchasing,' " says Megan Casey, a nurse epidemiologist with the CDC. "This is where facilities buy as much as possible, just to be on the safe side."

Right now, public health agencies only know what's in government stockpiles of protective gear. The U.S. Health and Human Services Secretary told Congress in recent weeks that the government has 30 million masks, even though 300 million may be needed. (The few U.S. companies manufacturing masks say demand in recent weeks has far outstripped their production capability, though they are ramping up.)

The nation's 6,000 hospitals have been more of a black box — now and in earlier epidemics. In past outbreaks of H1N1 influenza, for example, some hospitals resorted to informal supply swaps on a street corner, according to project managers with the Center for Medical Interoperability.

Last year, before COVID-19 emerged, the Nashville-based nonprofit was awarded a $3 million contract with the CDC to build a system that calls for hospitals to submit information about their real-time inventory. The information typically can be pulled directly from an institution's electronic medical record system. Using that accumulated data, the CDC should be able to easily use a digital dashboard to identify facilities that have the greatest need.

"It could also, potentially, provide a tool for hospitals to request personal protective equipment from state or local health departments, stockpiles or even other hospitals that might have excess," Casey says. "We do see this as a potential opportunity for resource sharing and having those kinds of discussions."

But the prospect of sharing supplies is where the business of health care makes cooperation hard even in a crisis, says Melanie Thomas. She's the chief information officer at Nashville General, which is one of the pilot sites for the CDC-sponsored project.

"It's difficult and scary sometimes to share data and equipment, especially with your competitors," Thomas says, "because you want to have the advantage."

Nashville General is the smallest of the pilot sites, which also include Northwestern Memorial in Chicago and Nashville-based Community Health Systems, a for-profit chain of nearly 100 hospitals around the U.S.

Thomas acknowledges that it's easier for her taxpayer-funded hospital to grant access to its inventory system because it doesn't have the buying power to stockpile equipment.

"That's never going to be our problem," she says. "We want the shared information because we're going to have just enough."

And when they run out, she'd like to know where to turn to get more.

The Center for Medical Interoperability started its work quietly, a few months before COVID-19 emerged. But the project managers have noticed a greater willingness to participate among major health systems now that a theoretical threat has become very real.

"We know ... that their supply chains are under strain right now because these products, they come out of China," says Tommy Ragsdale, the center's director of strategy.

China needs the disposable equipment that is manufactured there for its own use. And only a handful of companies in the U.S. still make the protective gear domestically. One has orders for more than a billion masks.

"It has definitely created different discussions at the hospital and health system level than we were having in October or November," Ragsdale says.

The CDC has pumped an additional $600,000 into the data sharing project, with an accelerated go-live date in May, Ragsdale says. The center plans to hold a webinar April 1 for additional hospitals interested in participating in later phases.

At this point, the CDC says there's no mandate for hospitals to participate. But Ragsdale says he hopes they will see the benefit. "This is clearly for the greater good," he says.