Accessibility links
U.S. Adds U.K. And Ireland To Travel Ban; New Restrictions In Multiple Countries : Shots - Health News Trump administration officials announced an expansion of a European travel ban to include the U.K. and Ireland. It came as governments around the world instituted new measures to halt the disease. 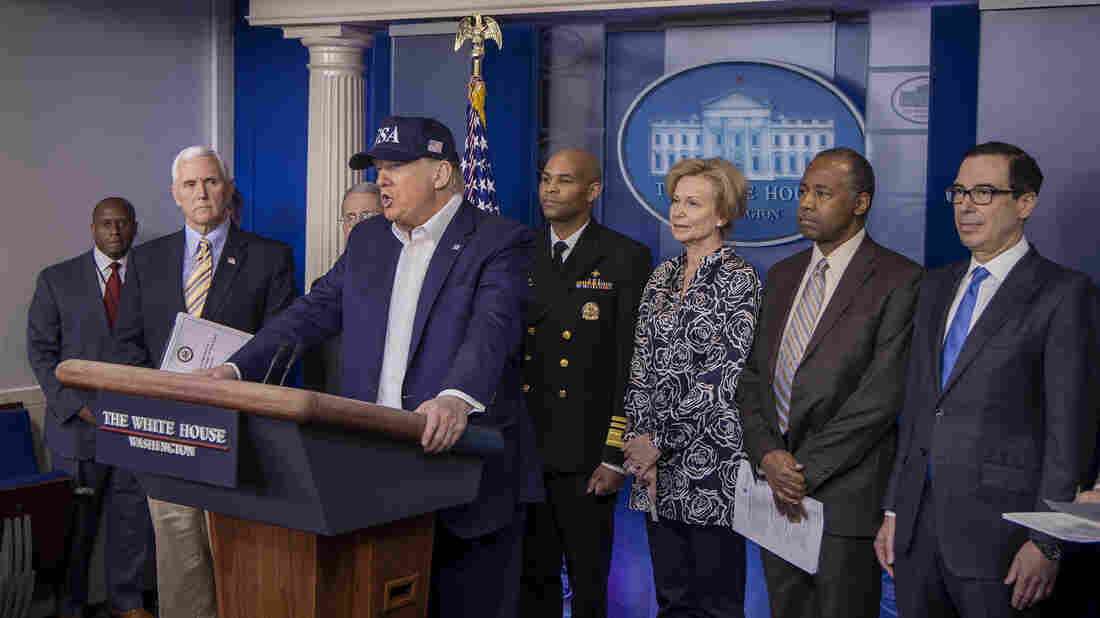 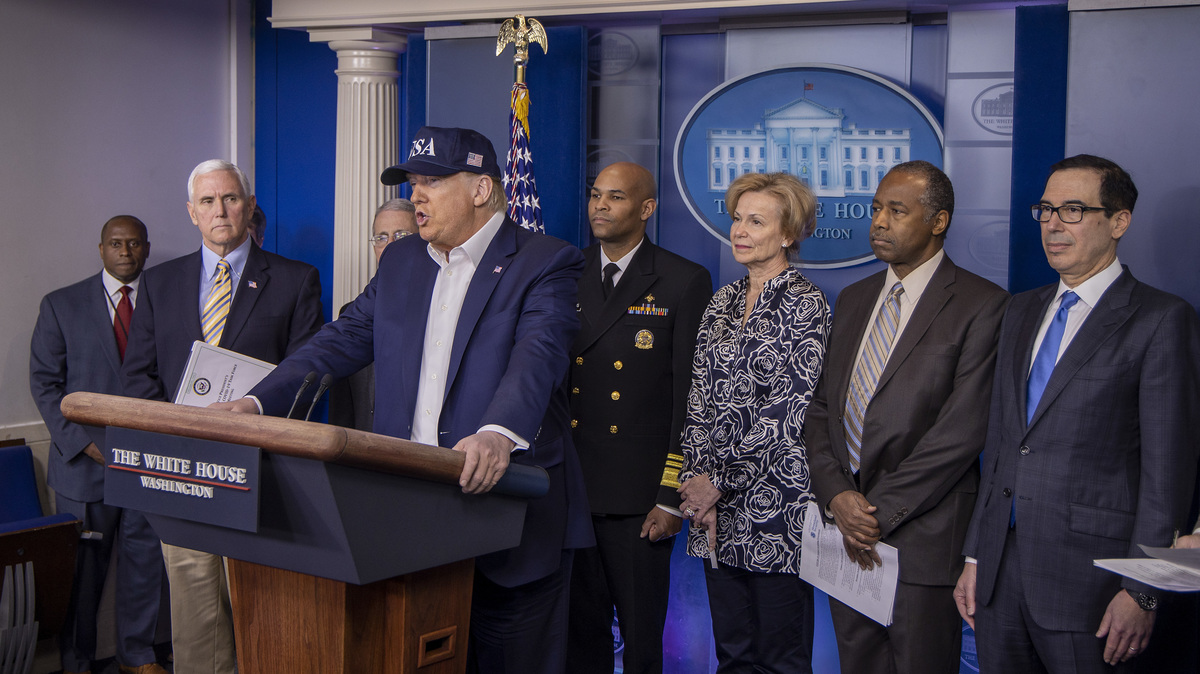 President Trump speaks Saturday at the White House. Officials said a travel restriction would expand to the U.K. and Ireland beginning midnight Monday.

The U.S. and countries around the world continued to adapt to the spreading coronavirus pandemic by imposing new restrictions Saturday, as the virus upended travel plans, pushed back elections and forced major companies to adapt.

In Washington, the Trump administration said Saturday that the U.S. would extend the current ban on travel from Europe to include the U.K. and Ireland, effective midnight Monday.

The U.S. travel ban does not apply to American citizens, legal permanent residents, their immediate families, and certain others. These people will be channeled through one of 13 airports equipped to do special screening.

"If you don't have to travel, I wouldn't do it," Trump said. "We want this thing to end. We don't want a lot of people getting infected."

The Trump administration said the number of Americans who have died of the coronavirus now stands at 50, with more than 2,200 cases in the country. It is in nearly every state, plus Puerto Rico and the District of Columbia.

The White House travel restrictions announced Saturday follow the Department of Defense's decision a day earlier to halt domestic travel for all service members. In a memorandum released Friday night, the Pentagon explained that — with few exceptions — the ban applies to all personnel assigned to its facilities in states and territories throughout the U.S., beginning Monday.

The Pentagon added that its civilian employees and family members, "whose transportation is government-funded, will also stop movement."

"These restrictions are necessary to preserve force readiness, limit the continuing spread of the virus, and preserve the health and welfare of Service members, DoD civilian employees, their families, and the local communities in which we live," Deputy Secretary of Defense David Norquist said in the memo.

The order, which adds to the Pentagon's foreign travel restrictions announced earlier this month, carves out exceptions for just a handful of "compelling cases" — including travel that's deemed necessary for medical treatment, a particular mission or humanitarian reasons. Aside from these cases, Defense Department personnel have been told to stay put until at least May 11.

The order comes amid a flurry of actions at the federal level to mitigate the spread of the novel coronavirus, which the World Health Organization officially classified as a global pandemic earlier this week. Trump declared the virus a national emergency Friday, freeing up tens of billions in federal funds just hours before the House of Representatives overwhelmingly passed a sweeping relief package of its own, which Trump says he supports.

The bill is expected to head to the Senate, where its fate remains unclear.

The coronavirus is also shaking up an election year. On Saturday, Georgia became the second state, after Louisiana, to postpone its presidential primary vote in response to the outbreak.

In another step that sticks to public health guidance against large gatherings, Democratic candidates Bernie Sanders and Joe Biden will take the primary debate stage on Sunday night without a live audience. The debate was already moved from Arizona to Washington, D.C., over coronavirus concerns.

As of Saturday, there were more than 156,000 confirmed cases of coronavirus globally, according to a count by Johns Hopkins University, prompting new action by governments around the world.

In France, where more than 4,400 cases have been confirmed, the government on Saturday ordered the closing of all nonessential businesses, including restaurants, bars and theaters. Grocery stores, drugstores, banks and gas stations will be allowed to stay open.

In Israel, where 193 cases have been confirmed, Prime Minister Benjamin Netanyahu ordered the closing of all schools, restaurants, cafes, malls, hotels, event halls, gyms and movie theaters beginning Sunday. Gatherings of more than 10 people will be prohibited, and the government will seek to use surveillance technology "used in the war against terror" to track the movements of coronavirus carriers, Netanyahu said.

Some of the world's biggest companies have also announced new protective measures. In a statement issued Friday, the technology giant Apple joined the chorus of government agencies and businesses announcing sweeping changes to combat the virus's spread, saying that it plans to temporarily close all of its retail stores outside China through at least March 27. At the same time, the company guaranteed pay for its hourly workers and says it has expanded its leave policies to support employees affected by COVID-19.

"There is no mistaking the challenge of this moment," CEO Tim Cook said in the announcement. "And yet," he added, "I have been inspired by the humanity and determination I have seen from all corners of our global community."

Evidence of this solidarity was to be found in Italy — the hardest-hit country outside of mainland China, where the virus traces its epicenter. More than 1,400 people have died of COVID-19 in Italy, where hospitals have been overwhelmed by the number of cases and leaders have imposed travel restrictions on the entire country.

Still, the pandemic has not prevented Italians from singing — even if, for the sake of tamping down on the virus's spread, they have to maintain their physical distance while doing so. Social media on Friday was awash with videos of people who stepped out onto their balconies, looked around at their neighbors and joined one another in song.

Since the 1.5 years I’ve been living in this neighbourhood, this is the most vibrant I have seen this street! #Covid19italia #coronavirusitalia #litaliachiamo #flashmob pic.twitter.com/bdKgV68Chu