Accessibility links
Community Hospitals Get Set For Strain Of Coronavirus : Shots - Health News Here's what it will take for medical facilities across the nation to handle the coming surge of COVID-19 patients. 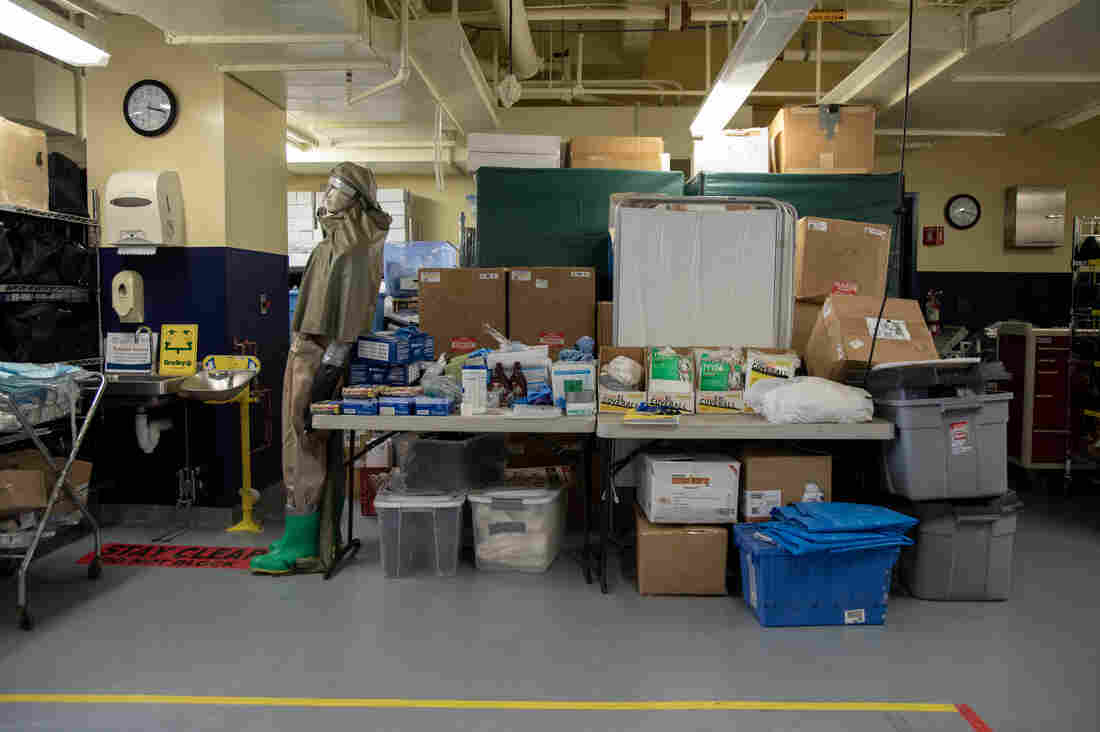 MedStar Washington Hospital Center's "ready room" in Washington, D.C., has mostly been used to house emergency supplies — but some storage carts have been moved out to make way for patient assessment stations. Ryan Kellman/NPR hide caption

On a recent visit the staff had already marked out the parking lot — painting green rectangles to mark the places where tents are starting to be set up to screen arriving patients for COVID-19.

In a medical building on the hospital grounds, the director for emergency management, Craig DeAtley, opens the door to a room crammed with supplies. It's called the "ready room" he explains. It's where they keep equipment to handle all kinds of crises — from Ebola to a HAZMAT incident to a mass casualty situation.

Right now, the crisis is coronavirus, and so some storage carts have been moved out, to create one more location where arriving patients can be assessed.

"Instead of everybody going into the emergency department, we would try and siphon off some of those patients," DeAtley says.

Washington Hospital center's efforts highlight the question medical facilities across the U.S. now confront: Are they ready for what's coming?

The stakes could not be higher — when a hospital is flooded with more critically ill patients than it can handle, more patients die. 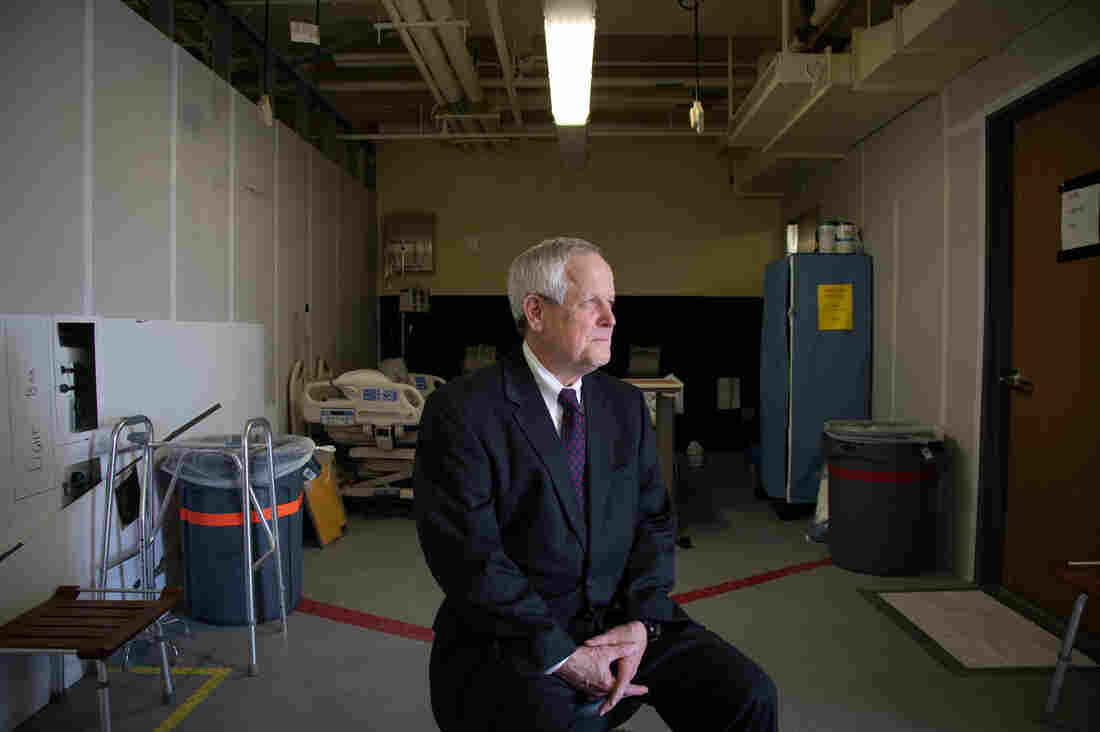 Craig DeAtley directs Emergency Management at MedStar. One goal in creating more room to handle an expected surge of COVID-19 patients, he says, is to move the assessment of some walk-in ER patients to stations in this room — as well as to stations in large tents being set up in parking lot. Ryan Kellman/NPR hide caption

Other places in the world — where the coronavirus spread seems to be just ahead of the U.S. — like Italy — have seen their hospitals overwhelmed.

And even in the U.S., some hospitals and and other health facilities already are facing short supplies. On Sunday, Washington state's Congressional delegation sent a letter to Health and Human Services Secretary Alex Azar about that hard-hit state's need for more personal protective equipment from the strategic national stockpile. "Many health centers, nursing facilities, fire departments, and other sectors through the state have either depleted their supply of [personal protective equipment] or will run out in a matter of days," lawmakers wrote.

Meanwhile, spots that haven't faced many — or even any — cases yet are trying to prepare. One rural hospital, Syringa Hospital in Grangeville, Idaho, is planning to ask patients who show symptoms of COVID-19 to stay in their cars outside the ER, where they can be evaluated and get masks.

And in D.C., Washington Hospital Center is rushing to get testing up and running at its in-house laboratory. It's also coming up with ways to quickly remodel rooms to better serve critically ill COVID-19 patients.

"We are working on ways to increase the negative pressure room capability within our ICU," DeAtley says, which would prevent coronavirus from spreading from room to room.

ICU capacity could be the real chokepoint for many hospitals in America, says Eric Toner, of Johns Hopkins Center for Health Security.

"For the average American city we would probably need twice the normal intensive care capacity than we normally have," says Toner.

A recent paper posted online by Toner and collaborators at Harvard University and Nanjing Medical University in China looked at what happened to intensive care units in Wuhan, China — the first place this outbreak hit. ICUs in the city saw tens of thousands of patients.

Toner estimates that if the U.S. sees the same rate of spread, every hospital in the nation would have to take drastic steps to meet the need.

"No hospital will be able to function as normal," says Toner. "It's a question of whether they can adequately adjust the way they do things in order to handle the tsunami of patients that are coming their way."

There are many potential strategies for increasing ICU capacity, Toner says. For instance, "normally, we would put a pneumonia patient in a medical ICU," he explains, but hospitals might have to commandeer any free beds in the ICUs of all sorts of specialized departments — such as neurology or pediatrics. Hospitals that don't have a lot of free space are looking to create ICUs in larger spaces like auditoriums.

American hospitals have a finite number of respiratory ventilators and other supplies needed by health workers, as well as patients. "Our health care workers are the most precious resource in this response," says a medical director at a Boston hospital. Ryan Kellman/NPR hide caption

But that last measure brings an additional challenge says Toner. "You could have more beds — that's easy. But people in an ICU need all sorts of specialized equipment. They need IV pumps, they need monitors of various kinds, and — most importantly for COVID-19 — most of them need mechanical ventilation."

There are a finite number of ventilators across the U.S., including in a strategic national stockpile that is thought to have several thousand ventilators available to hospitals if needed.

"We also have to increase staffing," Toner warns. "We have to have reasonably trained people to operate the kind of equipment and care that these people need."

'The most precious resource'

Keeping health care workers safe amid the whirlwind of this pandemic is top of mind for Nahid Bhadelia, medical director of Boston University School of Medicine's special pathogens unit.

"Our health care workers are the most precious resource in this response," she says. If health workers can't protect themselves, more and more of them will start to fall sick. "So you're going through your cadres of health care workers until you get to the point where you cannot provide the kind of care you want to to the patients."

To avoid that situation it will be crucial to provide health workers with personal protective equipment such as masks, goggles and gowns.

At present, Bhadelia thinks her hospital has enough protective gear. But she says, "if you ask me in six months I don't know what the scenario might look like. Nobody knows how many months this might go on for."

Toner at Johns Hopkins estimates that if U.S. hospitals are able to scale up their capacity using all the creative measures he and others advocate, they will just about meet the various needs required to care for all COVID-19 patients. 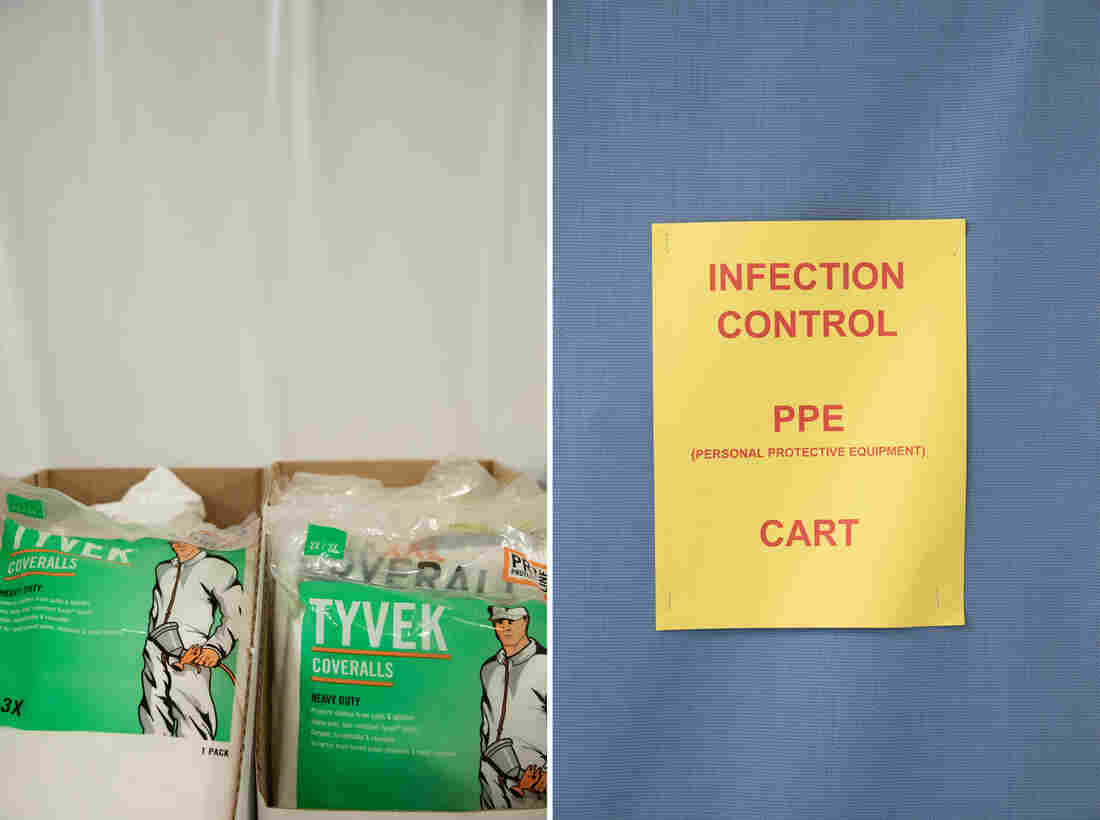 Having a good supply of personal protective equipment — masks, gloves, gowns and other gear — for hospital workers is key to the well being of both patients and staff. Ryan Kellman/NPR hide caption

Even at a big, sophisticated, well-resourced place like Medstar Washington Hospital Center in D.C., those in charge feel they must prepare for the worst.

DeAtley — the emergency preparedness director — says his hospital has an ethics plan for how to ration care, and the heart-wrenching decisions that would entail: "Who gets a ventilator, versus who gets a bag valve mask, versus who doesn't get either one of the two."

Doctors are already making those choices in Italy, based on factors such as each patient's age and likelihood of survival.

"Clearly, we all hope that we don't see that extreme here in this country," says DeAtley. "But we have a plan if it came to that. Other hospitals I know have a plan as well."

As grim as that sounds, Toner says there's also some reason to be hopeful.

He and his collaborators didn't just analyze what happened in Wuhan. They also looked at the experience of hospitals in the Chinese city of Guangzhou — where authorities were much quicker to impose social distancing. They put many of the measures in place just a week after the virus started circulating. The result was that hospitals had to deal with far fewer patients. 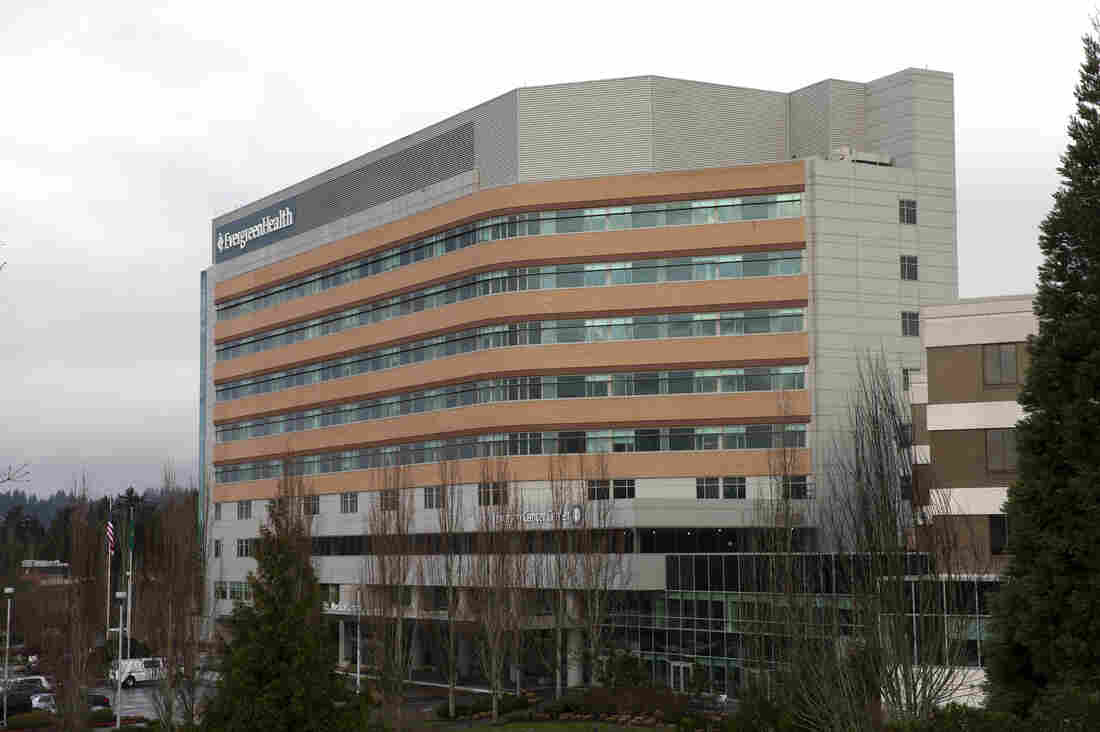 The EvergreenHealth Medical Center, in Kirkland, Wash., identified the first fatal case of COVID-19 in the U.S., and has already had to care for a surge of serious cases. Karen Ducey/Getty Images hide caption 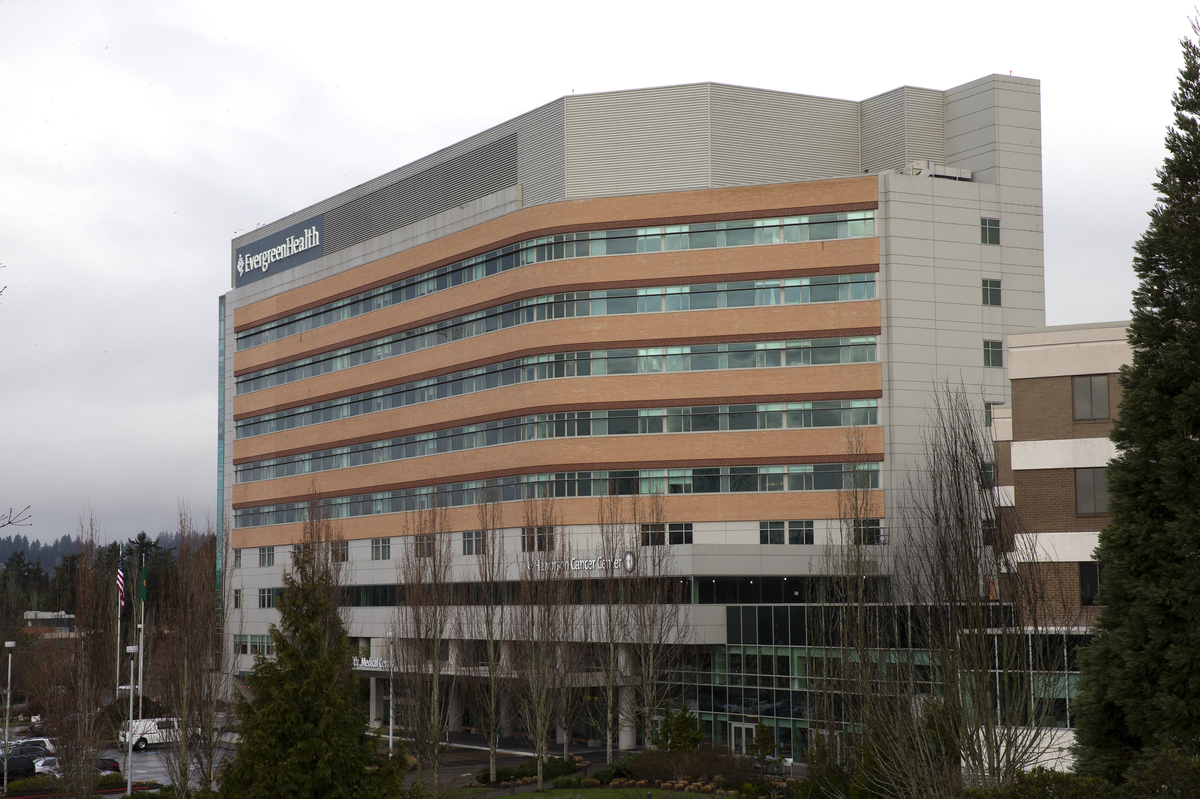 The EvergreenHealth Medical Center, in Kirkland, Wash., identified the first fatal case of COVID-19 in the U.S., and has already had to care for a surge of serious cases.

To the extent that the U.S. follows Guangzhou's pattern of spread, "I mean it won't be a walk in the park for hospitals," says Toner. "But I think it would be manageable."

In other words, what people out in the community — all of us — do in the coming days and weeks to slow down the virus could yet change the picture for hospitals.

All the social distancing Americans are trying to do now — shutting down bars and restaurants, hunkering down at home — might seem like an overreaction at a time when the number of confirmed cases is still low. But those measures could be what makes it possible for hospitals to see us through this crisis and save many more lives.