Accessibility links
Coronavirus Testing Delays Fueled By Swab Shortage : Shots - Health News The specialized swabs required for coronavirus tests are quite different from your standard Q-tips. And U.S. hospitals are running out of them, creating another delay in efforts to expand testing. 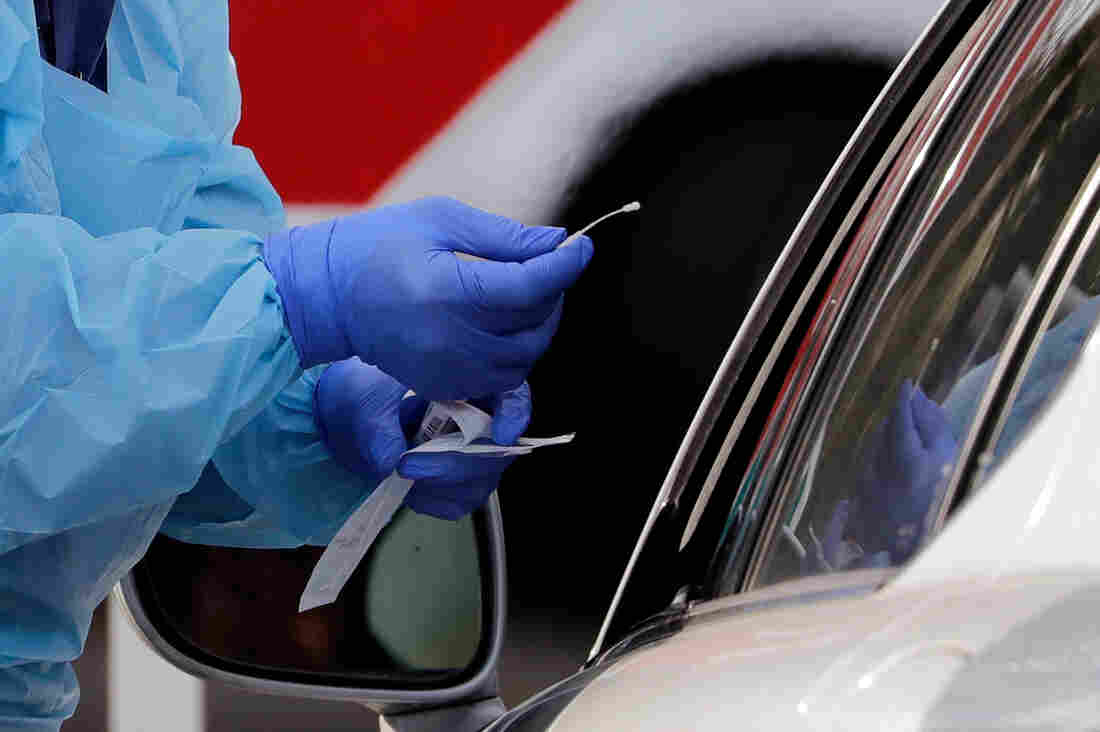 Medical personnel use specialized swabs to gather samples to test for coronavirus, such as at this drive-through COVID-19 testing station in Seattle. The supply of these swabs is getting tight. Elaine Thompson/AP hide caption 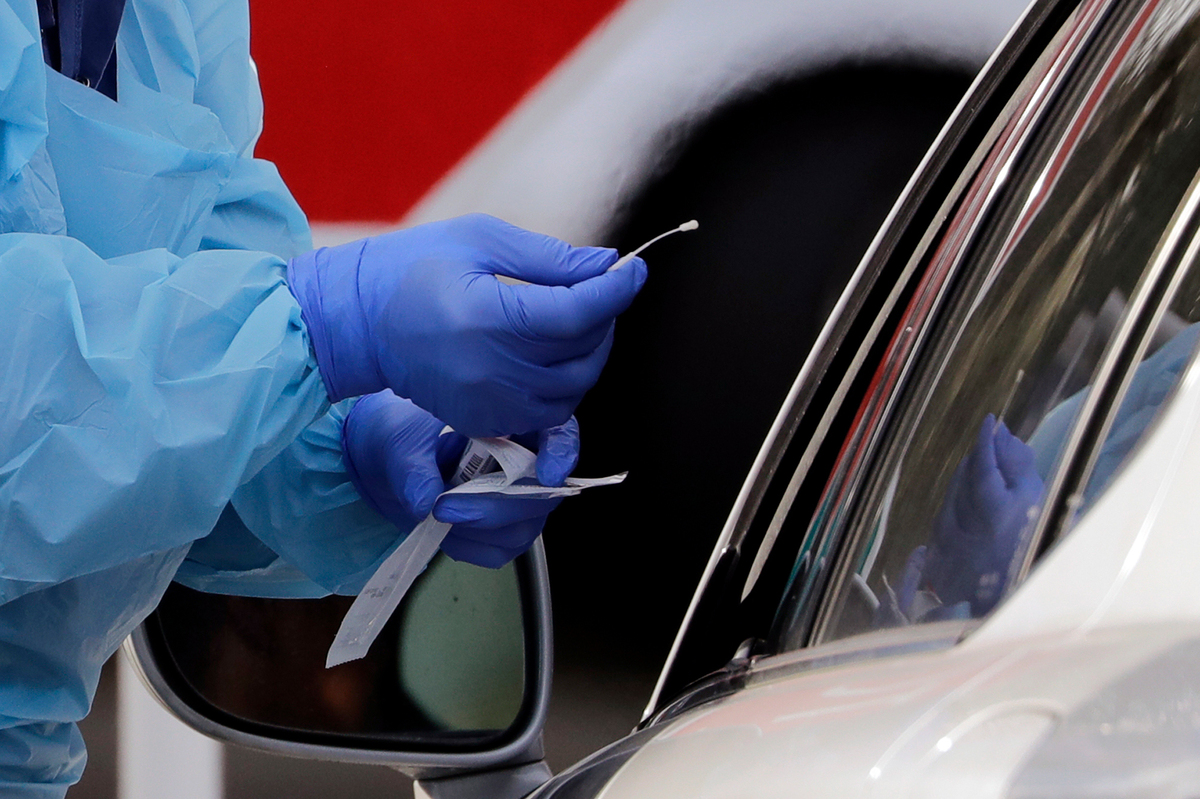 Medical personnel use specialized swabs to gather samples to test for coronavirus, such as at this drive-through COVID-19 testing station in Seattle. The supply of these swabs is getting tight.

The two top makers of the highly specialized swabs used to test patients for the novel coronavirus are straining to keep up with the demand, even as both the Italian and U.S. governments are working with them to increase production, including at a key manufacturing site in the midst of Italy's outbreak.

The nasopharyngeal swabs required for the coronavirus tests are quite different from your standard Q-tips — and the exploding need for them has created a bottleneck in the soaring demand for diagnoses.

The swabs have to be long and skinny enough to get to the nasopharynx, the upper part of the throat, behind the nose. They must be made of synthetic fiber and cannot have a wooden shaft. Nor can they contain calcium alginate, a substance typically used for swab tips in wound care, as that can kill the virus, according to the Centers for Disease Control and Prevention.

These swabs are currently singled out by CDC and Food and Drug Administration guidelines as suitable for most coronavirus testing. Once used, they're typically mailed in transportable vials full of a solution known as "viral transport media," which keeps the virus testable.

While last week's critical shortage was a reagent chemical used in the diagnostic tests, now the specialized swabs are in dire demand, according to Soumi Saha, a pharmacist who is the senior director of advocacy for Premier Inc., a group purchasing organization that procures supplies for 4,000 U.S. hospitals and health systems. As testing finally ramps up in the U.S., hospitals especially are having a hard time getting enough of these swabs, Saha says.

"We have folks that can't get a hand on any of them right now," Saha says. "Hospitals want to do their part and want to expand access to testing, but they're hamstrung by the fact that they can't access the actual swabs."

Former FDA commissioner Scott Gottlieb pointed out on Twitter on Monday that a lack of swabs could be the new bottleneck even as the number of sites with the capacity to test has increased, showcasing that the weakest link in the supply chain becomes the limiting factor.

Missouri has been among the places seeing a shortage of swabs, state Department of Health and Senior Services spokesperson Lisa Cox confirmed over the weekend. Ontario, Canada, plus counties in Washington and Michigan have announced that limitations on swabs were creating a logjam in their testing capabilities, according to news reports. Axios first reported on the national swab shortages last week.

Part of the problem lies in the nature of current test procedures for COVID-19. Typically, one needs to use two swabs per person: one swab for a flu test to potentially rule out the need for a coronavirus test, then another for the coronavirus if the flu test is negative.

Since the swabs are a product that is regulated, patented and specialized, they're hard to make on the fly, Saha says. That puts additional pressure on the two largest manufacturers.

One of them, Puritan Medical Products, based in Guilford, Maine, has been working to keep up with demand even as its workforce, like many in America, has been affected by the spread of the virus, spokesperson Timothy Templet says.

The U.S. Department of Health and Human Services, along with working groups from the White House and other federal agencies, has been in discussion with the company over the past week to redirect some of their manufacturing capabilities away from other clients to COVID-19 specialty swab production, Templet says.

Currently, Templet estimated, Puritan is producing between 800,000 and a million swabs a week that could go to COVID-19 efforts. If the government decides to redirect its manufacturing efforts, cutting off the supply of its other medical products for items like flu kits, it could make millions more.

Still, Templet said that ramping up production so drastically would take a few weeks to get fully off the ground, considering manufacturing capabilities and protocols.

Templet says HHS plans to open 37 testing sites across the country in the coming days to account for increased testing needs — which will require even more specialty swabs. He also says the government is considering expanding its recommended testing material options to allow for more general nasal swabs to keep up with the increased testing demand.

FDA spokesperson Stephanie Caccomo said in an email that the agency is aware of "supply chain pressures on obtaining certain materials for running tests" and that it is continuing to evaluate other options for specimen collection supplies, which it will list on its website.

Another specialty swab manufacturer, Copan Diagnostics Inc., which is based in the Lombardy region of northern Italy, is working 24/7 in a "tremendous effort" to produce products such as its CDC-recommended and patent-protected FLOQSwabs, all while asking customers and distributors to ration orders to maximize output, spokesperson Gabriela Franco said in an email.

While produced in a region hit hard by the novel coronavirus, where most other work has stopped, Franco said, the Italian government has allowed the business to continue production. And it is working with local and national authorities on keeping production up in case stricter health restrictions are adopted.

Copan could produce 720,000 specialized swabs in a day and as many as 100 million per year for the global market, according to records the firm filed in a 2018 patent lawsuit.

Amid the crunch, Copan CEO Stefania Triva said in an emailed statement that her company is working round-the-clock to keep up with demand.

"Without full commitment and sacrifices from all of my staff, we would not be able to meet this unexpected demand," Triva said. "COPAN's more than 660 members of staff, many of whom are women, without hesitation, once made aware of the Coronavirus emergency, have stepped up from five working days and two shifts to seven working days and night shifts also."

New Jersey-based Becton, Dickinson and Co., a leading assembler of those kits involved in ramping up coronavirus testing, has seen extremely high demand for swab products this year, company spokesperson Troy Kirkpatrick says. But now that Copan is "running operations 24/7" to increase production, Kirkpatrick says, "we will be providing hundreds of thousands of swabs to the U.S. market each week."