Accessibility links
Might The Experimental Drug Remdesivir Work Against COVID-19? : Shots - Health News It's too soon to know if the antiviral compound tested in 2014 as a potential Ebola treatment will hobble the coronavirus. Lab tests show promise, but studies in people with COVID-19 have only begun. 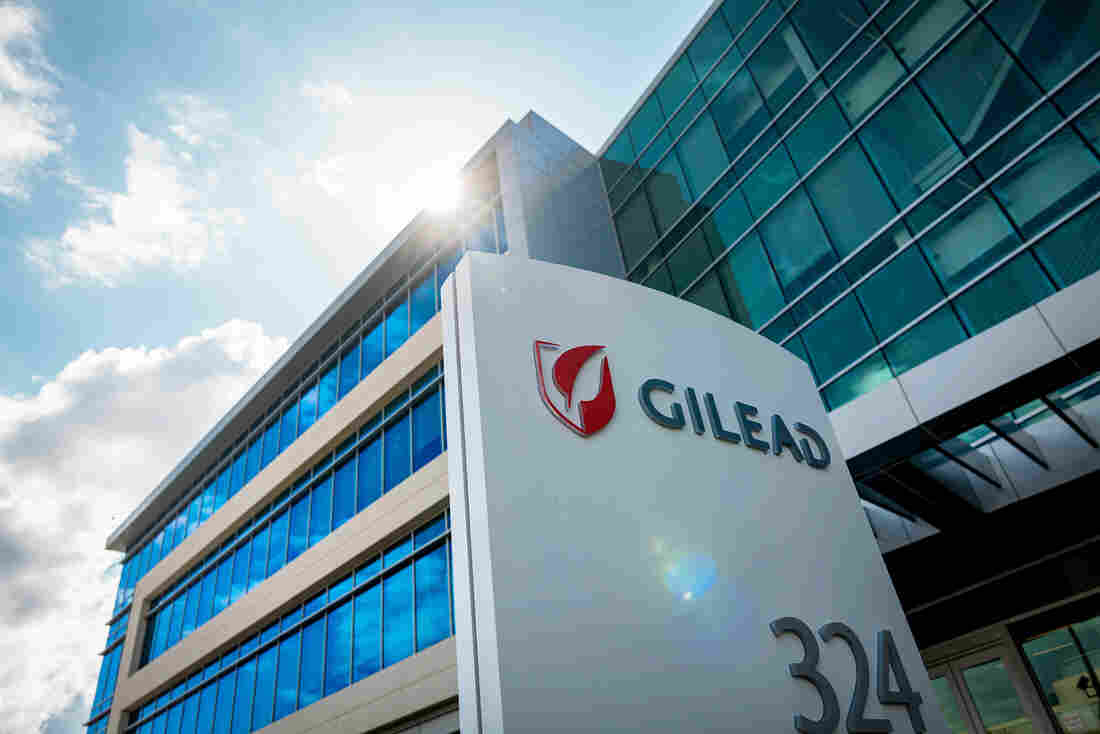 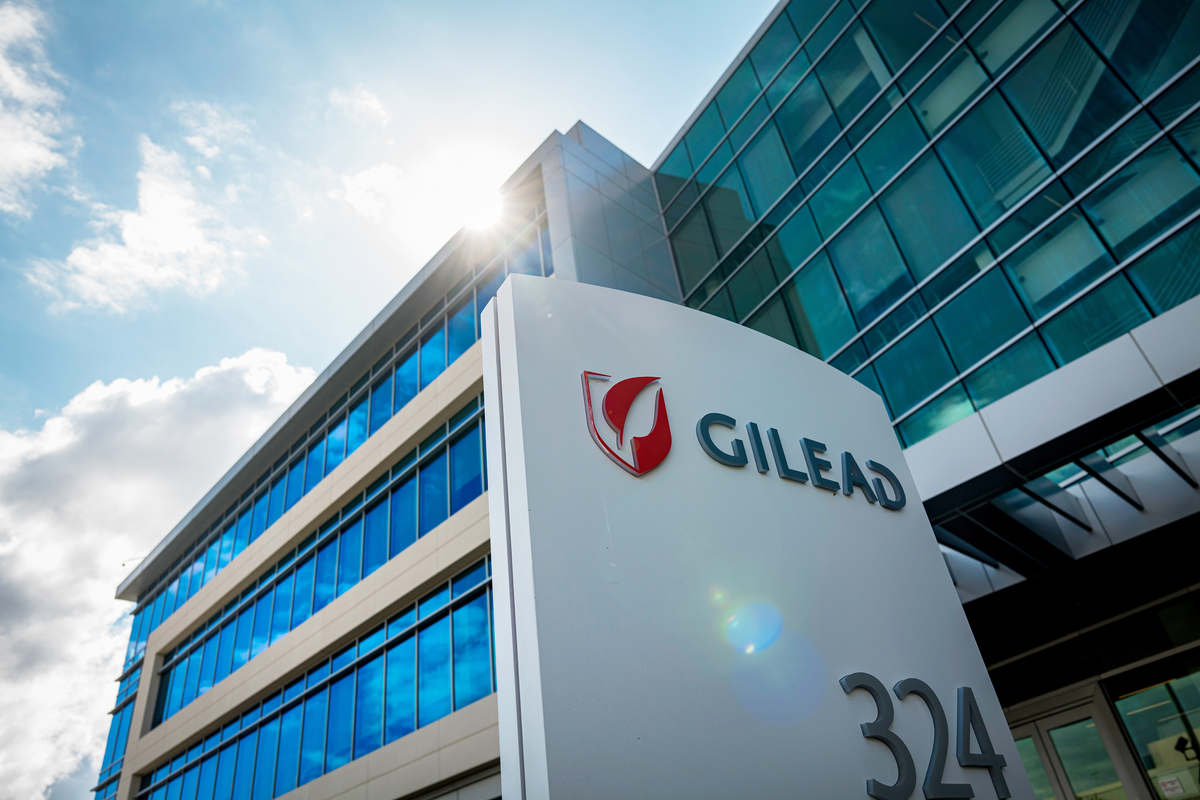 Gilead Sciences, headquartered in Foster City, Calif., makes remdesivir, one of the experimental drugs now being investigated as a possible treatment for COVID-19.

With a coronavirus vaccine at least a year away, some scientists are investigating existing medicines and compounds that might work as effective treatments. A drug called remdesivir is now in the spotlight, but health professionals, and scientists say it's too soon to know if it really works against COVID-19.

Remdesivir is an antiviral, intravenous medicine made by Gilead Sciences that's been around for years as an experimental compound, but was never approved by the Food and Drug Administration — or any other country's drug approval agency. It's now undergoing multiple clinical trials around the world to see if it's safe and effective against the coronavirus in people.

"That's typical of an epidemic or crisis like this," says Ken Kaitin, who directs the Tufts Center for the Study of Drug Development. "Before [companies] start developing brand new drugs and new molecules, they quickly go back over the shelf and test [the ones they already have] to see if any of them make sense."

Remdesivir was one of the drugs being studied in 2014 as a potential Ebola treatment, but was sidelined in favor of other treatments and vaccines.

Since then, scientists have done lab studies to see how remdesivir performed against several other viruses, including two viruses in the same coronavirus family as the one that causes COVID-19 — the viruses behind SARS and MERS. They saw positive results in lab tests and animal studies, and think the drug interferes with viruses' ability to replicate.

That's why remdesivir was taken off Gilead's shelf as a potential COVID-19 treatment that's worth further testing.

"Obviously we are waiting for data, both in vitro and then in people to ensure that the drug actually works," Gilead CEO Daniel O'Day told investors in early February. "And it's important, just for everyone to keep that in mind, that this is still investigational — we are still waiting for more data to know."

The lab tests are "a very good first step," toward identifying a promising compound, says Travis Warren, principal investigator for the Geneva Foundation, working at the U.S. Army Medical Research Institute of Infectious Diseases. Warren and his colleagues were among the first scientists to run early tests on remdesivir when it was being studied in Ebola. Still, he says, there are "many different reasons" why a drug could work well in a lab, but not in humans.

"I'm very pleased to have provided a role in allowing remdesivir to be positioned where it currently is," Warren says. "Whether or not it ends up being useful is 100% dependent on the outcome of those clinical trials."

Clinical trials for remdesivir as a COVID-19 treatment began in China in early February. Additional clinical studies weren't far behind — this time with study arms around the world, including in the United States.

In one Gilead-sponsored trial, researchers are measuring how remdesivir affects sick patients' oxygen levels. In another, they'll measure how many sick patients can leave the hospital within two weeks after starting treatment with remdesivir.

But it's too soon to see final study results. And without them, "we cannot really conclude whether it works or not," says Sheng Ding, dean of the school of pharmaceutical sciences at Tsinghua University.

"For patients or [the] general public, it is understandable that hope is important," says Ding, who also directs the Global Health Drug Discovery Institute. "But such hope or expectation needs to be managed and balanced, and should let [the] science speak for itself."

The National Institutes of Health's remdesivir clinical trial is taking place at sites around the United States. At Massachusetts General Hospital in Boston, it began this week, says epidemiologist Rajesh Gandhi, who is leading the hospital's COVID-19 treatment taskforce.

Gandhi is pleased by how quickly his hospital was able to get going on its part of the clinical trial. "We need answers sooner rather than later," he says.

"We got the drug on the weekend, and gave it to the first patient the very next day," he tells NPR.

He says human studies will not only tell us whether the drug works, but for whom it works. For example, it's possible, he says that the drug would only be beneficial for patients with mild or moderate symptoms, but be harmful to those with severe disease.

The FDA and Gilead are also granting access to the drug via "compassionate use" programs. Compassionate use is when patients are allowed to get unapproved, experimental medicine outside of clinical trials. The FDA says it has granted this sort of access to remdesivir to about 250 patients already.

As for when the drug might be approved, FDA Commissioner Stephen Hahn has indicated that the agency is working closely with Gilead. The agency hopes to make a decision on remdesivir quickly.

Kaitin, from the Tufts Center for the Study of Drug Development, says today's FDA is better equipped than ever to approve a drug quickly.

"You still have to have a drug and still have to show that the drug works," Kaitin says. But "the FDA can work with companies to provide a greased pathway."

The 1987 approval of azidothymidine — AZT — as the first AIDS medicine, was a game-changer for the FDA, he says. The agency approved AZT without waiting for the long clinical trials required in other drug approvals. It did this on condition that the drugmaker, Burroughs Wellcome, would continue to study patients taking the drug, and report the results back to the FDA. That decision by the agency has paved the way for accelerated approval pathways for other drugs.

"The FDA has a lot more in its toolkit for moving important drugs through the process extremely fast," Kaitin says.