Accessibility links
Medical Volunteers Are Needed But Federal System For Recruiting Them Is Flawed : Shots - Health News We need more doctors, nurses and respiratory therapists to fight the coronavirus. So why isn't a federal registry for medical volunteers getting the support it needs to be effective? 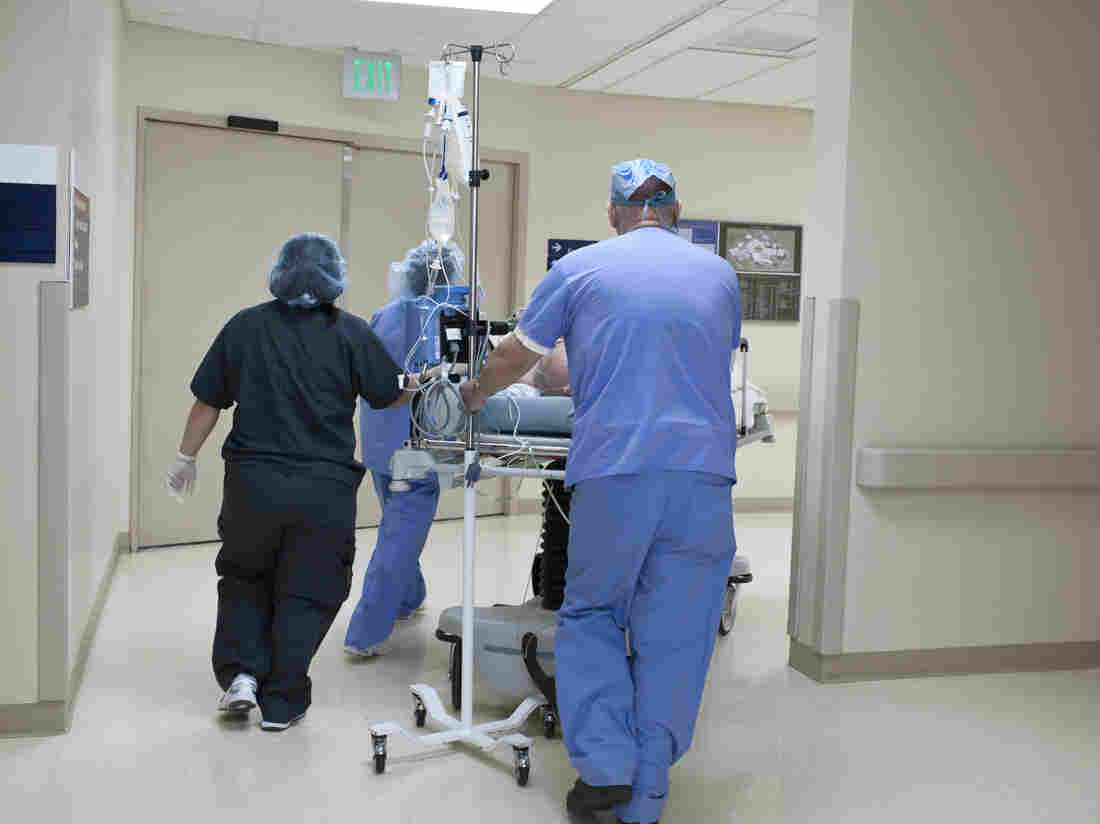 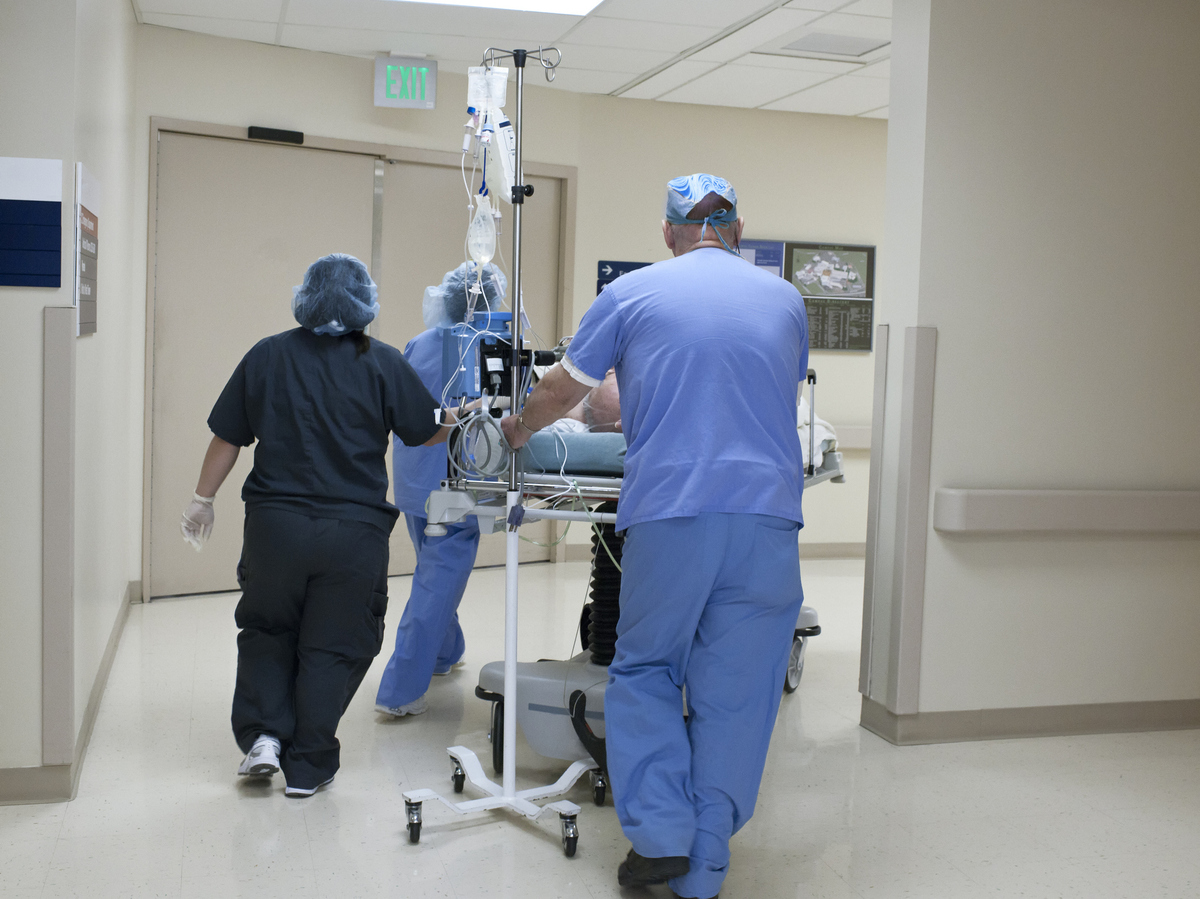 The Trump administration has done little to take advantage of an emergency system built after 9/11 to recruit volunteer doctors, nurses and other health care workers, even as hospitals scramble to find enough personnel to face a surge of coronavirus-infected patients.

The emergency system, maintained by the U.S. Department of Health and Human Services, is aimed at recruiting medical professionals who are willing to volunteer in times of disasters and verifying their medical credentials ahead of time. But its website, which is designed to link volunteers to state-level registries, is little-promoted and has a major glitch: Its drop-down menu goes nowhere for 10 states.

Federal officials need to do a better job of using what they already have to address this crisis, says Mahshid Abir, a doctor and researcher at the RAND Corporation, a California-based think tank.

"Unless people know about it, and it's used and it's advertised, no one's going to know and sign up," Abir says. "All these investments and developing tools like this and the research behind it, it's for times like this."

The federal response to the pandemic has been beset by delays and bureaucratic foul-ups, most notably in testing for the virus. The Trump administration this week moved to allow doctors to practice across state lines and recommended that hospitals put off elective surgeries — moves designed to swell the ranks of those treating the coronavirus. Meanwhile, hospitals are straining to find the staff and supplies to care for the overwhelming numbers of seriously ill COVID-19 patients expected in coming weeks.

"Every hospital in the country is thinking about backup health care workers," Redlener says. 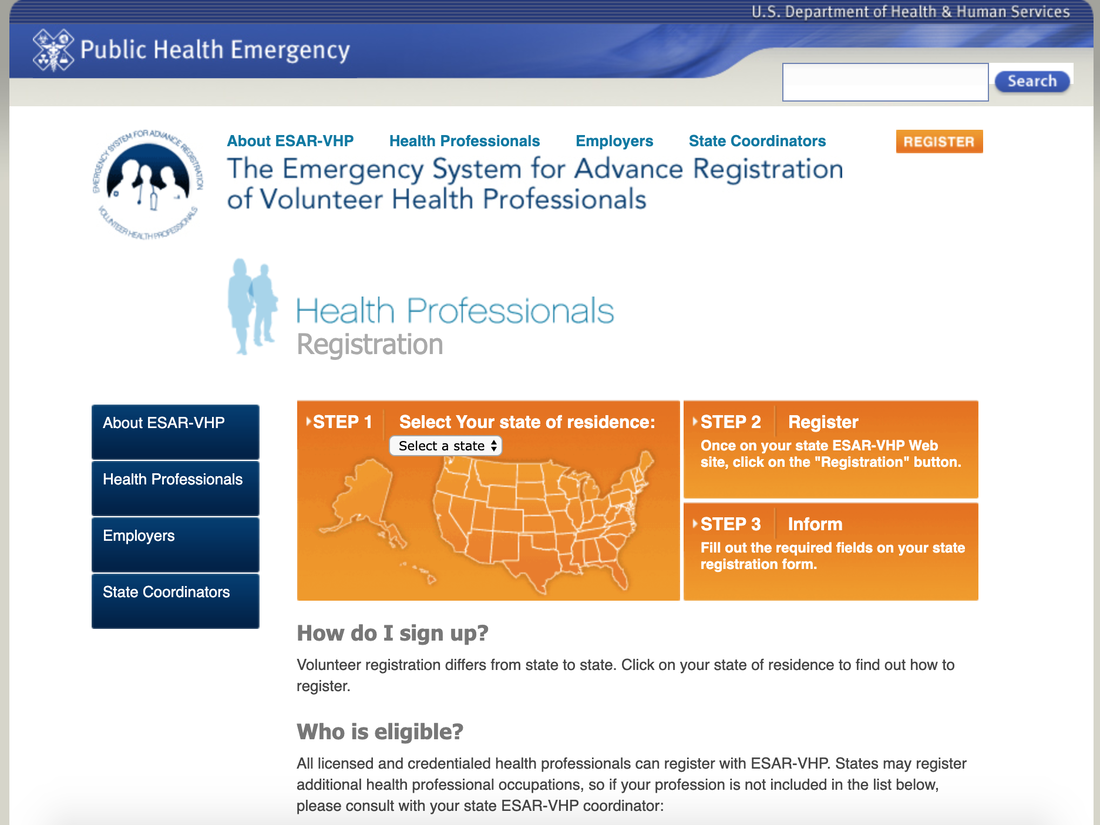 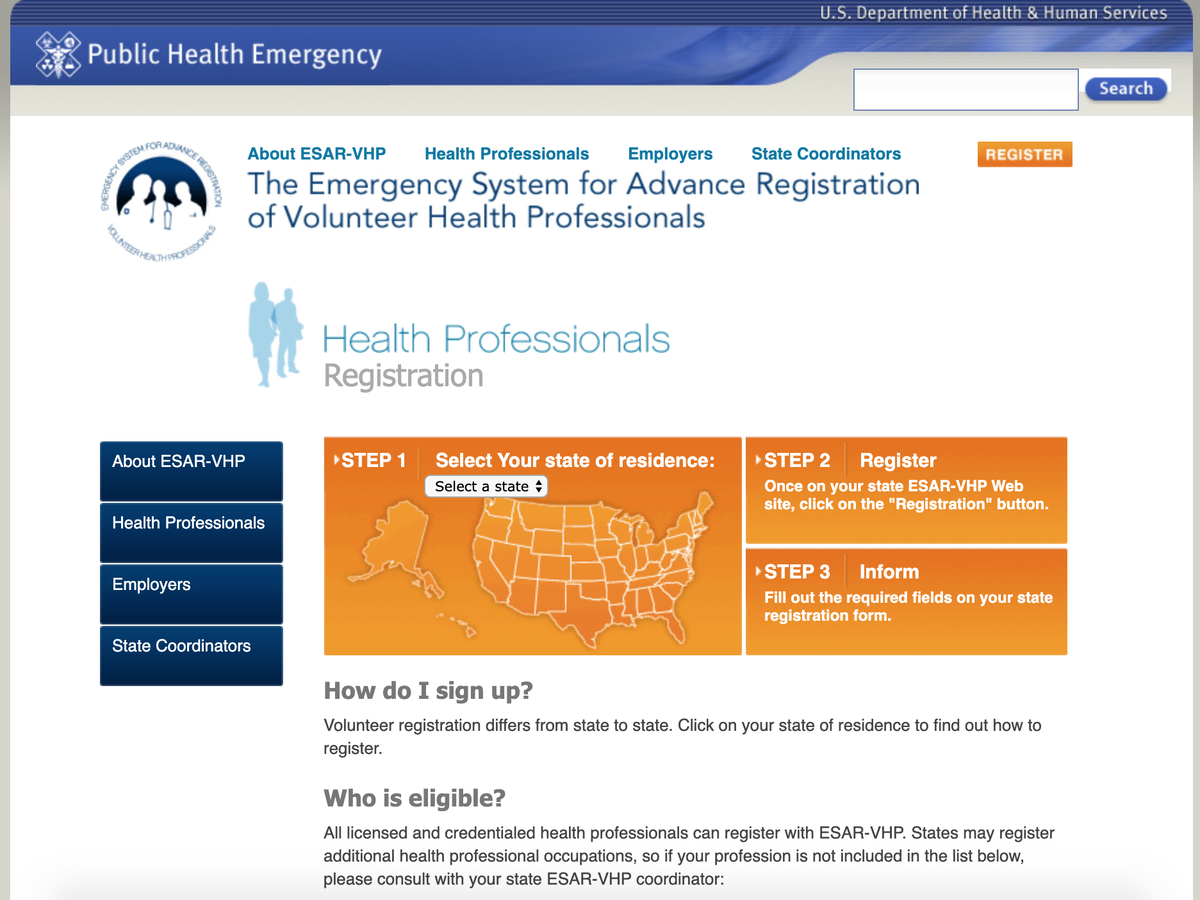 The Emergency System for the Advance Registration of Volunteer Health Professionals, is maintained by the U.S. Department of Health and Human Services. It's intended as a centralized site to recruit volunteers but has technical glitches.

U.S. Department of Health and Human Services/ Screenshot by NPR

Experts say volunteer doctors could be crucial particularly in rural and low-income areas — where medical professionals were in short supply even before the pandemic. Rural hospitals preparing for the coronavirus are worried about having enough health care workers, along with ventilators, drugs and masks, says Brock Slabach, senior vice president of the National Rural Health Association.

"We're not going into this crisis with some really extremely healthy rural hospitals and clinics," Slabach says. "We're just hoping we can get through this epidemic with them still financially intact."

And hospitals will need backup ranks of doctors and nurses even more when those on the front lines become sick themselves and are forced to quarantine. Half of the Americans exposed to the coronavirus before Feb. 26 were health care workers, according to Centers for Disease Control and Prevention data reported in a Health Affairs blog. Experts worry doctors and nurses may also stay home from work out of fear of contracting the virus.

The federal emergency system was established in the aftermath of 9/11, when doctors and nurses rushed to Ground Zero to help, but New York City officials had no quick system to prove they were qualified. The Emergency System for Advanced Registration of Volunteer Health Professionals was designed to fix that problem.

"There's a slippery slope if people just show up and say, 'Hey, I'm a doctor.' You have to validate their credentials," says Julie Casani, a North Carolina State University professor who formerly directed programs to prepare for emergencies in North Carolina and Maryland.

New Jersey now has nearly 900 COVID-19 patients. But, as of March 19, a Garden State doctor or nurse who managed to find the federal program's website would have to do additional online sleuthing to figure out how to sign up to volunteer, since links on the site are broken. So would health professionals in Arkansas, Alabama, Connecticut, Kentucky, Maryland, North Carolina, New Hampshire, Rhode Island and Tennessee.

HHS oversees the system, but each state runs its own volunteer registry as part of it. An HHS spokeswoman did not respond directly to questions about the broken links or the system's relative obscurity. She said the system verifies "volunteers' licenses, credentials, and accreditations, as well as training skills, competencies, and employment" in advance, saving "valuable time in emergency situations."

Some states are already planning to mobilize the volunteers registered with them. Virginia issued a letter to doctors asking them to sign up for the state's medical reserve corps to help prepare for the coronavirus. Maryland Gov. Larry Hogan on Monday said he was activating his state's 5,000 medical volunteers. And California is "prepared to call up our volunteers as needed," says that state's Emergency Medical Services Authority deputy director Jennifer Lim.

On Monday, I announced that we have activated the Maryland Responds Medical Reserve Corps, a force of dedicated and trained medical volunteers who are ready to assist in a public health emergency.

We are urging Marylanders to sign up at https://t.co/DqJQbL4z5V. pic.twitter.com/K5LXQwoQf6

The federal emergency system was also meant to recruit other important medical workers, including specialists experts say are crucial to weathering COVID-19: respiratory therapists, who are trained to handle ventilators, which can cause brain damage or death if used incorrectly.

"You can have all the equipment you want, but if you don't have the people that are trained to operate it, then that's not a good thing, either," says Leonard Friedman, a professor of health policy and management at George Washington University.

In Arkansas, respiratory therapist Paul Lowe says he's never heard of the federal emergency system and has not been contacted by his state to volunteer to treat coronavirus patients.

But Lowe, who directs the respiratory therapy program at a community college in Hot Springs National Park College, says a hospital emailed him recently to ask if he could graduate his 15 students a few weeks before they would have finished their clinical rotations. Lowe says he checked with the Arkansas Medical Board, which ruled out such moves.

Although the federal site's link to Arkansas is not working, the state has 1,254 registered volunteers, 27 of whom are respiratory therapists, says Danyelle McNeill, a spokeswoman for the state health department. She did not answer a question on whether state officials are aware of the broken link on the federal emergency system's site.