Accessibility links
Expanding Coronavirus Testing Is The Only Way Out Of This Mess, Experts Say : Shots - Health News The Trump administration says not everyone needs a test, but experts say a strategy of broad testing and isolating the sick is our best way to solve this crisis. 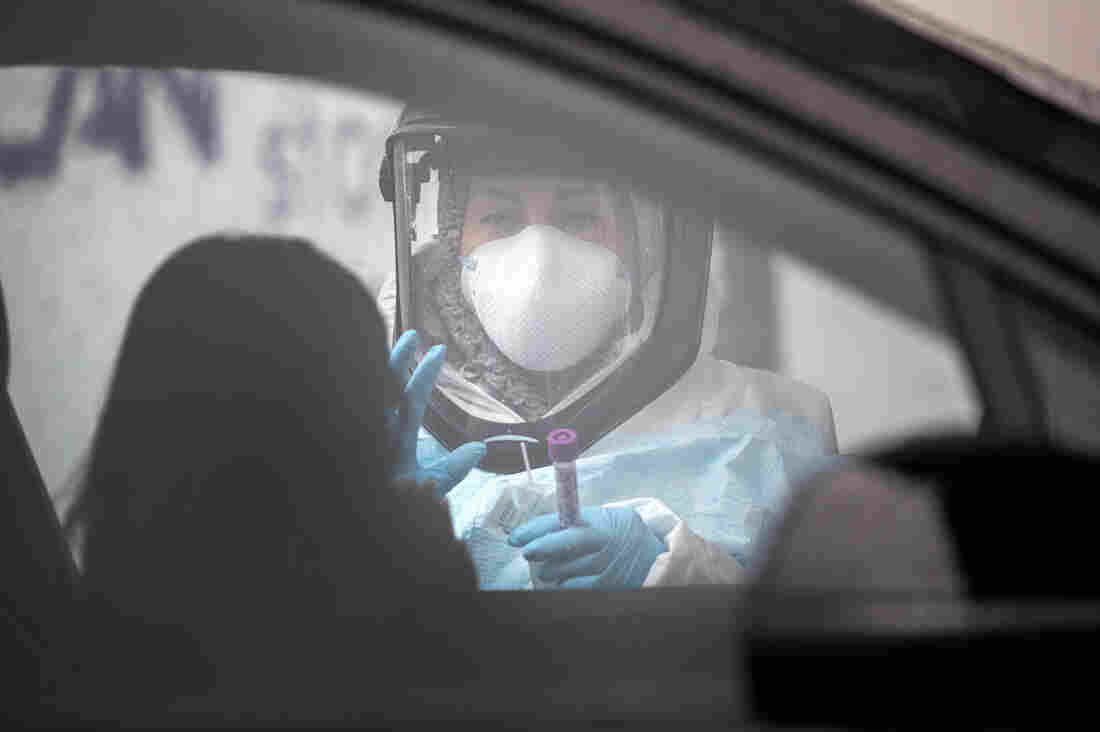 Coronavirus testing capacity has begun to expand, with drive-through testing starting up in many places. But experts warn we still need to vastly expand testing to control the outbreak. John Moore/Getty Images hide caption 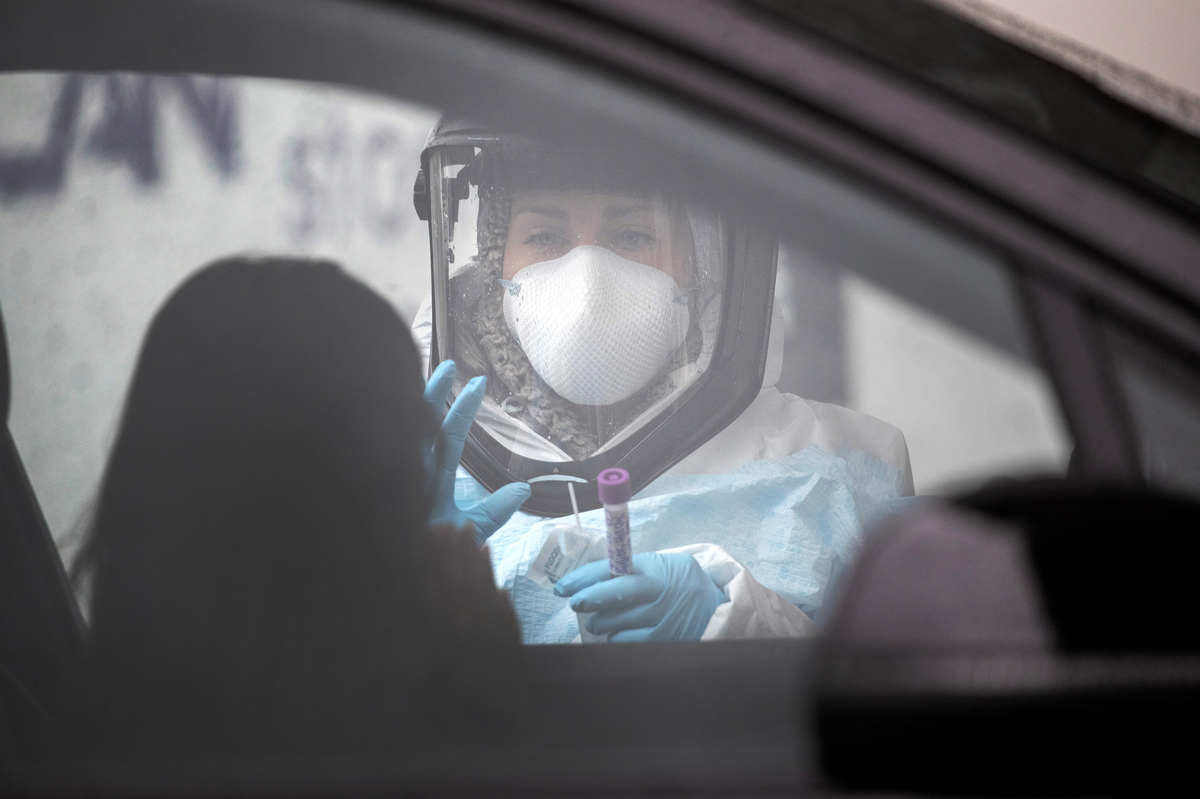 Coronavirus testing capacity has begun to expand, with drive-through testing starting up in many places. But experts warn we still need to vastly expand testing to control the outbreak.

Stay inside, don't meet with friends, don't go to work — these are the messages coming from public health officials at every level of government. But increasingly, experts say they believe those stark warnings must be augmented with another message:

If you think you might be sick, even a little sick, get tested for coronavirus.

"Everyone staying home is just a very blunt measure. That's what you say when you've got really nothing else," says Emily Gurley, an associate scientist at the Johns Hopkins Bloomberg School of Public Health. "Being able to test folks is really the linchpin in getting beyond what we're doing now."

Testing "is absolutely essential to control the epidemic," agrees Robert Gallo, director of the Institute of Human Virology at the University of Maryland School of Medicine and a co-discoverer of HIV. Gallo says that testing was a major factor in bringing the AIDS epidemic under control, and it will be needed here as well: "You make it as cheap as you can and you make it as simple as you can," he says.

Currently, the federal government's official position is that the vast majority of Americans shouldn't even bother trying to get tested. "If you don't have symptoms, you don't need a test," Vice President Pence told reporters during a White House briefing on Sunday.

Pence's statement came on the same day that Sen. Rand Paul tested positive for the coronavirus, despite having no symptoms. And a growing body of research suggests that Paul is hardly alone — asymptomatic or mildly symptomatic people are likely a key reason coronavirus continues to spread relentlessly across the globe.

Even when people become sick, the federal government only recommends testing in limited circumstances. According to official CDC guidance, testing should be prioritized to those admitted to hospitals, health care workers and those at risk for complications from the disease. Everyone else should be prepared to ride out their illness, COVID-19 or otherwise, at home.

Ashish Jha, director of the Harvard Global Health Institute, says he believes that the Trump administration has some reason to set those guidelines. Early missteps created a huge shortage of tests in the U.S. "They're dealing with a reality, which is we have far fewer tests than we need right now," he says.

In addition to the lack of tests themselves, there are also reported shortages in basic equipment such as personal protective gear and swabs. Given all that, Jha agrees that health care workers and the very ill should be getting tested most often.

But Jha and other experts say as soon as we can, we need to take the following measures:

As soon as possible, the criteria for who gets tested will need to be broadened, he says. First it should be extended to close contacts of the very ill, so that they can be quarantined and monitored. Then the tests should be given to mildly ill people to see whether they have the disease. And finally, a segment of the population should be tested at random, to look for asymptomatic spreaders. "That's the priority list, I think most experts agree," he says.

Getting there could require around 150,000 tests a day, he says. The total number of Americans tested since the crisis began in February is only 250,000, according to Pence on Sunday. Over the past week commercial labs have gone from completing around 8,000 to around 50,000 tests per day, according to data from the American Clinical Laboratory Association. That data does not include state public health departments and other institutions such as universities.

Isolate the sick and trace their contacts

Testing will be just the first step on the road to recovery, Gurley says. In South Korea, wide testing has been accompanied by isolating people who are infected and sending all of their contacts into 14-day self-quarantine. "It's that self-quarantine that will take care of people transmitting before they become ill," she says.

The South Korean effort has seen testing sites and quarantine centers spring up across the country. It has required the mobilization of industry, government and health care workers at every level. But it seems to have worked. For now, the small country has managed to hold the virus at bay and keep down deaths from the disease.

The U.S., with its large population and decentralized government, will require a far greater effort, but it's not impossible, says Jeffrey Shaman, a professor of environmental health sciences at Columbia University. "They were doing [tens of thousands] a day in South Korea," he says. "So why the hell can't we do 10 times that?"

Shaman says that there is little alternative than to build up testing. The shelter-in-place orders can't go on forever. "There are enormous economic, psychological and emotional costs associated with everybody becoming a hermit in a cave," he says. And when they're lifted, the virus could surge back again, as it appears to be doing in Hong Kong, which was initially successful in stopping its spread.

The lack of testing is already having consequences. The disease is now spreading exponentially, and Shaman warns that New York City and other American municipalities will likely be slammed in the coming weeks as an influx of sick patients flood ERs and ICUs.

"Things are definitely going to get worse before they get better," Gurley agrees. But she adds, "the sooner that we can get testing up and running, the better off we're going to be."