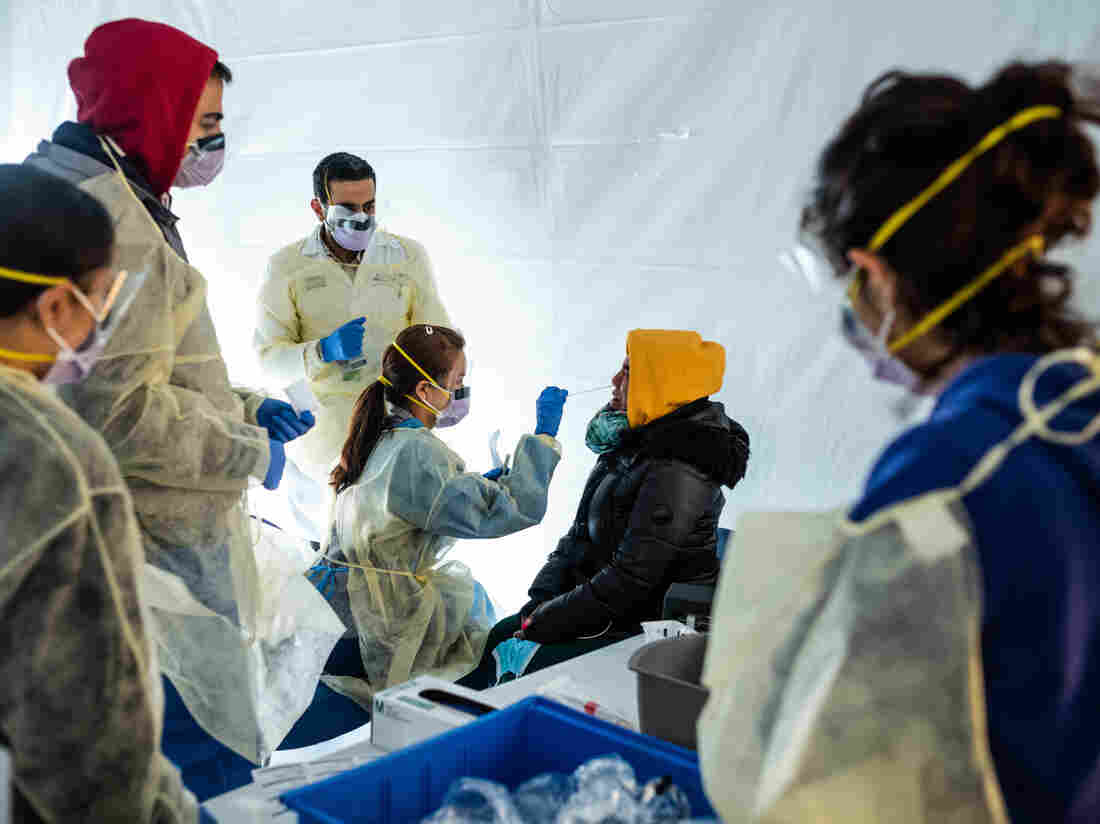 Doctors test a hospital staffer Tuesday for coronavirus, in a triage tent that's been set up outside the E.R. at St. Barnabas hospital in the Bronx. Hospital workers are at higher risk of getting COVID-19, and public health experts fear a staffing shortage in the U.S. is coming. Misha Friedman/Getty Images hide caption 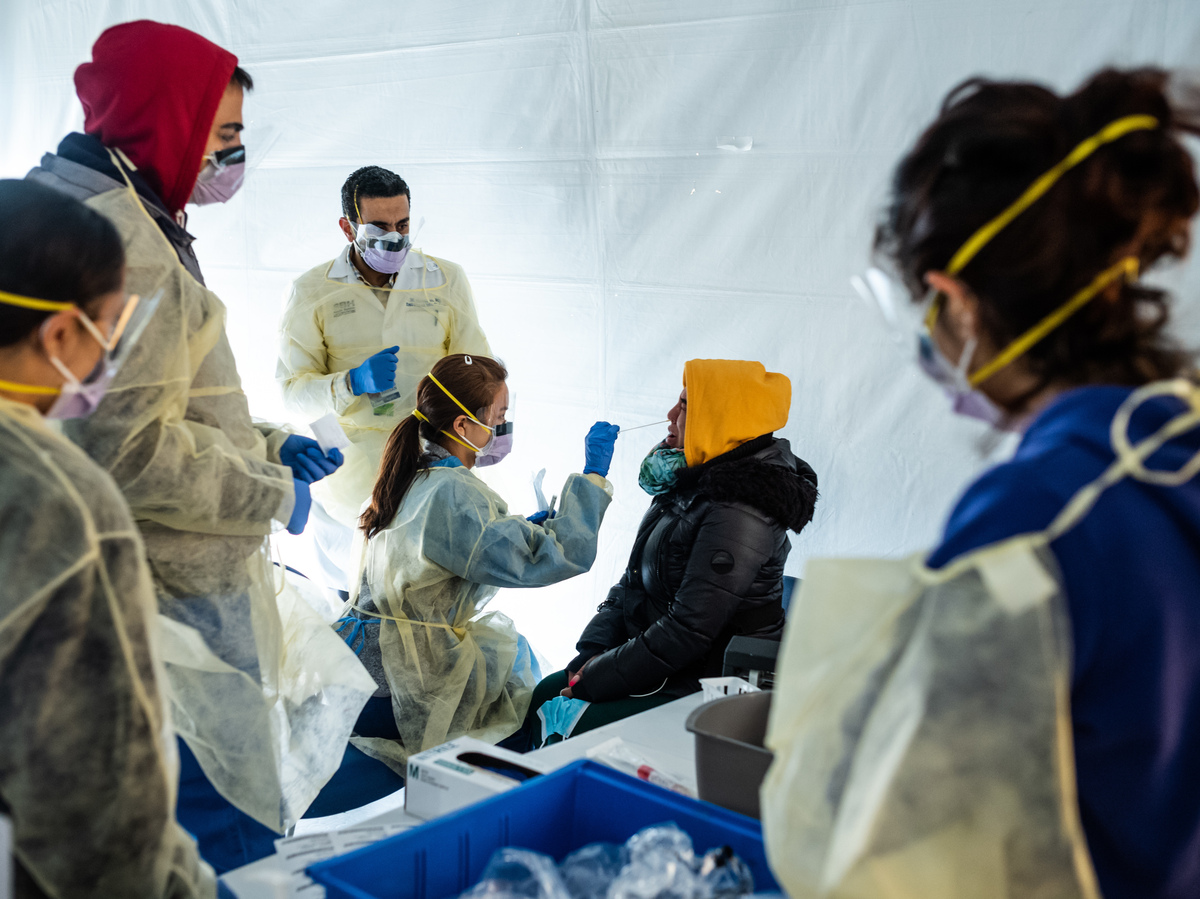 Doctors test a hospital staffer Tuesday for coronavirus, in a triage tent that's been set up outside the E.R. at St. Barnabas hospital in the Bronx. Hospital workers are at higher risk of getting COVID-19, and public health experts fear a staffing shortage in the U.S. is coming.

When Dr. Judy Salerno, who is in her 60s, got word that the New York State health department was looking for retired physicians to volunteer in the coronavirus crisis, she didn't hesitate.

"As I look to what's ahead for New York City, where I live, I'm thinking that if I can use my skills in some way that I will be helpful, I will step up," she says.

Salerno says she doesn't think of herself as a retiree — she's president of The New York Academy of Medicine, which does public health advocacy. But she is essentially retired from clinical practice.

Because of her age, Salerno is among those at higher risk of serious illness if they contract COVID-19. "But I feel that I'm healthy," she says. "I'm working full time, I have no other risk factors, so I do need to be there if needed — it's important for me."

Public health experts say the United States is in for a shortage of health care workers in many places soon, as cases of COVID-19 escalate. First, the ranks of front-line health workers will be stretched thin, as hospitals fill. And if health care workers have to scramble to care for sick patients without enough protective gear, they will get infected with the virus and fall ill, too.

"The reality is that we're facing the inevitable shortage of health care providers," says Dr. Irwin Redlener, director of the National Center for Disaster Preparedness at Columbia University. "The people that are coming into close contact — and therefore in greatest danger — are the doctors and nurses and people directly examining patients who possibly have coronavirus."

To address the coming shortage, states from Hawaii to New Hampshire are loosening their licensing rules to give those with clinical skill the ability to pitch in, such as allowing out-of-state physicians to practice right away, asking retired physicians to volunteer, and more. Most states are making these kinds of regulatory changes, according to a tracker maintained by the Federation of State Medical Boards.

Changes in state rules are just the first step. Volunteer doctors can't simply show up at a hospital ready to work, FSMB president Dr. Humayan Chaudhry explains. Hospitals and health systems need to verify that physicians have the training and licenses they claim to have. "Sometimes that's a laborious process," he says. "Sometimes it takes weeks to complete."

To help speed the process along, Chaudhry says, the Federation of State Medical Boards is offering free access to its physician database, which allows hospitals to quickly verify "where the physicians went to medical school, where they trained, whether or not they've been licensed in one or more jurisdictions, whether they've ever been disciplined, or whether or not they are specially certified by either the American Medical Specialties or the American Osteopathic Association."

When Salerno wanted to sign up for clinical service in New York, she filled out a form the state Department of Health had created to collect information from volunteers. She was told quickly that her credentials had been verified.

Now, every day, she says, "there's a dashboard and I sign in to see what's needed and if any of my skills match what people are asking for in terms of health personnel."

Downside of including retirees

Although the idea of recruiting retired physicians and nurses has been a fairly popular move among states so far, Redlener thinks it's a bad idea for the front lines of medical care.

"If you start calling in retired doctors, nurses, whatever — these are de facto people at high risk," he says. "They're older — that's why they're retired. Many of them will have serious medical risks on top of that. And if we're going to put them anywhere near the front lines of this particular pandemic crisis, we are endangering some very high-risk people."

In his conversations with public health officials exploring these options, Redlener says, "all avenues are being explored." Nurse practitioners and physicians assistants can also work on the front lines if they're willing, he says. And public health officials are also talking about retraining specialists like plastic surgeons and dermatologists so that they could help care for COVID-19 patients. Dentists might be recruited and retrained, too, he adds.

One idea Redlener favors is revisiting the rules about internationally trained physicians who are living in the U.S. "One of the things that I have been thinking and talking about is eliminating — for now — the regulation that you have to repeat your residency in order to practice in the U.S.," he says. "These people are ready to go, and my experience with them is they're very talented, very well-trained and coming from all different countries. That's a pool we should tap."

He adds, "Whatever it is that we do, we should [recognize] that we're putting people in very high risk situations with respect to the coronavirus."

How medical students can help

There's another pool of people at the very start of their medical careers who would like to help out: medical students.

"They're obviously in the process of learning how to be practicing physicians, but there's no reason why they can't also be helpful in the current situation," says Chaundhry of FSMB. He says most third- and fourth-year medical students were recently pulled from hospital rotations because of the dearth of personal protective equipment and the risk of exposure.

"We're working with the national organizations that oversee medical students — both the Association of American Medical Colleges and the American Association of Colleges of Osteopathic Medicine — to make sure that our next generation of physicians who are currently in training are able to come back to the hospitals soon to help out in any way that they can."

Chaudhry says some schools, at least, are considering graduating senior medical students early. "We are beginning to have some early conversations about the current duration of medical school training, the current duration of specialty training for physicians — that's something that we may need to look at at some point, " he says. "We are beginning to have those conversations, because nobody knows what the future may hold."

With most med students now sidelined from the hospital, many have been brainstorming ways they can help immediately. Some med students at Harvard, for example, are making infographics and explanatory videos for the general public, which they share on instagram. And at the University of California, San Francisco, students have held mask drives for local hospitals.

Palak Patel is a fourth-year medical student at Midwestern University. Inspired by medical students at the University of Minnesota, Patel organized, via google-forms, a med student volunteer sign-up program in Chicago and its suburbs.

Some of the things Patel and her peers are volunteering to do make use of their medical training — like fielding calls from patients at several clinics that have been completely inundated, and taking basic medical histories from patients over the phone. But Patel says some med students are also babysitting for hospital workers whose kids are now out of school, or doing their grocery shopping.

Patel says she's been delighted with the response from her fellow students. "I've been actually overwhelmed. We've had more than 100 volunteers sign up in 72 hours — my email was just blowing up," she says, and laughs.

"We hope that the situation doesn't worsen," Patel says. "But if it does, we're hoping that we can get more and more involved."