Accessibility links
Why A CPAP Machine Isn't A Good Ventilator Alternative For COVID-19 : Shots - Health News Doctors say the machine that helps some people with sleep apnea keep their airway open at night won't be enough to help an ill COVID-19 patient breathe and could spread the coronavirus to bystanders. 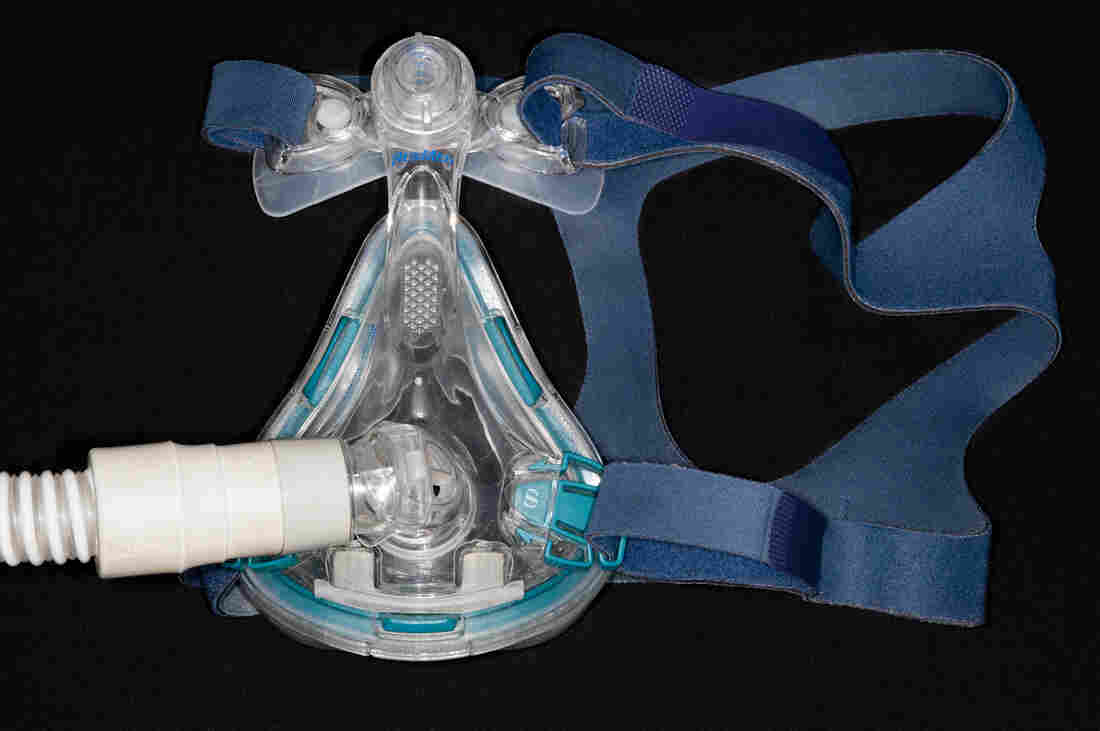 The mouthpiece of a CPAP (continuous positive airway pressure) device delivers enough pressurized air to keep the breathing passage of someone who has obstructive sleep apnea open throughout the night. Dr P. Marazzi/Science Source hide caption

The limited supply of ventilators is one of the chief concerns facing hospitals as they prepare for more COVID-19 cases. In Italy, where hospitals have been overwhelmed with patients in respiratory failure, doctors have had to make difficult life-or-death decisions about who gets a ventilator and who does not.

In the U.S., emergency plans developed by states for a shortage of ventilators include using positive airway pressure machines — like those used to treat sleep apnea — to help hospitalized people with less severe breathing issues.

While that measure could stretch the supply of ventilators and save lives, it has a major drawback. Officials and scientists have known for years that when used with a face mask, such alternative devices can possibly increase the spread of infectious disease by aerosolizing the virus, whether used in the hospital or at home.

Indeed, that very scenario may have contributed to the spread of COVID-19 within a Washington state nursing home that became ground zero in the United States. First responders called to the Life Care Center of Kirkland starting Feb. 24 initially used positive airway pressure machines, often known as CPAPs, to treat residents before it was known the patients were infected with COVID-19.

"It's best practice for us for people with respiratory illnesses," said Jim Whitney, medical services administrator for the Redmond Fire Department, whose crews responded to the nursing home's 911 calls. "We had no idea that we potentially had COVID patients there."

First Responders Are 'Trying To Stay Ahead' Of Coronavirus

It was only later that King County public health officials advised Redmond Fire and other first responders in the region not to use those machines for patients suspected of having COVID-19 infections. Whitney said responders were using the machines with specialized filters, which can reduce the amount of virus released. But county public health authorities recommend that first responders avoid using CPAP machines altogether. Redmond Fire has now discontinued use of CPAPs for COVID patients.

"It's truly out of an abundance of caution for our people and for the community that we put it on the back shelf, unless we can confirm it was the best use for our patient," Whitney said.

The misstep represents a classic example of how the health care system is playing catch-up in its effort to deal with the rapidly escalating pandemic, and how critical information about combating the novel coronavirus can be slow to reach those on the front lines.

The American Society of Anesthesiologists issued guidance on Feb. 23 discouraging CPAP use in COVID-19 patients — advice largely informed by experience with the SARS epidemic in 2003. Studies dating to 2003 suggest that such devices can pump viruses into the air, potentially increasing the spread of a contagious disease.

During the SARS outbreak in Toronto, half of all SARS cases, including three deaths, occurred among health care workers. Some of the greatest risk arose when doctors and nurses were exposed to aerosolized virus through the use of positive airway pressure machines or other respiratory therapy devices.

The experiences from the Life Care Center of Kirkland now have doctors rethinking their strategies when faced with ventilator shortages, and their advice to first responders about using CPAP machines in the field.

"In general, we're just telling them not to use it," said Dr. Comilla Sasson, an associate clinical professor of emergency medicine at the University of Colorado School of Medicine. "Because we are concerned about community spread, and we have to assume that anybody with respiratory distress is a COVID patient."

And doctors even suggest that those who use the devices at home should take precautions to prevent infecting others.

How CPAPs spread the coronavirus

Ventilators are machines that push air in and out of the lungs through tubes inserted down patients' airways when they have trouble breathing on their own. The machines allow health care providers to fine-tune the volume of air supplied, the rate of breathing, the amount of oxygen and the pressure as needed.

Both hospital and home versions of positive airway pressure machines are much simpler devices that use high pressure to push air into the airway, generally through a face mask. Continuous positive airway pressure machines, known as CPAPs, provide a continuous flow of air at a constant pressure. More advanced bilevel versions, called BiPAPs, which can be used at home or in health care facilities, push the air in, but then lower the pressure to allow the air to be exhaled.

The key issue, Finigan said, is how the device connects to the patient. Ventilators require a breathing tube and operate as closed systems with a filter that traps any pathogens. Face masks generally used on CPAPs or BiPAPs allow air to escape, pumping the virus into the surroundings and potentially infecting other patients, caregivers or anyone nearby.

Positive airway pressure machines are often the first step in the standard algorithm for hospitals or emergency personnel when treating people with certain breathing problems. Finigan said in patients with standard respiratory failure, doctors might first see if patients can get by on high-flow nasal oxygen or on BiPAP machines to avoid intubation and sedation.

"If your hope is that maybe this might be a temporizing measure that might hold them from hours to a couple of days, you'll try to use the mask," Finigan said. "There are some situations where somebody is breathing OK, but is just having trouble getting enough oxygen. Theoretically, a CPAP might be enough to get them enough oxygen. But, again, doing it with a mask is more likely to generate an aerosol and create an infectious problem."

Dr. Jeff Sippel, a critical care specialist at UCHealth, based in Aurora, Colo., said BiPAPs could be used for COVID-19 in a closed system without a mask, if patients are first fitted with a breathing tube.

"The hardware actually fits," he said.

The jury-rigged devices could then be used for less severe COVID-19 patients, as well as for other patients who might not be first in line for a ventilator. More severe cases would still require full mechanical breathing like that provided by a ventilator, and it's unlikely that BiPAP could fully make up for the undersupply of ventilators in a full-blown outbreak.

Some doctors have suggested that governors should put out a call for people with spare BiPAP machines in their homes to donate them to hospitals. But Sippel said hospitals have other steps they would take first.

Doctors are investigating whether they can connect multiple patients' breathing tubes to a single ventilator. At UCHealth, for example, the hospitals have close to 700 ventilators, Sippel said, and could potentially use roughly a fifth to ventilate two people at the same time.

This week, the Food and Drug Administration provided guidance that allows hospitals to modify respiratory devices, including ventilators, CPAPs and BiPAPs, during the public health emergency, as long as they take steps to prevent aerosolization of the virus.

What about CPAPs for home use?

Dr. Christopher Winter, a sleep medicine specialist in Charlottesville, Va., said people who rely on CPAP machines at home for sleep apnea can continue to use them as long as they have no symptoms of COVID-19. But they should speak to their physicians if they develop upper respiratory symptoms, to help determine whether they should continue.

Winter is working on a guide with — and for — other clinicians to help them decide when patients infected with COVID-19 should keep using their CPAP machines.

Beyond Annoying: How To Identify The Sounds Of A Troublesome Snore

"When does the balance of shooting it all through your house outweigh the negatives to the individual by not using it?" Winter asked.

Anybody who uses a CPAP machine at home, he said, may want to sleep in a separate room from loved ones to avoid infecting them. That's true even if the person with apnea doesn't have any COVID-19 symptoms. And if patients are advised by their doctors to stop using their machines, Winter says, they should also avoid driving, because they may be sleep-deprived.

In most parts of the U.S., the need for extra breathing devices in health care facilities is not yet critical. But hospitals are bracing for a surge in patients who will need respiratory support.

"This is getting real now," said Dr. Matthew Wynia, an internist and bioethicist who has been working on UCHealth's COVID-19 plans. "We are about to be slammed."