Accessibility links
Why It Takes So Long To Get Most COVID-19 Test Results : Shots - Health News Even many symptomatic patients and exposed health workers who are able to get a COVID-19 test must wait nearly a week to get results. Others get results in hours. Here's why it varies so much. 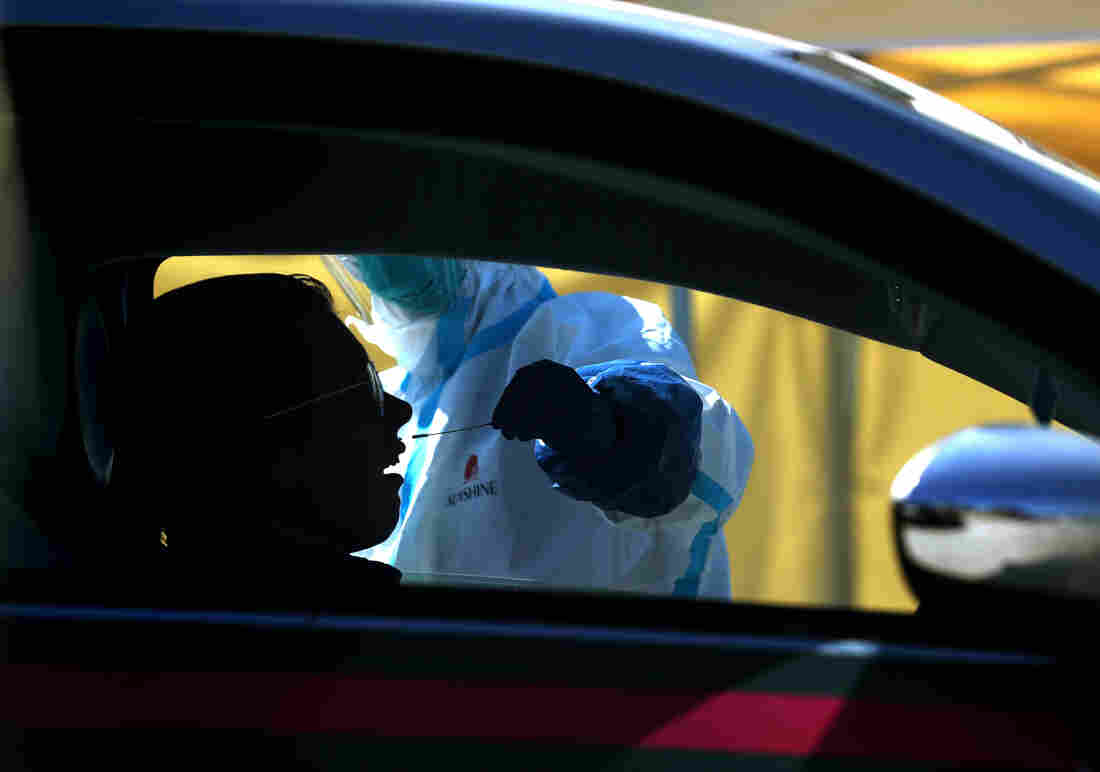 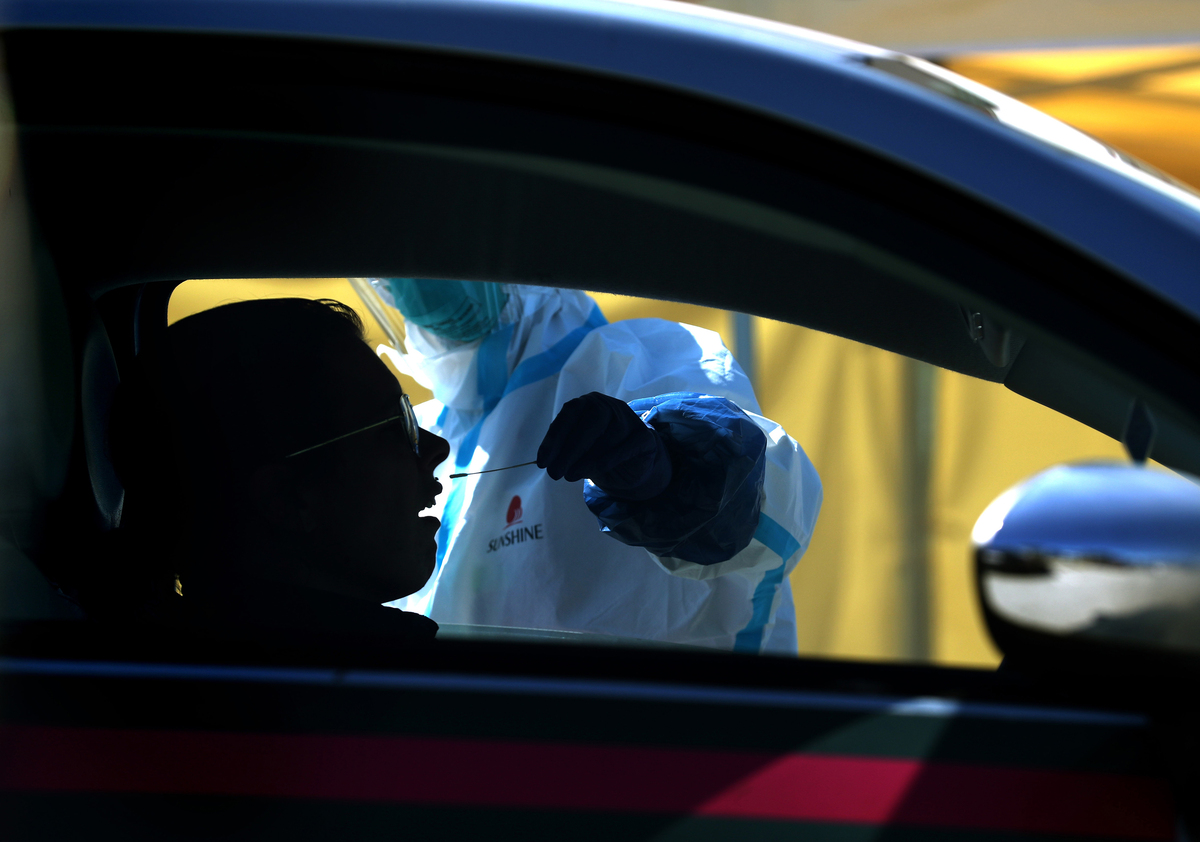 After an initial verbal screening, one driver at a time gets a COVID-19 nasal swab test from a garbed health worker at a drive-up station in Daly City, Calif.

After a slow start, testing for COVID-19 has begun to ramp up in recent weeks. Giant commercial labs have jumped into the effort, drive-up testing sites have been established in some places, and new types of tests have been approved under emergency rules set by the Food and Drug Administration.

But even for people who are able to get tested (and there's still a big lag in testing ability in hot spots across the U.S.), there can be a frustratingly long wait for results — not just hours, but often days. Even Sen. Rand Paul, R-Ky., didn't get his positive test results for six days and has been criticized for not self-quarantining during that time.

We asked experts to help explain why the turnaround time for results can vary widely — from hours to days or even a week — and how that might be changing.

It's a multistep process

First, a sample is taken from a patient's nose or throat, using a special swab. That swab goes into a tube and is sent to a lab. Some large hospitals have on-site molecular test labs, but most samples are sent to outside laboratories for processing. More on that later.

That transit time usually runs about 24 hours, but it could be longer, depending on how far the hospital is from the processing laboratory.

Once at the lab, the specimen is processed, which means lab workers extract the virus's RNA, the molecule that helps regulate genes.

"That step of cleaning — the RNA extraction step — is one limiting factor," says Cathie Klapperich, vice chair of the department of biomedical engineering at Boston University. "Only the very biggest labs have automated ways of extracting RNA from a sample and doing it quickly."

After the RNA is extracted, technicians also must carefully mix special chemicals with each sample and run those combinations in a machine for analysis, a process called polymerase chain reaction, which can detect whether the sample is positive or negative for COVID. 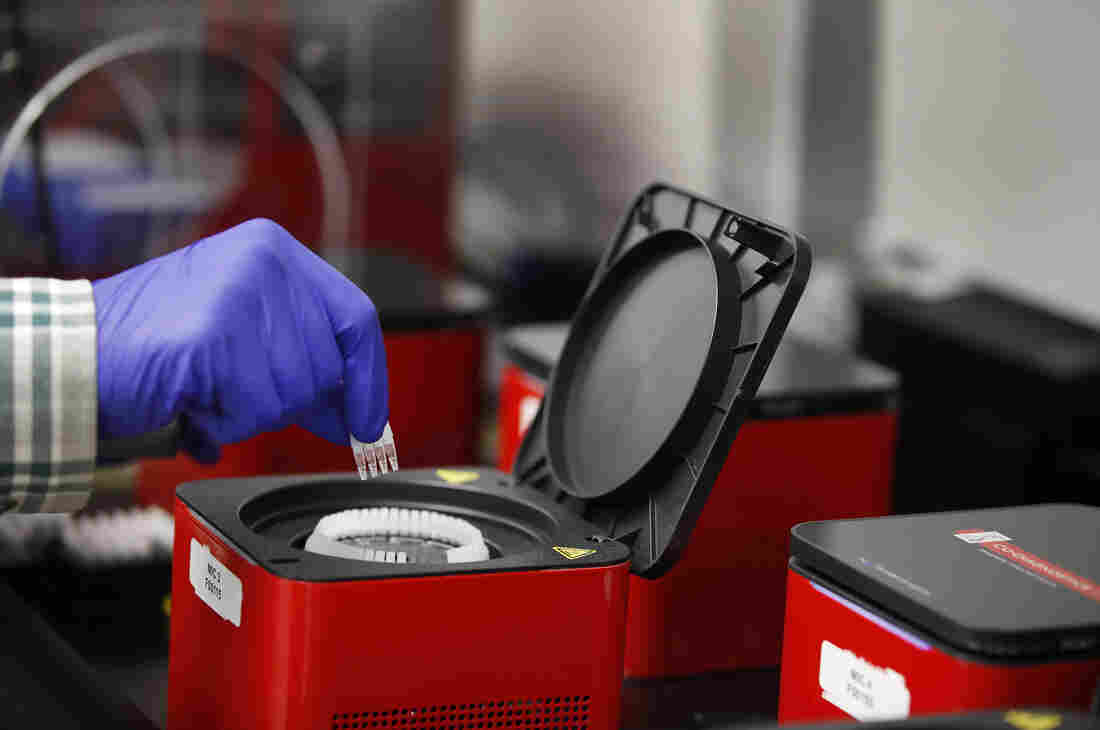 Some labs have larger staffs and more machines, so they can process more tests at a time than others. But even for those labs, as demand grows, so does the backlog.

Capacity is expanding, but not fast enough

Initially, only a few public health labs and the federal Centers for Disease Control and Prevention processed COVID-19 tests. Problems with the first CDC test kits also led to delays.

Now the CDC has a better kit, and 94 public health labs across the country do COVID-19 testing, says Wroblewski.

But those labs can't possibly do all that's needed. In normal times, their main function is regular public health surveillance — detecting more common threats such as outbreaks of measles or monitoring seasonal influenza — "but not to do diagnostic testing of the magnitude that is required in this response," she says.

Large commercial labs like those run by companies such as Quest Diagnostics and LabCorp were given the go-ahead by the FDA late last month to start testing, too.

The FDA has said it won't stop certain private labs and universities and diagnostic companies from developing their own test kits. Labs at some big-name hospital systems, such as AdventHealth, the Cleveland Clinic and the University of Washington, are among those doing this.

In addition, the FDA has approved more than a dozen testing kits by various manufacturers or labs under special emergency rules designed to speed the process. Those include tests by Quest Diagnostics, LabCorp, Roche, Quidel Corp. and others. The kits are used in PCR machines, either in hospital labs or large commercial labs.

"A chief medical officer on the East Coast said that, up until two days ago, on average, it was taking 72 hours to get results," says Susan Van Meter, executive director of AdvaMedDx, a division of the Advanced Medical Technology Association, a device and diagnostics industry trade group. "That will get better as our member companies come on the market."

Even so, supply is not keeping up with demand, Roche CEO Severin Schwan told CNBC on Monday. Roche won the first approval from the FDA for a test kit under emergency rules, and it has delivered more than 400,000 kits so far.

"Demand continues to be much higher than supply," Schwan told CNBC. "So we are glad that overall capacity is increasing, but the reality is that broad-based testing is not yet possible."

How many tests can be done at a time?

That varies. Large commercial labs can do a lot. LabCorp, for example, says it is processing 20,000 tests a day — and hopes to do more soon. Other test kit makers and labs are also ramping up capacity.

Smaller labs — such as molecular testing labs at some hospitals — can do far fewer per day but get results to patients faster because they save on transit time.

Still, it's usually only large academic medical centers and some health systems that have their own molecular testing labs, which require complex equipment.

One of those is Medstar Georgetown University Hospital in Washington, D.C.

"From beginning to results can take five to six hours," says Joeffrey Chahine, technical director for the molecular pathology division there.

Even at such hospitals, the tests are often prioritized for patients who have been admitted and staff who might have been exposed to COVID-19, says Chahine. His lab can process 93 samples at a time and run a few cycles a day — up to 279 tests per day, he says. 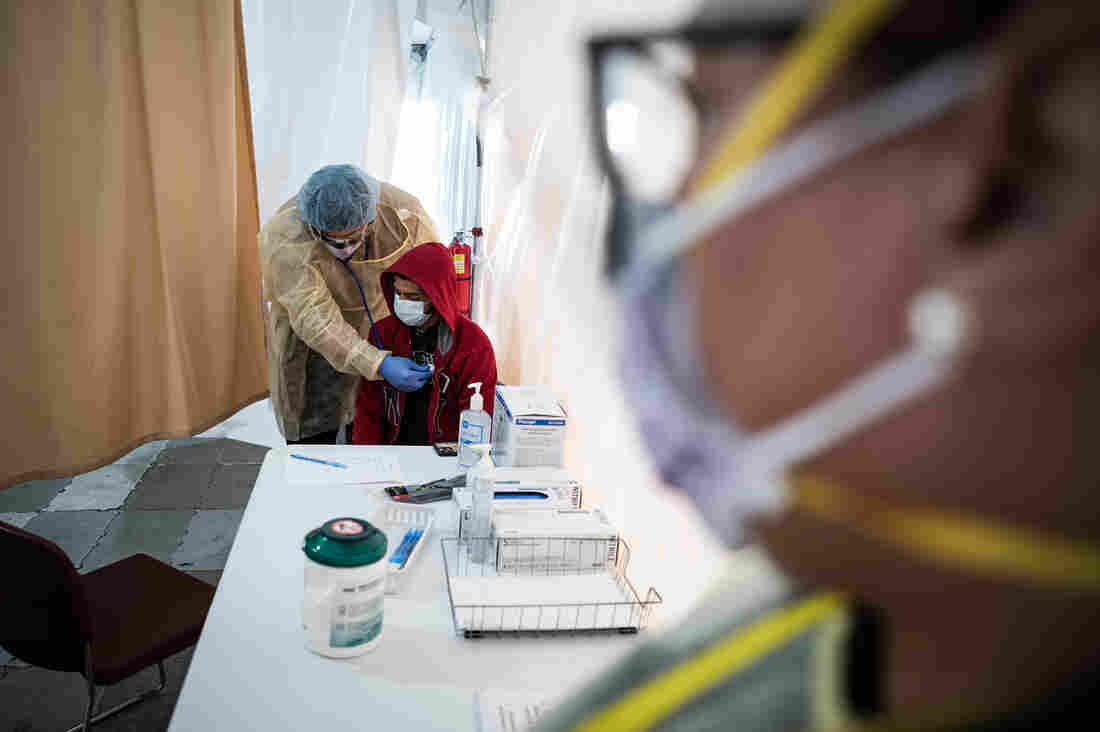 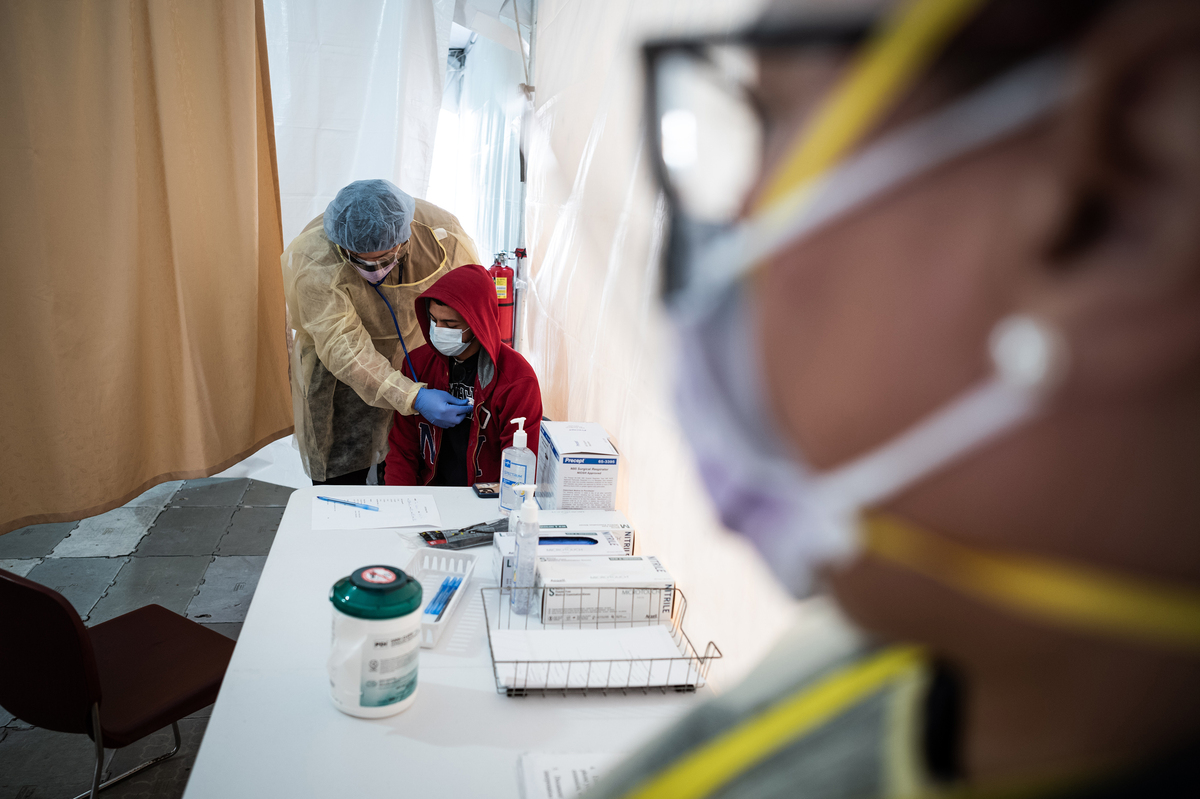 A doctor examines Juan Vasquez as part of a COVID-19 check inside a testing tent outside the emergency department at St. Barnabas Hospital in New York City last week.

But even hospitals with this ability are generally "not testing from their outpatient centers or the ER," he says. In other words, the in-house labs aren't running tests from walk-in patients. Those tests are sent to large outside labs "so as not to overwhelm the hospital lab."

While those outside labs have large staffs, "the demand is so high that these outpatient clinics and ERs say the turnaround time can be four to seven business days," Chahine says.

As the worldwide demand for testing has grown, so, too, have shortages of the chemical agents used in the test kits, the swabs used to get the samples, and the protective masks and gear used by health workers taking the samples.

"There is an inadequate supply of so many things associated with testing," says Wroblewski, which is why her group, along with officials in states including New York and cities including Los Angeles, recommend prioritizing who should be tested for COVID-19.

At the front of the line, she says, should be health care workers and first responders; older adults who have symptoms, especially those living in nursing homes or assisted living residences; and people who may have other illnesses that would be treated differently if they were infected.

Bottom line: Prioritizing who is tested will help speed the turnaround time for getting results to people in these circumstances and reduce their risk of spreading the illness.

Still, urgent shortages of some of the chemicals needed to process the tests are hampering efforts to test health care workers, including at hospitals such as SUNY Downstate medical center in hard-hit New York.

Looking forward, companies are working on quicker tests. The FDA in recent days has approved tests from two companies that promise results in 45 minutes or less, but those likely will be available only in hospitals that have special equipment to run them. One of those companies, Cepheid of Sunnyvale, Calif., says about 5,000 U.S. hospitals already have the equipment needed to process these tests. Both firms say they will ship to the hospitals soon but have given few specifics on quantity or timing.

But many public health officials say primary care doctors and clinics need a truly rapid test they can use in their offices — one like the tests already in use for influenza or strep throat.

A number of companies are moving in that direction. Late Friday, for instance, Abbott Laboratories announced that the FDA has given emergency use authorization for the company's rapid, point-of-care test, which can deliver positive results in as little as five minutes and negative results in 13.

The tests are processed on a small device already installed in thousands of medical offices, ERs, urgent care clinics and other settings. Abbott said it will begin next week to make 50,000 tests available per day.

"That's going to make a meaningful difference," says Van Meter at AdvaMedDx, who believes the rapid tests are a key additional piece in the continuum of available testing.

Even though lab-based PCR tests, which are done at large labs and academic medical centers can take several hours to produce a result, the machines used can test high numbers of cases all at once. The rapid test by Abbott — and other, similar tests now under development — do far fewer at a time, but deliver results much faster.

"This can be provided in a doctor's office or an ER, helping to triage patients who are waiting to get in," says Van Meter. "It's a very fine complement to the testing that exists."